Sportsfreak Trait, the Bro without Broing 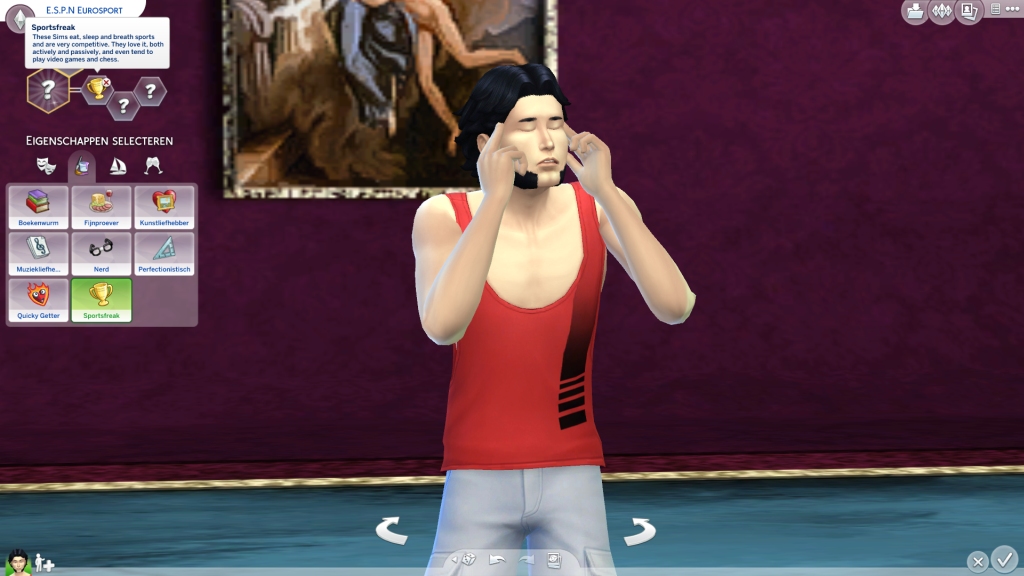 178 Thanks  Thanks     37 Favourited
The Sportsfreaks loves sports, both on television and being active in training, sees competition in anything and always wants to win. I mean, anything: not just sports, but he wants to beat others in chess and gaming as well. Actively sporting doesn't stop with swimming, jogging and using sports equipment either, the sportsfreaks likes to fish, too. It sounds logical that all these related skills (fitness,logic, gaming and fishing) are increased at a higher rate than average, with fitness at a much higher rate (1.5) than the rest, because that's the most important part. Although, the sportsfreak is mostly interested in the Incredible Sports Game over other games, due to the fact it's more related to his interests and preferences than some other games.

Being obsessed with sports, training and competition means less time for romance and dating, making it harder for these Sims to gain and maintain romantic relationships. Unlike friendships, they are easier to gain and stay stronger over a longer period of time, because of the common interests between these Sims. The needs infected sound pretty clear: fun increases and decays at the same rate as fitness skilling. Social is slightly more increased than other needs, both in decay and increasing.

Because it's basically a merger and comprehensived version of the bro and active traits, so the whims are related to these two traits plus playing chess, fishing, (online) gaming and other forms of competition, like the shoe horse throwing competition. But I excluded these silly broish interactions, because these are horribly childish and not suitable for teens and adults! It speaks for itself that energized is the default emotion for Sportsfreaks, with no blocked emotions.

Additional Credits:
- The Sims 4 Buff and Trait Factory of Zerbu to create the trait
- Kuree's S4PE to export it to the game and make it playable
- IrfanView for resizing the screenshot
- Mayasims for her CAS Background: http://modthesims.info/download.php?t=554256
- Credits to people who see the sports hint in the screen

Need more information?
Back to download view
11 Comments / Replies (Who?)