by Bigsimsfan12 Posted 12th Oct 2015 at 9:32 AM - Updated 24th Jan 2016 at 12:53 AM by Bigsimsfan12
8 Comments / replies (Who?) - 3 Feedback Posts, 5 Thanks Posts
This is a Maxis Recolour which means that it is a recolour of an item that already exists in your game. Please check the Expansion pack requirements to see which game pack it recolours.
Edit: I've just noticed that one of the PT's wears some lipstick from Nightlife, so I've added that as a requirement. So sorry!

Have you ever looked at the sims that appear on family trees in premade hoods, and think "Why did they put so much effort into these faces but then use bland faces for their living descendants?" - because I did! So when I needed multiple pollination technicians and decided I didn't want to use custom face templates in my megahood (I plan on playing until there's only 1 sim left that is a combination of all sims - so adding in new genetics is basically cheating in my game), I thought "hey, there's a bunch of unused awesome face templates!"

I pitched this idea to Jojoa777, we chose around 14 sims we thought were interesting and eventually narrowed them down to about 8. Then I chose the 4 I wanted to turn into PTs. The names come from various aliens in Sims games.

Before meeting the PTs, here is a little information you NEED to know about Multi-PT mods:
- This makes it so that instead of Pollination Technician (the alien that usually impregnates your sims), you will get one of 4 PTs.
- Do NOT remove the files from your game once adding them. If you no longer want to use them, get rid of the template file but do not remove the sims themselves.
- Place all files into your downloads folder for it to work
- Do not teleport these sims to your lot or use these sims in any way that the game does not intend.
Simple enough, right?

Emperor Xizzle II:
Emperor Xizzle II was originally the most powerful ruler of an unknown planet beyond the stars, everything was going good for him until an unknown relative knocked him unconscious and threw him on one of the Pollination Technician ships on their mission to Earth to pollinate sims. He keeps telling the other PTs that he's royalty, but they don't believe him. Knowing he'll never see his planet again, he has adjusted to life as a pollination technician.
Face template: Henry Anjou
Named after: Emperor Xizzle
Extracted from Marka93's Beginning of Veronaville with permission (You do not need this for them to work)

Pollination Technician XX-XX:
Pollination Technician XX-XX, grew up with her twin brother, XY-XY. She was originally a Birth Queen, but after never finding a Colony Drone to call her own, she got demoted to PT. She's still pretty irritated by that, and often takes out her anger on sims she abducts by implanting her alien spawn in them.
Face template: Calpurnia Caesar
Named after: XY-XY Smith
Extracted from Marka93's 'Beginning of Veronaville' with permission (This Calpurnia does not have the face glitch the one in the original game has) 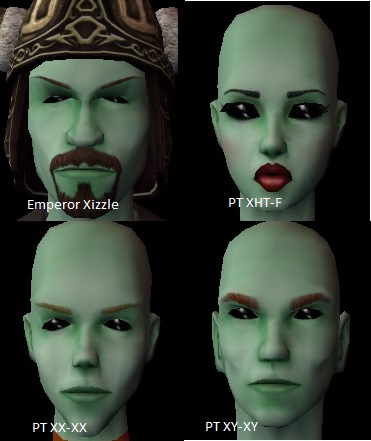 I've tested them out on both my games and they work fine, and produce a collection of very interesting little babies (I was actually surprised by how bland in comparison the offspring below are)
To show you possible offspring, I've made 2 poor unsuspecting sims - one with face 1 and one with face 2 (being that those are the 'most popular' faces) and got them abducted by aliens as many times as it took to get 1 off each parent (I know it may seem like you only ever get 1 PT sometimes, but trust me there's a 1/4 chance of each of them)
Here are the results: 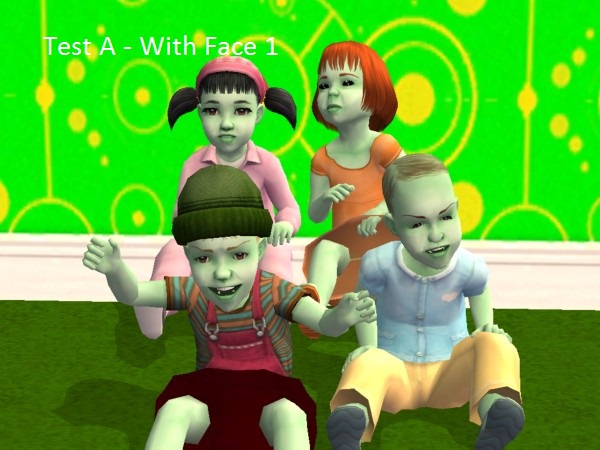 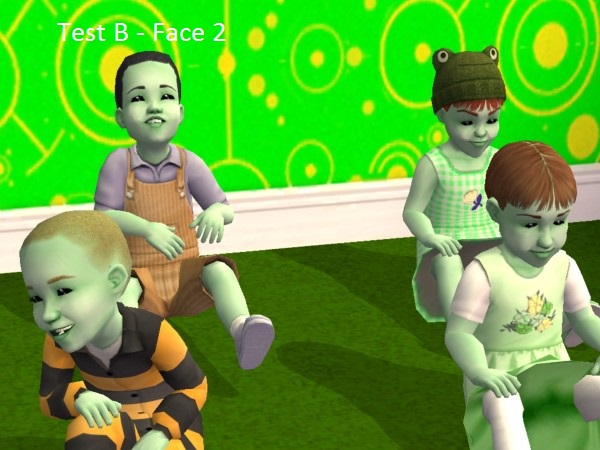 
If you feel like uploading pictures of the babies in picture threads, please tag me in them because I'd love to see what they turn out like!

Additional Credits:
Jojoa777 - mainly for letting me spam her inbox constantly with ideas
A big thank you to Marka93 - for giving me links to tutorials, as well as letting me use his sims in this upload
Simagroop - for this tutorial: https://simgaroop.dreamwidth.org/39709.html SimPE
Tags: #Multi PT, #Pollination Technician, #Alien, #BigSimsfan12, #Aliens, #Sci-Fi

Back to download view
8 Comments / Replies (Who?) - 2 Feedback Posts, 5 Thanks Posts
Hide Thanks Posts for this thread (Show only feedback)
Mia Moonstar

Thank you! This is the first multi-PT mod I've stumbled upon that I've immediately wanted in my game. It provides variation, but is still Maxis Match.

Quick question: If I install this, then want to use a default face template that isn't multi-PT (like this one for example), would I need to delete your template or would it simply override one of the PTs?
Quote:
Bigsimsfan12

Quote:
Sorry I actually don't know because I can't really work out what that mod actually does. Does it replace the original PT or does it just change the 'alien' face template? because if it just changes the template it shouldn't matter (none of my PTs use the alien face template anyway), but if it changes the PT then it can't be used with my mod. - Sorry I can't be of more help, you might want to try asking on the help forum?

You did such a great job!!!! I loved hearing about the process as you were working on it, and one of these days I will get around to making one of my own- seeing this as an official download is definitely an inspiration to get working!

It's a pretty quick mod to make, I had it done in an afternoon. The process of making sure it was 100% safe took a little longer, but that's because I wanted to be thorough, I'd hate to destroy someones game.
~Your friendly neighborhood ginge
attuned
Top Secret Researcher
THANKS POST

Congrats on your first upload! Such a great idea...
Terena
Test Subject
THANKS POST
#7

I love these! Thank y0u!
Fyren5
Inventor
THANKS POST
#8

I love the alien that uses Rainelle's face template!! She's so pretty in a unique way. Thanks for this set!
emblareiff
Test Subject
THANKS POST
#9

thank you for an amazing mod that saved my issue of always having all the aliens in my hood being related lol. 1000 times thank you