by zennyrpg Posted 29th Dec 2015 at 4:54 PM - Updated 30th Dec 2015 at 6:25 AM by zennyrpg : Grammer fix
11 Comments / replies (Who?) - 3 Feedback Posts, 8 Thanks Posts
This is a Maxis Recolour which means that it is a recolour of an item that already exists in your game. Please check the Expansion pack requirements to see which game pack it recolours.

I made this mod to solve a vexing problem: my favorite cats looked good first generation, but when bred, their kittens' markings were often unrealistic and tacky.

One problem is how the game will use multiple layers to build more complex markings. Often, the game will use base coat colored markings to shape white markings. For example, breeding a tuxedo cat to a pure cream cat may result in a cat like the one below. Since the tuxedo cat has "hidden" black markings, some of these inevitably are passed down to the offspring. 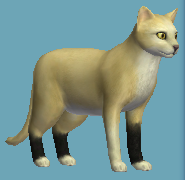 There is also the related problem of groups of patterns: some layers just look better when combined with other layers. But since breeding selects a random set of layer to pass on, the results can be sub-par. A siamese cat with only a few of its markings just doesn't look right. A cat with only 2/4 white boots is sometimes okay, sometimes not, depending on which boots it has. That made me wish some markings, like siamese or boots were "all or nothing."

This mod solves these problems by replacing serveral of the most offending patterns/ combinations with combined/ inverted versions. For example, you can now get a Siamese patterned cat with a single layer.

Be warned, these replace some default patterns, so your existing pets may look different after you apply these- a quick trip to the mirror and you can reassign their patterns as desired.

cat_all_boots.package: Replaces the left-front boot pattern with a pattern that contains all boots.

cat_all_paws.package: Replaces the left-rear boot pattern with a pattern that contains all four paws.

cat_unicorn.package: Replaces the "head helmet" pattern with a pattern that covers the chin and between the eyes.

cat_siamese.package: Replaces the "back crisp" pattern with a pattern that covers the entire body except the points: ears, face, boots, and tail.

cat_underside_crisp.package: Replaces the panda pattern with the inversion of the "back crisp" pattern.
Tags: #cats, #pets, #markings, #patterns, #layers

Back to download view
11 Comments / Replies (Who?) - 2 Feedback Posts, 8 Thanks Posts
Hide Thanks Posts for this thread (Show only feedback)
CatOfEvilGenius
Not actually evil.
THANKS POST

Thank you for no more strange looking creatures!
Sophie-David
Theorist
THANKS POST

This is a great idea - thank you!

How will these affect cats and kittens that already exist?
joandsarah77
Needs Coffee
retired moderator THANKS POST

Wow, thank you very much. I never understood how the passing on of cat genetics worked this will help a lot.
Bubblebeam
Scholar
THANKS POST

Could you post before and after pics of the replacements? It's hard to visualise some of them. Thank you for a great mod though.

Amazing. Thanks for sharing this! ~two thumbs up and a T-button click from me~
zennyrpg
Test Subject

This doesn't affect kittens, since as far as i know, they have no markings.

They will, however, *replace existing patterns on cats*, so if you have some cats that are using them those cats will look funny until you get them to a mirror. It really all depends on the breed/ what patterns your cats are already using. All replacements are in their own package, so you can pick and choose which ones you want to use.

cat_all_boots.package: Replaces the left-front boot pattern with a pattern that contains all boots.
*After replacement this pattern usually looks okay, since if they had a left-front boot they will now have all boots of that color*

cat_all_paws.package: Replaces the left-rear boot pattern with a pattern that contains all four paws.
*After replacement this pattern usually looks okay, since if they had a left-rear boot they will now have all paws of that color*

cat_unicorn.package: Replaces the "head helmet" pattern with a pattern that covers the chin and between the eyes.
*After replacement this pattern usually looks bad, since it takes the head helmet color and puts that on their nose. Switch the color to white to make the cat look good again.*

cat_siamese.package: Replaces the "back crisp" pattern with a pattern that covers the entire body except the points: ears, face, boots, and tail.
*After replacement this pattern usually looks bad, since it will cover most of their body with (mostly likely) a dark color. If you want a siamese cat, switch the color to white. If you want the cat to look like it did use the cat_underside_crisp.package pattern.*

cat_underside_crisp.package: Replaces the panda pattern with the inversion of the "back crisp" pattern.
*I don't think any of the default breeds use the panda pattern, so you probably won't have to fix up any cats. Unless you actually use that pattern... In which case you may not want to replace it.*

This mod is purely a texture replacement. So if you remove the mod, the textures will go back to what they were before.
grammapat

So if I'm creating a cat with points I would start with white (or another light color) in the Siamese pattern, then add "all boots" in another color. I like lilac points, so I would have to layer 2 light colors. When you do that does the game pick up this blended, lightened color? I then would do the same thing for the muzzle or just the nose, and the outer ears, then add a custom dark "eyeliner". Guess I will have to experiment
Namaste... or "go"
natboopsie
Forum Resident
THANKS POST

Works a lot more sensibly than the vanilla logic---thank you!