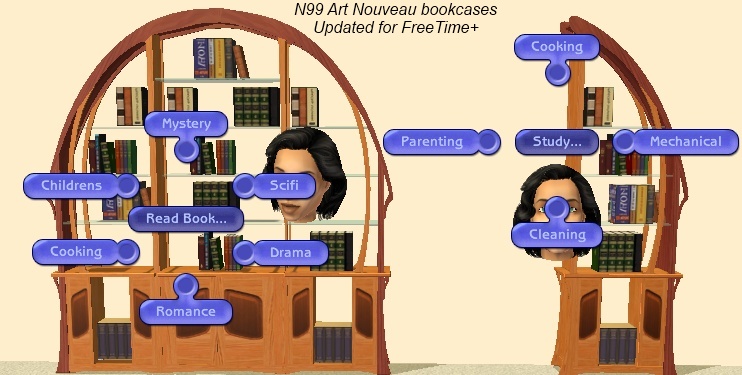 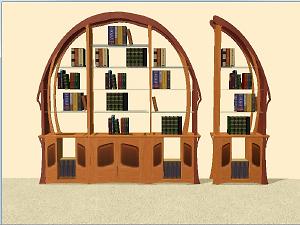 140 Thanks  Thanks     18 Favourited
This is a new mesh, and means that it's a brand new self contained object that usually does not require a specific Expansion pack (although this is possible depending on the type). It may have Recolours hosted on MTS - check below the description for more information.
These are updated versions of the large Art Nouveau bookcase and Mirror Match Art Nouveau bookcase that Komasutra made for the Neighborhood 99 forums. (The Mirror Match bookcase is also included in the Art Nouveau tables set.)

celebkiriedhel made versions that are slaved to the base game's Novellas Nouveau bookcase, which are available at GoS. She also set the large, three-tile version of the bookcase so that it has subtiles, and made repositoried versions of some of Komasutra's other Art Nouveau items.

With her permission, I've updated both bookcases to use FreeTime/Apartment Life functions. Both packages are in the same rar file, and their filenames are tagged with "_FT". They will not work properly in games that do not have FreeTime or later, as they use a global interaction table that was introduced in FreeTime.

If you don't have FreeTime or later, I uploaded a fixed version of the large bookcase that is not updated for FreeTime; it is in a separate rar file. Its filename is the same as kiri's version, you can tell them apart by date. For a non-FT version of the Mirror Match bookcase, get kiri's at GoS. If your latest EP is earlier than Pets, you can't use the large bookcase, but can get IndigoRage's (University-only, not recolorable) or boblishman's (non-University, slaved) mirrored bookcases. (Komasutra's originals at N99 say they require Seasons, but they were made when Seasons was brand-new, and as far as I know, bookcases didn't change between Pets and Seasons.)

May 3, 2017: goderguy let me know there was a problem with the shadows for the Mirror Match bookcase, so I did some tweaking to the shadow texture. The front-view wallshadow should no longer be reversed, and should be more in line with the bookcase. Fixing the tall shadow that appears when the right side is next to a wall will probably require edits to the mesh, which I don't know how to do. I can't fix the shadows for the large bookcase, but updating tsNoShadow according to this tutorial by JWoods seems to have made some difference to the front-view shadow, so I've updated them as well. Both rar files have been replaced. The FreeTime+ rar has updated versions of both bookcases. The Pets-BV rar now has a shadow-fix for kiri's non-FT version of the Mirror Match bookcase, as well as an updated version of the large bookcase.

When testing the three-tile bookcase in-game, I found that Sims had routing failures whenever I told them to use the bookcase, and that it could intersect walls. I was able to nick an init BHAV from a 3t2 conversion of a TS3 Generations bookcase that Amovitam did here, and Michelle used here. (I'm pretty sure it's Maxis code that was cloned from the bookcase Amovitam used as a base.) That let Sims use the bookcase, and kept it from intersecting walls, but it also let the left and center tiles intersect objects, and let Sims walk through them. Apparently, when a cloned object is larger than its base, this can happen with the added tiles. Fortunately, Echo's tutorial mentioned that there's a footprint block in the CRES. Knowing that let me find what's left of this tutorial by Murano, which described SimPE's footprint-editing tool well enough that I could make sense of what I saw in it. That let me be not-uncomfortable with trying to edit the footprint, and that did the trick.

tl;dr : Sims can now use the large bookcase, they will route around it if they need to, and it cannot intersect walls or objects.

Additional Credits:
Maxis, for the original Nouvellas Nouveau bookcase mesh.
Komasutra, for the three tile and reversed versions.
celebkiriedhel, for making repositoried versions and giving the large bookcase subtiles.
Amovitam, for using the AL two-tile bookcase as a base, and Michelle, for posting recolors here. Not having AL, I wouldn't have had access to a non-expanded multi-tile bookcase without having Amovitam's, and I wouldn't have known about that object without Michelle's recolors.
Echo, for the tutorial which explained the "walking through expanded objects" issue, and pointed me to the CRES footprint block.
Murano, for describing how to edit the footprint block, well enough that I didn't need pictures to understand it.