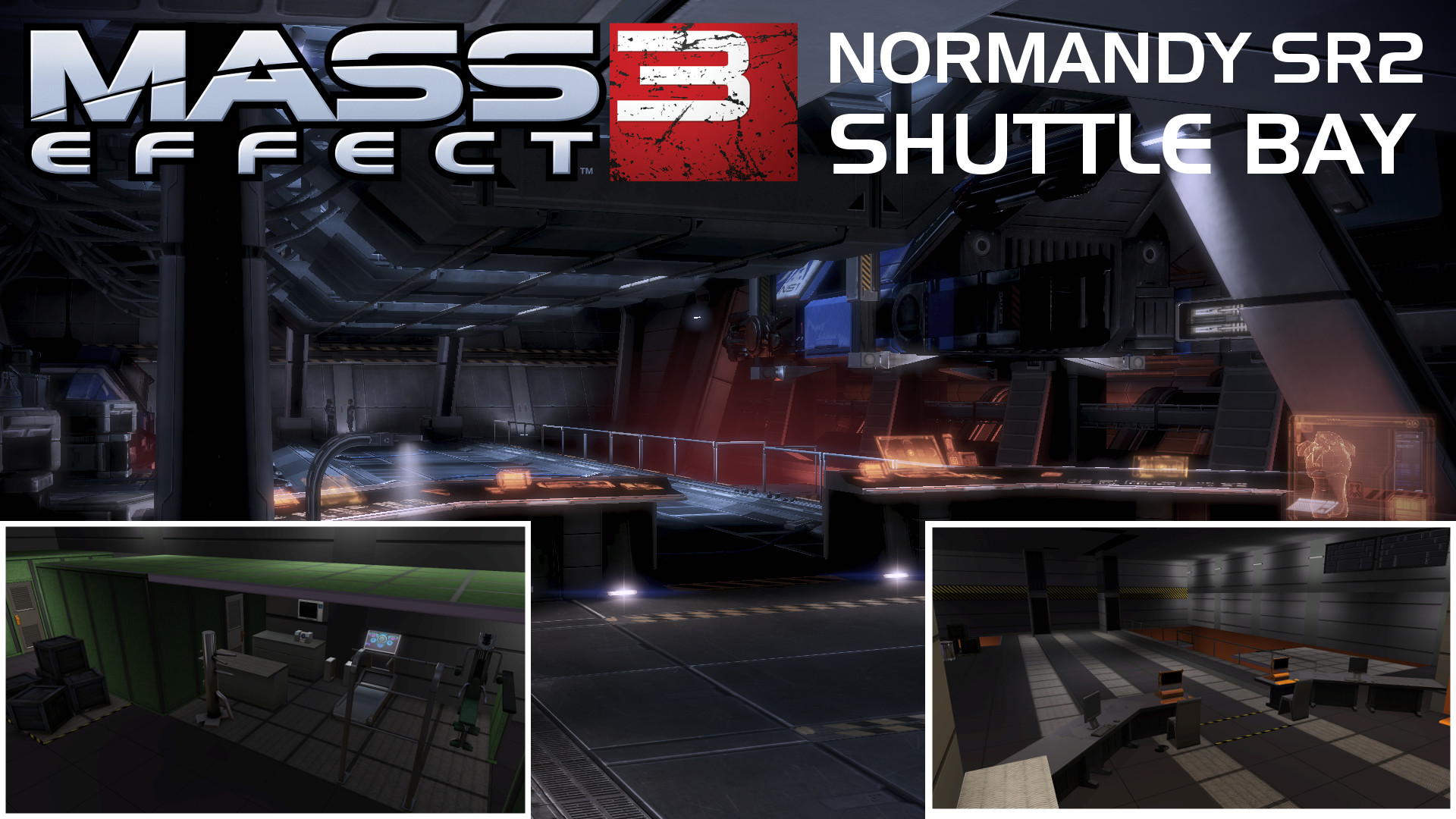 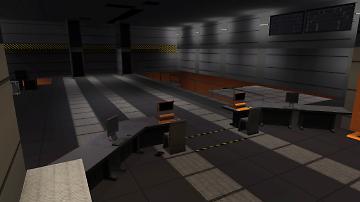 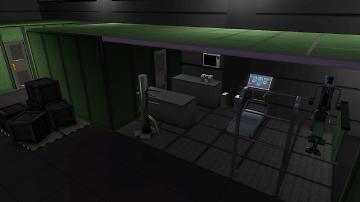 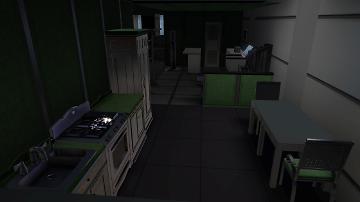 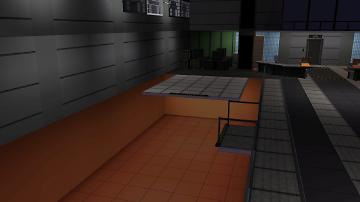 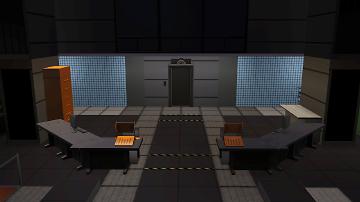 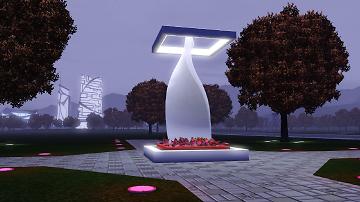 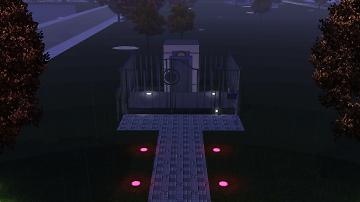 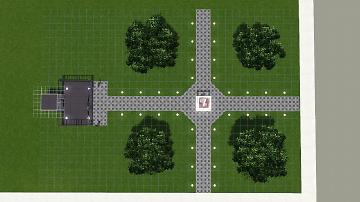 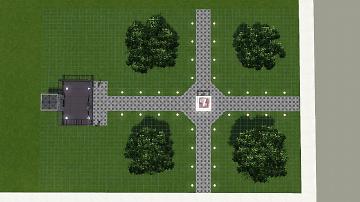 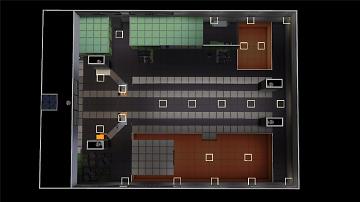 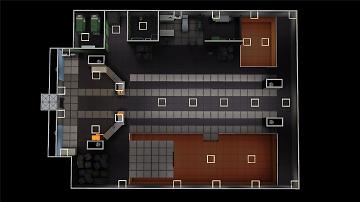 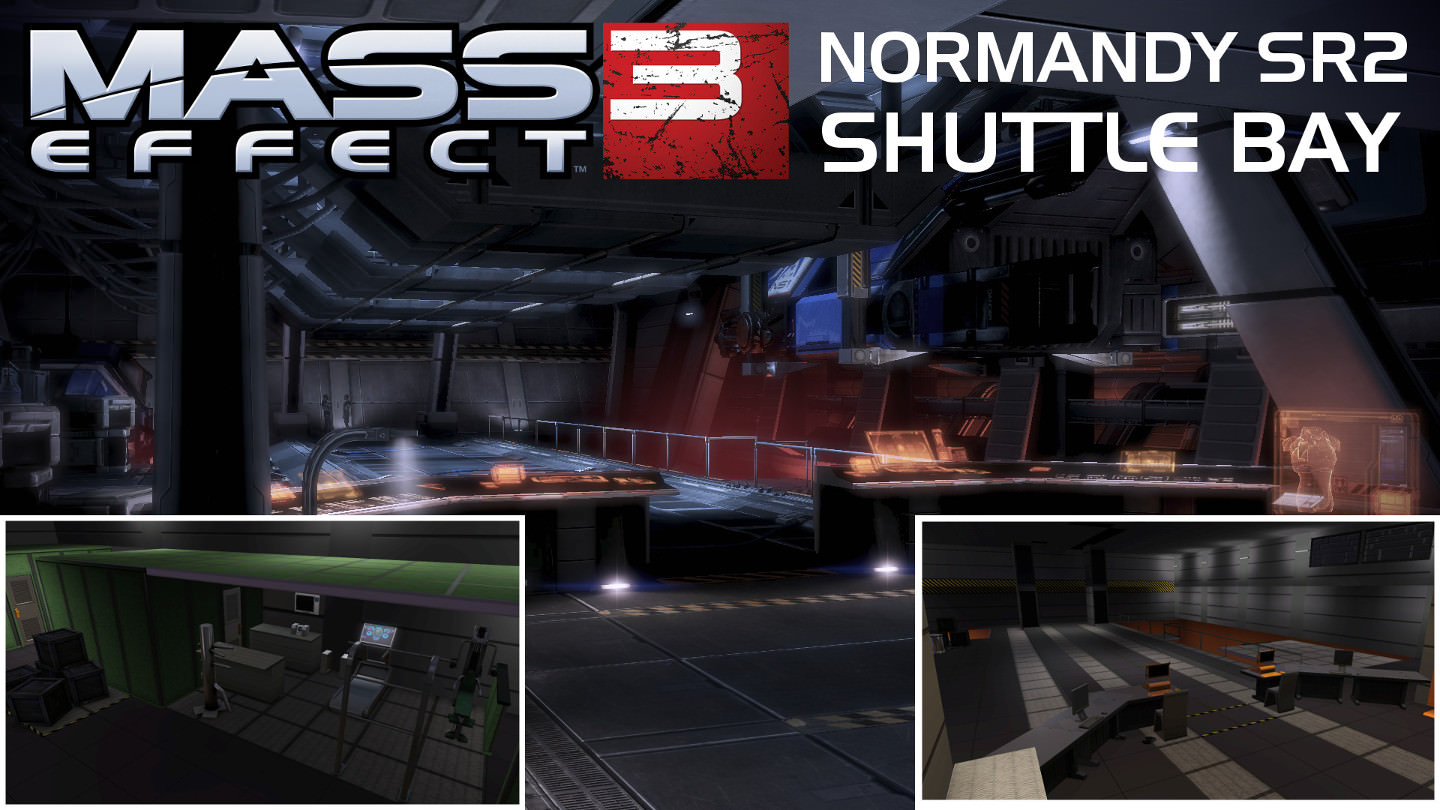 Hello and welcome to my recreation of the Normandy SR2 Shuttle Bay, Mass Effect 3 edition! This residential lot is a continuation of my Normandy SR2 recreation and serves to add the fifth and final floor of the ship, which was missing due to the limitation of basement levels within the Sims 3. It is a great place to hone your Sims’ fitness skills! Now, without further adieu, let’s get into the details of this lot.

Much like my Normandy SR2 lot, the Shuttle Bay is submerged beneath the ground as a basement, to more accurately simulate the feeling of being in space. Sims can access the Shuttle Bay via an elevator on the surface or a “LLAMA”, one of which is located within the Combat Information Centre (CIC) of the Normandy SR2 (for those who have downloaded it).

I matched the interior of the Shuttle Bay directly between Mass Effect 3 and the Sims 3 by alt tabbing between the two titles during the building process, allowing me to produce a higher quality recreation. Though the size of this lot is not a hundred percent loyal to its inspiration, all of the areas where your Sims will be hanging out are about as close as I could make them.

Importance of stuff packs and expansions packs:
Late Night: NECESSARY/HIGHLY RECOMMENDED — unless you own the Supernatural expansion (for access to the “LLAMA”), I do NOT recommend downloading this lot without Late Night, as your Sims will not be able to enter it without the surface elevator. The pack also includes the celebrity gate and fencing for keeping out unwanted guests (namely paparazzi).
Supernatural: NECESSARY/recommended — if you do not have Late Night installed, then this pack is a necessity, as you will need to use a “LLAMA” to enter the lot. If you have downloaded the Normandy SR2 lot and also have Late Night installed, then this pack is only recommended, due to a “LLAMA” within the CIC of the ship allowing swift and satisfying travel between the two lots (at least until you get cursed

).
Into the Future: HIGHLY RECOMMENDED — includes a fair few pieces of furniture into the lot, including a treadmill, four bunkbeds, a toilet, a wardrobe and various counters. The ground level is decorated with trees and a fountain from this pack. Though the lot won’t break without this pack, it might turn out a lot uglier.
Pets: Recommended — includes most of the kitchen accessories including the fridge, dishwasher, trash compactor and dining chairs. Also home to the shower and bath in the bathroom.
High End Loft: Low importance — adds two computers and a television into the lot that fit the aesthetics. The computers are easy to replace though the television may prove more difficult.
University Life: Low importance — also adds two computers, as well as a stereo into the lot that are all easily replaceable.
Showtime: Low importance — adds a chin-ups bar so you can get thicc like James Vega.
World Adventures: Optional — adds a martial arts board breaker platform and training dummy which can be both be ignored.
Fast Lane: Optional — adds a dining table into the kitchen that can be easily replaced with any table of your choosing.
Generations: Optional — adds a single decorative object of very low importance.
Custom Content: None! Almost every part of the lot was textured and coloured using Create a Style. No outside content is at all required to run this lot!

And that’s it! The Shuttle Bay is far more accessible in terms of pack requirements when compared with its parent lot, the Normandy SR2. Just in case you’re sceptical though, feel free to check out the attached screenshots. Though this lot will most likely appeal to less people than its parent, there may still be those who have sought this addition, and I’m happy to supply it to them!

A few miscellaneous details I’d like to mention concerning this lot are the walls, the large gaps in the floors and the “Unfinished Room” moodlet issue. This lot is a total of two stories beneath the ground, but it’s made to appear as a single floor, with no ceiling separating the two levels. Unfortunately, Sims 3 wasn’t programmed to recognise this and therefore perceives the rooms as unfinished, due to the missing ceiling/floor. There’s no solution to this that I’m aware of, so you might just have to live with it.

As for the above mentioned floor gaps, these are where the shuttles generally hang in Mass Effect 3. I placed two parking markers at the edges of one of these gaps that work exceptionally well when a vehicle from Into the Future is parked over them.

Just a final warning: when you first move into this lot, all of its lights may be turned off. Make sure to turn them on, though be cautious when changing the colour of all lights on the lot, as the lights within the floor gaps are using a custom orange which will be erased if you try tampering with them.

I won’t take up any more of your time. Comment, tell me what you think and leave a thanks if you like it. Thank you!