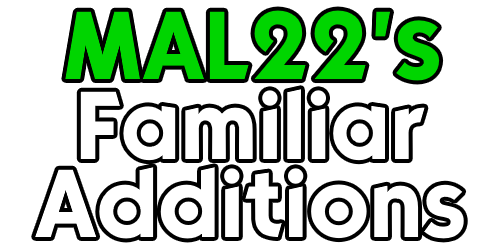 Do not bundle the Familiar Additions script with your custom familiars.
Provide a link instead as it will make it easier for users to have the most recent version.

Familiar Additions provides a framework that allows the addition of fully functional, and standalone, familiars to The Sims 4: Realm of Magic without relying on conflict prone tuning overrides. Instead, it injects modded familiars into the game with the help of a tuning, provided by the modder, that contains the data of the familiar they wish to add.

As of version 1.0, Familiar Additions can do the following:
Furthermore, a very simple, but fully functional, modded familiar can be downloaded as an optional file. It may also be used as a template to ease the understanding of how modded familiars are implemented.

Feedback and suggestions regarding future versions of Familiar Additions are welcome.

Realm of Magic is required for this mod to function.

Extract MAL22_FamiliarAdditions.ts4script file from the main archive. Then, drag and drop the file(s) in the mods folder of The Sims 4.

The Red Fairy files can be merged but were provided separately to ease the learning curve that may come with creating modded familiars.

Need more information?
Back to download view
7 Comments / Replies (Who?)