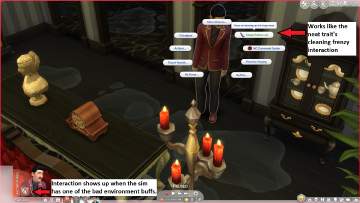 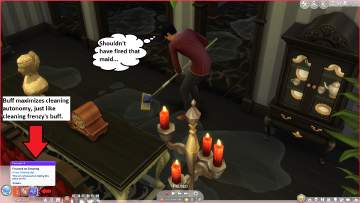 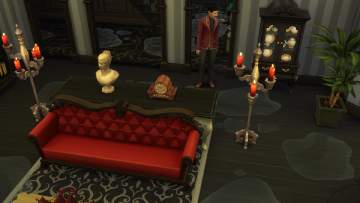 This mod contains a script component. The .ts4script file MUST be placed directly in your mods folder or at most 1 folder deep for the mod to work.

UPDATE 2020-6-13: English language players do not need to update. The interaction will no longer display blank text while playing in non-English languages.

This mod adds a self-interaction for non-neat sims that is visible whenever they have one of the "bad surroundings" buffs. The sim will gain a +3 focused buff for 3 hours which maximizes their cleaning autonomy, the same as how the Neat trait's "Cleaning Frenzy" buff works.

The interaction will only show up on lots with an owner (residential and apartment lots). The interaction is not limited to the lot owner, so you could, for example, invite a neat sim over to your slob's messy house and have them clean up your mess.

There are multiple versions of the mod. Please install only one.

Autonomous: The interaction can be performed autonomously. Also enables autonomy for the existing "Cleaning Frenzy" interaction.

Always (Non-autonomous): This interaction and cleaning frenzy are always available for non-slob sims, but they will not be performed autonomously.

Always (Autonomous When Dirty): This interaction and cleaning frenzy are always available for non-slob sims. They will only be performed autonomously when the sim has one of the "bad" environment buffs.

Does not require any packs.

The non-autonomous version overrides no resources.