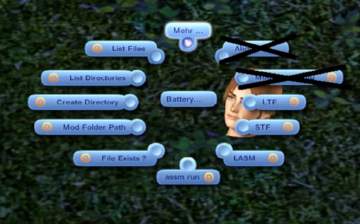 35 Thanks  Thanks     15 Favourited
Overview:
The Sims 3 Script Extender (S3SE) adds IO functionality previously unaccessible to Modders. You can access the new Functionality by interfacing with the C# Script Utility mod Prototype Version.
It is currently in an advanced prototyping phase, right now the mod only adds IO capabilities to the game.
If you got suggestions what additional features would be cool, let me know and i see if implementing them makes sense for the mod.

You will need my Script Utility mod (Version 1.02b8 and up) to Interface with this mod.

Origin Users:
Start your Game, when the Game starts loading (before the main menu should have to notches on the green loading bar) run S3SE_runtime.exe, if the process was sucessful you should see a Message soon after

Users who can start the game via TS3W.exe:
Run the S3SE.exe and wait. The game should automatically start up after a moment and should show a Message soon after the loading begins (if that does not work you can also try the Instructions for Origin Users but make sure S3SE is not running anymore [Task manager])


You can now find the nraas_exporter_002 mod in the downloads section.
This mod is an example usecase for S3SE, with it you can load or save the settings of your NRaas mods from/to disk and can carry them over to other Computers or exchange your Settings with other Players.

Check out Lyralei's great tutorial that showcases the S3SEexample.package with some cool Examples to try. But be warned, only follow that Link if you dont suffer from anatidaephobia ! (she really could have been a bit more considerate and use something like spiders instead)
Tutorial - Using Battery's S3SE tool as a script modder


Disclaimer:
I dont take any responsibility for any damage caused by this mod (direct or indirect), so as always use at your own risk !

Terms of Use:
Do not reupload / claim as your own.
Do not create derivatives based on this

Conflicts:
Right now im not aware of any conflict with another mod, let me know if you run into such a problem.


- The game can crash at the Startup (the Start procedure is somewhat delicate and time sensitive) Trying again often results in success.
- Some antivirus software detects the files as malware
- Writing files to protected drives does not work (I guess thats not an issue ? )


Additional Credits:
Special thanks to my fellow Script modders who risked their lives to test S3SE (Testing was maybe not quite that dramatic)
zoe22
Axen
Lyralei (also for her Awesome Tutorial)
MissPat who helped a lot with the Documentation

If you need more info, see:
Back to download view
13 Comments / Replies (Who?)