Laurell K. Hamilton has an interesting point of view of a world with lots of supernaturals in them. And it's mature rated. Well, immature, but quite graphic. More like an X rated SN, with animations.
lisfyre

Oh ya forgot to ad - The Underworld series of vamps I like a lot too. And of course the one and only Vlad the Impaler

Life is short, insecurity is a waste of time. ~Diane Von Furstenburg
You don't get out of life alive. ~Jimmy the Hand
♥ Receptacle Refugee ♥
dreamfoil

A thread about Twilight wasn't horrifying enough for you? You had to mention another bad author *cries*
StardustX

Nope. I never even wanted to, but I did cringe a few times when Twilight-related uploads appeared.
-edit- I didn't cringe because the uploads were bad, just because I hate the idea of playing them in Sims xD

I read the books. They were stupid. But that doesn't mean I didn't enjoy them. I enjoy any book that actually catches my attention.
I watched the first movie out of curiosity and it completely ruined the whole series for me so that's my reason for not making the Cullens.

I read all the Twilight books because I wanted to make sure I knew what I was criticizing. But I was greatly surprised. The books weren't bad.

IN fact they were quite atrocious and horrible.

Worse yet, young students keep recommending these ill written books when taking College level Literature classes for classroom reading. I REFUSE TO PAY THAT MUCH MONEY AS AN ADULT CONTINUING EDUCATION TO READ THOSE BOOKS, and then try to form some sort of academic discussion about them.
No joke, I use the pages to start my charcoal grill in the summer and the ONE twilight dvd I bought and watched drunk is now balancing out a wobbly dresser leg in my closet.

I bought Supernatural because I download CC that requires it. But good luck to those who use Sims to recreate their Twilight fantasies. My fantasies are a bit darker and bloodier concerning vampires.

Well to be fair there are authors of the same genre even worse than LKH.

Not a fan and felt no need to recreate them. But since EA was so kind to provide them in Moonlight Falls, I thought I might aswell play with them. Tristan ate Bailey. Bailey died. Chester killed Tristan. The end.

Poor Chester the only sane and decent character in the series.
eskie227

OK, this is a scary thread, but the thought of Twilight in a literature class is downright terrifying.
TigerAnne

I love writing crack fanfictions of Twilight, does that count as "fan". Also, I sort of made Xander Clavell into an Edward-expy when he became a vampire with three celebrity stars. He's human again now.
Fentonparkninja

The guys who worked on Showtime were wise to limit the scope of Simport, otherwise I would be Simporting meteors into people's games to take out their Twilight-themed sims.

Possibly their One Direction ones as well.
skyrider77
Lab Assistant

Thats a good point actually and interesting you should say that. Someone earlier on in the thread mentioned Interview with the Vampire. Now.....although IWTV doesnt abserdly go outside the box like Twilight does (with vampires that sparkle in the sun ect) i wouldent watch it again, ive seen it once before, i wouldent watch it again....why?, because in my opinion it was too slow and uninteresting, didnt grab my attention enought.

Now on the other hand, i have seen all the Twilight movies, and i have watched Twilight and Eclipes more that once. Breaking Dawn part 2 im sure ill watch again sometime aswell. BD part 1 i wouldent, boring as anything!!!. New Moon....i would fast forward all the bits with bella or the cullens in......boring boring they were. Im not put off by a vampire movie if the vampires in them are not human homicidal creatures, i rather like some movies that have humanitarian vampires in them, like Daybreakers.

I did consider downloading other peoples creations of twilight characters and putting them into the game, but the fact id have to download much CC with it....i decided i couldent be bothered in the end. And if theres mimicking characters in the game already of them, ill happily stick with them.
ButchSims

The books are much better - I totally agree Butch and Lestat is wonderful in print. He doesn't make a good sim though, I've tried

But in more skilled hands I suspect Lestat could be awesome in Simdom. In fact I made the whole household (as per the movie) once, Lestat, Louis and Claudia - fun but it didn't *quite* get there for me - I might try again now we have more traits - especially 'brooding' for Louis ... *ponders* ...
bnefriends
Forum Resident
#38

I've watched all five of the movies. They're not bad for a teenie bopper thing in my opinion, but what could you expect from something that had one of the same screenwriters as the first four seasons of Dexter? The series gets bonus points for being pro-life,

You may find this useful.
Margaret Pendragon

Quote:
Interesting way of putting it. I've read the Twilight books, and actually enjoyed the first 2, but it started getting a bit much by the end of the series. I liked them nonetheless, although the thought of them in a literature class is a bit...absurd.

Speaking of stupid vampire books, I'm surprised no one's mentioned the Southern Vampire Mysteries. In that case, the author just takes all the cheesy myths and legends about vampires and rolls with them, instead of trying to be serious or pretentious about it. The result? Campy, but in a good way. Fun reads.
2.18: His Empty Reality
2.17: It All Adds Up
2.16: Better Than Sex

HEY. I used to love Twilight!

To be fair, even my English teacher back then had praised, loved and read all four books in the entire, shitty series. I hate it with a passion now, though.
My male Sims are...Simulicious!
mithrak_nl
Scholar
#42

Quote:
I can understand that. I have this with sci-fi. I am a sucker for sci-fi and have a high tolerance for badly written books or scripts when it is for tv series. Sometimes plotholes make me twitch a little, but the moment I see a cool lasergun I go 'Ooohhh pew pew' and forget all about the bad script/story.
With other genres I hate bad writing or acting to the point that I stop reading or watching.
GabyBee 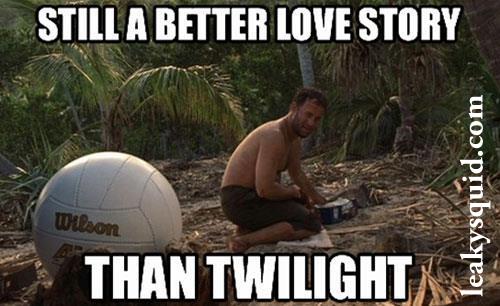 The City of Eastport
ZenGarden

Since vampires are sensitive to sunlight, why is Edward and his family living in a house with windows EVERYWHERE?
God I hate Twilight
seraphime

Not so much a Twillight fan but I did modify the existing spoof on them that came with Supernatural. I dont play them but with Twallan's mods that I use I get updates about their familys. I did recreate the cast of Being Human (US version) and a few other sci-fi/fantasy shows.
Never take life too seriously, nobody gets out alive anyway.
"I'd trade all of my tomorrows for just one yesterday." Me and Bobby Mcgee
heat33330
Field Researcher
#46

Being Human US is worse!

Ads for that stupid show is on nearly everyday before Doctor Who on Watch, such a load of crap - That ghost is the worst "What does it look I'm doing. I'm freaking out.", PLEASE someone hit me with a brick.

Which game is made for the juvenile minded?
Ra-BeeraIslandreTaria123
Test Subject
#48

I know this thread is really old now but w o w guys way to act real mature. You don't like Twilight? That's fine! Just ignore the few posts about it within the community. OP wasn't trying to shove it down your throat or anything, just trying to reach out to other fans. I'm not saying the series is perfect, but people do genuinely like it, and there's nothing inherently wrong about that. I really don't understand why you all felt the need to draw such a deep line in the sand, this thread doesn't hurt anyone.

Skyrider77: I like playing with characters inspired by the Cullens, starting from the very beginning with a child Carlisle and exploring their potential adventures throughout their long lifespans

Necroing a thread, to make somewhat unrelated comment. All of these people were nothing near insulting (ok, maybe somewhat). but they jst had fun. And it was nothing over the top. They only comented and gave their opinions on the series. A lot of them even helped the OP to easier find the twilight fans and part of the community on this site.
Ra-BeeraIslandreTaria123
Test Subject
#50

Sorry, it just seemed as though the negativity was unnecessary, it's an attitude that crops up a lot surrounding this sort of topic. I really just wanted to show some support, however long ago this occurred. Idk, I was just trying to be a nice person