Like many of you I have quite a few expansion and stuff packs for the game, Sadly, most worlds that come with the game only have stuff from the base game and the specific expansion pack the world came in. I would like to expand the horizons for my sims and let them experience things from other packs.

Yes, I could download lots, but lately I've found that good lots worth downloading are few and far between. Not to mention I don't like bogging down my computer with unintentional CC downloads. I guess if you want something done right, you have to do it yourself! Now, I did quite a bit of building of lots back in the Sims 1 days, but I have gotten rusty over the years. There are also so many new Tools to use and unique lot sizes to build on. So I come here asking, Do you have any particular tips and tricks to make nice-looking lots? I'm mostly interested in making community lots, but I'm sure tips for residential lots could work as well.
Advertisement
fascisthater
Site Helper

100 people will give you 100 different answers. You really need to just get started and find your own style. Try things until you get what you like. That is what all of us do.
Pary

If I find myself lost for ideas when building, I look at house plans online. I particularly love craftsman, so I look at those, and I edit the plans to suit my own tastes, and within the limits of the game. This is a picture of a little one I built, from a plan. The front porch is true to the plan, but I altered the rest of it to suit my own tastes. 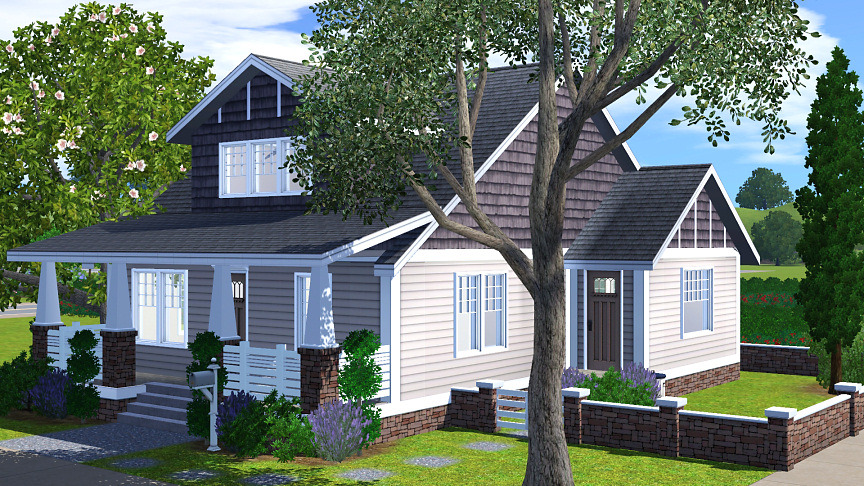 I don't use a lot of clutter when I build, nor do I use lots of building cheats. I particularly avoid lots built with CFE due to encountering so many issues with lots using that cheat in the past, that I just avoid it like the plague now, unless it is a build from someone that I have downloaded from before, who's house hasn't given me any issues.
I keep landscaping to a minimum ( sometimes, because I love lots of plants

) if I am making the lots for other people to download, and I try not to use much custom content. That house uses a CC door and the weatherboard pattern on the walls, as well as a matching window on the top floor and that's all. I also nearly always build on flat lots if I'm going to share them, and leave plenty of room for others to shape the land as they like.

I agree with daisylee, and just think that if you want to start building your own stuff, then just get in there and build. I have scrapped tons of houses that I began building, and thought were "meh" or didn't work the way I wanted. Just practising over and over will help you find your style and taste, and what you like.

One thing I'll say though, is that in the beginning it is really easy to forget about spacing, and you fall into building hugely oversized box-like rooms. I did it, I've seen other people do it, and unless that's what you're actually going for, try to be aware of natural sized room dimensions.
Also, there is a roof height slider, don't forget about that. EA's default height is a roof that blots out the sun.
♥ Receptacle Refugee ♥
Volvenom

I'm curius as to why you can't find lots you like. Anything in particular you are dissatisfied with

I agree, why would OP ask builders for help if he/she doesn't care for any of our creations.

Maybe English is not your first language, but you really need to rethink how you word lines like these. There are a lot of builders here, I may not agree with all their styles and creations but I would not say things like they're not good enough to worth downloading. What a condescending attitude and then asking the same builders for help.
Sanity is overrated.

Here's some things I keep in mind when building. I recommend getting inspiration from real houses, but they do need adjusting to fit in with the aesthetic and routing of the game (all image examples below are my builds, inspired by real houses, with added details).

Keep routing in mind. Make rooms big enough for two sims to interact in them without having to go outside. Generally, a 3x3 empty space is enough, but some activities you can consider for routing concerns are sims sparring, picking up toddlers, pillow fighting, having a spellcasting duel etc. which require more than 2x1 of free space.
Stairs should have at least a 2x2 space at the top and bottom for proper routing, and I always make hallways at least 2 tiles wide for the same reason.
A bedroom with a doubled bed (with a 2x3 footprint) should be at least 4x6 tiles big, in my opinion, especially if you add things like dressers or plants.
Porches work best if there are at least 3 tiles from the door to the edge of the porch. This prevents sims from ringing the doorbell and having to go down the stairs to be invited in. example

Use accent colors/areas. Instead of using the same texture on the entire house, try using different materials and colors. example

Build in a way that makes sense. A pet peeve of mine is building roofs in a way that would make them practical IRL.
For example, real sloped roofs are built in ways that would make snow fall to the ground, rather than remain on the roof. This is often an issue in TS3 builds with multiple roof types; it looks pretty but the game isn't "smart" enough to join them up properly. Of course, this doesn't apply if you're building for an area where it doesn't snow.
Speaking of which, your build should ideally reflect the climate or environment they're in. For example, I built an abandoned beach cottage on stilts to keep in mind flooding: example
If you build garages, make sure the cars have enough space to route (I know this isn't a thing in TS3, but for realism's sake): example

Add details for more realism. There is a set of drainage pipes under Misc Decor that I like to use. There's also stuff like ventilation shafts (from Late Night), a roof air conditioner unit (Supernatural), an electrical panel (basegame, I believe). What I did was go through buydebug and make a collection with all the more useful decorative items, so I can find them more quickly.
Deco mansards are also very underused in most player builds, and give a nice effect to the lot. If you have WA, they are common in builds in Champs Les Sims. example

Less is more when it comes to landscaping. Instead of putting a billion bushes of a billion colors, use at most 3 flower types and use bushes to give more visual depth. example

Edit: I know some of the builds listed as examples are ugly. I built them based on McMansions

1. Go to various house plans websites to look for blueprints. Pick ones that you like (and seem doable in TS3), then try to recreate them as best as possible. You don't have to be pin-point accurate; the idea is to to learn some techniques when you are ready to build your own house from scratch, as well as to gain inspiration.

2. Google or Bing buildings, outdoor spaces, open plazas, parks, etc. on image search, save whichever ones you like, and use them as inspiration for your own builds.

3. There are many nice lots (I feel) that came with the EA worlds and in the game library. If there's a build you particularly like in an EA world, study and try to emulate it.

4. Learn a little about types of architecture (as in colonial, Victorian, mid-century modern, Mediterranean, medieval, etc.). Get a feel for them so that later on down the line when you build more stuff, you're not thinking in generic terms, as in, "I am building a house/lot."

5. If you play open world games like GTA or Saints Row and like some buildings and houses there, recreate them in TS3.
The Sims Depot | Blog
nitromon

This one is definitely one of the major pluses. Sometimes that one electrical panel makes all the difference how real a building looks. I also like to add in more rustic and old textures in some areas especially the commercial lots just so not everything look brand new like it just came out of a mint conditioned box.

I don't have supernatural, but there are a couple of air conditioner units in my deco area, I think either latenight or even basegame.

If you do this, will it overcome the buydebug freeze bug?
Sanity is overrated.

Quote:
Hmm, I've never had a problem with buydebug freezing, so I can't comment on that. For me, putting buydebug items in collections (for example, the hidden effect and room markers) is a plus because it bypasses both having to load the huge misc buydebug category, AND you don't need to input cheats to see them.

And I checked and you're right: there's no air conditioning unit from Supernatural, it was from the basegame (don't know why I thought it was from SN).
Simblr | TS3 CAS Conversion Catalog - for basegame, EP, SP, and Store clothing!
CC reuploads: gelina | Hal's Archive | Kewai-Dou | mitarasi | Modish Kitten | pocci | Yesod Sims
310175
Scholar
#12

If you mean the one where you can't get out of Edit Town back to Live Mode if you used Buydebug.

Thanks, I'll give it a shot!
Sanity is overrated.

Quote:
Off-topic: how do you get graphics like in your picture? Lighting mod or something?
Just call me Nikel
Pary

I use Nilxis' Uranesian Weather lighting mod and run all my settings on high. Other than that, nothing else, it's just the time of the day and the angle of the picture that makes it look like that. I don't edit my pictures apart from resizing them, and giving them a mild sharpen, because resizing makes pictures kinda blurred.
♥ Receptacle Refugee ♥
Back to top