Tony
Came back to one of my older Sims and made quite a few facial changes. Managed to dig out a couple of old pics of him from July and August attached below.
Creator of Shields Road [TS2] - Carrer de Hebra [TS2]
Peace

Ive been playing around with sliders! lol 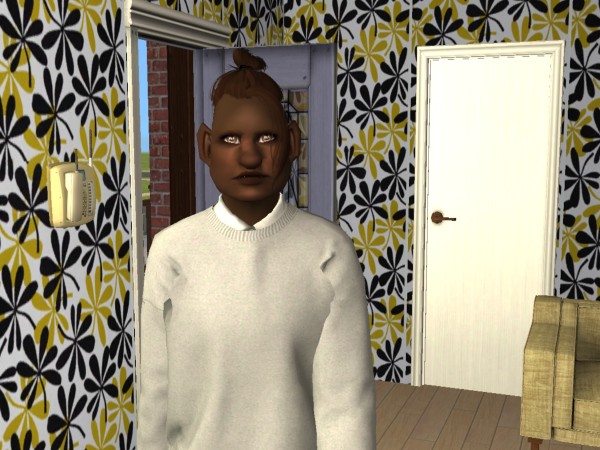 Have you ever walked into a room & forgot why you went in there?
What if God is playing The Sims & he just cancelled your action.
Adopt-a-Sim My Creations My Tumblr
WatermelonSandal

Picking an outfit for Jamie :)
Not sure, what do you think? I want him to wear something orange because I think the colour suits him. Orange is good. Definitely the jacket. Makes him look more confident with his choice.
My site - TS2 baby stuff - ToU

Just wanted to say I love your Sims, WatermelonSandal. Haven't downloaded any yet - I should have done that at the start and made them my townies - maybe I will do that on a few once this next rotations done. All of your Sims look great! I learned some good CC to use from you, too, so thanks!

Here's one of my Sims. Michi. He's a woodworker and primarily works as a stocker in the home business when he's not making wooden decorations and knife blocks. He found out just how much his wife does when it comes to running the family business. When she became pregnant, he was forced to try his best: 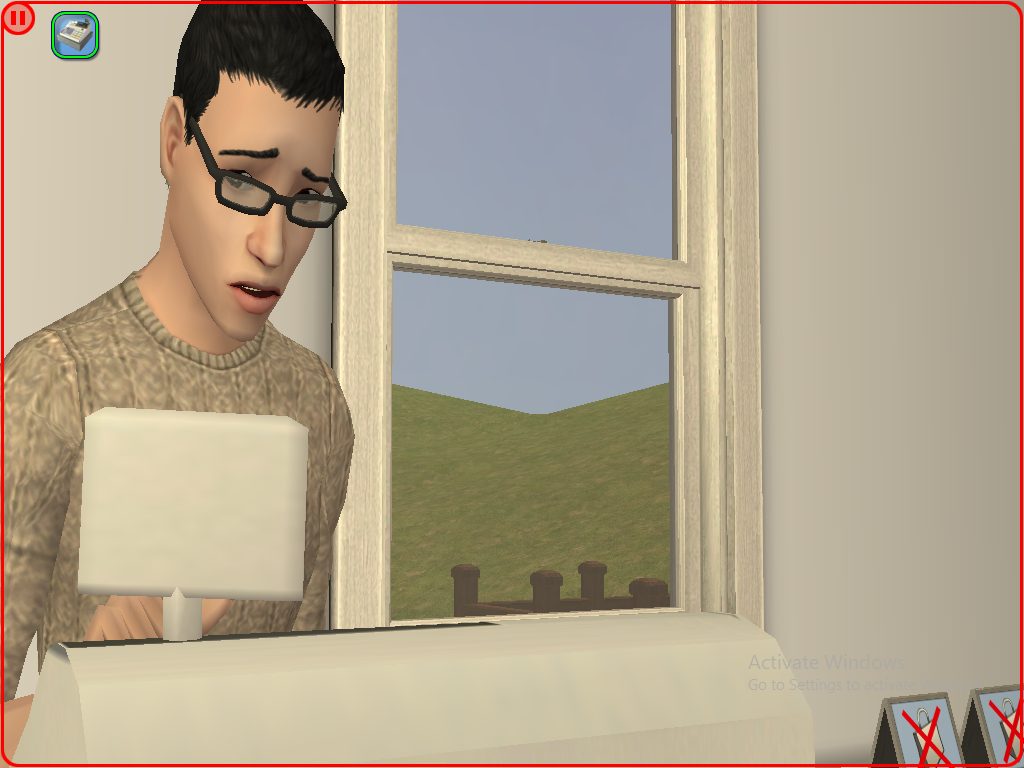 Don't let her and the home business down, Michi! 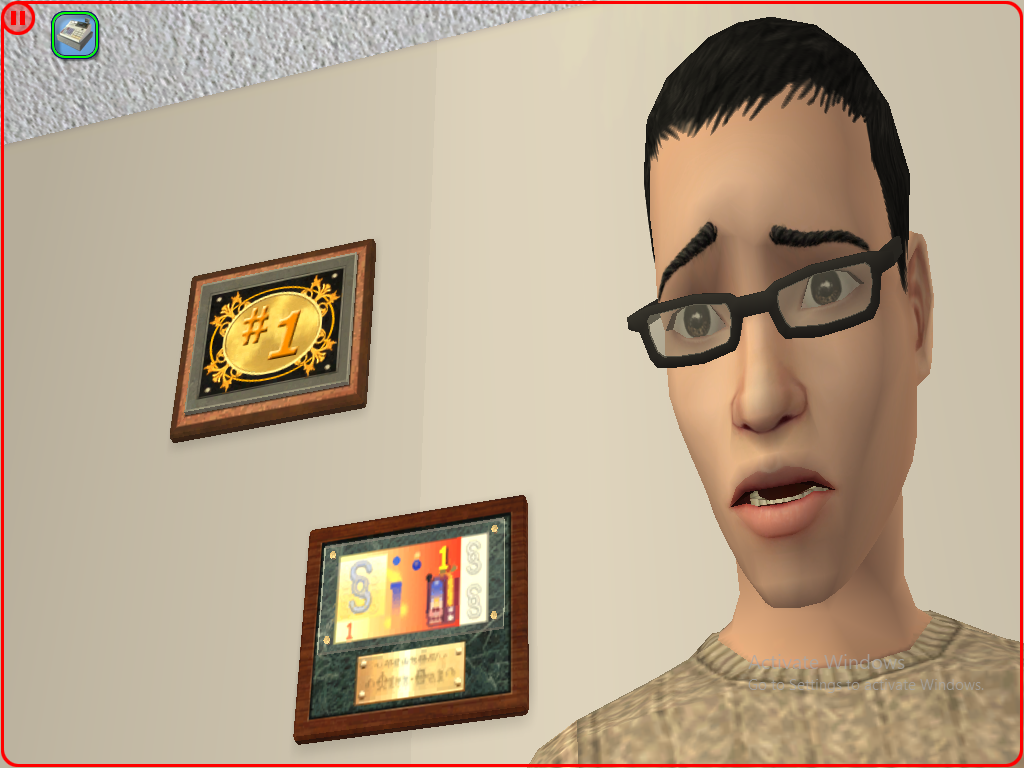 The line grew longer, but he persevered. For anyone who hasn't seen it, the animation for Sims who don't know how to operate a register is 110% ADORABLE. The little, singular beep once every ten sim minutes got to me as he found the buttons to push. 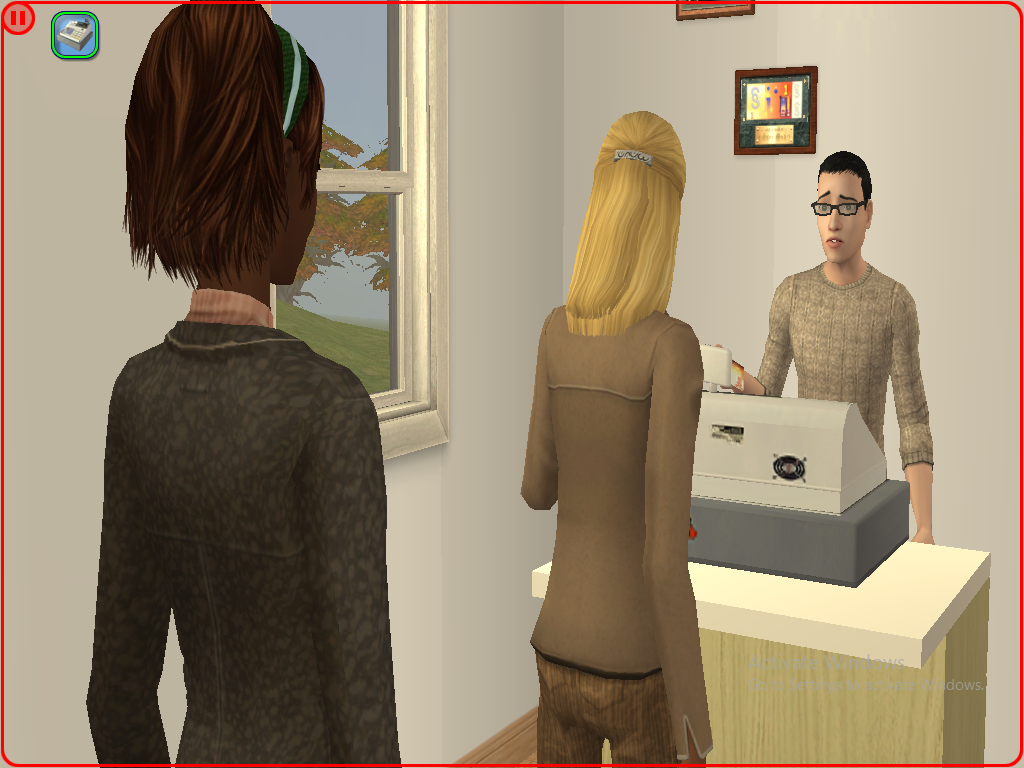 He finally succeeded when the till flew open and popped him in the stomach (not posted here).

I have deduced that he is probably the most... perplexed Sim in the neighborhood I've recently started, and he is not observant at all , especially when he's visiting his neighbor's home, which he has done EVERY DAY SO FAR in order to just use their chess table and not interact with them at all. And yet, the neighbors still like him, so I think he's just going to be my lovable goofball who is perplexed by social interactions. I guess I'll see, though.
simsample

I really love Michi, he has the same spectacles as someone else I know!

I will choose a path that's clear- I will choose free will
-RUSH- -RADIO- -MORE RADIO-
Simpeople and Me Archive- -11Dots Archive- My Sims World Archive
Like Mustluvcatz downloads? Help her out.
simsample 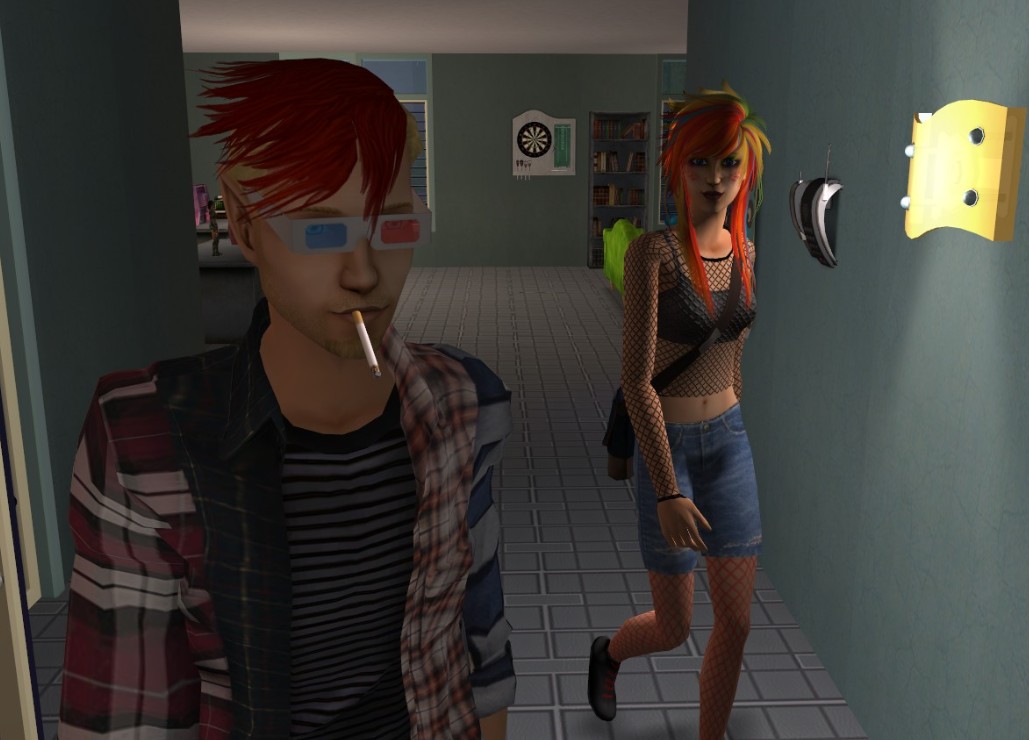 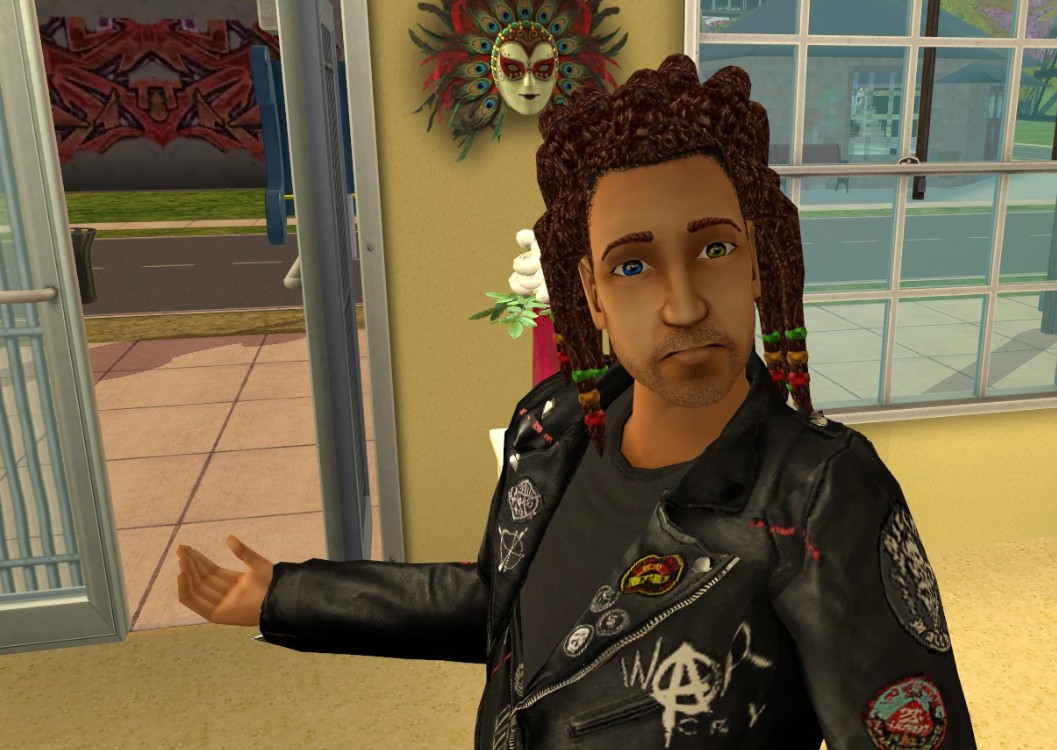 I will choose a path that's clear- I will choose free will
-RUSH- -RADIO- -MORE RADIO-
Simpeople and Me Archive- -11Dots Archive- My Sims World Archive
Like Mustluvcatz downloads? Help her out.
WatermelonSandal

More tweaks to Tony, including facial features, different facial hair and beauty marks, a scalp cap, and a hairline. Liking him a lot more now.

Also... Baroma Chaipatana: My Thai Sim. I originally started work on a Sim of the same name in TS3 back in February but idk where he is now. So here he is, more developed in TS2.

He might have the lakorn hair and outfit down but trust me he finds those shows tiresome. Also I've just realised he would probably benefit from a scalp cap as well. simsample, that's (this picture ) the first Sim I've ever seen smoking a cigarette! I find it incredible how socially unacceptable smoking has become in recent years. If technology had allowed a Sims game in the 1950s, smoking would have been almost universal. Starting to smoke was almost almost part of growing up. When I got my own flat in 1971, was uncertain whether to buy an ashtray or a No Smoking sign. I bought an ashtray because back then putting up a No Smoking sign could have been considered antisocial. I felt I had to provide an ashtray for my smoking visitors! Changed days!! I have occasionally smoked myself but never became a "smoker".

For the sake of historical accuracy, any 'hood set in the mid 20th century really should include lots of Sims smoking. My game has more than a hint of utopia in it, so I don't think I'll bother introducing "cancer tubes" (as a friend of my mother used to call them, as in, "Would you like a cancer tube?") to Veronaville.

On the whole I think the change is for the better -- some workplace environments used to be quite unbearable.

All Sims are beautiful -- even the ugly ones.
My Simblr ~~ My LJ
Sims' lives matter!
simsample

@AndrewGloria Hehe, yes it used to be that many smoked, I used to for many years but gave up around 20 years ago.

I worry though about how e-cigarettes are so common, we don't really know the long term effects. And they smell like toilet cleaner.

Also I am dismayed about how (in the UK at least) alcohol is so cheap, available and socially acceptable, and yet people who do choose to smoke are treated like social lepers! How can it be right that the government bans people from smoking in their own car, when they (and society!) freely allow people to be so drunk that they pass out in the street every weekend, and are then using NHS ambulances as taxis to take them to A&E? *Rage* I agree about the workplaces though.
That sim is called Curtis Moron, he is one of my Uni dormies. He spends most of his time on the bubble blower! The cigarette is just an accessory, but someone made a proper smoking mod once I remember... PC Sims or Carrigon maybe? Anyone remember? I think he's the only one I have with a cigarette, it just seems to suit him!

Edit: I just came across another picture of him, it seems that he even smokes in the shower!

I will choose a path that's clear- I will choose free will
-RUSH- -RADIO- -MORE RADIO-
Simpeople and Me Archive- -11Dots Archive- My Sims World Archive
Like Mustluvcatz downloads? Help her out.
Freefalldreams
Scholar
#687

Scenes from Strangetown Sixty-What (why yes, I do have a tendency to label everything...): 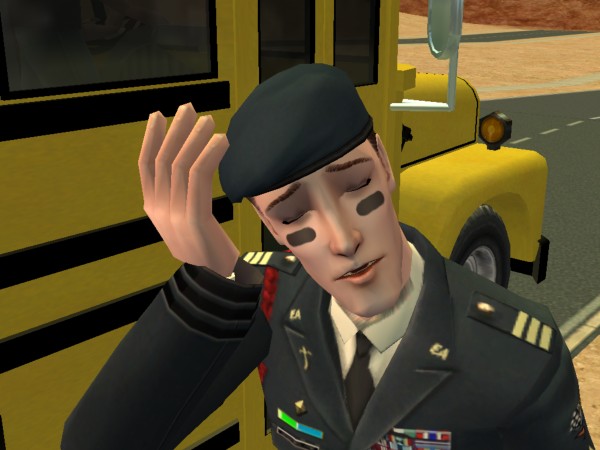 "Just because I almost dropped a spacecraft on a city does not mean I did anything wrong! That was a valuable mission and worth more than a little flood damage..." 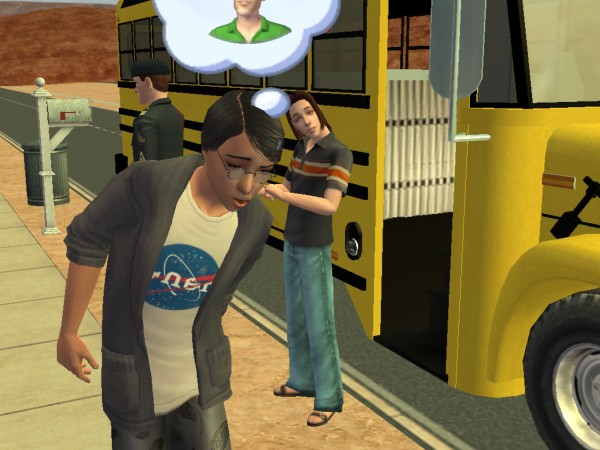 A valuable radioactive mission, thinks Pascal. Those people are going to be trucking in water for years...
Buzz Grunt's career-ending flub had just made every other bit of base gossip uncontroversial, much to the relief of the guy who had just produced a very not-human child and the other guy who had spent last night cruising Road To Nowhere in a funeral-home limo with the gravekeeper's niece.
(I definitely should have made the other choice on the chance card, given that the demotion would be much less disruptive to the storyline than Buzz getting fired. In my defence, however, there wasn't anything even resembling a shuttle for an intercept mission in the '60s. Or now, for that matter...

Of course, Pascal's SNASA shirt should really have the "worm" logo, but I want it enough to let a little aesthetic advancement slide...though we're going back to that logo too, so maybe I should try making recolours...) In which Buzz drafts the resignation letter he was informed might get him a decent foreign-service job rather than being sent to a combat zone. I name this kid Tycho for the first time ever in any version of my game, and he winds up with this hair? Can't bear to change it, but that is going to get the wrong kind of attention in this place and time...as if he wasn't getting that already.

I have no idea where this hood is going, but I'm going to at least try to hold out and keep playing the messy story it's spinning into until Chris Newbie releases Strangesttown. At least I had the courage to post these pictures, and thanks to the smoking conversation between @simsample and @AndrewGloria I'll also post in the Female Sims thread. I've got a picture I've wanted to share for a while there, but was concerned that it would get a bad reaction because it involves smoking... There are a lot of things happening in this hood that are not nice things, and I don't want to look like I'm romanticizing them when they're barely a sop at historical accuracy (I don't believe I can achieve true historical accuracy, and accepting that and making the best of it is part of the point of Strangetown Sixty-What). I actually have a No Smoking sign in my house, although only because it's a rental and the sign was here when we moved in -- I can't imagine anyone would light up in a house they're merely visiting nowadays. However, that was certainly not true in the 1990s and early 2000s; I remember visitors smoking during meals without even asking if it was acceptable, then putting out the cigarettes in their plates or cups when objections were made! Even in the mid-2000s, I had an older friend who adopted black cigarettes along with pink hair as part of her Gothish remake of herself, and my mother was happy because she now made a dramatic production of going outside to smoke and didn't chain-smoke because those were even more expensive than normal cigarettes.
Please support the Sim National Labs Folding@Home team!
Stuff I've made!
Sims2Christain

Trisha isn't gonna know! at least they're not wearing shoes on the couch.
Mischief Managed

Remus and Lyall Lupin
Remus Lupin and his father Lyall I'm back to the game after years... I'm so happy 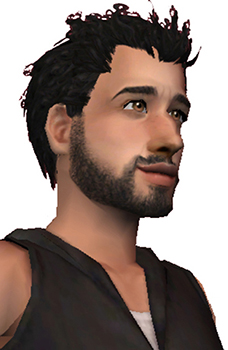 Please, sorry for my bad English..
Back to top