@WatermelonSandal its more than obvious that these overlays are done for Eaxis shape and didn't take on account sexy feet, you can remove it, editing its opacity map to delete the offending mark without affecting your maxis like overlays as sexy feet are mapped out of the standard map for Eaxis meshes, check the pic, to see how are mapped the sexy feet in the texture for all meshes that use them, on the right side of the texture are mapped Sole (up) and toe (bottom) for right foot, the copyright mark is over the toe area. 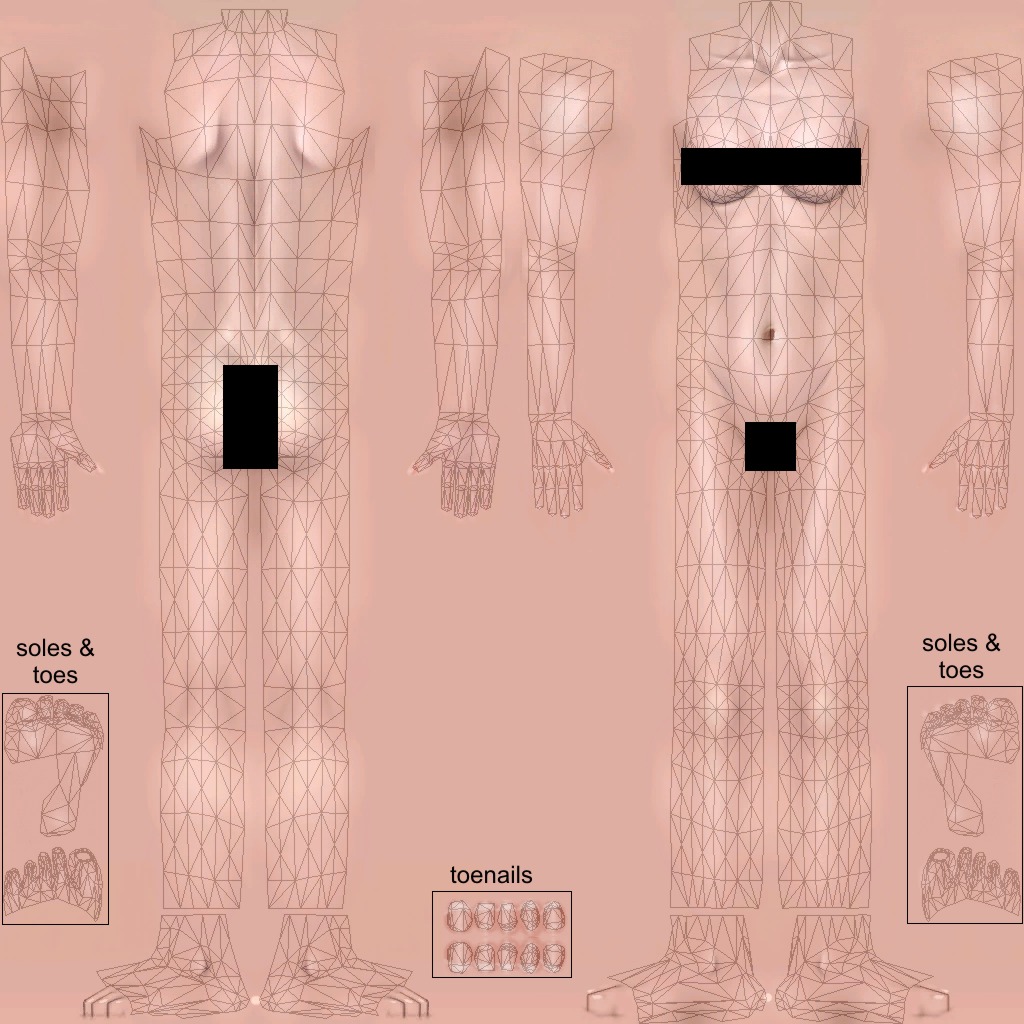 I'm not creating sims/sims stuff anymore, but I'm still in the creative path, check part of my current creations at my J.R.'s Angels page
Feel free to call me J.R., all my friends calls me in that way.
48y24rd
Test Subject
#2302 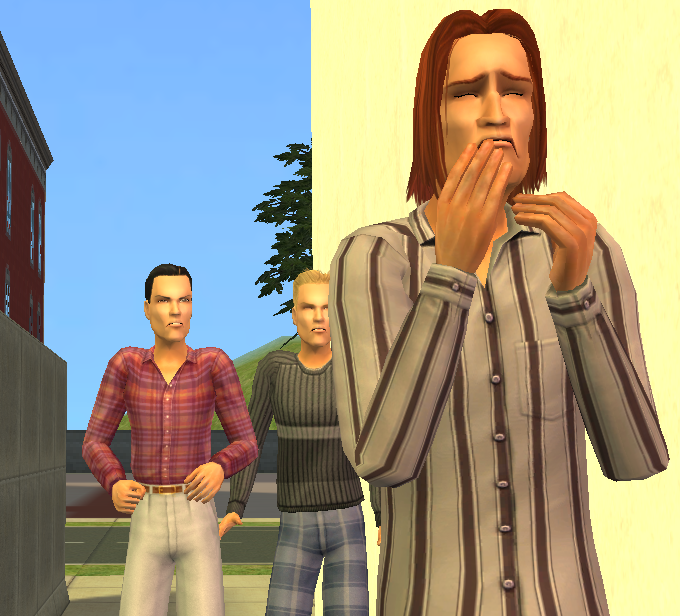 Komei Tellerman got bullied by Benjamin Long and Kennedy Cox. 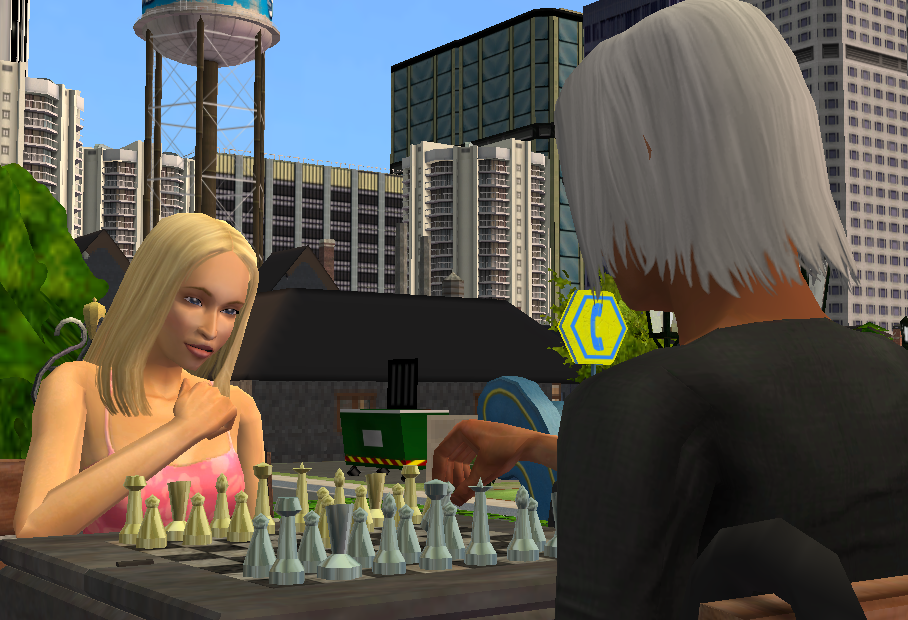 Marisa Bendett on a chess game with a downtownie in Downtown.
jotaerre

After several weeks looking into hundreds of backup DVDs, my favorite cop (Honda Today) is back to my game, and along him, my 2 fave police officers (guess their names) and a lot of homemade CC. (cars, paintings, sculptures, clothing recolors and more) 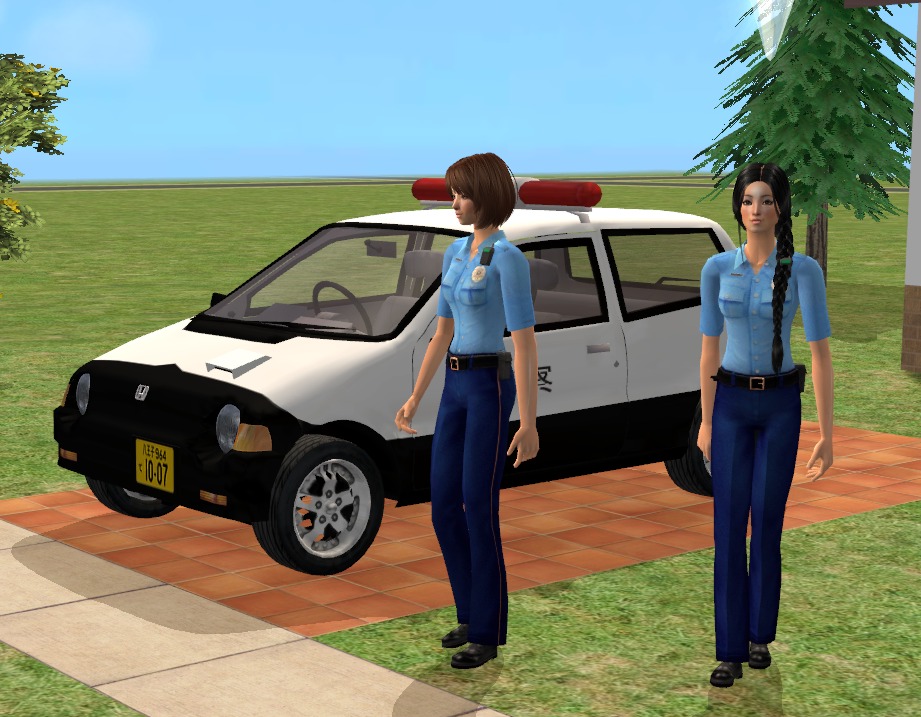 I'm not creating sims/sims stuff anymore, but I'm still in the creative path, check part of my current creations at my J.R.'s Angels page
Feel free to call me J.R., all my friends calls me in that way.
grammapat

I loved Vidcund's baby's face. The curious quads. A toddler that WANTS that toy! A deformed pregnancy bunp; hope nobody thinks their should be a "blur" --there is nothing to censor!
Namaste... or "go"
jotaerre

Quote:
@grammapat loves the quads' picture, sad it's too small.

This one got unused in a beta test I was doing for a fellow MTS member: 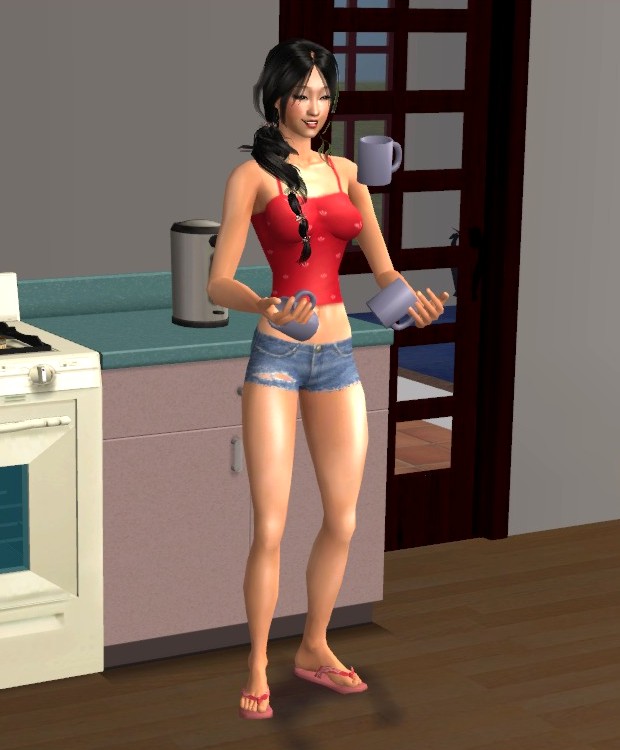 A couple more of beautiful cops, my flower girl Hanako as police officer and my Venezuelan police car, (sculpture version) unlike my minipato (Honda Today in my previous post to this thread) that never was available, this one had a drive-able version in my section at Back Alley Sims and also at VovilliaCorp since it was a join project, I did the remeshing/UVmapping, added the light-bar, fixed some non assigned bones and did this first humble texture, and Stephanrou from VovilliaCorp did several police recolors based on European police forces and NYPD. 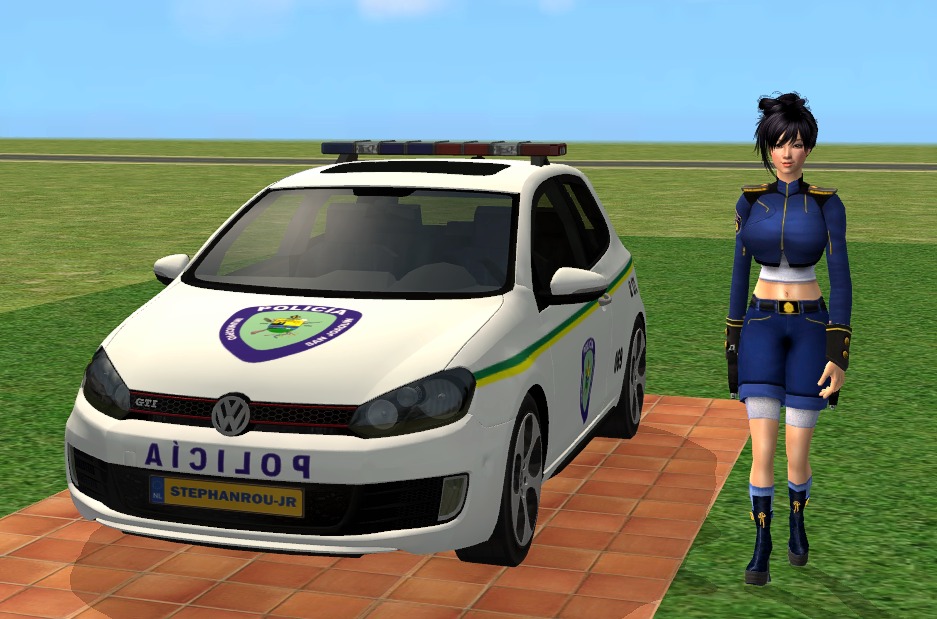 I'm missing BAS as it used to be my home in the sims community, now I'm a homeless old simmer.

I'm not creating sims/sims stuff anymore, but I'm still in the creative path, check part of my current creations at my J.R.'s Angels page
Feel free to call me J.R., all my friends calls me in that way.
grammapat

Jotaerre: Thanks for you comment. My pics are small because I use the simple "go advanced", rather than another hosting site.
Namaste... or "go"
Sechmet-The-Lazy-Cat One would think think that the nice head witch would have a cute familiar, but noooo.
k6ka

Mr. Humble traps himself with his own gift. 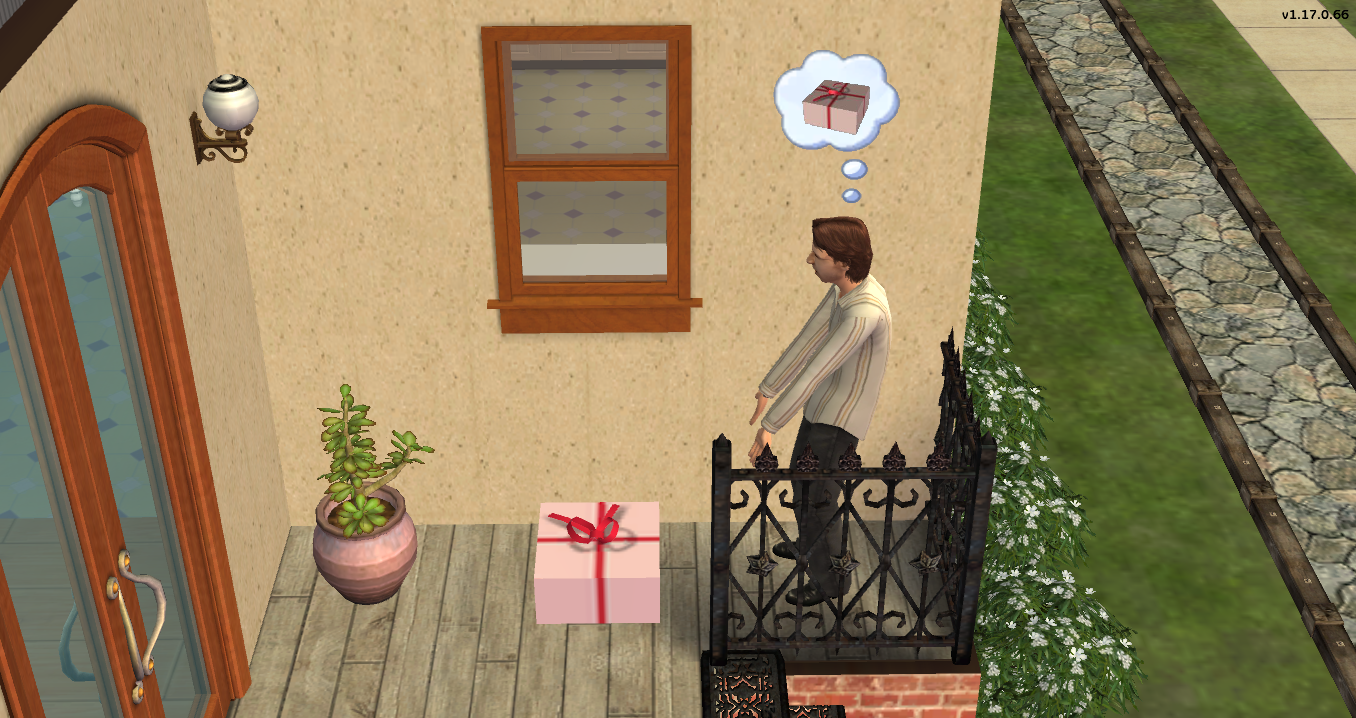 "I present to you—this fight cloud!" 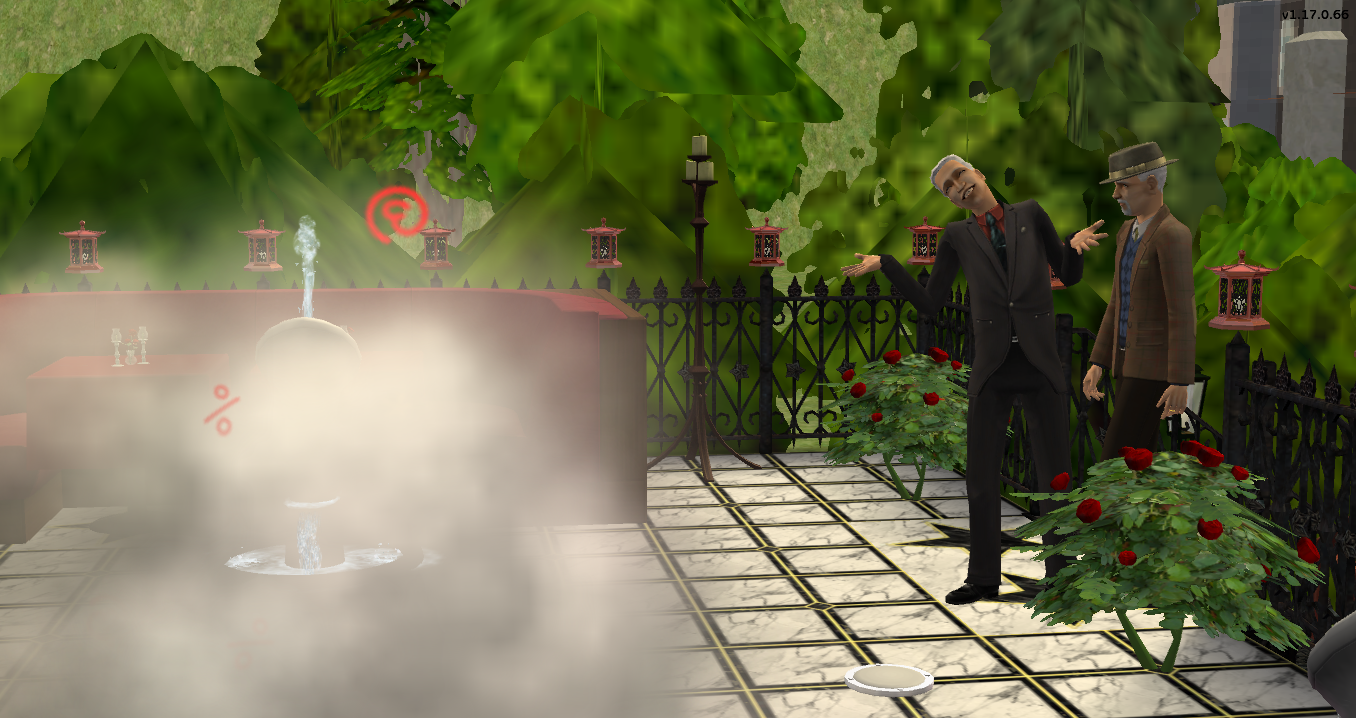 That face screams, "Yes! Yes!! I'll blow an entire month's worth of pay to buy this Noodlesoother!" 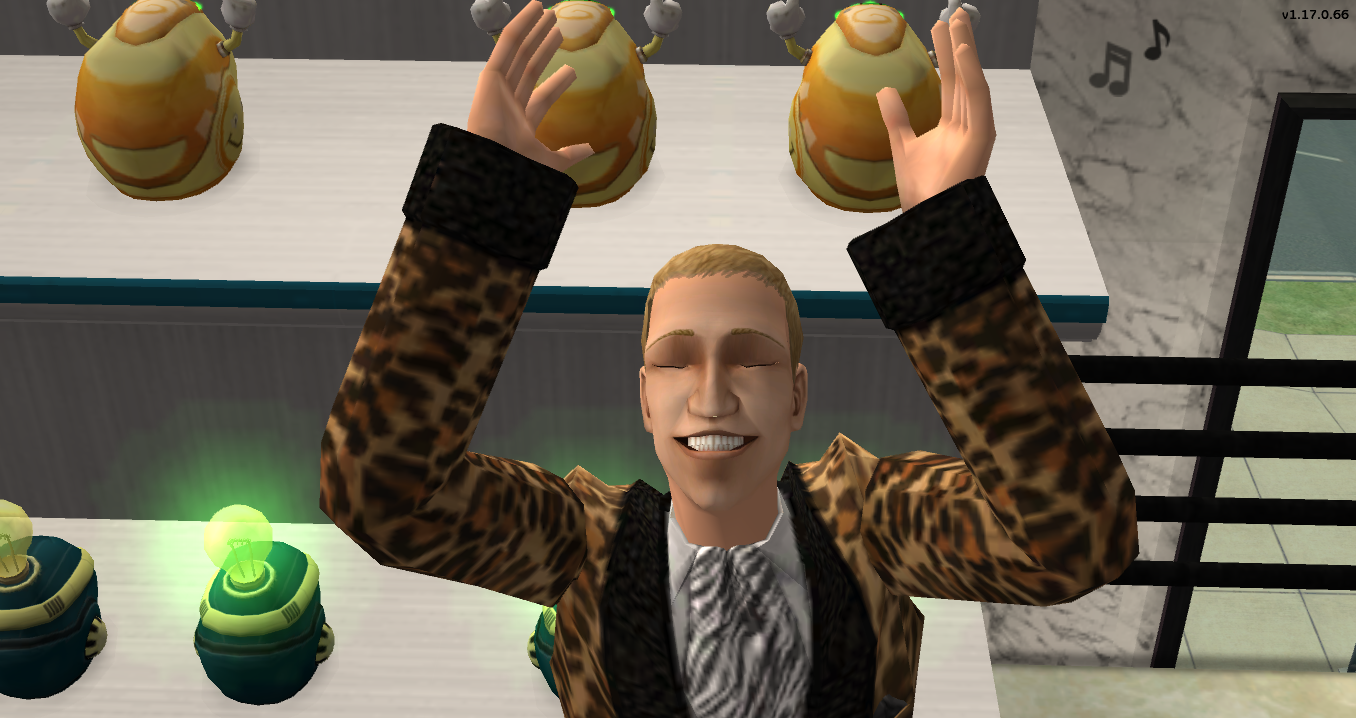 Already thinking of being a dad, kiddo? 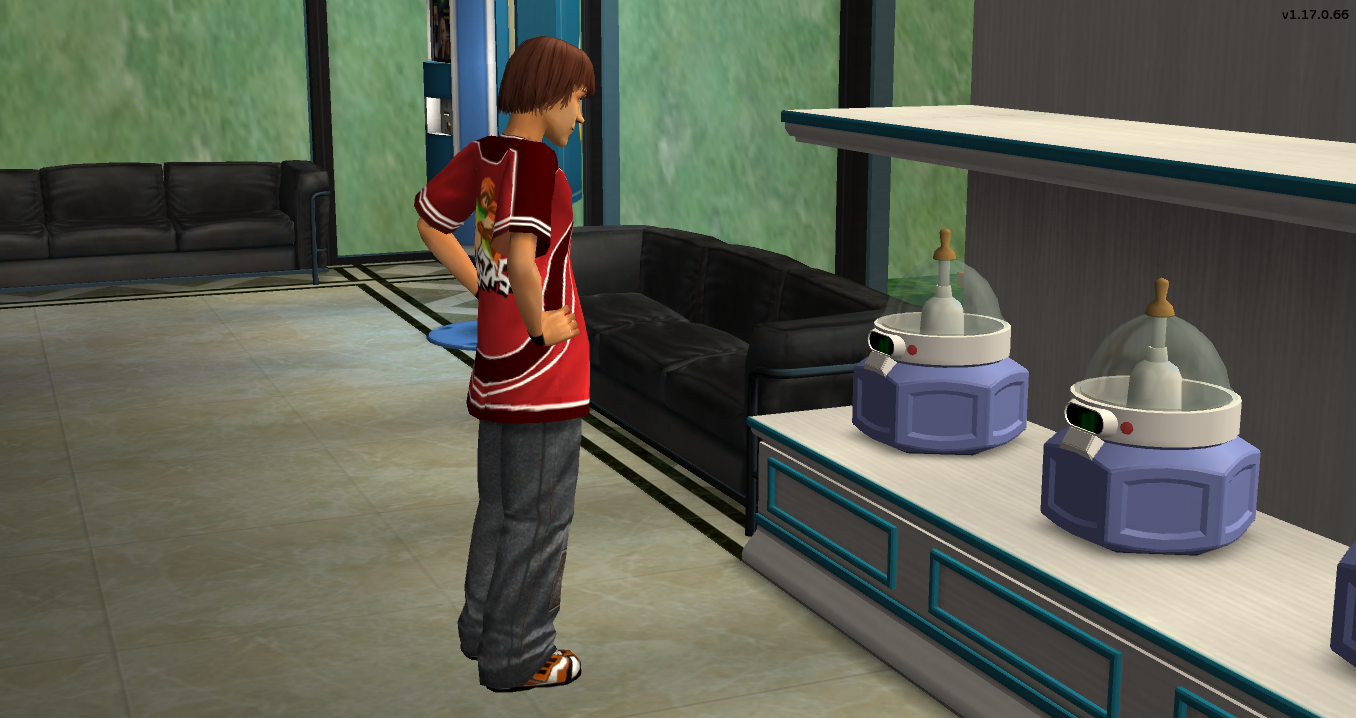 That's one way to dole out justice, I guess. 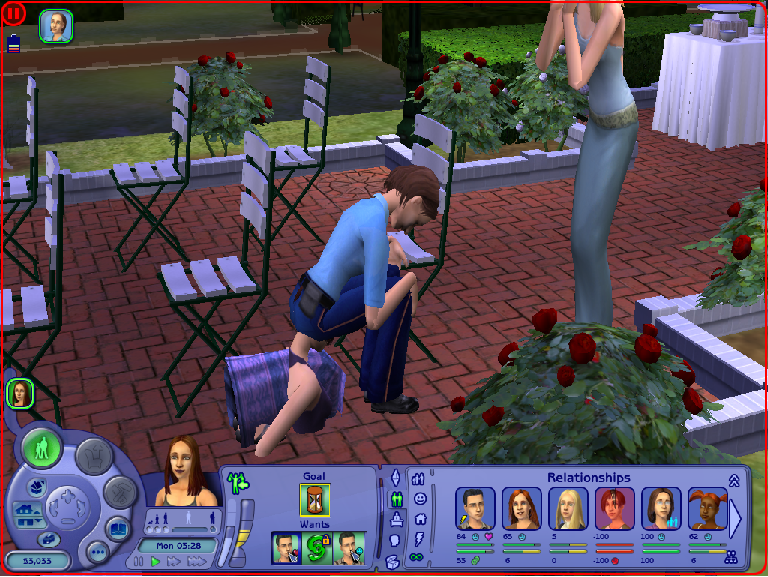 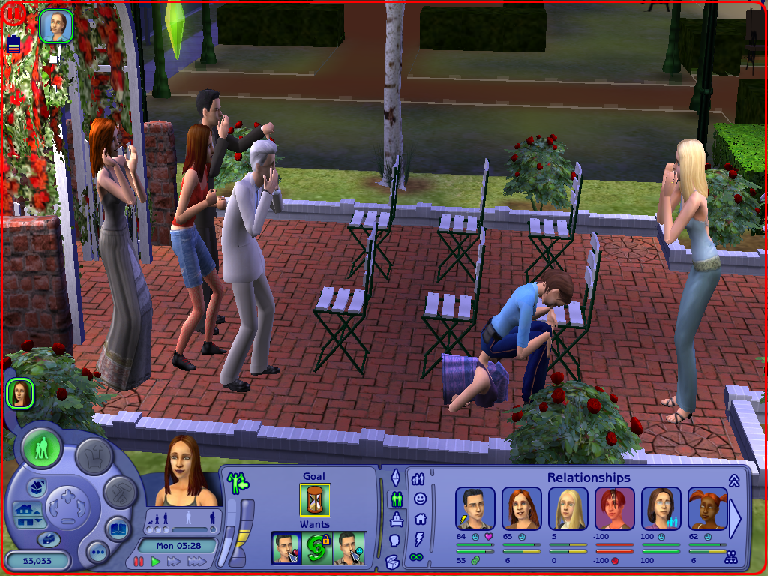 I thought about switching up the backdrop that I use for my Sim portraits, but can't decide which one I should use. One is another beach shot, the other is a grassy field.

Or I thought I could use a picture that's more 'leafy', as in more background foliage. (Really starting to take a shine to this one)

@WatermelonSandal I'd keep all 3 and use them depending on what I want to showcase, for example the boy looks very good with the leafy background, if you lit him just a bit more, he will jump to beholder's eyes, the girl looks great with the beach background, but if you switch their backdrops, none of them will be highlighted by the background, on the other hand, the forest one looks well balanced to me and well used, it could be a good "all purpose" backdrop.

Well this thread was done for sharing pics, then I should post someones to keep it going.

It seems Hikki and J.R., my ambassadors in "Old Town" are paying a visit to the Newbie family in a bad moment, when Bob is at work and Betty is busy, trying to get some bucks with a brush and an easel. 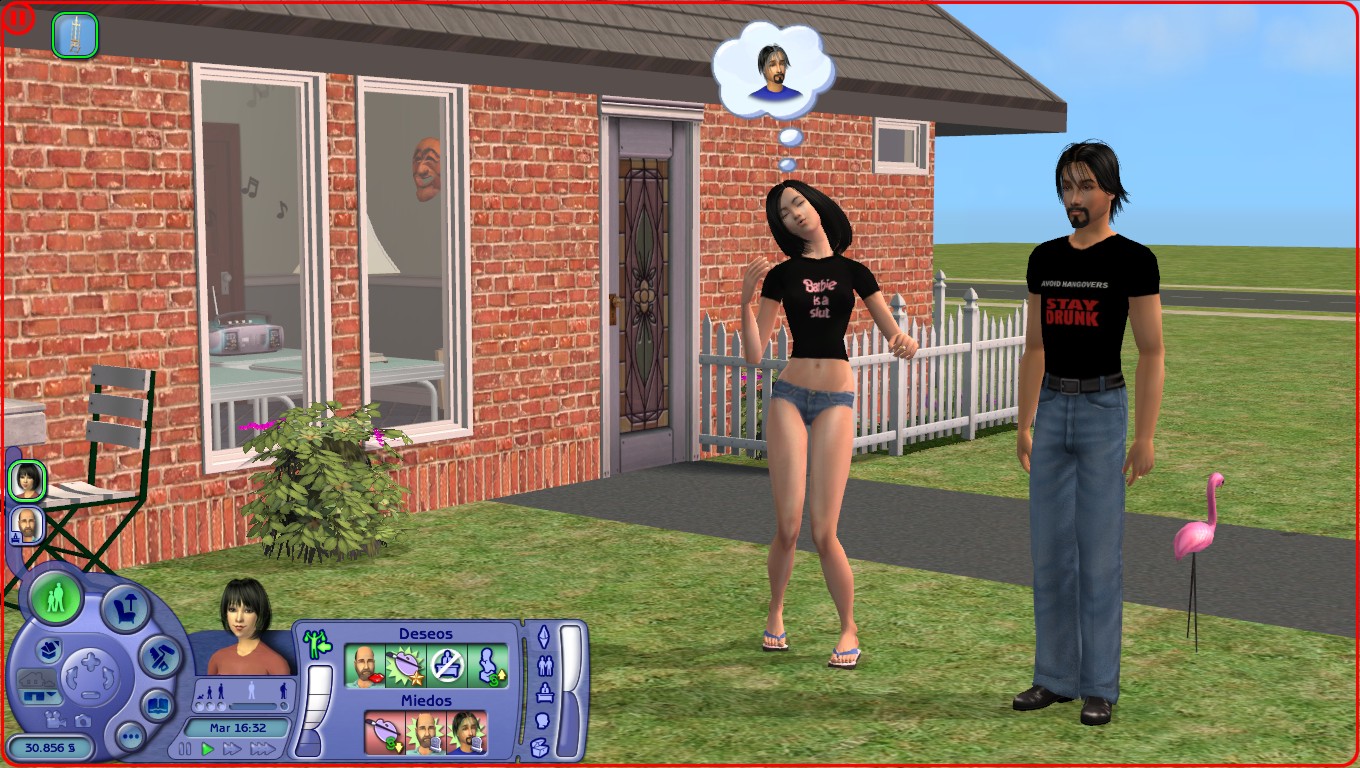 The funniest part are not my visitors funny shirts, it comes when Betty decides to stop painting and greet her visitors... 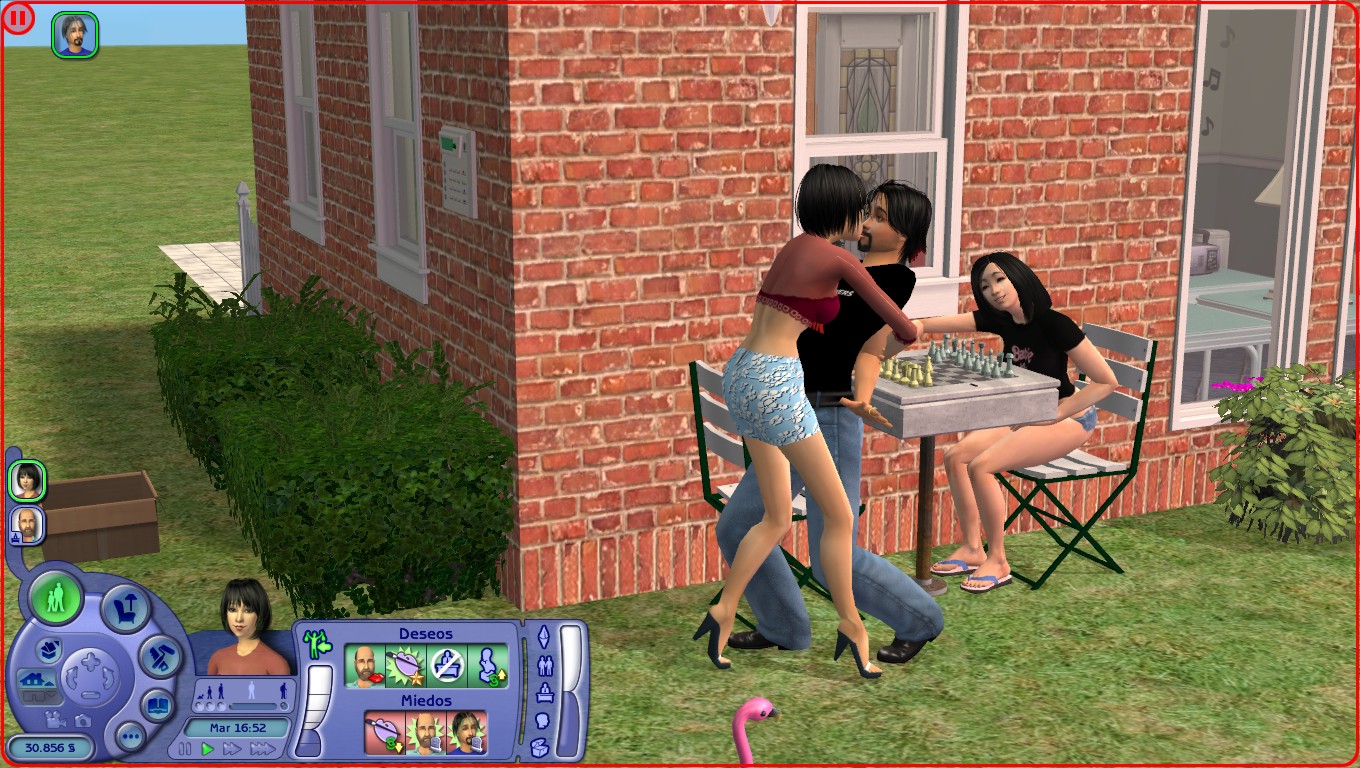 ....つづく
I'm not creating sims/sims stuff anymore, but I'm still in the creative path, check part of my current creations at my J.R.'s Angels page
Feel free to call me J.R., all my friends calls me in that way.
WatermelonSandal

Thanks for your feedback. I might do that, but my main goal is to have a backdrop that I use for all of my Sims portraits for a few months, then to change it again. I played around with the leafy one and brightened it up a bit. Preg guy is wearing an engagement ring - but he broke up with her! Maid runs into a guy trying to go up stairs...looks like her hands are...somewhere just wrong. And death through a window...
Namaste... or "go"
WatermelonSandal

Helloooo what's this on Maxis' bamboo? Jay and Tracy Hobbs getting up for the second day of the fall of 1841 in Dodge.What happened to their bed?
TadOlson's Blog
sugoisama
Instructor
#2317

A couple of weeks ago I downloaded Sunset Valley for the Sims 2. I love the way the creators made it, everything looks exactly the same like the Sims 3. It is an amazing work! I was only a little disappointed by the sims because the sims 3 traits can't all be represented by the sims 2 personality points (For example, Thorton Wolff can't be a "bad guy" in the sims 2 because he can't have "commitment issues" or "hate children"!) but I kind of expected that.
I started with the Keaton family because Justine starts the game pregnant. When I play the Sims 3, I always have a love-and-hate relationship with Marty Keaton (I call him "Master Cheater"). During one of my first games back in the day, I had a female sim who was in a relationship with him because I didn't know that he was married. When I saw the option to ask him to "break up with Justine", my sim never called him again and she married Leighton Sekemoto. Marty Keaton found her in town, he slapped her twice and... accused her of cheating

Quote:
Thanks to the amazing Sims 2 modding community, you CAN have traits for your TS2 sims now! Download the traits at the link below. That page should also have links to mods which use those traits. (Some traits may not have any mods for them yet.)
https://hexagonal-bipyramid.tumblr.com/traitsProject

Quote:
Simsample made a mod which fixes that texture problem.
https://modthesims.info/d/613530/no...exture-fix.html
Thanks to Crmelsimlover for sharing these rare Christianlov mods for TS2: Cpack editor with working face DNA fixer and Skin Selector Painting Prototype. Instructions for adding custom skins to Skin Selector at post #5 here. Instructions for using the DNA fixer at post # 2662 here.
jotaerre

Quote:
@RoxEllen1965 I forgot I had that mod or something like some time ago, thank you for reminding it.

I'm not creating sims/sims stuff anymore, but I'm still in the creative path, check part of my current creations at my J.R.'s Angels page
Feel free to call me J.R., all my friends calls me in that way.
WatermelonSandal

Oh my where do all these Sims keep coming from? Lol One thing that's fair to say is that I make a lot of Sims, not as many Simettes. Maybe it's influenced by the fact that the site has 697 Male Other Sims for TS2, compared to 2005 Female Other Sims, maybe not. Truthfully I've got a lot of male Sims in the works, but I try to make some female ones just to even things out. L-R:

Jamie: Shown him before, remade him a couple of times to get the facial structure I wanted. Adult now instead of a young adult.
Hayley: A bookworm who's quiet most of the time but fierce when the moment calls for it.
Kellie: Like to be honest but sometimes ends up speaking her mind and upsetting someone. Has a custom recolour of a Maxis BG top.
Juliana: An artistic girl from the town of Albufeira, Portugal, who left to find peace away from the tourists. Has a custom recolour of a Maxis BG top that I originally made for Ella.
Dmitri: (Might change his name later not sure) He looks like an ordinary guy but he's been through a lot. Uses a hair I liked the look of . Might change his outfit later.
Creator of Shields Road [TS2] - Carrer de Hebra [TS2]
natbsim75
Field Researcher
#2322

Hal Capp missed little Ariel's birthday because he was at work (Military career). The first thing he did the moment he returned home was to go to her room but she was already asleep. I confess that his creepy smile (photo 1) scared me a little at first but then he proceeded to do that (photo 2). Damn it, Hal, I almost

(I'm pretty sure Hal is going to be an overprotective-no nonsense-don't you ever mess with my sisters- kind of guy, I

Gen.Grunt was engaged to Erin Beaker, and suddenly realized that toddler Kim was the child of his dead son Ripp, so he was engaged to his son's girlfriend. How did that make HER cheating on HIM? True to his nasty nature, he slapped around his fiance - now pregnant with HIS baby!
Namaste... or "go"
jotaerre

Wearing footwear in a tatami, more than weird, I find it very rude.


I'm not creating sims/sims stuff anymore, but I'm still in the creative path, check part of my current creations at my J.R.'s Angels page
Feel free to call me J.R., all my friends calls me in that way.
Devon Aster
Inventor
#2325

I couldn't help but laugh at this. This Charlatan showed up and he just kept moping around like this anytime he wasn't doing his usual idles 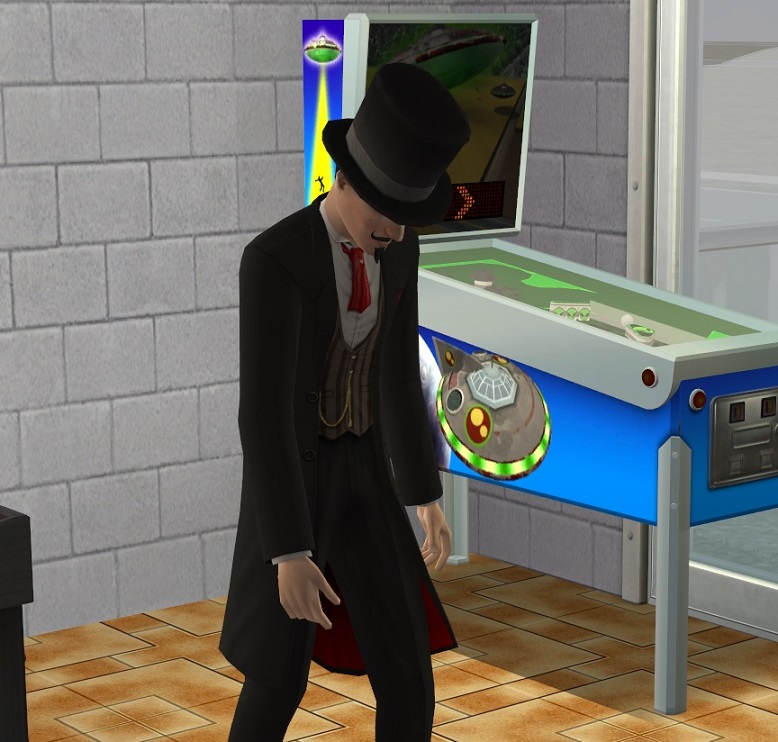