Base Game - Need help getting back into the game

Need help getting back into the game
Hi guys!

So I want to play again but I heard that the last update to the Sims 3 (base game), the one where you can choose which expansion pack to play, was fucked up. I even heard that some people cannot launch their game.

So can I get a direct link to download the update before that, or any recent update that's not fucked up?

And after downloading it, what do I do so that Origin doesn't force download it?

Thank you in advance.
Advertisement
orose

I think your only option is to either buy the CDs, or buy the digital downloads from Steam, which come with 1.67, which is the last good update before the origin one you're talking about, which is 1.69.
Side note, if you do buy from Steam, wait for their summer sale because it'll be $5 for the base game and each expansion pack.
Raggs Family Legacy (Rags to Riches Challenge) | tumblr | stuff site
tizerist

Yes, you can patch to 1.67 with the superpatcher link from MTS. But you would have to have an all-disc install with base game discs from before 2012 to prevent Origin from forcing you to patch 1.69 if it gets involved at any point. Or you would need to go with a platform like Steam or Mac that doesn't have the 1.69 patch. Of the two, Steam is HIGHLY recommended over Mac.

Then avoid Origin.
I am Ghost. My husband is sidneydoj. I post, he downloads, and I wanted to keep my post count.
Group for Avatar Makers* Funny Stories *2017 Yearbook
glad971
Test Subject
Original Poster
#5

Thank you for your answers, everyone!
Nat 619

I don't think my base game disc is pre-2012 because it does make me use Origin, but it doesn't make me use 1.69. It has me patch up to a certain point but I can deny the 1.69 update and then super patch to 1.67. It means I get nagged to update every time I launch the game, but again I can deny it. I reinstalled since 1.69 came out, so this does work for fresh installations.

Quote:
Patch 1.69 was refreshed/released three times. It wasn't until late in January 2016 that the patch became mandatory for Origin and newer disc-based installations. If you have been able to install using the post-Sept 2012 discs and still avoid the Origin-delivered patch, I would say that was quite unusual (and fortunate) from what we have heard everyone else report.

Quote:
Absolutely nothing. The patch is delivered by Origin only, not by way of the Launcher, and only changes the way in which the game starts up. If you don't use Origin, then you don't have it. The actual game files are exactly the same between patches 1.69 and 1.67 (and, in fact, 1.66), only the build numbers are different. Both patch levels, 1.67 and 1.69, are considered current for all intents and purposes.
igazor
NRaas Industries
Nat 619

Quote:
Well, that worried me, because this laptop won't last forever and a reinstallation is inevitable. So I decided to test it out on my other laptop. Now there's some other factors in play here, namely that Origin was already installed on this system (I play TS2 and TS4 as well), and I also carried out the installation and updates in offline mode. But... it worked! The version that the game installed was 1.42, and I then downloaded the super patcher for 1.67. Going back online with Origin, naturally I get this screen: 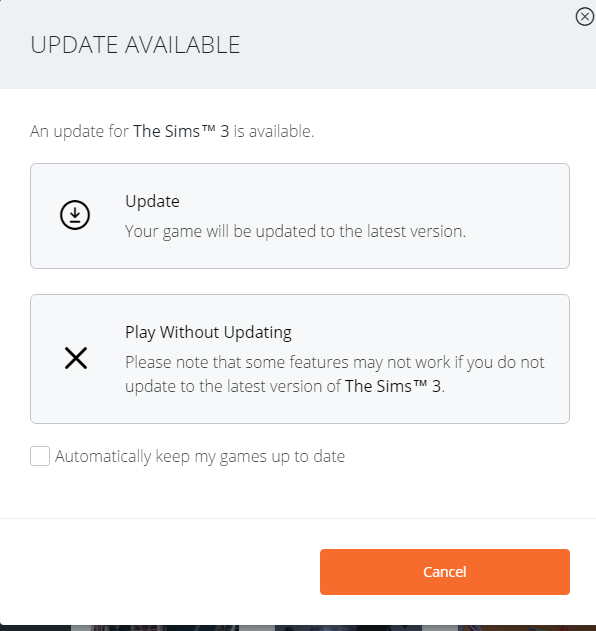 But I've been putting up with that for a couple of years now. And for final proof: 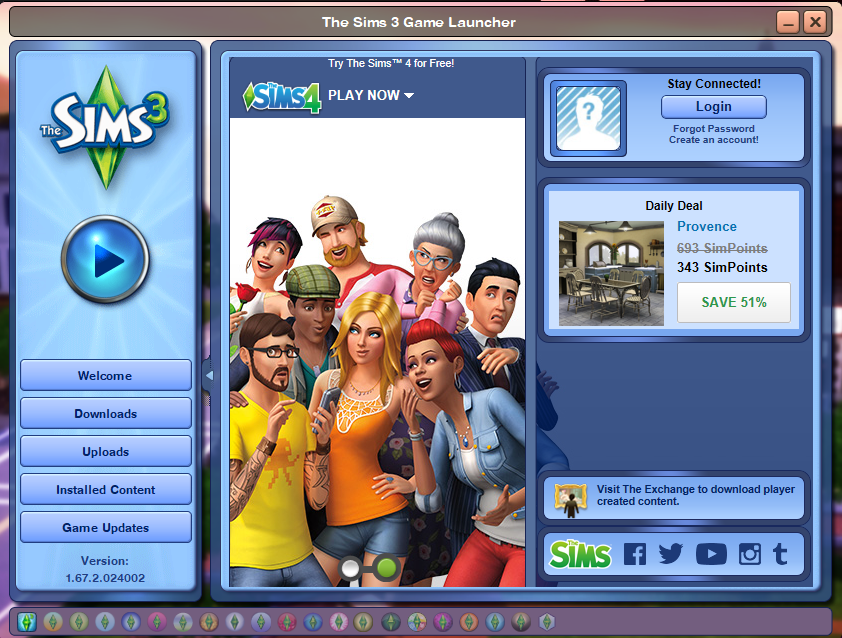 So unless any of the expansions (again, all on discs) would force this update, it seems you can get away without it. You'll still have to have Origin, of course, but it doesn't bother me.
Nat 619's simblr!

Quote:
The EP/SP discs shouldn't do that no matter when they were made, or so we have been led to believe. But patch 1.42 was released in October 2012. I suspect you have a base game disc that was manufactured just in time to let you get away with ...coughs...no wait sorry, I mean, that allows you to install the game the way in which you prefer. I'm not so sure that everyone on the later produced base game discs would be so fortunate. But to be fair, I don't even have a disc install as mine was all Origin until I got fed up with the whole system and switched over to Steam, so can only go by what players report.

We do know that if the player installs the much older EA Download Manager (EADM) if given the choice, that will do everything it can to update itself to Origin as the EADM was Origin's predecessor. We always advise players trying to stay on 1.67 to not accept the EADM part of the install, if they can and in case that's relevant at all.
igazor
NRaas Industries
Nat 619

Farrington-Gore story index
Back to top