Steelport Construction Report.
Hi there, since there might be some interest in this I decided to make this thread about how and why I'm making my Sims 3 World, Steelport. Some people might find it interesting or even use it as inspiration for their own worlds, I know that looking at other custom worlds did the same for me.

So how did this start? In 2010 I started working on my first custom world for my own personal use, called Maple Valley. It was basically a world similar to Sunset Valley with elements of Riverview and Champs Les Sims. I got pretty far with that and learned a lot about working with CAW, I'd say that I was about 80% done with it when disaster struck. Importing the world into the game for testing showed a major graphics bug, the terrain paint was FUBAR. Even my oldest backups, about 60 hours before the last version were corrupt.
I decided it was probably best to just stop and start over considering I did do some things I wouldn't do again in hindsight and since I started, Late Night had come out and I wanted to incorporate an Urban area in my map.

But life happens and it got put on the back burner, until 2012 when I got the idea to use the map of Steelport as a starting point to create my world.
If you do not know what Steelport is, it is the world in which Saints Row is set from the 3rd game onwards. https://saintsrow.fandom.com/wiki/Steelport
Since the city is set on a series of islands connected by bridges, this would be a good way to make various distinct different areas without it looking weird.
I made a brief start but that was quickly abandoned, again life happened and the idea was put on the back burner, refining the idea somewhat in my head over time.

This summer with some time on my hands I decided to finally get started again and finally make this world in which I can play with my Sims3 families for years to come.
First I took the original map and modified it so I could use it as a height map: 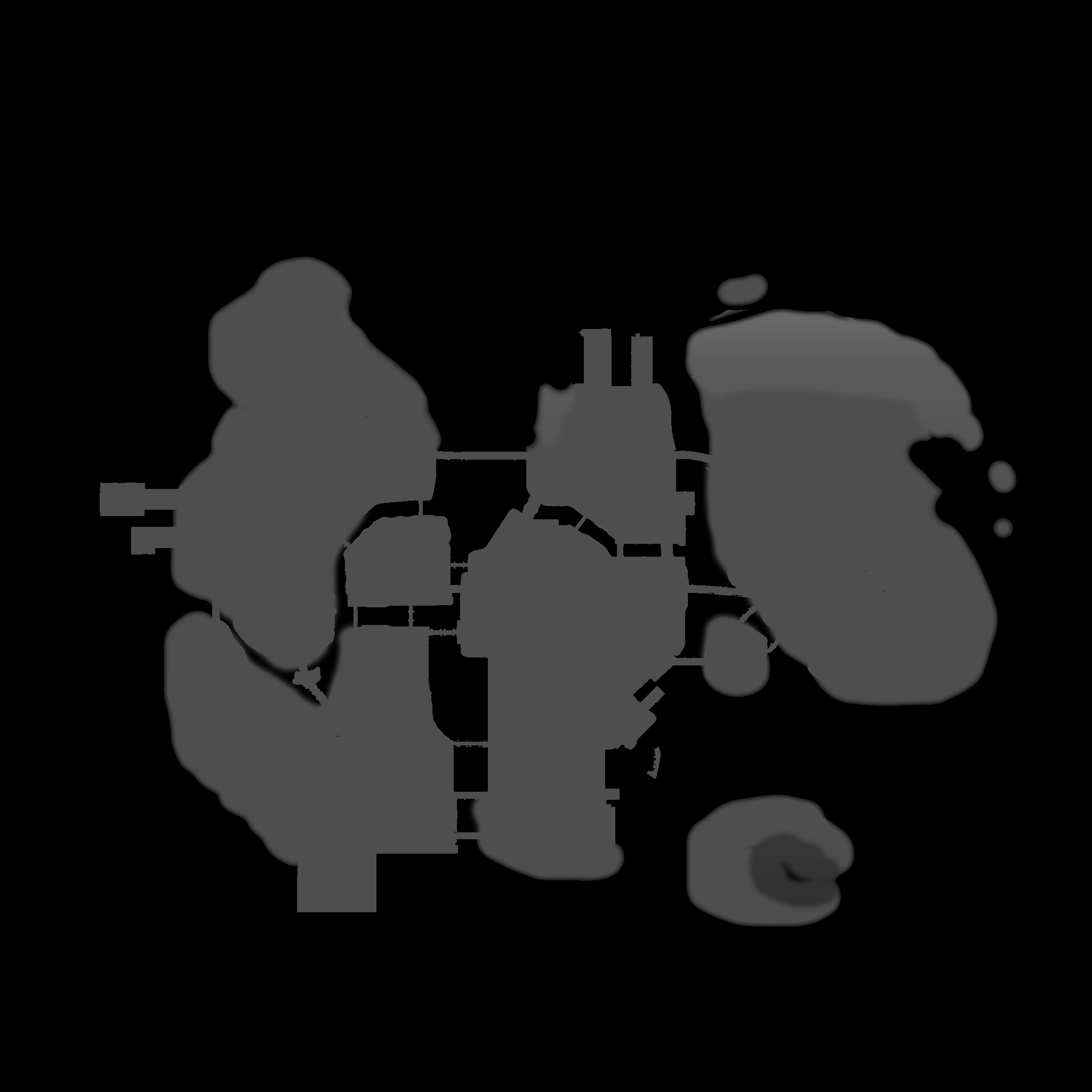 This was far more of a pain to get into CAW than it should be. Who would've thought that a piece of free software (Gimp) could do what an actually licensed piece of software (Paint Shop Pro) can't (saving a greyscale image as 16bit in Tiff format)
And so, many many hours later this is where I now am: 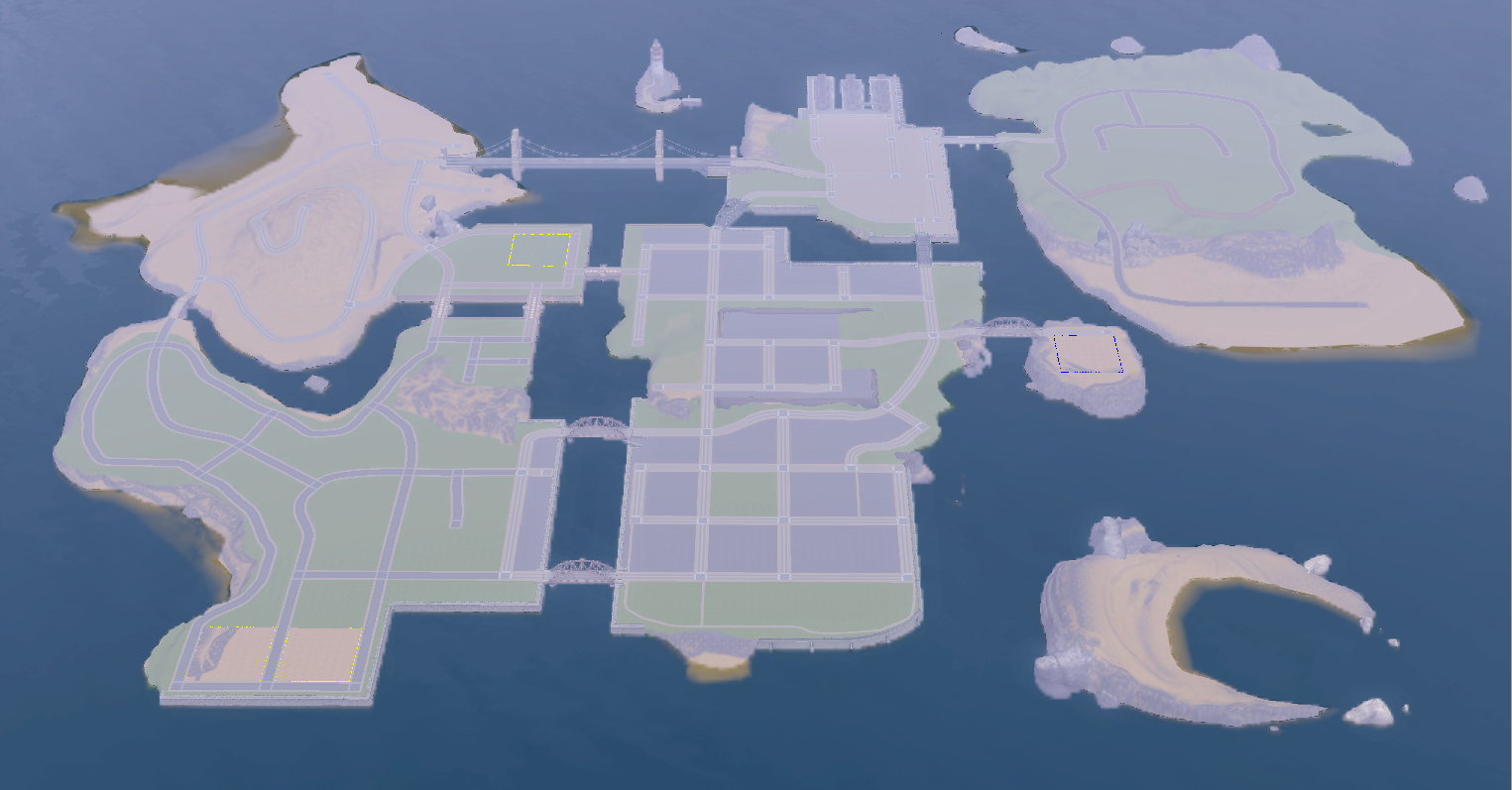 -The top left island (sand coloured part)
This is going to be a Malibu/Santa Monica inspired area. Beach side villas, a mix of modern and Art Deco lots with some resorts here and there.

-The green part.
The movie studio lot will be placed on this part of the island, around it some exclusive night clubs and a salon (ambitions). Maybe a bit of a Rodeo Drive look?

-Bottom left island.
This will be the suburban area, the basic bread and butter of the Sims for many years. The area at the bottom will have an amusement park/festival grounds and a sports centre where sporty Sims can come to play some football, basketball or ice skating on an indoors rink. Houses will take style elements from typical American suburbia but also from European style houses.

-Middle top Island. (small)
Lighthouse and a dock for a houseboat.

-Middle bottom island.
The urban area of town. The further south, the hight the buildings. The northern half will be inspired by urban development on the American East Coast so mostly a bunch of Brownstones. Further south is more of a Downtown area with buildings from Bridgeport and Roaring Heights. Going for a bit of a Downtown LA vibe.

-Top right island.
The top half will be a rustic rural setting, with little farmsteads and orchards. The middle bit will be mostly forest with only a few lots. the bottom half will be and area based on Sandy Shores from GTAV; https://gta.fandom.com/wiki/Sandy_Shores

-Bottom right island.
A nice private villa in the bay, and nothing else

Several houseboat docks will be placed around the various islands and I'm planing to have a bout 5 dive lots with a different feel based on their position. I'm hoping to have one near the military base with a crashed UFO

I hope you guys like this thread, any feedback is welcome. I don't know when I'll update this thread as I'm working on it "when I feel like it"
The Grumpy Old Gamer's Blog

~Life is like a box of chocolates, just when you're enjoying it, you choke on it.
Advertisement
AGuyCalledPi

I've always thought it was funny there's a neighborhood called Bridgeport in Steelport. I also learned a few weeks there's finally a new Saint's Row game in development, which could be good news because the last 3 games all used the same map with the same engine. It's a fun map but very small, probably not much bigger than Liberty City or Vice City in the older GTA games.
Hypocrisy is only okay if I do it.
( Join my dumb Discord server if you're into the whole procrastination thing. But like, maybe tomorrow. )
daisylee

This looks like an excellent start and I look forward to seeing more. A mod may move this to the uploads section for feedback. Glad you are back working in CAW again.
Back to top