Sims 3 Horror Story
This message has been deleted by Swetty sim. Reason: .
MurderPrincessK

This message has been deleted by Wojtek.
alljoj Candi and Cocoa. The purest sisters to grace the earth with their presence.
southparkrocks

My latest incarnation of Elvira and family, now 5 husbands and 11 children including a teenage daughter with the same housekeeper/nanny. Portrait made sepia toned for added old-timey appeal.

Seated on sofa in the back: 16-year-old eldest child and daughter of Elvira and Charles II of Spain, Margaret Theresa, holding the youngest child and her half-brother by her mother and stepfather Kylo Ren, 8-month-old Baby Kylo, Baby Kylo's father, Kylo Ren, a meteor ghost, Elvira, Scarlett the servant holding half of Elvira and Charles's 3-year-old twin boys, Baby Carlos.
Standing behind the couch: Brahms Heelshire, Burn To Death ghost.
Standing to the right of the couch: Wolfgang Amadeus Mozart, Old Age ghost, dancing with 4-year-old son Amadeus Jr.
Standing next to Scarlett: 11-year-old adoptive daughter of Elvira and Dandy, Renesmee.
Standing on the left with other twin son on his shoulders: Charles II of Spain, Old Age ghost, holding on his shoulders 3-year-old son Jose.
Dancing on the left: Dandy Mott, Watery Grave ghost, with 2-year-old daughter Mara.
Sitting on the couch and chair in the front: Brahms and Elvira's 8-year-old son, Brahms Jr, Elvira's 6-year-old heir by Satan, Damien Lucius, Elvira's 5-year-old son by Pumpkinhead adopted by Charles, Tommy, on the chair is Elvira's 4-year-old son by Dandy, Jim.
jeaninekishlive
Test Subject
#430 that was confusing but yeah, that's them! A set of triplets, two sets of twins, and a baby!! whew, that was a handful for me!
Sadly this family has majorly passed away of old age as they are an old save, the only ones left alive are Sammy and Mikaela. Kathleen died most recently. I was actually crying.
RomerJon17
Scholar
DELETED POST
26th Sep 2016 at 3:35 AM

Not a family, but they're so close they practically could be. And now they're in the 80s for some reason...they usually aren't, you see. insert signature here
( Join my dumb Discord server if you're into the whole procrastination thing. But like, maybe tomorrow. )
Pillowkitty6

It isn't exactly everyone standing together for a photo. (I'll do one of those at some point.) Was loathing redoing the photos as this is more a version... 3? Lots of changes though and I wanted the animals to have their own.
Quote:
lfria 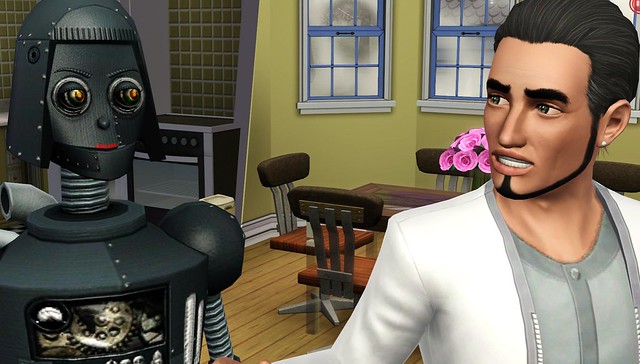 Small family because I'm doing the RLC and rolled single parent with only 1 child. I made up for it by having a bunch of cats!

Also I keep getting this broken image icon when I try to post the image directly (uploaded with imgur) and not as an attachment, why is that?
Harris Random Legacy Challenge
SeptemberSimsForum The Smyths (left to right - Amber, Caleb, Valentina, Heather, Milo and Hana). Caleb met and fell in love with Valentina when he was in his twenties and she was in her early forties, recently divorced and living with her teenage son, Milo. They went on to have two daughters and Milo grew up and fell for his childhood friend, Hana.
AGuyCalledPi

Quote:
Good for you, then, @Hellfrozeover, that I made another one. What you're probably not seeing here is that in both pictures the lot is also furnished appropriately, but that I've completely redesigned it in the second picture because I realised it wasn't very good.
I've done my research now, particularly into high-end interior design trends of the late 80s, so it should look much better now.
insert signature here
( Join my dumb Discord server if you're into the whole procrastination thing. But like, maybe tomorrow. )
TheSweetSimmer This is my longest family I've been playing for, nearly about 600 days I think but in reality almost 3 months.

Also from left to right Levi, Zoe, Renee, Kendra and Andy and on the top is Rae.
- When one gets inspired by the other, the one inspires another - Anything is Possible.

My Discord server (mainly Sims but other games are welcome too) ---> https://discord.gg/tvrTafF
You can download a lot of my custom animations (for TS3) on my Twitter ---> https://twitter.com/SweetSavanita
gittevdv

Sorry - huge bump! I've been playing with a family in a while and finally made a family picture. 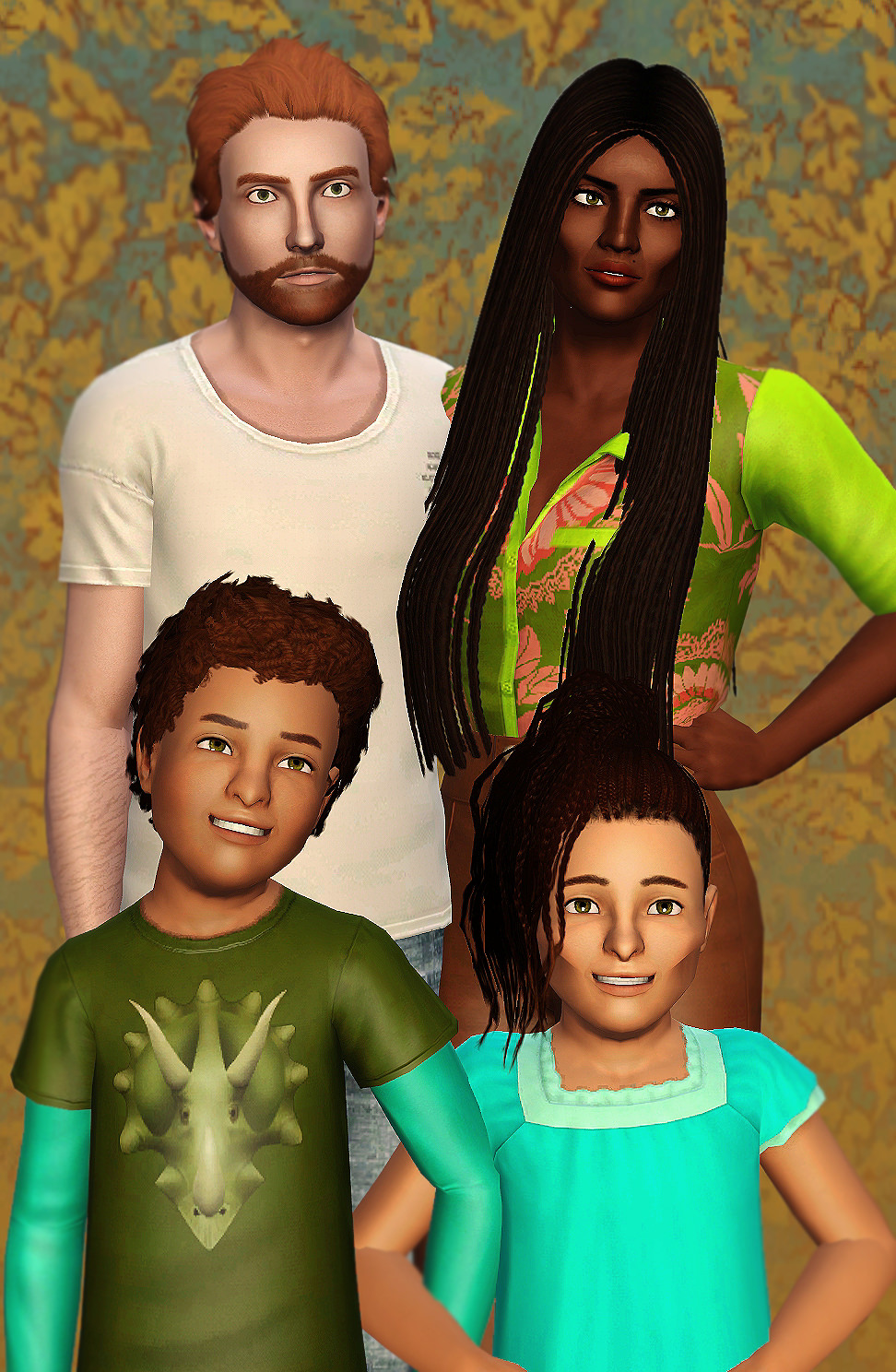 Behind the scenes:
Connor: Do I really have to be on this picture?
Taliso: It's a family picture, you're part of the family.
Connor: I don't like it.
Taliso: Just smile, like the children do. Look!
Connor: ....
Taliso: Smile!
Connor: ........
windermeresimblr
Field Researcher

Does it count if only two of the sims are related, and one I hope to marry into the family unless the story goes in an alternate direction?

If the caption doesn't show, which it may not since I am a bit inept sometimes:

My attempt at creating the main trio from Interview with the Vampire by Anne Rice.
Louis, Lestat and their "adopted" daughter Claudia. 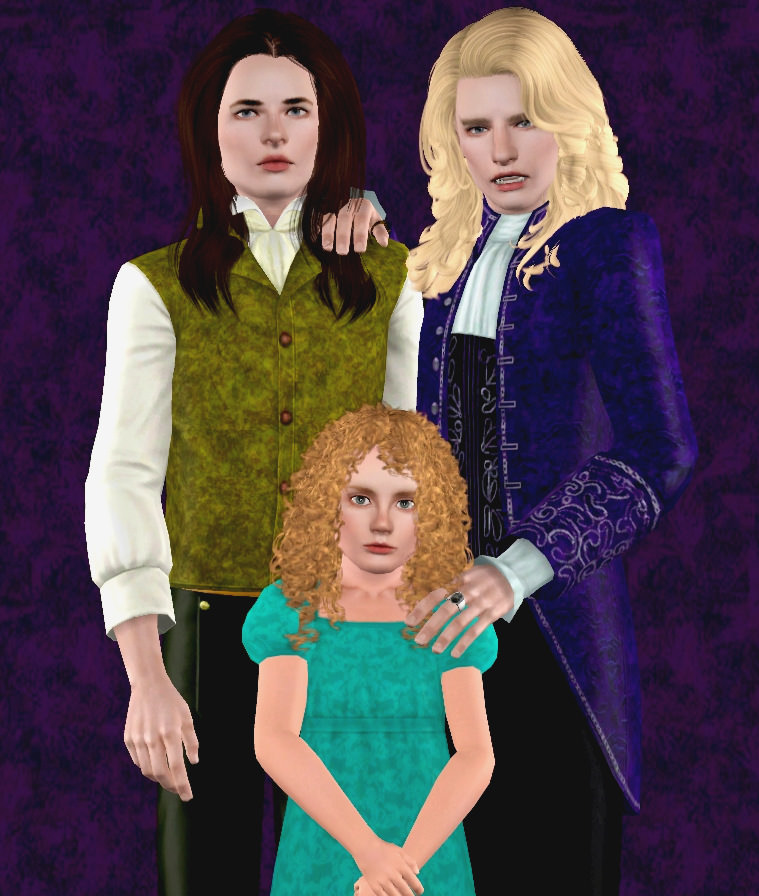 This message has been deleted by Wojtek.
moonlight__
Field Researcher
#443

The Derrickson Family
This is the longest family i've ever played, two and a half years, with breaks of course. The kids are the third generation. Robert, the father is a politician and his wife Kimberly is a former model. Angelina, the albino girl is a cheerleader and a ballerina while the boy named Ethan is a skater who loves hiphop, the two of them are twins. The black-haired girl on the left is Hannah, which is my favorite, is a rebel dreaming to become a rock star. I like to take this portraits overtime to compare to how my families looked before. This message has been deleted by Wojtek.
kamirura

I'm currently not playing sims, but I was backing up my old families (just in case) and found out a lot of screnshoots. This is the last family I was playing, The Bejeweled's, it's a legacy-rainbowcy-random challenge, all at once lol (I was also thinking in use supernatural too). Mother's name is Diamond (she is ya and also a albino), father's is Red Beryl (he is also a wizard), oldest daughter's is Turmalina and twin toddlers' are Hazel (the girl) and Opal (the boy, also a wizard) if I remember correctly their names. I took multiple shots to make a bigger picture but forgot the size and there was a gap in the screenshot so I had to make this weird banner stuff. 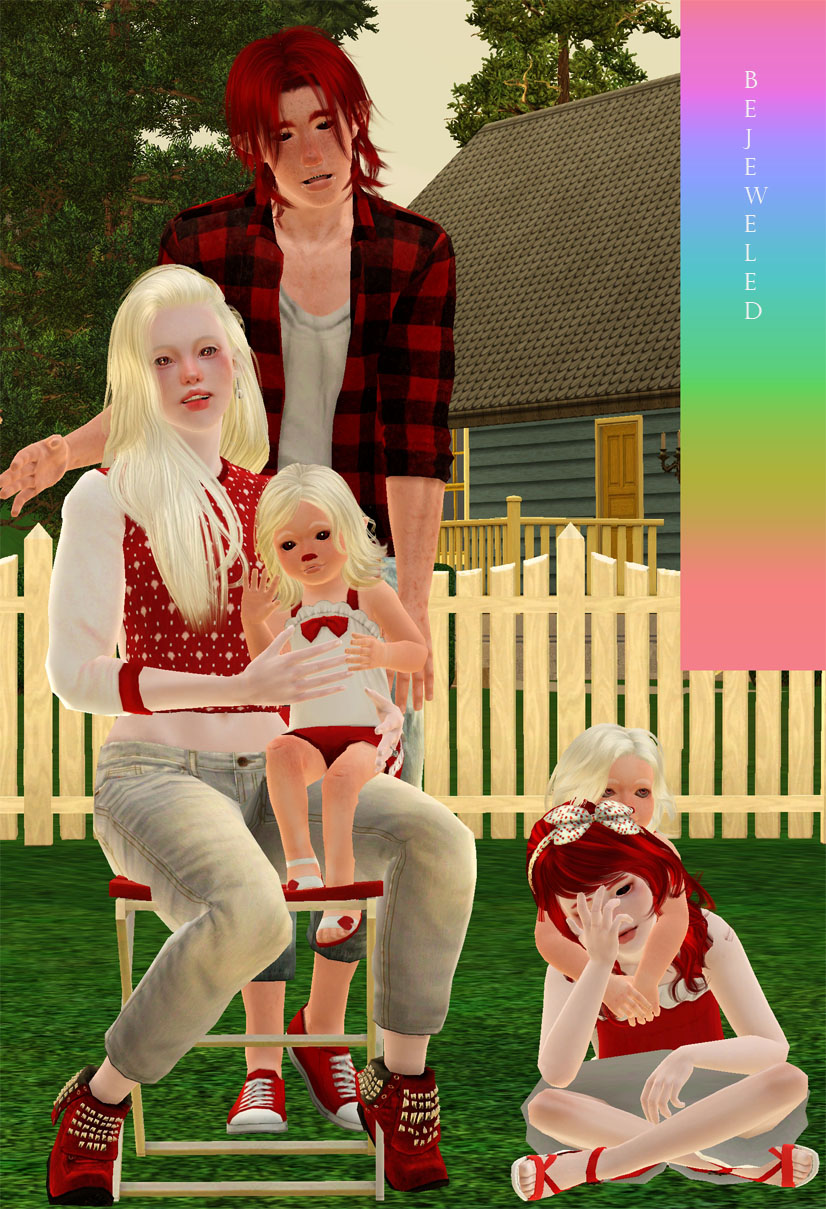 Idk if I'm in the wrong thread but here's a pic of my sim (in the center) and her Rebel (social group) friends from her sorority.

*i posted her family portrait before on this same thread

Edit: I later realized that the redhead kinda looks like Elsa Hosk and the big girl like Becky G lol
[missing pic I'll re-upload when I can]
Wojtek
Instructor
DELETED POST
19th May 2019 at 2:24 AM

This message has been deleted by Wojtek.
Wojtek
Instructor
DELETED POST
19th Jan 2020 at 1:35 AM

This message has been deleted by Wojtek.
mightyena
Lab Assistant
#446

A little family photo of Jake and his family: 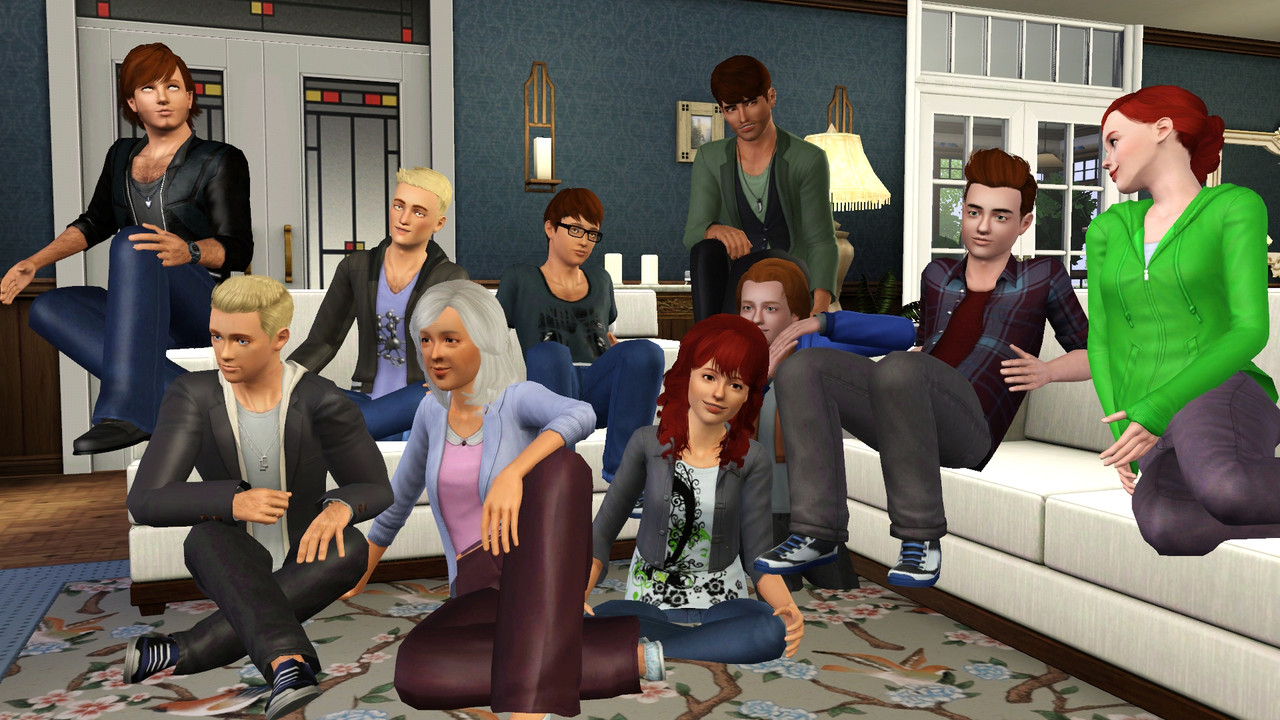 From left to right, we have:
Jake, Jake's husband Coy, their son Tanner, Jake's mother Mary, his son Daniel, his niece Emma, his brother Benjamin, his nephew Eoin, his nephew Paul, and his sister-in-law Julia

This message has been deleted by Wojtek.
mightyena
Lab Assistant
#447

Back in time, to when Benjamin & Julia just got married. Emma is a toddler, and Julia is just pregnant with Eoin and Paul: 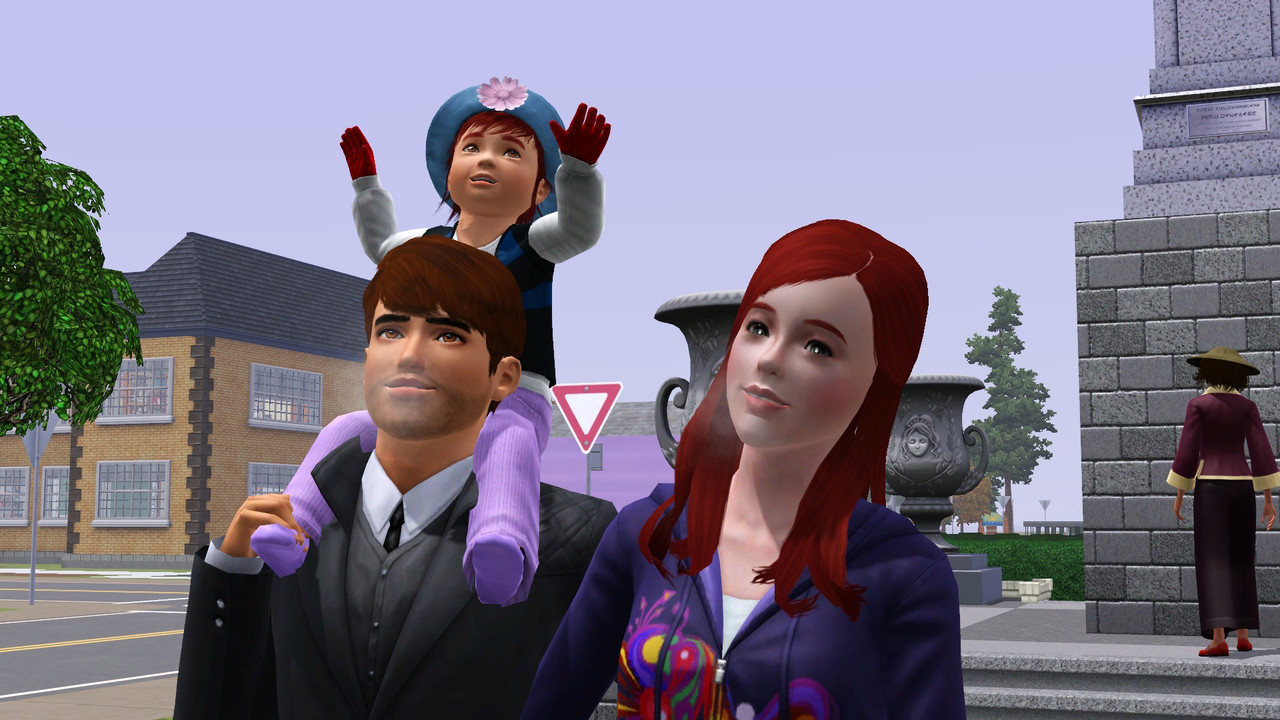 I tried my hand at creating more diverse families in The Sims. 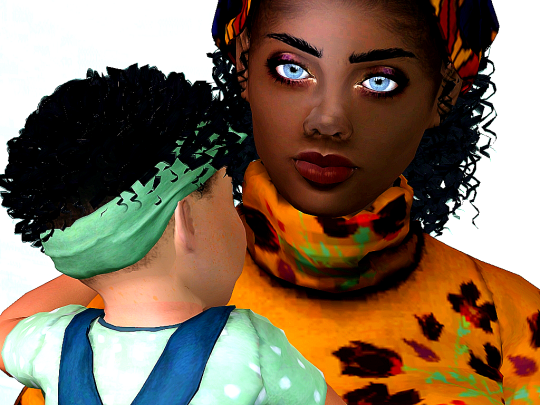 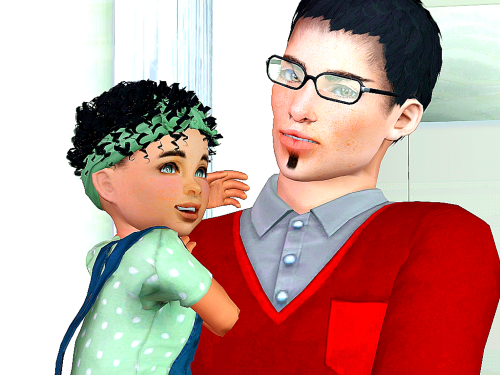 I'm ashamed I can't remember his name but they both are great parents.
Wojtek
Instructor
DELETED POST
16th Apr 2020 at 9:31 PM

This is my most recent family portrait. Every child looks mostly like their mother, I guess she has the stronger genes. May's hair color is inherited from her grandmother on her father's side. 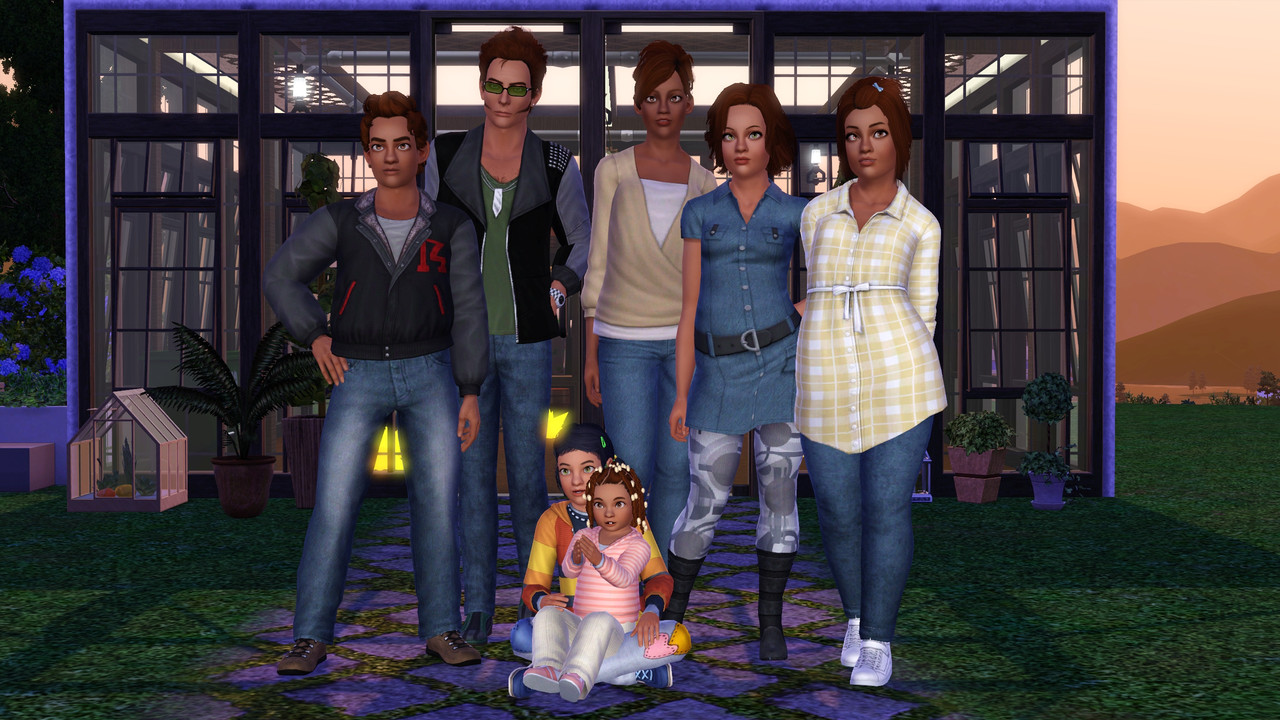 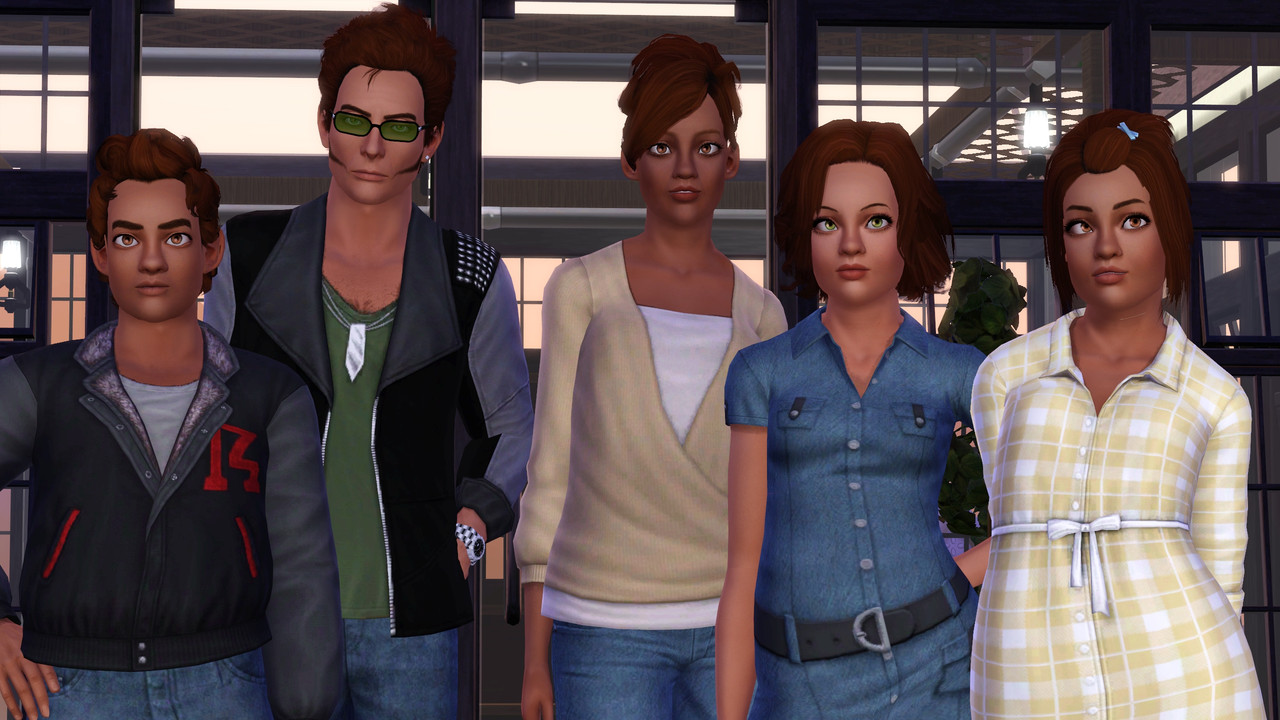 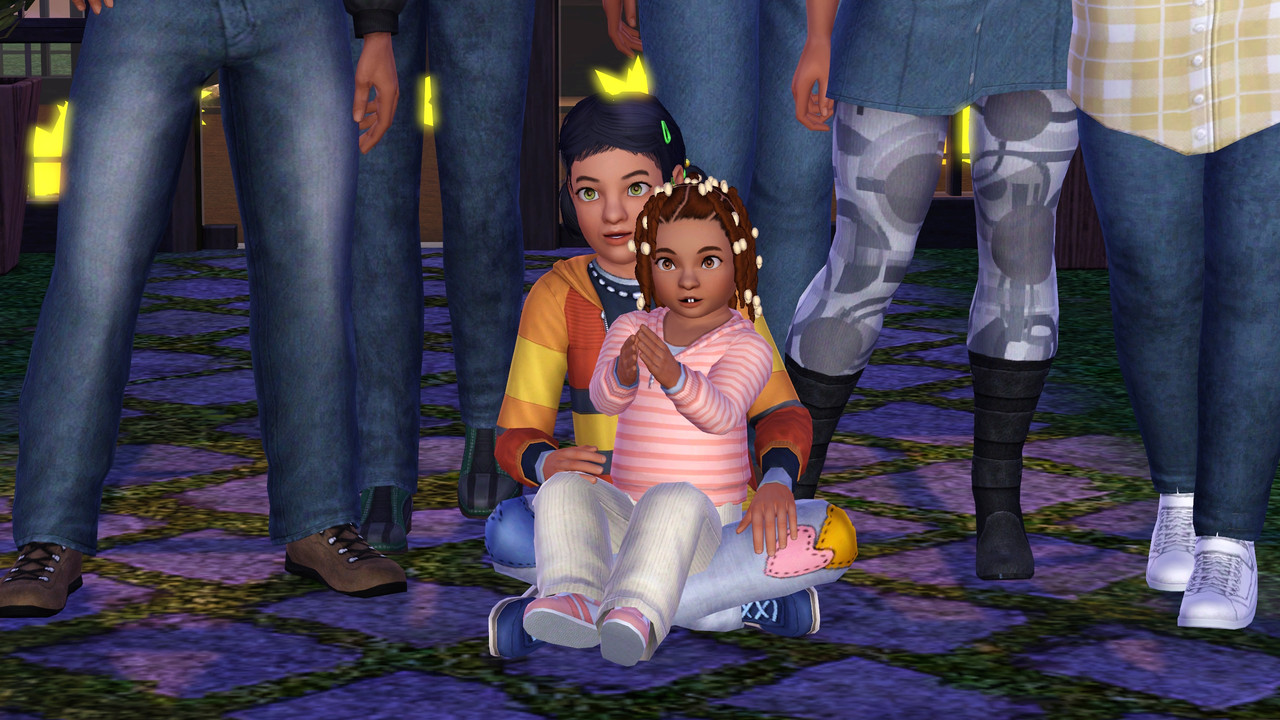 Twins selfie at Greenbeard's Fishing Spot and Bella Vista Beach in Isla Paradiso. Thought since I would end up having them go their separate ways I wanted a photo of them together. They have other siblings that are also twins but those twins don't really get along much at all, lol. And the other pair of twins I don't know, it's been so long since I played with the main Rumbaa family. Most of everyone has gotten older. 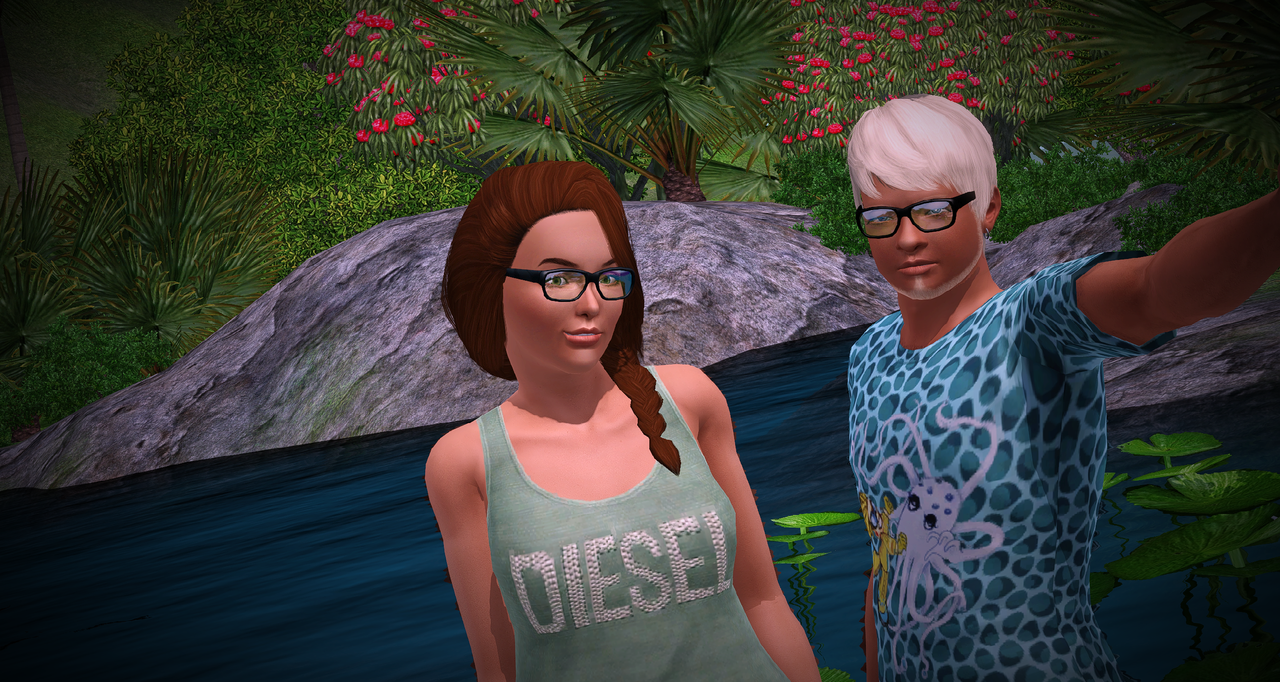 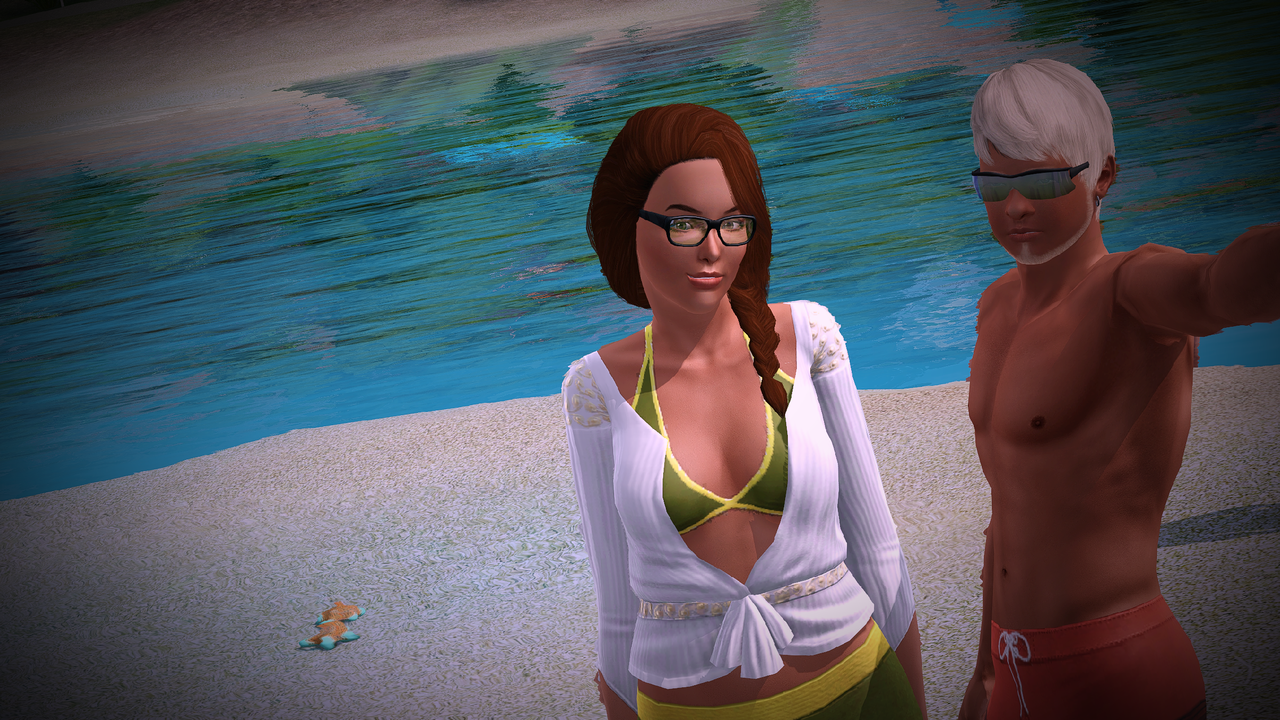 They didn't always get along but hopefully they will remember the good times as well. I'm hoping that they will eventually find someone to marry and expand the family even more. According to my age chart they are currently 27. Seeing how long my life spans are they have a long time to meet new people or to reconnect with others. 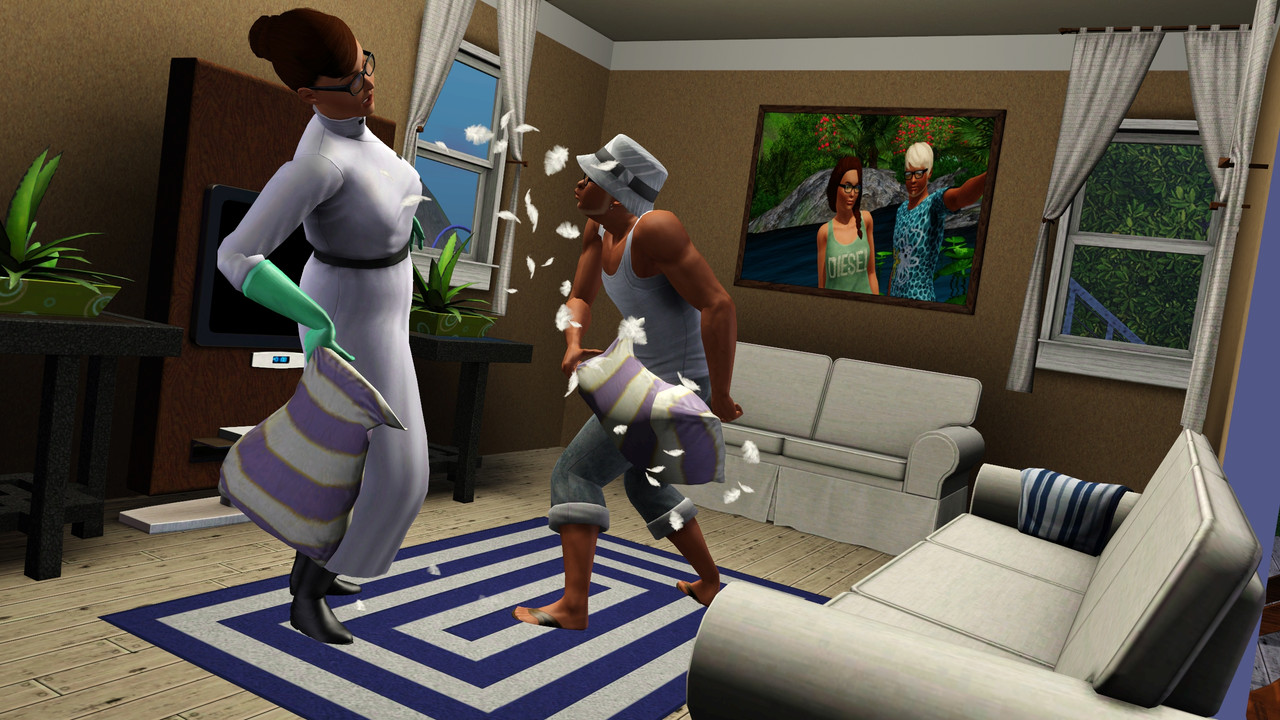 I miss playing TS3 but I really want to organize my store content and then finish setting up my game. In the meantime, I'm having fun playing Dying Light and Minecraft. I still am in a bit of disbelief that I collected so much iron, coal, etc and then died in lava and lost everything because a skeleton attacked me while I was standing on gravel...lovely. And now pillagers keep hanging around and I no longer have any iron armor but I was able to make a shield from the little bit of iron I had stored away.
Because I'm Fragile...but I'm not "that" fragile.
Wojtek
Instructor
DELETED POST
13th Sep 2020 at 4:58 PM