Am I alone in thinking the food looks REALLY bad?
This is a really weird and random question, esp since I uninstalled 4 like a year ago, but something that has always bothered me... Food in previous games, even 1, ranges from looking passable, to looking absolutely hunger inducing... But aside from a small sampling of foods added in Dine Out, almost all the food in 4 looks disgusting... Like something I'd be upset to see served in a school cafeteria level disgusting.. IDK if it's the lighting or what, but whilst everything else about the visuals in this game is the definition of a mixed bag, with some things looking lovely, and some things really not, the food outside that one gamepack consistantly looks unpalatable... Am I alone here?
Advertisement
sayurisan
Test Subject
#2

I've never found the food in any sims game to look hunger inducing, it always looks so so. I haven't noticed 4 being any worse off....
Adorbs_Lil_Puddin

That might be nostalgia goggles combined with younger-you's imagination swooping in. Most of the food looks, well, not-so-yummy. There are some exceptions like the fancy big food items you purchase of objects/get with special requirements.
Naus Allien

I think Sims 2 food looked the best. Sims 4 art style is too low poly and texture are extremely blurry, so food looks fake and ugly. 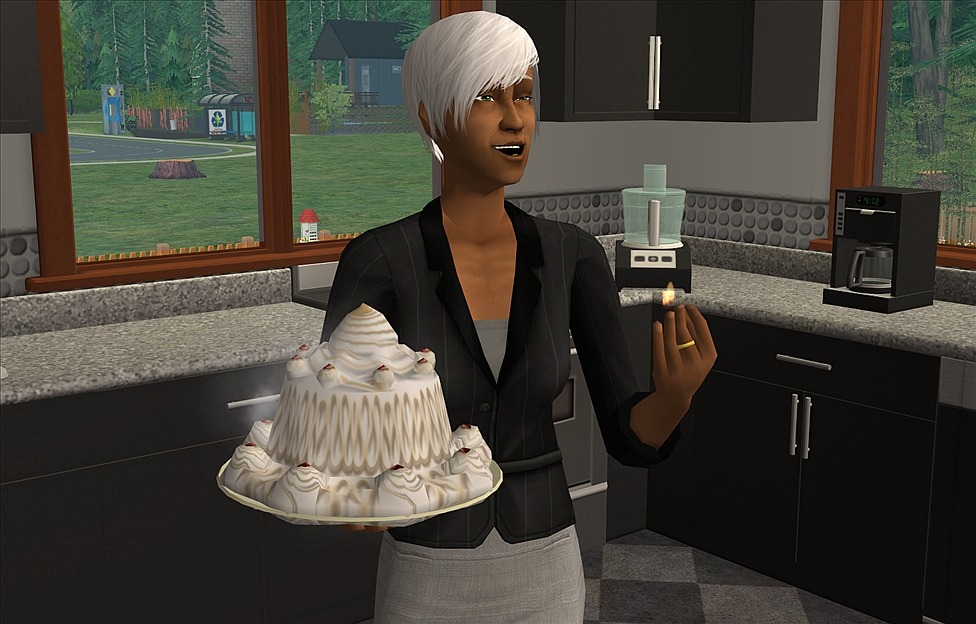 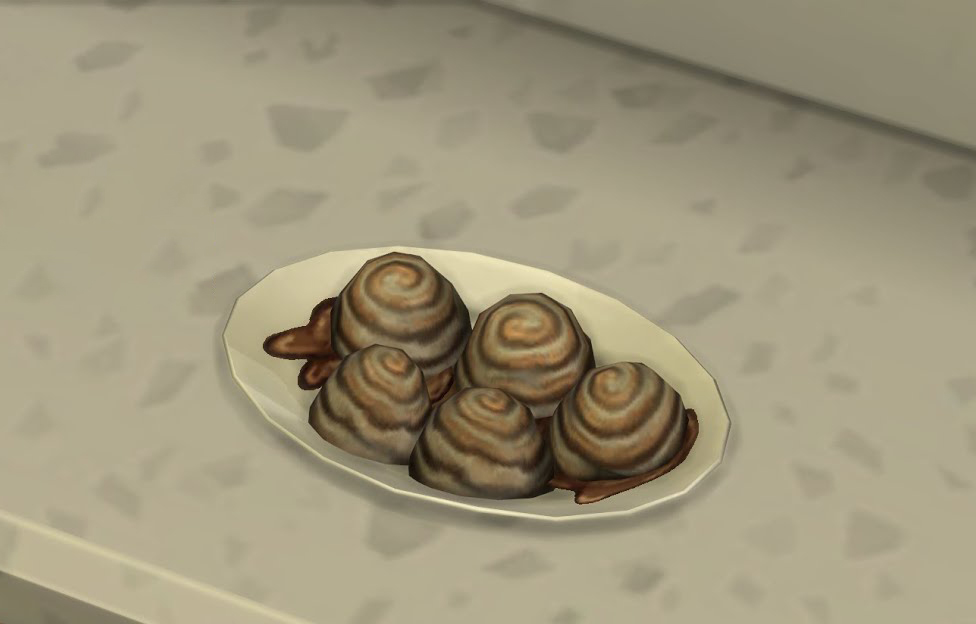 Don't forget the most obvious one, pizza. Looking at TS2's, and then TS4's...

TS4's pizzas look disgusting. It looks like cardboard with mustard slathered on top.
You have been chosen. They will come soon.
Adorbs_Lil_Puddin

Quote:
what the actual fork?

Not nostalgia goggles. I play The Sims 2 regularly, and 3 and 1 occasionally... And haven't played 4 in over a year, and yet the fact the food looks awful in my eyes has stuck with me.. The food in 3 looks pretty meh generally, but it's way more passable than whatever this playdough looking stuff is... At least from a distance. The food in 2 and 1 generally looks straight up delicious, as that one example shows.
DeservedCriticism
Instructor
#9

It's the polygons. It's not an exaggeration that some objects in Sims 4 have like 4 damned polygons, (guess the team missed the memo and thought Sims 4 stood for the maximum amount of polygons allowed) so you end up with things like crows with diamond-shaped bodies.

Then again, it's not just the polygons. Textures too.

Look at Naus' example above. There I assume the Baked Alaska for Sims 4 is supposed to be a round ball, but you can clearly see and count the hard edges. The texture they slapped on is likewise a single texture devoid of depth or shading. Also looks like it was blown up just a liiiiiittle too much, so either the pixel sizes don't get smaller in Sims 4 or they did a bad job gauging the size of the texture vs. the size of the cell.

Sims 2's Baked Alaska suffers a similar problem for the middle-tier (largest part of it) if you look at the texture cause you can notice it's stretched and being angled in a way the texture wasn't designed for. You can also see where it cuts off/repeats as each new cell/surface begins.

That's it though. The rest of Sims 2's Baked Alaska looks clean, so the problem we're left with is essentially the worst quality textures for Sims 2 represent the standard for Sims 4.

Some are ballpit quality: 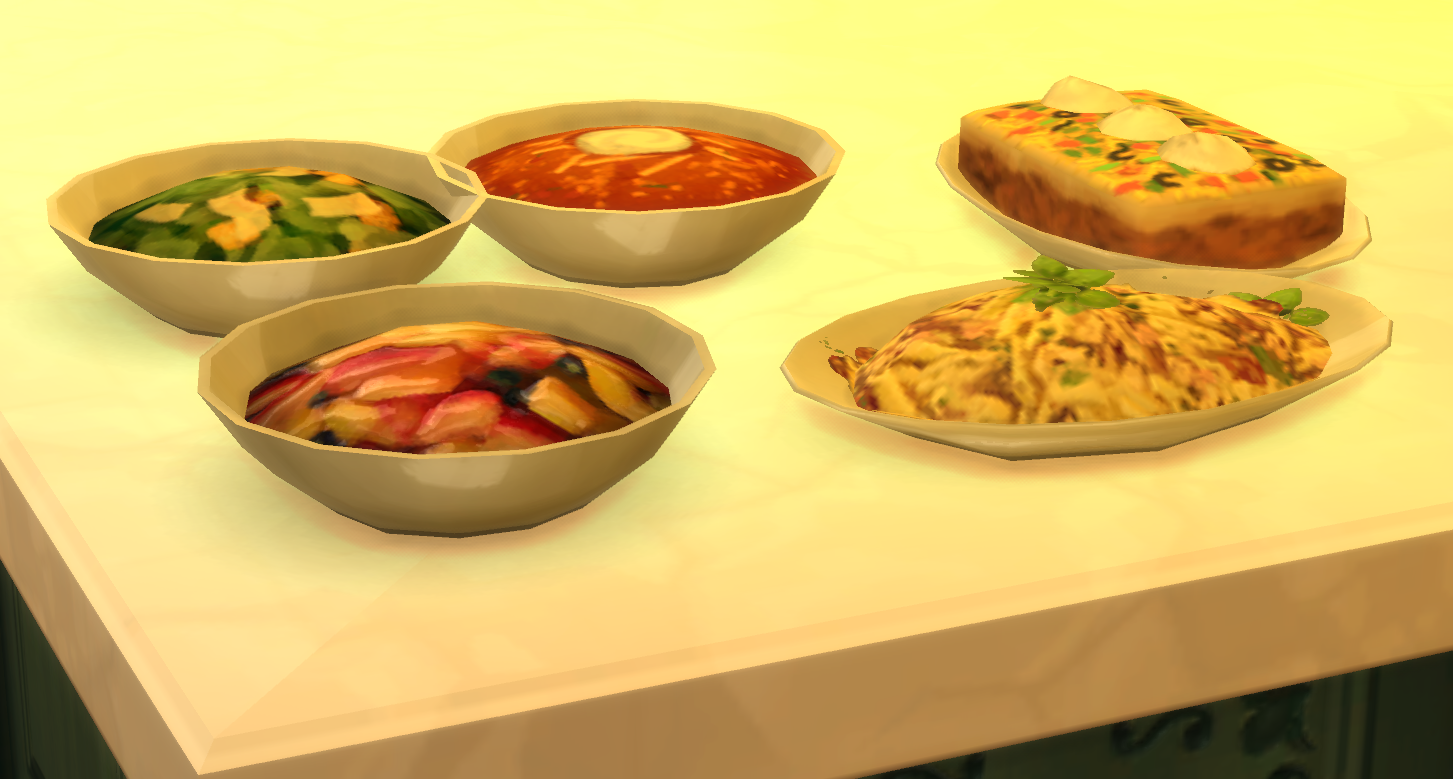 I think the.....lasagna? The thing on the far right is also a good example of the difference: it actually stands out in a positive way in that image because it actually has polygons beyond it's basic shape. The others shown are like the top of a sphere with a texture lazily pasted on. The....whatever it is is a square and OMG HYPE they added three droplet things on top. Again though, compare that to the Sims 2 Baked Alaska above and it's clearly lazy by comparison.

Anyone know of a fancier looking food in Sims 4? I'd be curious to see what's the most advanced they get with actual textures/shapes.
parrot999

I compiled a representation of the evolution of Pizza in The Sims games. And threw in a Sims 2 burg for good measure cuz it looks really tasty (pardon the custom plate.) Since I have no intention of reinstalling 4, I'm linking to a pic of the "Pizza Anytime!" Mod by FTuga197 (Really hope they don't mind) I think this makes my point pretty well though:

The Sims 1 pizza despite being like maybe 40 pixels at best STILL manages to look tasty, esp compared to the one in 4, so I can't purely blame it on polygon and texture limits...
Mrmo
Scholar
#11

But anyway, I would not agree and I would not disagree with OP about the looks of the food. I think it looks decent at least. Not super tasty, but decent. As pointed out, it's the polygons or should I say the lack of them. Yes, the food did look better in the Sims 2 but it was no "light weight" game like the Sims 4.

Off topic: That's a very interesting sim you have there Parrot. The yellow lady I mean...
parrot999

Her name is Idris Infernus and she is a half dragon Sim. The story is her mother, a witch, had an accident that turned her into a dragon during her pregnancy, and Idris was the result. I actually have her mother, Iris, as a character in The Sims 1. But anyways, she is technically a fairy, using the custom lifestate from MidgeTheTree. She's also in the Medical career, for the jokes of Doctors and money and dragons loving gold, etc. She also lives in a pseudo Magic Town remake. I say pseudo because it is a different location, but follows the design cues of Magic Town.
dikosay

Wow.
You play your Sims 2 game (it IS Sims 2, right?) like I'm trying to play my Sims 4 game. Even despite how bad the food looks. I try to overlook the ignorantly-conceived things of the game like that.
Loyalty to petrified opinion never yet broke a chain or freed a human soul. - Mark Twain
matrix54

That's probably why TS4 pushes food so much - it's incredibly easy to make. It's 5 polygons and a 256x texture.

For example, the bowls of food. It's a bowl with a SINGLE texture on them. Give someone a hour, they can make a few bowl dishes.
->> Check Out Checkout: Journey To Employee Of The Month! <<-

~ Just a click a day is nothing short of helpful! ~
Lodakai
Forum Resident

What do you expect when you use bugs to make Kabobs?
When an engineer says that something can't be done, it's a code phrase that means it's not fun to do.
parrot999

Quote:
Yes, it is The Sims 2. It's my primary Sims game. It respects me as a player, has heart and soul put into every object and animation, and has an actual simulation in the background which actually makes the sims feel like people living an actual life... So even if it's rough around the edges thanks to it's age, and a pain to run on modern hardware, it truly is the best option for story telling. Also, the fact I can make a functioning economy using OFB, puts the game over the top!

Mind you, I already showed a Sims 2 burg in a previous post, soooo... this really speaks for itself...

I was also laughing with a friend about some of the designs, like this "spinach wrapped burrito" that looks like hand soap:

These pancakes which look like in his words "baked pineapple slices":

This cheesecake that looks like a red giant star:

This kebab that looks like wooden planks on a stick:

And these ensaïmadas which actually broke me, because they look literally NOTHING like ensaïmadas in ANY way! To the point the "baked alaska" looks more like them:

I also noticed "Discover University" added 3 pizzas that all use the same texture, which coincidentally looks nothing like any of the three new options...
Hamishmc
Instructor
#17

I suppose it depends on what resolution you are using. I never take any notice of what food looks like in the game. My difficulty, (though decreasing) is getting my Sims to come and grab it or to get served with it!
Mrmo
Scholar
#18

Not related to thread... well, kind of. I just could not help to share this...

I only know of two food texture overhauls. The first, by yakfarm is the best, and used to be hosted on MTS. Yakfarm's Food Texture Overhaul can still be found here: https://blog.naver.com/PostView.nhn...No=221818786167

This page shows some of the older before and after pictures: https://sims4downloads.net/mod-the-...aul-by-yakfarm/
I think yakfarm's only covers some of the food, though. I don't believe it's been updated in a long time. Still, the burgers in this overhaul look absolutely mouthwatering in-game.

The other texture overhaul is A.I. Upscaled Food, which is located on MTS: https://modthesims.info/d/650008/
It makes TS4's food look a bit more crisp, but it's got nothing on yakfarm's endeavor. Did I mention how delicious the burgers in yakfarm's overhaul look?

A fool and his money are soon parted. ~ Thomas Tusser
parrot999

Looks like I timed this thread well. lol
yaohui

Today I updating and let my sim cooking.
Fish yakisoba is awful! It looks like a tuft of wool with a bad texture. 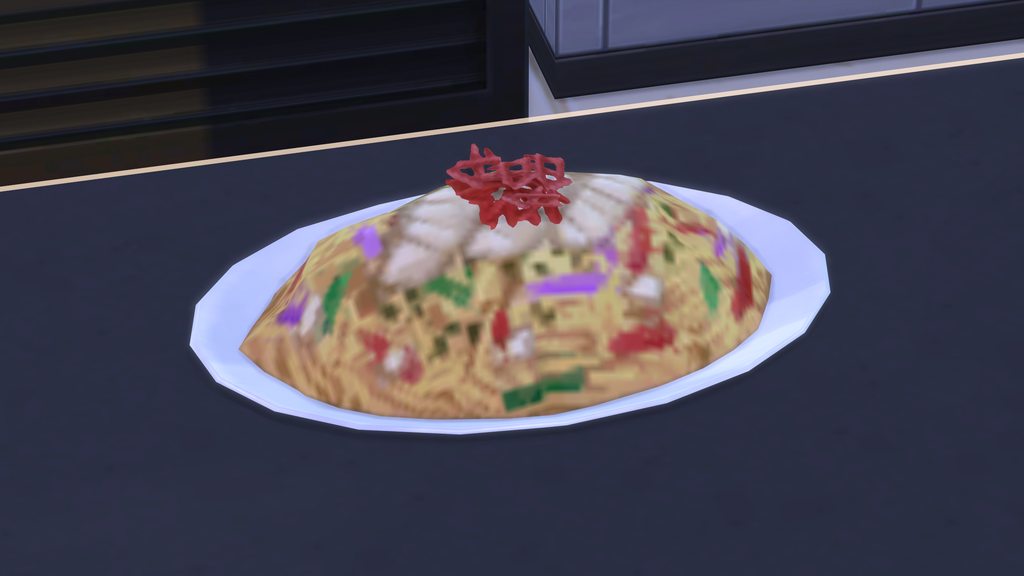 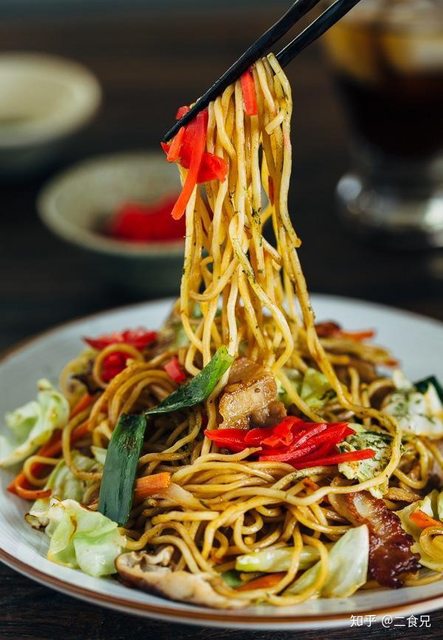 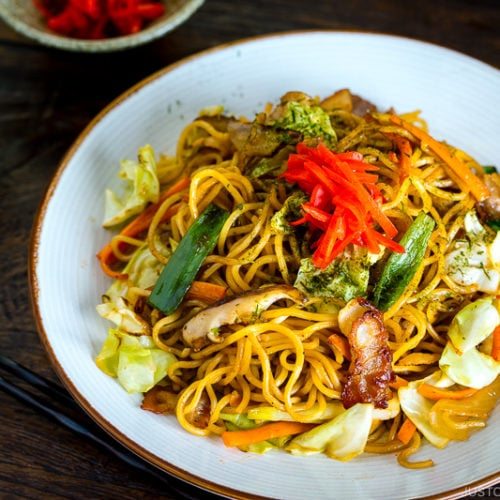 That no joke looks like a pile of vomit on a plate. It's even got the 3-4 different colors mixed together from what you just ate.

You have been chosen. They will come soon.
simsample The food still looks mouth-watering to me, even though I agree that the image quality or polygons or whatever is inferior to previous iterations. I think I'm just easily pleased when it comes to visual representations of food--even if it's nothing I would try in real life.

It's not just you - .the TS4 food looks pretty awful. So much of it looks like mush. The garden vegetable salad in particular looks incredibly unappetizing...
Lurking since 10/2/07 ~ Call me Cheezy. ;)
Tumblr: http://mmmcheezy.tumblr.com/
Back to top