Quick Reply Print version
Search this Thread
Replies: 2122 (Who?), Viewed: 209223 times. | You are currently not a member of this group. Would you like to join it now?
Page 7 of 85
Ferguson Avenue

Hmm I automaticly got the new theme, I have to get used to it, holy shit..

Anyway I'm working an a mansion, which his currently a very raw WIP. It's only the main shape and roofing, but I wanted to show it so you guys can see where it's going 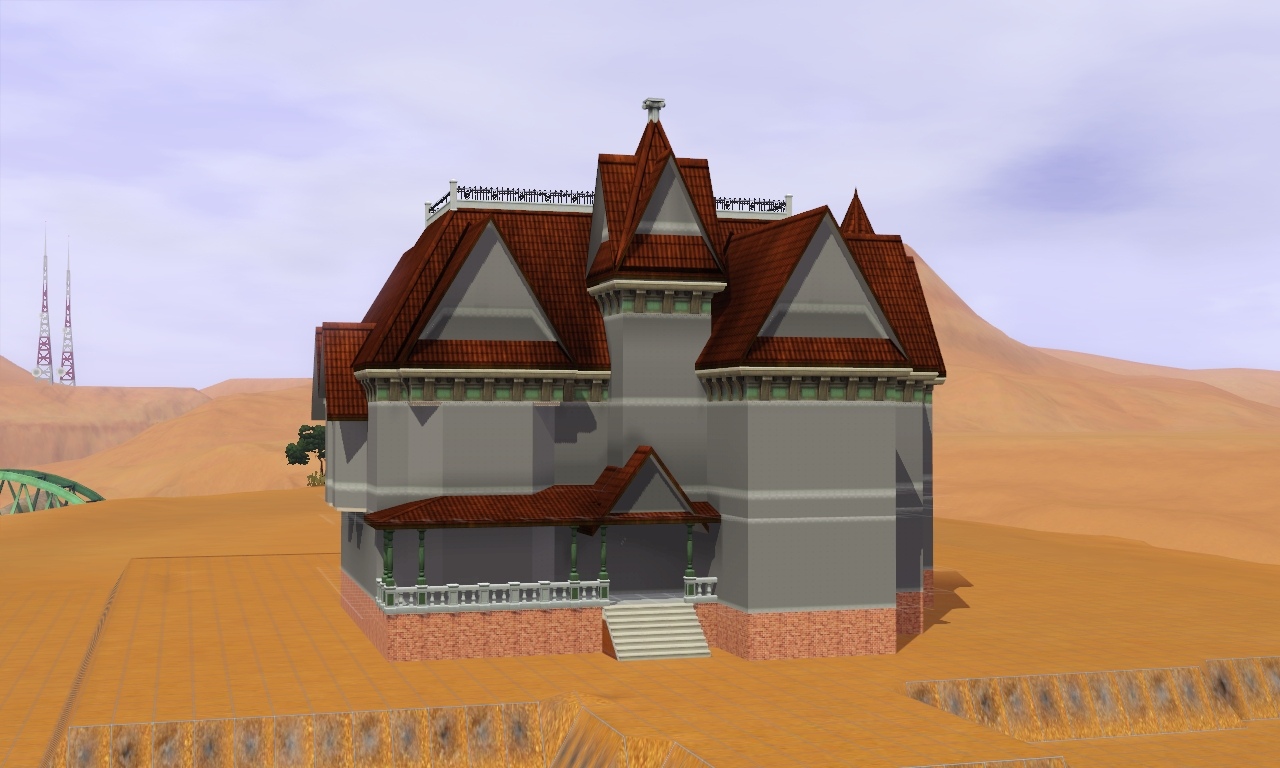 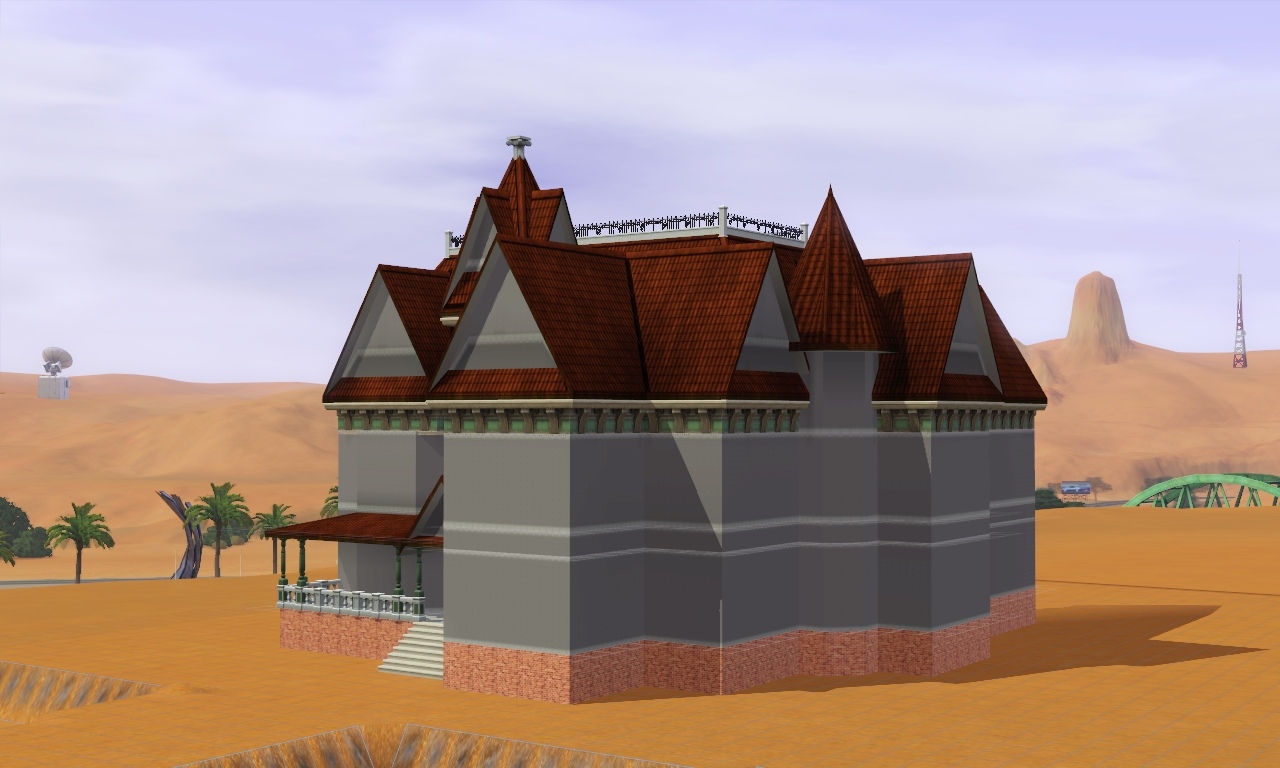 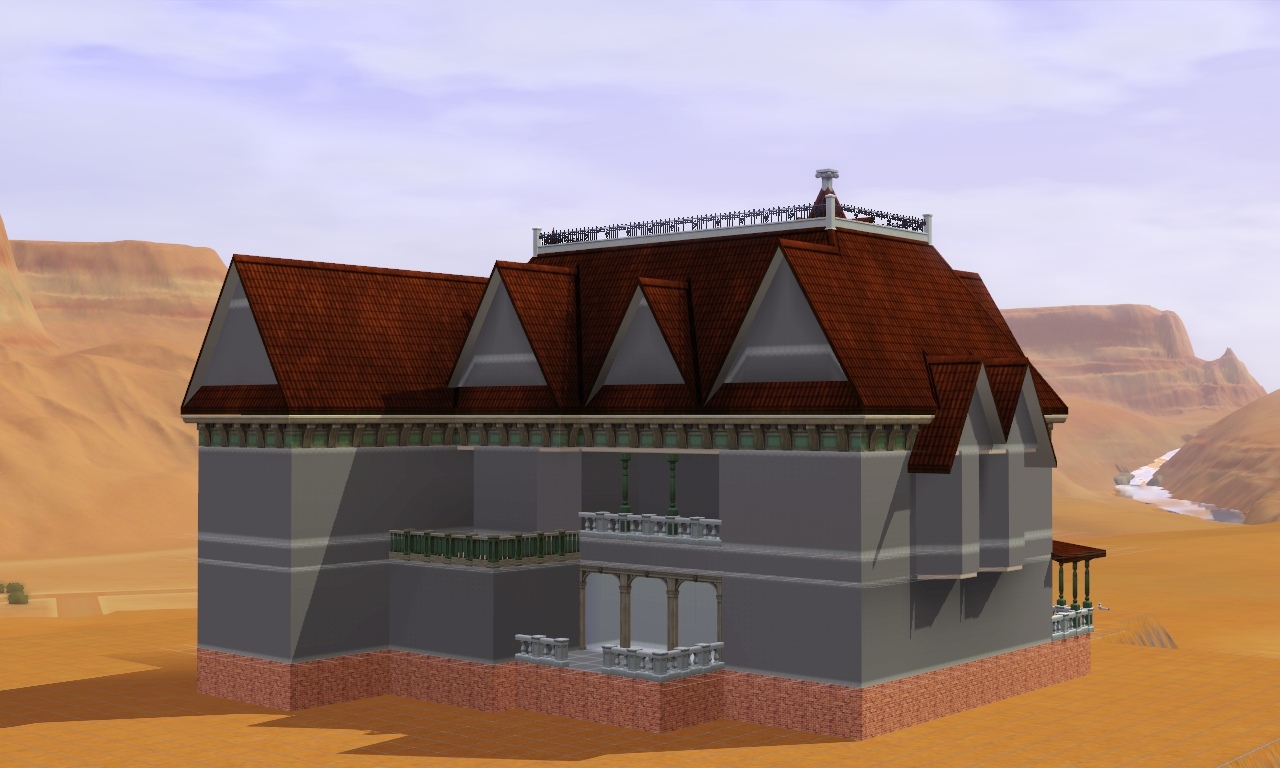 There's some very tricky CFE on the upper story (Especially the tower!) of the house because of the level limit. I also noticed that they fixed Vick's Victorian cornices and now placeable against walls without glitching and bugging

WOW! I really love the shape of the mansion! It is very Victorian might I add! I love how you raised the terrain to make the house more imposing!
What size lot are you building on?
C.T.HOLKO88
Johnny_Bravo

It's 64x64. I plan on making a big garden with a pool and a garage at the back/side of the lot

The'res a lot of space in the roof, but because of the CFE, I sadly wasn't able to make more rooms so now it's one huge recreation/hobby room with a ceiling which is slanted and almost 2 floors high!
If you remember me, I'm awesome!
__________
Need help building? We'll help.
Ferguson Avenue

I don't always start building houses I see in my dreams, but when I do, I don't finish them very quickly... 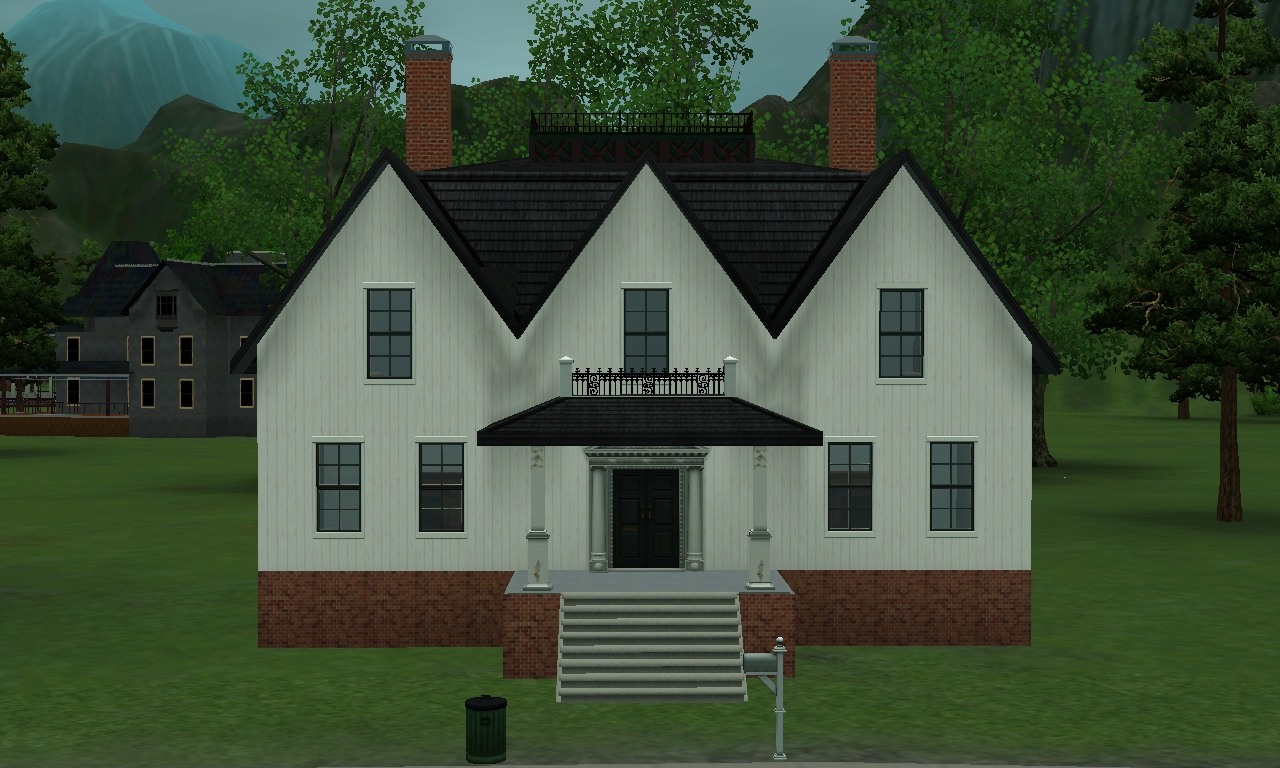 I hope to finish this one. I think I was inspired by a house I saw online, but it was in my dreams, so I want to build it. It could take me a while...

64 by 64?! you'll have alot of "fun" trying to furnish such a large place. I struggle with 40 by 40, let alone 64 by 64. It does look really good so far, and its proportions seem very realistic. Any chance you'll upload it when finished?

Fergus your house looks really nice so far. It's very different from your usual houses

I ran into this because of the CFE'ing and it seems like it can't be fixed! Fuck! 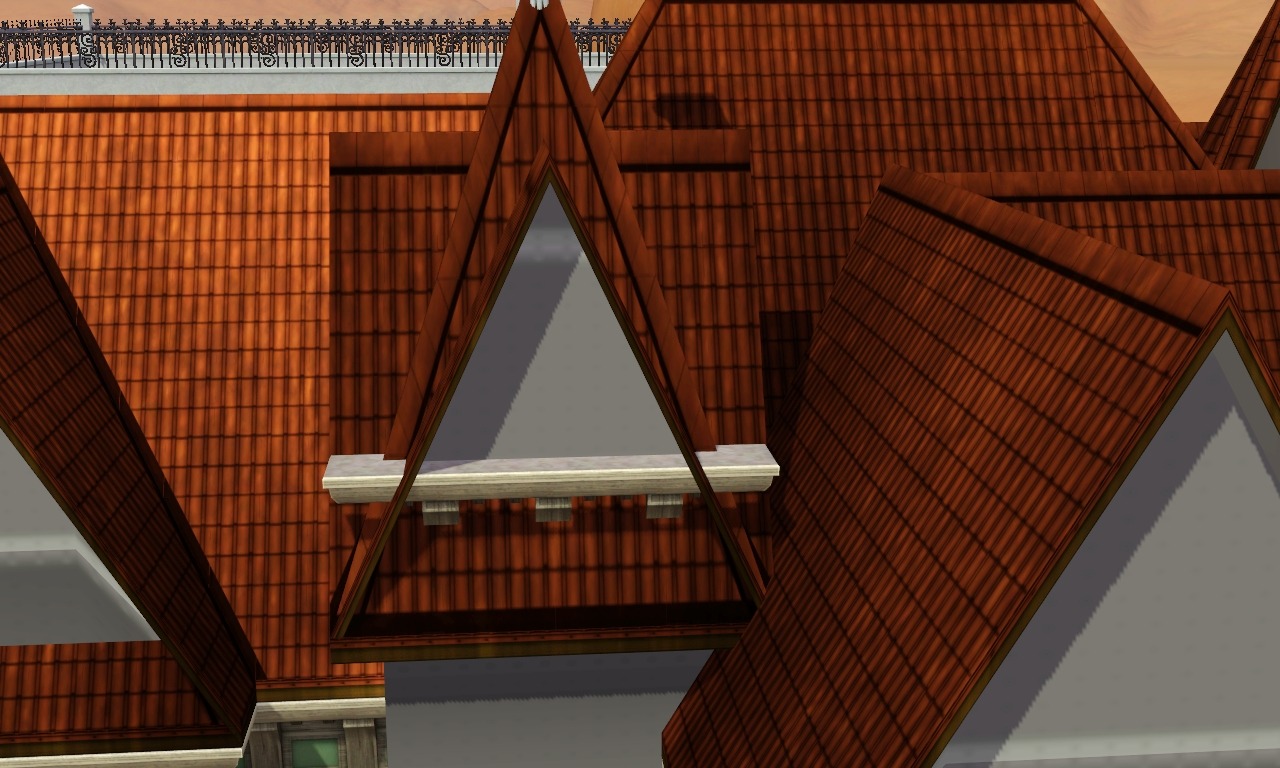 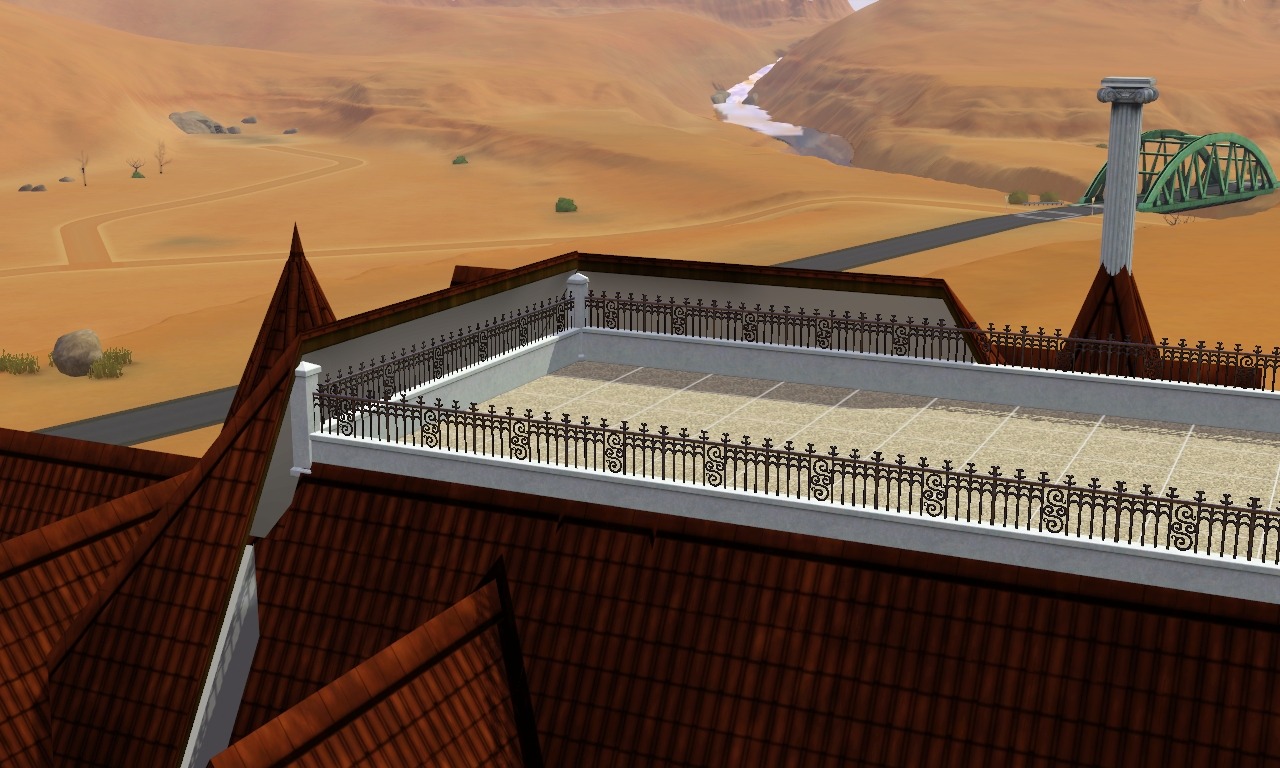 It didn't happen the first time I 'reloaded' the house, I've never been so upset about something like this. I was so excited about working on it

I think I found the house that must have inspired the one in my dream: 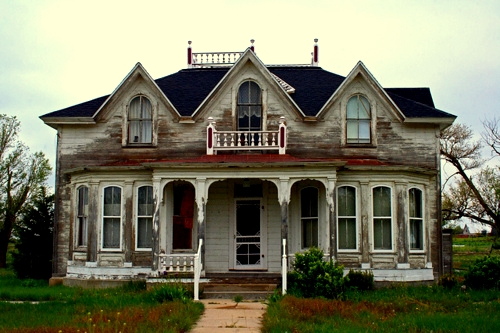 In my dreams it was in the middle of a desert/the wild west, and the song 'Summertime Sadness' by Lana Del Rey was going round in my mind.

Also, Johnny Bravo, I used to get that trouble a lot, if you would like, I could see if I can fix it for you so that the roofs stay where they are supposed to?
It would be fiddly, but from what I can see, it should be possible.

Fergus you're my angel

I'll get the file up here ASAP

Edit:
Here ya go. The other guys can download it too if they feel like tweaking it. I just take it down again as soon as Fergus has it. Deleted.
If you remember me, I'm awesome!
__________
Need help building? We'll help.
Ferguson Avenue

Got it! I can't promise anything, especially with the cornices, but I'll certainly give it a shot. I wont let EA's constraints take me down without a fight

You can remove the cornices as you wish. I can add them later. I'm happy when I get it back with a functional roof, and I hope it stays like it. I'm wondering why it happened as CFE normally doesn't mess up. Could it be due to leaving CFE on false when leaving?
If you remember me, I'm awesome!
__________
Need help building? We'll help.
Ferguson Avenue

It's not due to leaving CFE on false when leaving, it's because the roofs require you to leave a proportion of the wall heights they cover at the same height that the roof has as its base. I've managed to fix the roof! But it came at the cost of one of the attic rooms which I have removed the door to so that you know not to try and raise the height of any of the walls in that room. 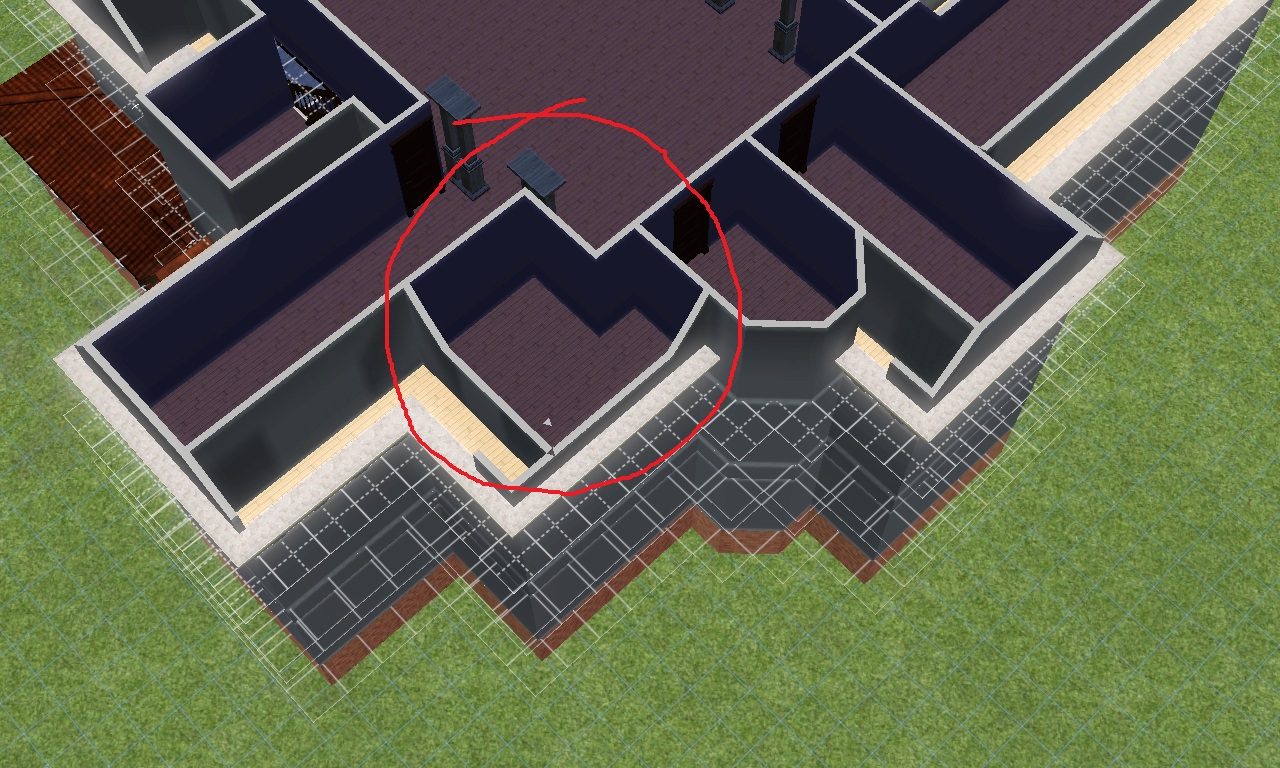 This means that there now some awkward warping: 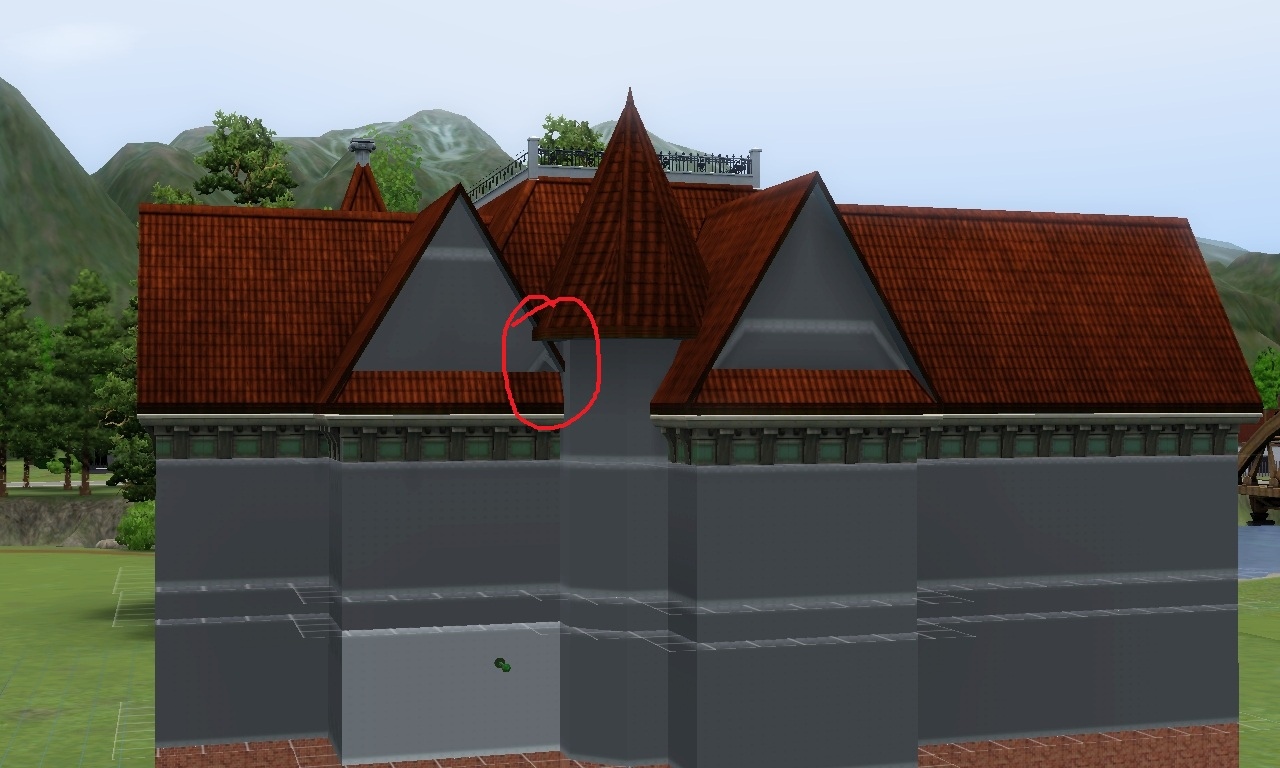 I did manage to add access to one of the dormers, just in case you wanted to use it: 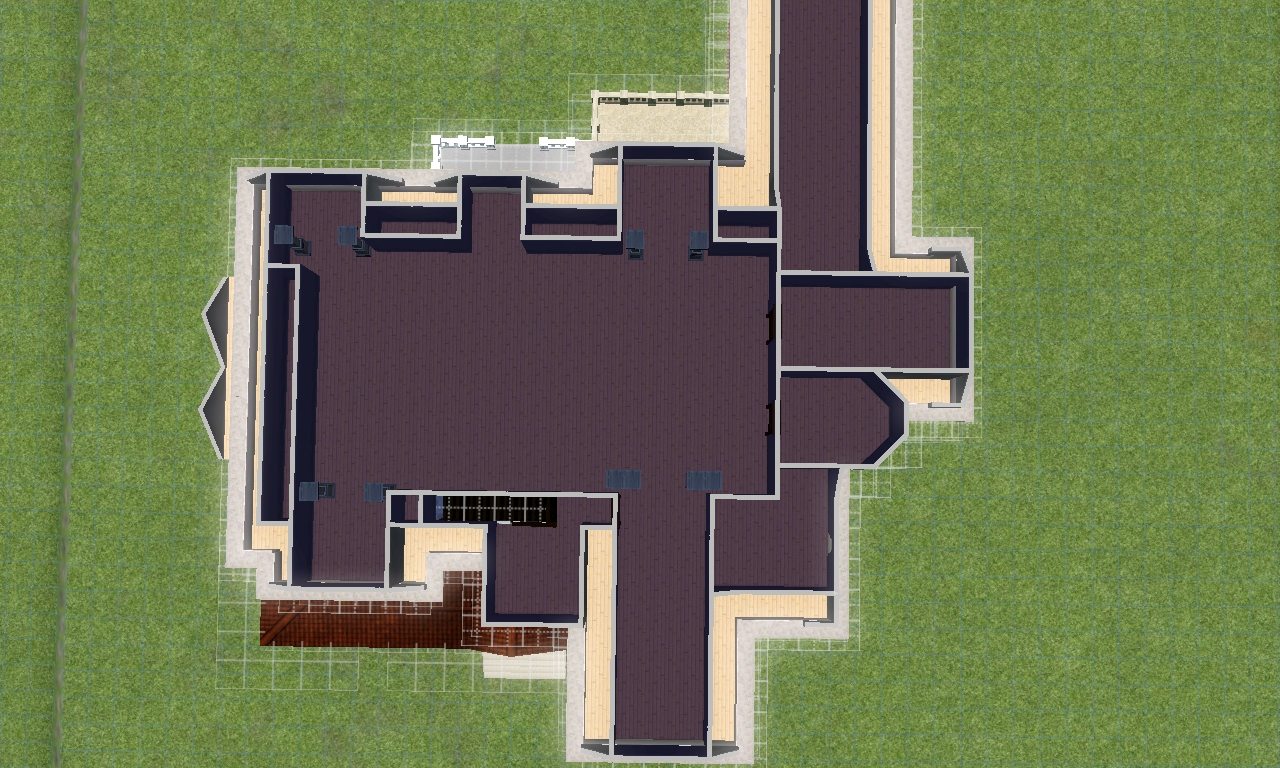 But I highly advise against making anymore structural changes to the attic using CFE false.
I've left the cornices where they were.
May I make a couple of suggestions for the rest of the house?
gogolinopz

Hey, it is nice to see that you have been keeping the thread going. I really like all the buldings you have posted, I am working on some stuff also, but I am not quite ready yet. I am participating in the Groundwork Foundation challenge now and I was also going here and there the whole month. If you would like you can see my entries:

Dang! You guys must have a lot of free time huh? Everything looks good!
C.T.HOLKO88
Johnny_Bravo

Good luck with the challenge, gogo.
tudor I, indeed have a lot of freetime, appears like fergus has, too, or is just machine fast

Thank you for fixing the roof, I'm wondering about the tower whether it's possible to have the roof how it was first without it sinking down again. But I think I know something to keep the roof from sinking

What were your suggestions?
If you remember me, I'm awesome!
__________
Need help building? We'll help.
Ferguson Avenue

But seriously I spend more time thinkning about playing Sims than I actually do playing Sims. In the few hours a week that I do play, I work fast or spend the time checking up on the families I like to play.

The roof on the tower will always sink back down if the level is reduced, to check whether a roof is going to sink, simply delete it and undo, then it will reappear either in the same place or appear having sunk into a new position; that way you know what you've got to fix. I'll give the tower another attempt when I next get chance, and let you know whether I am successful.

As for suggestions, you had a lot of open space on the first floor landing and not many bedrooms, I'd suggest adding more bedrooms to this floor and bring the amount of open space back into proportion with the number of bedrooms it has. Have you considered adding servants' quarters? I would have suggested putting them in the attic, but that would not be possible with the ballroom being up there, so maybe add them to the rear wing or in an outbuilding. A house as grand as that would have had servants' quarters for lots of servants. 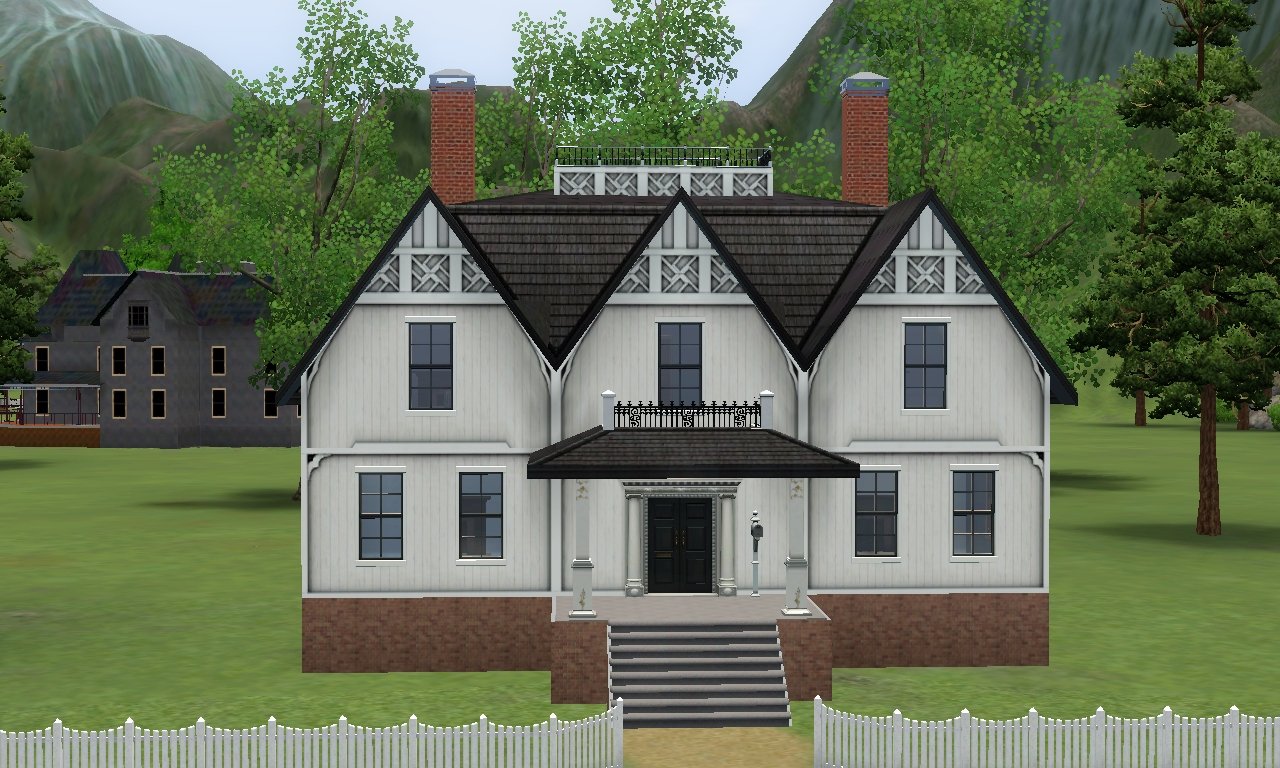 I'm not too sure about the foundations, but other than that, it shall be a nice home.

I managed to track down the location of the inspiration house, turns out it's in a small town in Kansas; where all the roads are dirt roads and it is very rural in general.
TudorMan23

Fergus, Your Gothic Victorian is looking good! How about adding bay windows on either side of the front door? And I like the raised foundation; it looks grander!
C.T.HOLKO88
Johnny_Bravo

While I'm still thinking of a solution for the tower, I made this little housey. 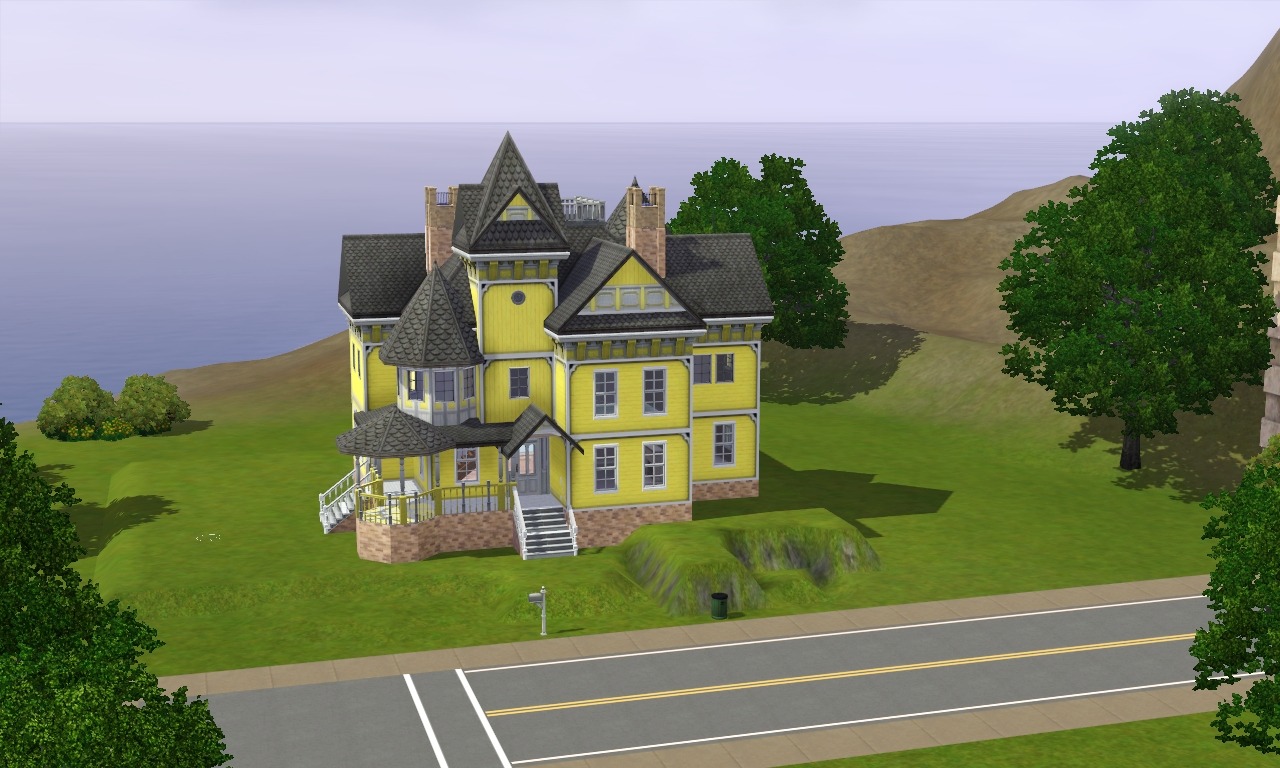 I like the little housey, it looks very cozy and upscale. But I personally would choose a different color. I would love to see it finished!

By the way can I ask you guys to check out my journal and comment if you have the interest. I am thinking of posting some thoughts about the sims over there or ideas for future projects. Just check it out and leave a comment if you like it. 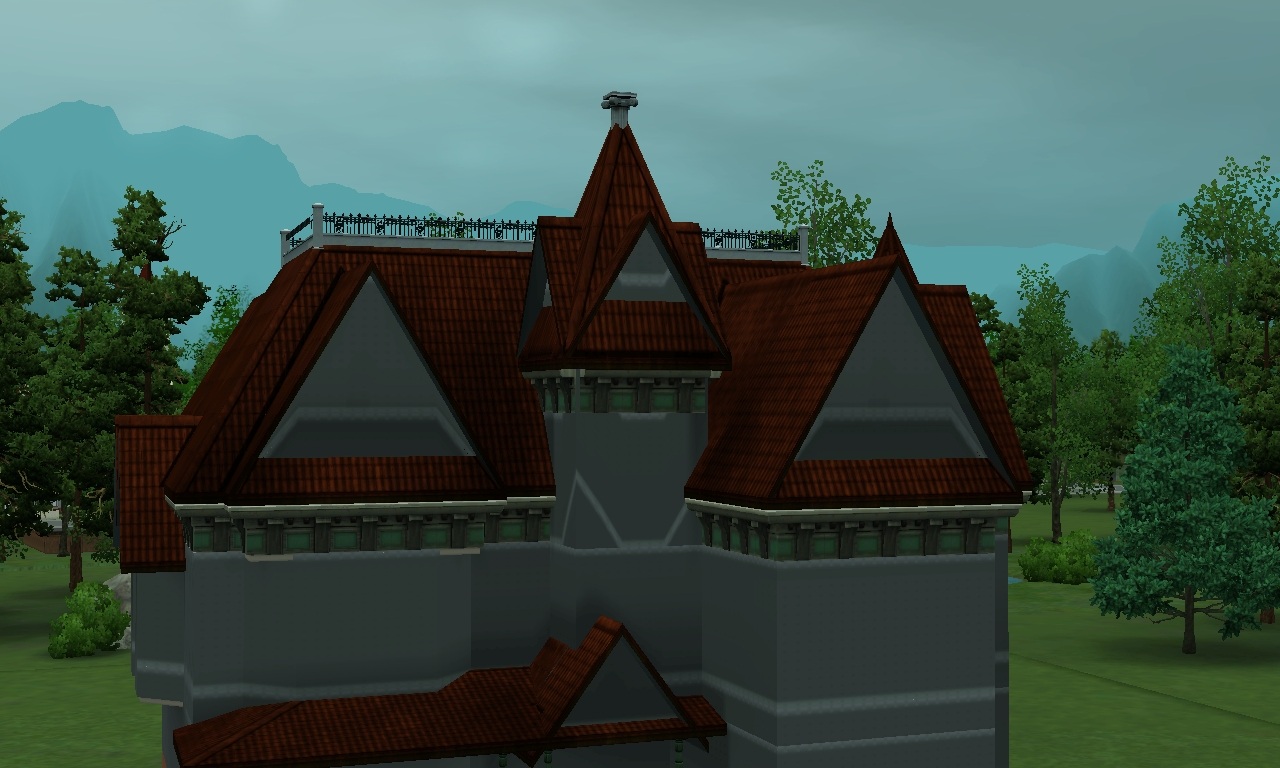 I've come to a reasonably successful conclusion with the cornices although it has involved leaving some oddly warped walls and you cannot use the corner cornices as they move up to the height of the roof. 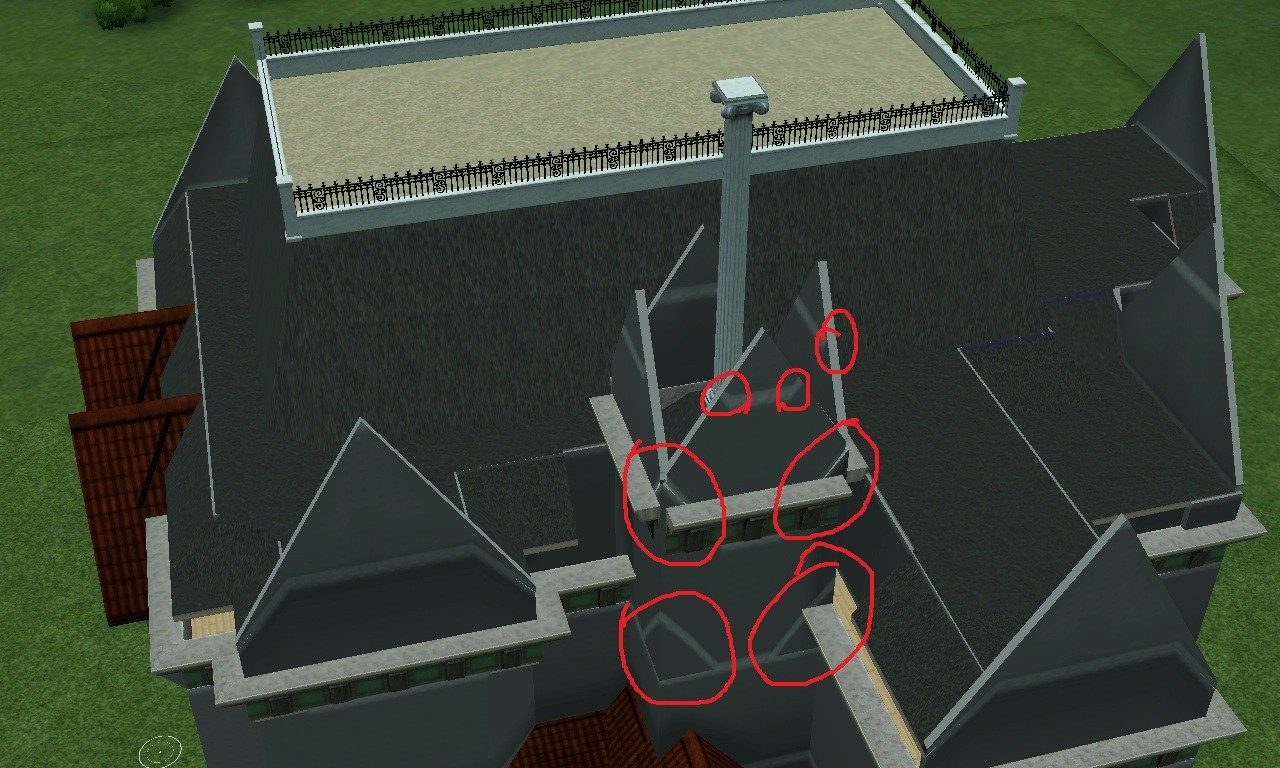 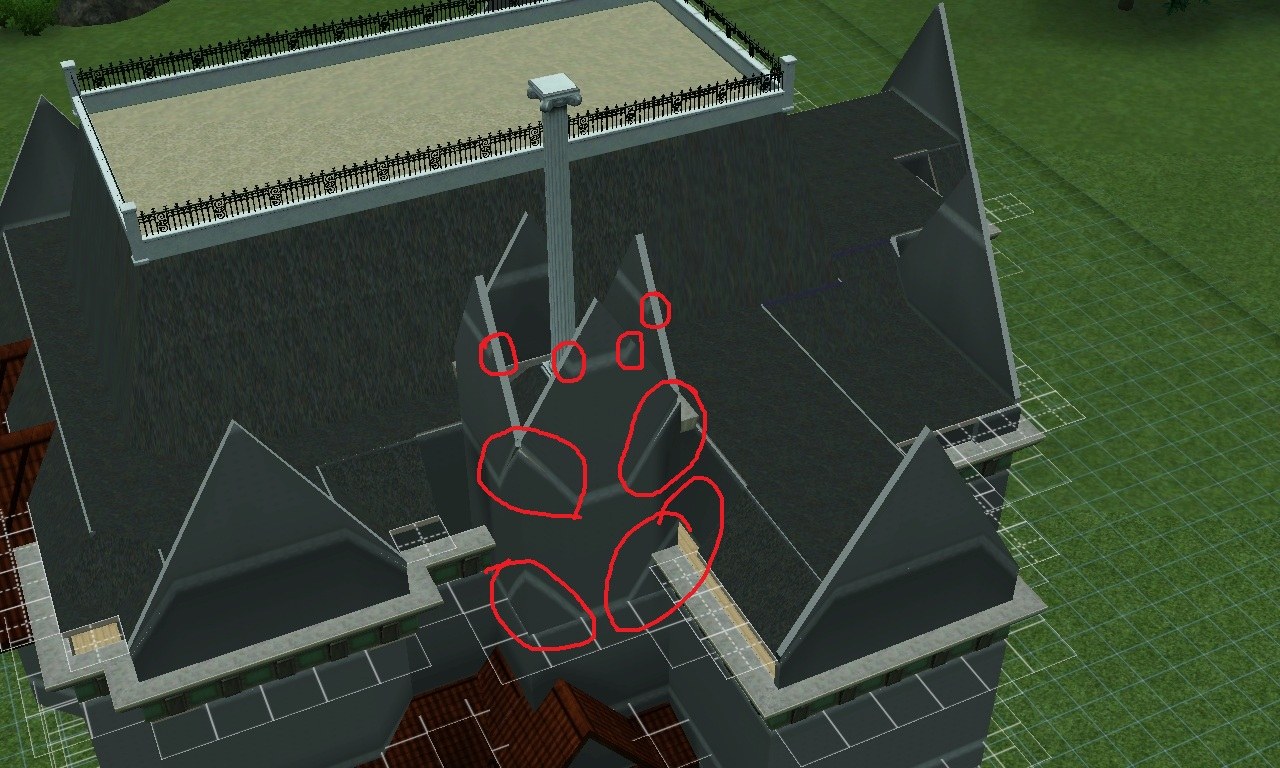 I hope these flaws will be acceptible, You can cover up the warping with vertically orientated wall covering.
As for my suggestions, the upper floor is very open, a little too open, there needs to be more bedrooms. Especially a servant's bedrooms, a house of this calibre woulf have had atleast a few servants, maybe even in their own house/cottage in the garden. In case you weren't already planning on doing so already, I'd suggest adding a carriage house in the garden too.
Would it be okay if I were to keep a copy in my game so that I can have a go at finishing it? Or would you rather I removed it from my game too?

P.S. Also, yellow could be a good colour for the exterior of your other house, it's just a case of getting the tone right, like so:
http://wisteria-lane-house.e-monsit...pg?fx=r_550_550
gogolinopz

Yay, Mary Alice Young's house! I tried to do Bree van de Kamp's house once but it didn't turn out well. But this house inspires me to maybe try again!
Johnny_Bravo

You can keep the house in your game, my angel

As for the yellow of my other house, I've looked up some yellow colors but I didn't think of softer ones. I should think harder next time

Quote:
I could give a whole lecture on that house/film set, but instead I'll just share these links:
http://www.thestudiotour.com/ush/ba...onialstreet.php
http://www.thestudiotour.com/ush/ba...eet_history.php
http://www.retroweb.com/universal_l..._to_beaver.html
http://www.youtube.com/watch?v=V_httLnCZ-k
I once made a really good replica of the home in the Sims 2, but I've had to uninstall the game since then. I may make another attempt at it in sims 3, but that staircase was a nightmare. It was funny seeing EA's attempt at the house in Twinbrook. I recognised it instantly.
Johnny_Bravo

Oh guys btw, I really reccommend armiels new wood textures. They're really good and realistic looking. They fit very good on Victorians or historic houses. I haven't tested it on contemporary houses yet but I'd still reccommend getting it

Quote:
I've overseen this, oops.
Ehhm pfff. I don't know. You can name it what you want, as long I'm mentioned when you sumbit it somewhere