i tried to remake one of my old sims 2 sims.. looks nothing like him because i dont have the right CC yet, but nonetheless i think he's a cutie Erik aged to adulthood and he is so square faced! He makes me think of Superman. :P

Unfortunately My video card (the only part of my PC that does not meet the suggested requirements) doesn't allow me to play with high settings, so I post mostly pictures from the cas (that keeps graphic with high settings even when in the game, settings are low)

Olav (he's a Norwegian pro-wrestler)
Is one of the characters of a story I'm writing, and I create him in every game with a character editor.
He should look rougher, but the sims always had a soft-like graphic, so...

I think here he looks close the way he looks in Saints Row 2.
Che il sultano mantenga le tradizioni nella propria terra, ma non tenti di imporle ad altri regnanti.
That the sultan may keep his tradition in his own land, but not attempt to force them on other rulers.
(Vlad Țepeș)
Rock Chick

Here's some of mine so far, mainly Sims 3 favourites that I tried to redo
Dane

My You Tube Channel
Vattenlilja

Maybe it's just 'cause I'm a mom now, but I've found that in TS4 I just love watching daddys interacting with their babies and kids. It's the most precious thing! <3 Here's Hugo with his daughter Meia.

I think making sims is one of my new favourite things to do in TS4. May I present Kurtis Pickett, the founder of one of my Legacy challenges.

Loving all the guys in here

With his bestie Felix Nadir

Every Townie is an expert...

The sim I made of my boyfriend, with this married chick awkwardly creeping on him.

This is the first sim I've made and played with, I've had him going exactly a month now!
He's romantic, cheerful, creative, and currently trying to find his soulmate. This is Nolan, the neighborhood bro. He's also active and self-assured.
He's always at the gym mentoring the other sims, or at home raising his promiscuous teen brother. Here's Christian, a friend to the world and gym rat.
He's part of my largest and most wealthy family. ...and this is his older brother Dominic, who was a product of genetics from Maxis (based on Christian) but I think he was attractive enough to keep.
He wants to build a successful career as a secret agent and is a bit of a loner. I have tons of male sims (especially compared to female) so I'll post more later.

Meet Jason, a self sim that I aged down to child for a new family. My 6-year-old daughter help me make him because I can't see myself very well. He looks different than the adult now. But I still love him all the same. 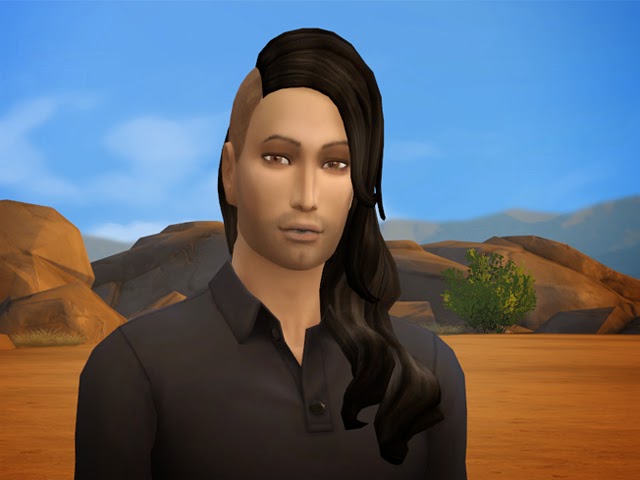 These threads hardly get any love, does no one like the Sims 4? My favorite male sim. Modeled after the Aaron Pittman character (Zak Orth) from Revolution. I wasn't a huge fan of the show, but I am a huge fan of portly bearded computer nerds.

Duke Crocker (Eric Balfour on "Haven")
This is Duke Crocker, from Haven as played by Eric Balfour. He lives in a condo next door to Alicia Keys, by the way. They are both creatives, as well.

Okay, in my current family I got twin boys! The family consists of two couples living together and their children. The red skinned guy is Stephen Hades (father of the twins), the twins are Max and Charlie Hades, and the redhead is Rune Melmont (has a daughter in game) Rune Melmont got super beefy by accident when I wasn't playing his family, he is also a born in game sim
Back to top