Skip and Brandi are so cute, they crack me up. Here's their first kiss and some random pictures of them cheesing together. They're teens right now and the plan is to have them get married and pregnant right after high school. The next couple is Ruby Broke and Michael Bachelor. He just proposed during a long weekend in Granite Falls, and they ran off to the courthouse the moment they were back in town and got married. The selfie was taken right after. I'm shooting for a kind of early 90s feel without going over the top. Skip's hair cracks me up, it's the perfect mushroom cut we all loved back then.
The Mayflies Legacy- a Random Legacy Story
Rookieblue

Here's one of my most beloved Sim couples, Tiki (brown hair) and Lara (black dreads). They are really cute together, at least in my opinion.

The pictures are kinda big, I think, that's why I put them in a spoiler. 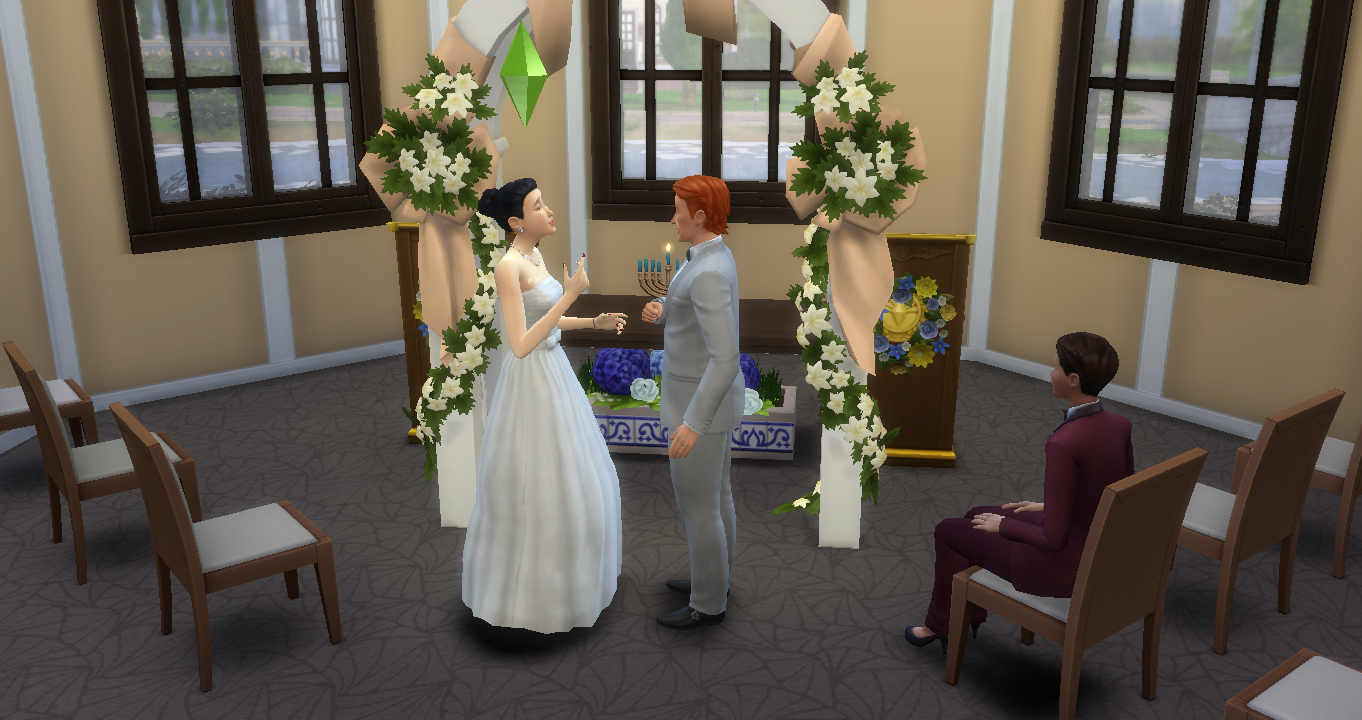 The community gathered at Temple Beth Shalom to celebrate the marriage of Daniel Pleasant and Mary Sue Oldie, on Saturday. 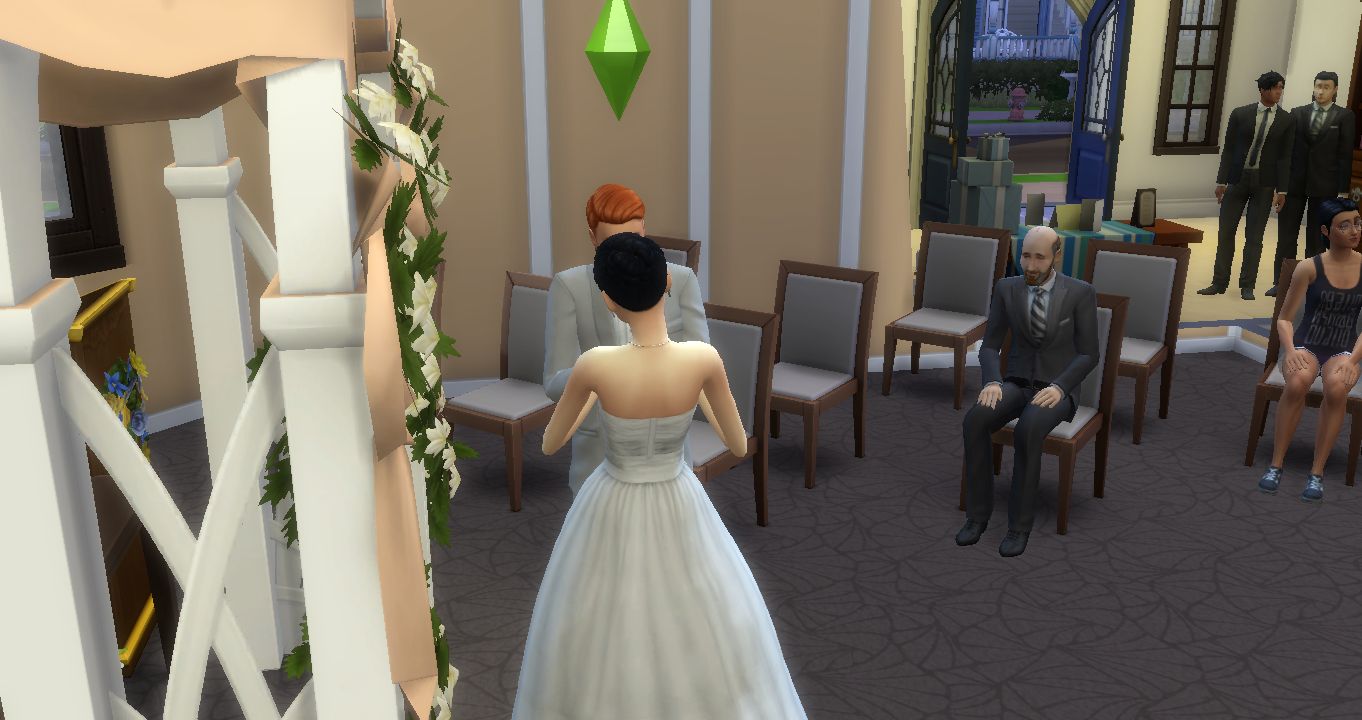 Herb Oldie was very touched by the vows and was close to weeping the entire time. 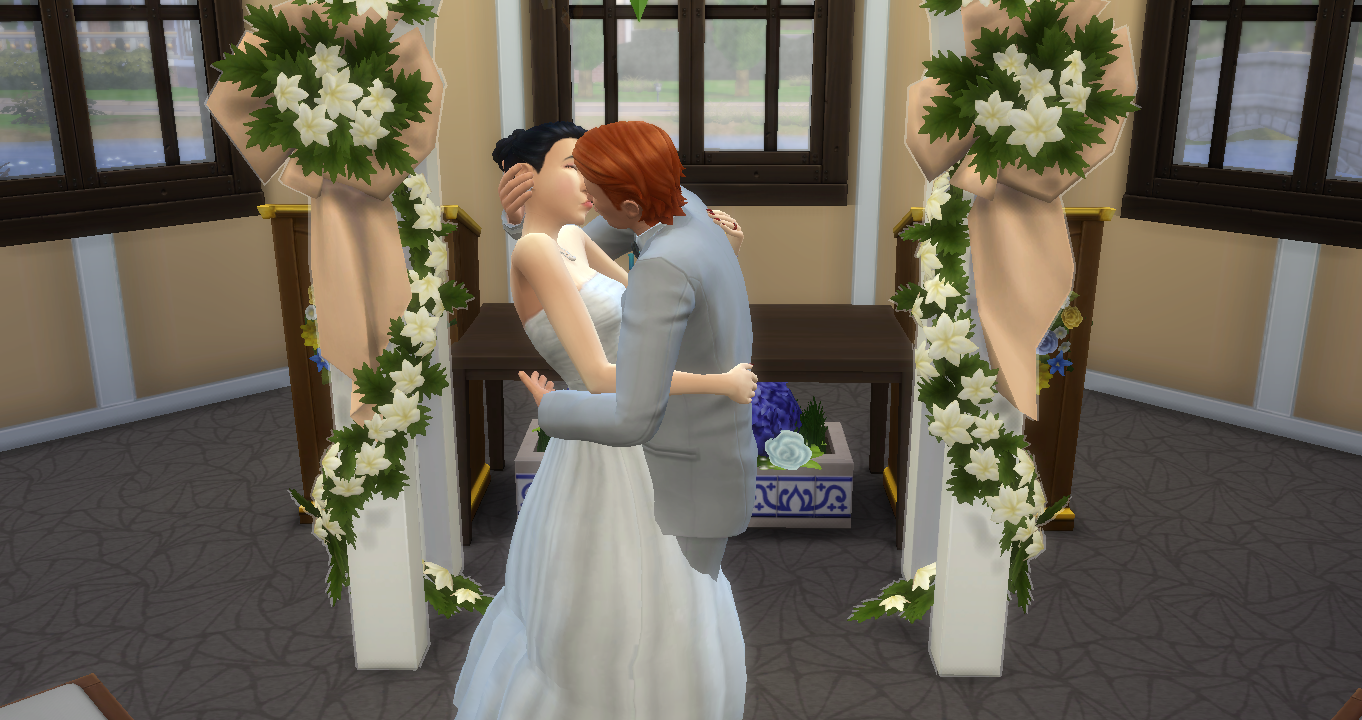 You may now kiss the bride! 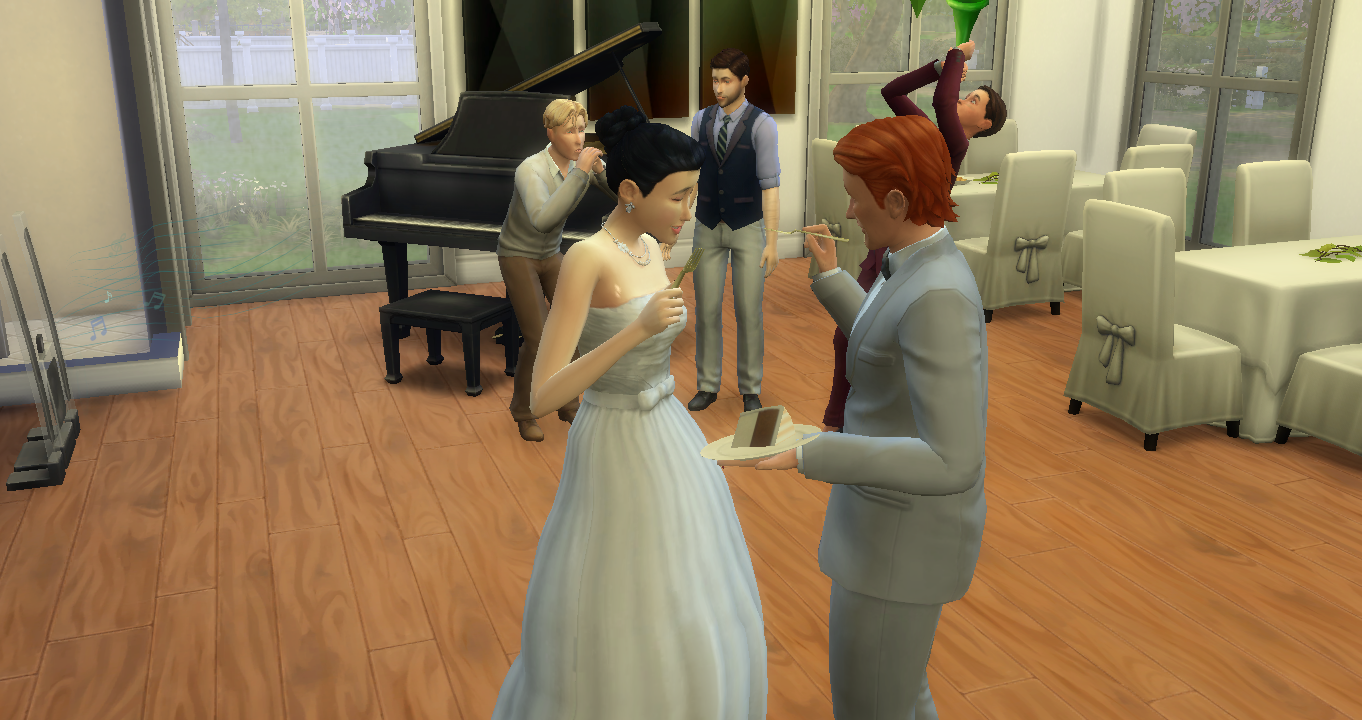 In sim culture, sharing the first piece of cake symbolizes the partners' promise to love and care for each other. 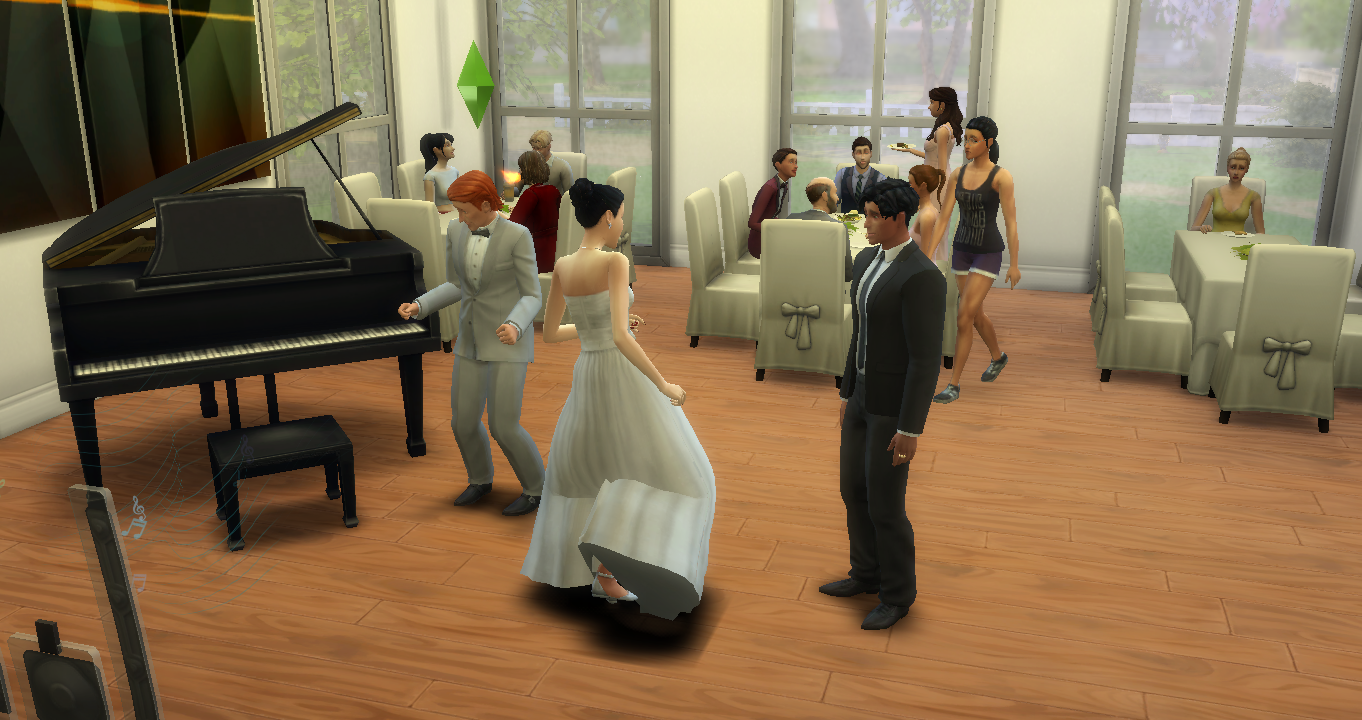 They enjoyed dancing with their guests, about a third of which were in athletic wear for unknown reasons 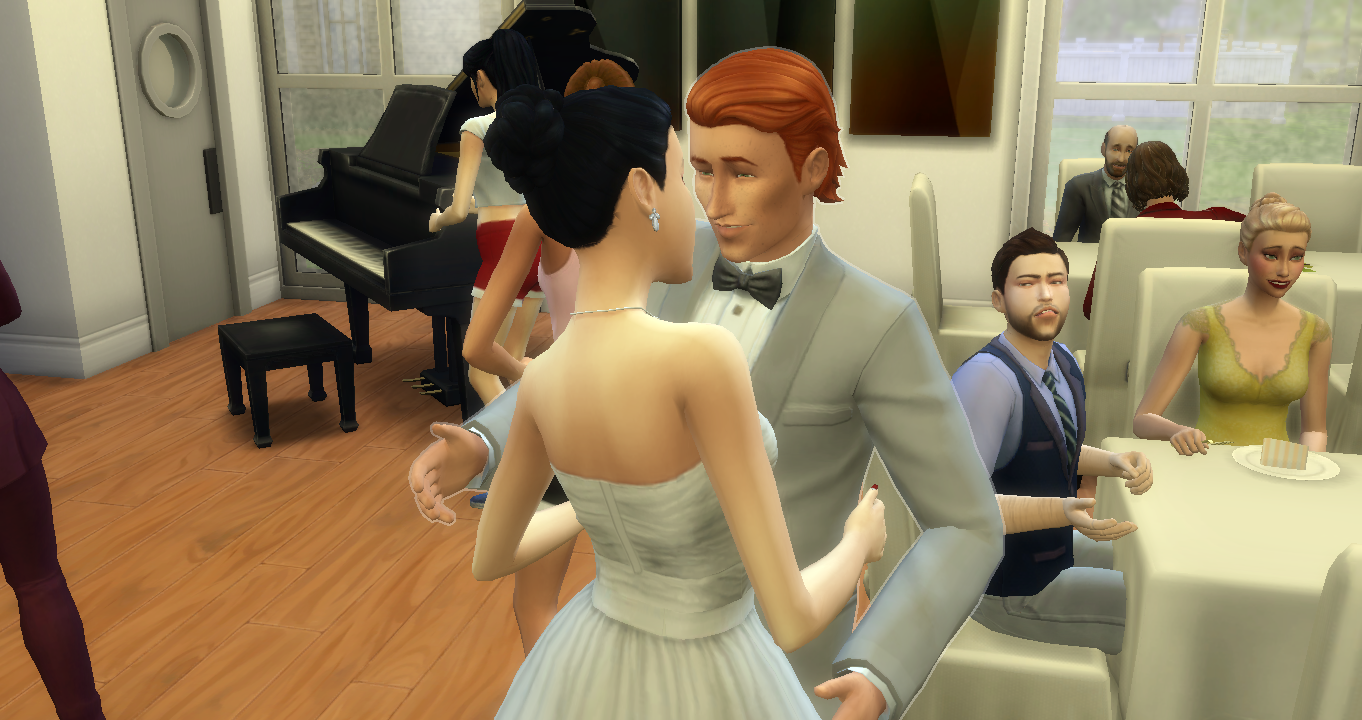 One last kiss and one last dance before running off to the honeymoon!
The Mayflies Legacy- a Random Legacy Story
Anhaeyn 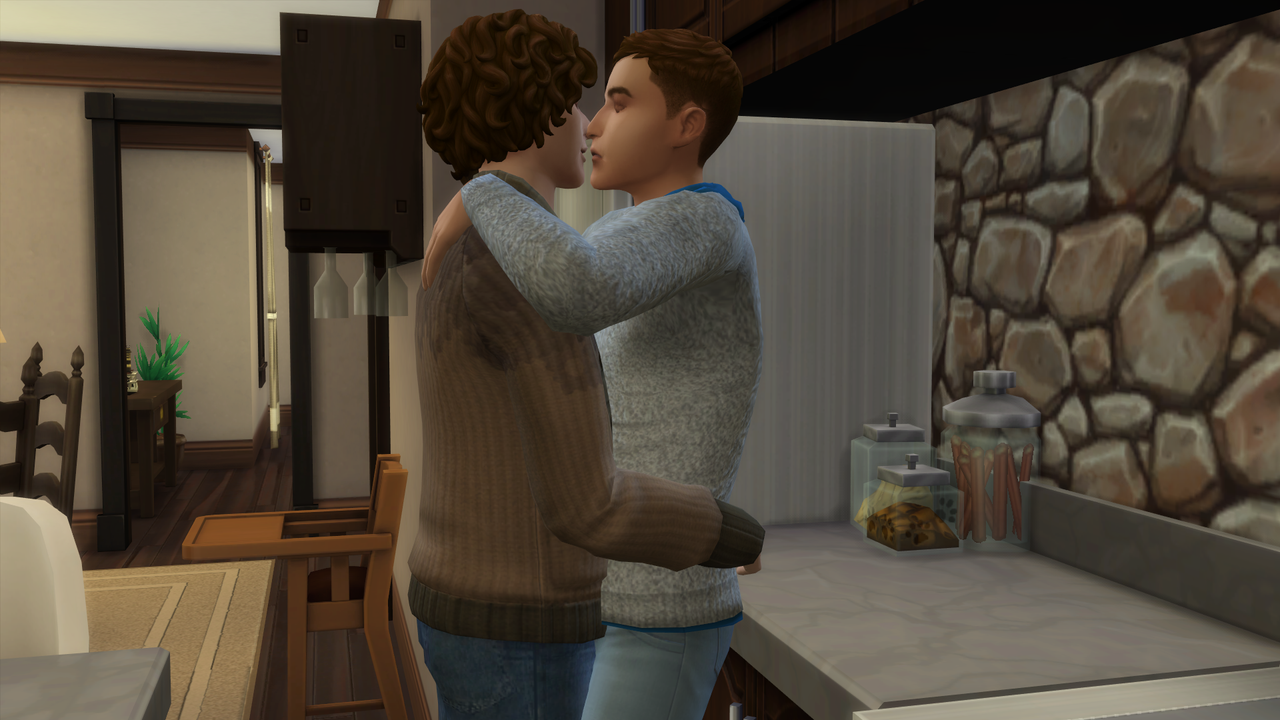 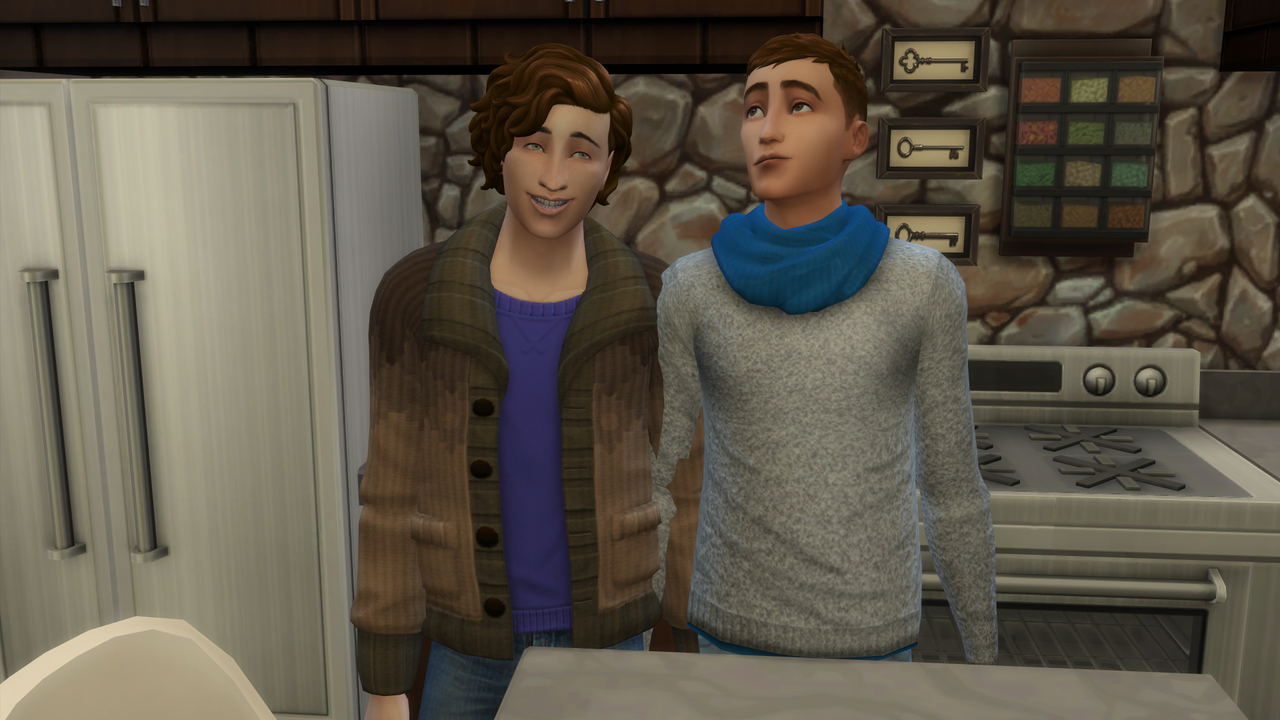 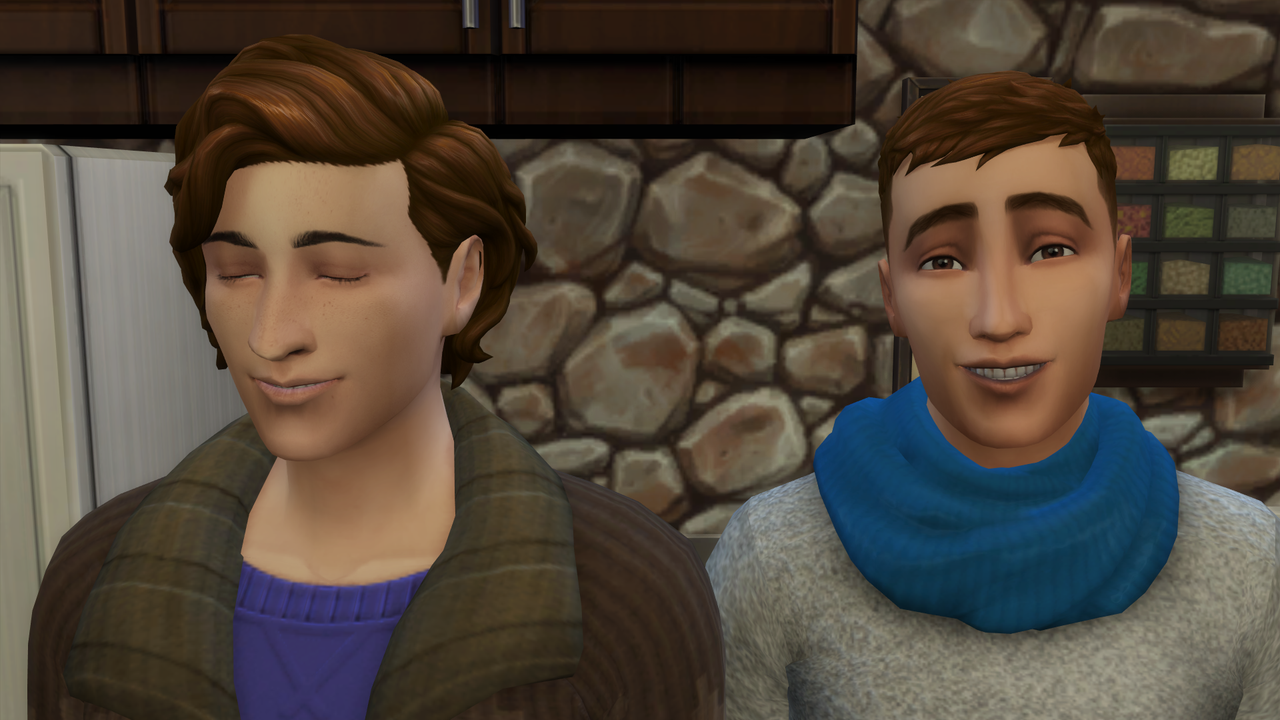 So, here is some pics from yesterday. This is from my desktop install where Mr Gavin Richards is a single living on the Roomies lot in Oasis springs (In the laptop install he is living in Newcrest whit a furry lady).

So I had this sim named Ann Dahl in my game. I do not know if she exists in other installs but I have her as a premade NPC in both installs. I have always liked Ann, mostly for her looks and I have always had an idea to try to hook her up whit someone. Even though she is married and have a teenage daughter. I did try it but as she (as every other pre made sim in my game) for unknown reasons do have an evil personality I had to take her into CAS whit the fulledit mode. This might count as "cheating" but I do not care about it. One evil sim less is a win. (we are not going to discuss the topic of "why so many sims whit evil personality's" here. I will make thread about it some day...). 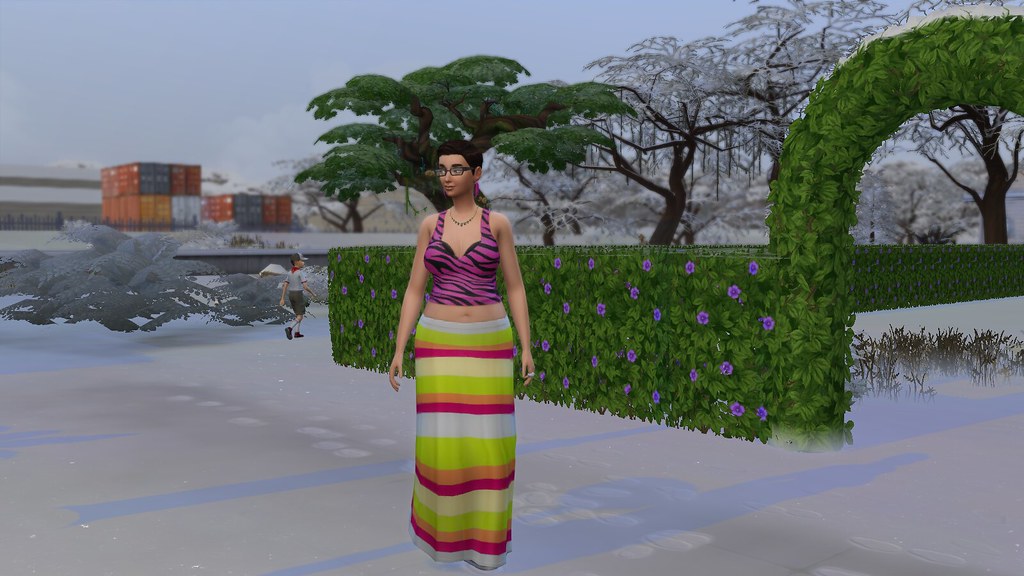 As told, Mr Richards is a single man so I made him get in contact whit the (now romantic) Mrs Dahl. As an author he do have the skills to write love e-mails and doing so really did give the relationship a boost. 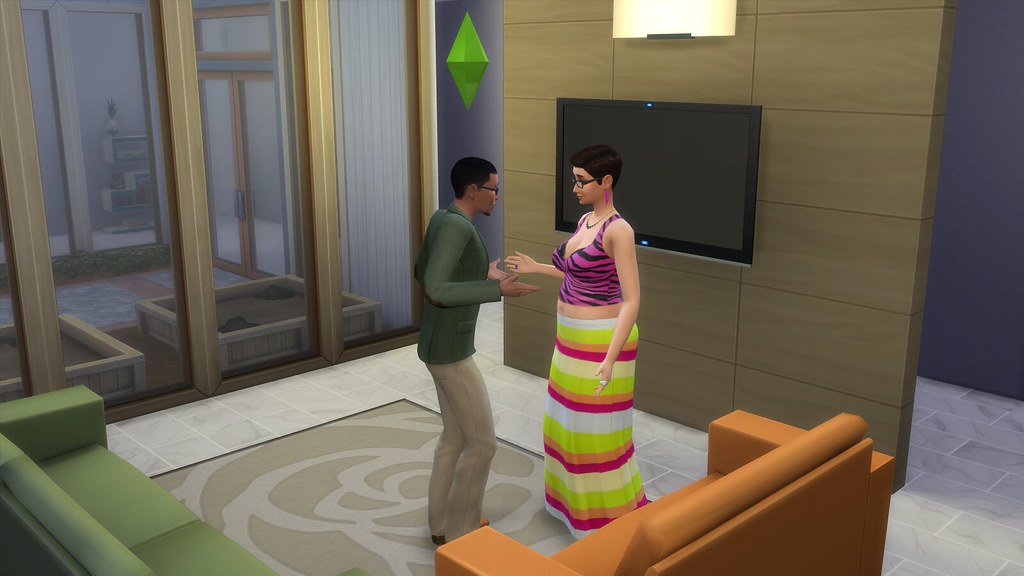 I sure were a little unsure about it all but as the saying goes: "Who says A must also say B". So for better or for worse I went on whit the story. I do not know how much drama there will be but I'm sure there will be some of it. I did took it as a sign that every time Ann went to visit Gavin the daughter or the husband walked by. 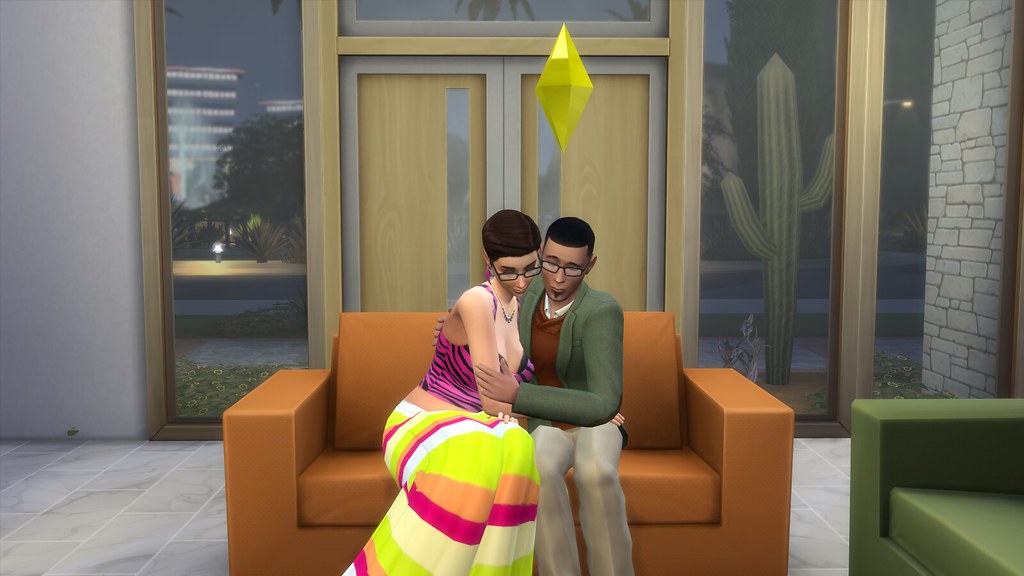 And in the end I do find the couple quite nice. Now, most of the "action" took place around Winterfest and Newyear and somewhere in between I let the two have a date. Their first one. 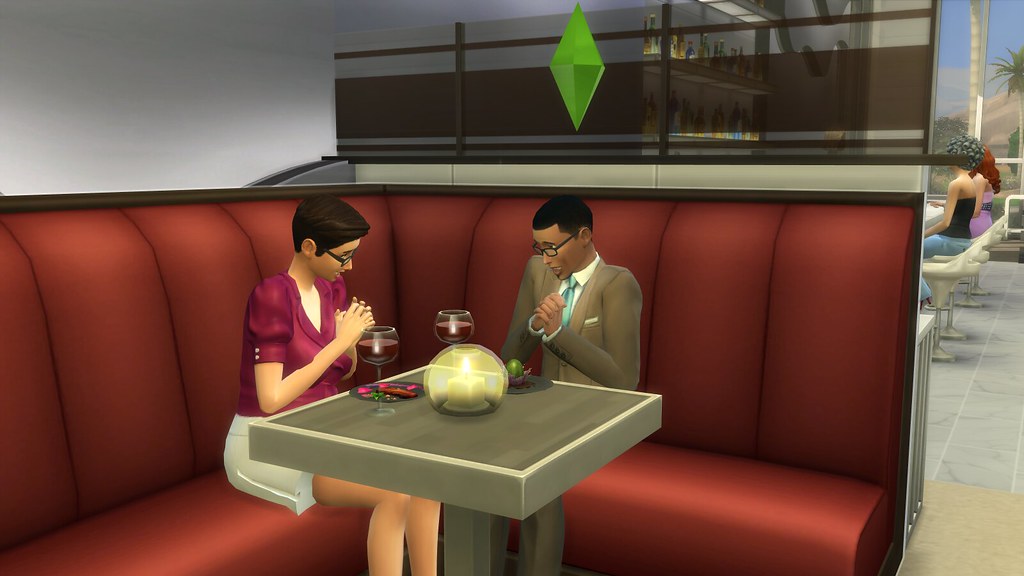 I did get very nervous just before I directed Gavin to convince Mrs Dahl to leave her husband so I saved. I thought: "OK,, she might be romantic but now you're doomed. She will slap your face and walk off, leaving you in misery". But No, it went just fine. So I send my congratulations to Mr Richards to the catch of a nice fiancee. 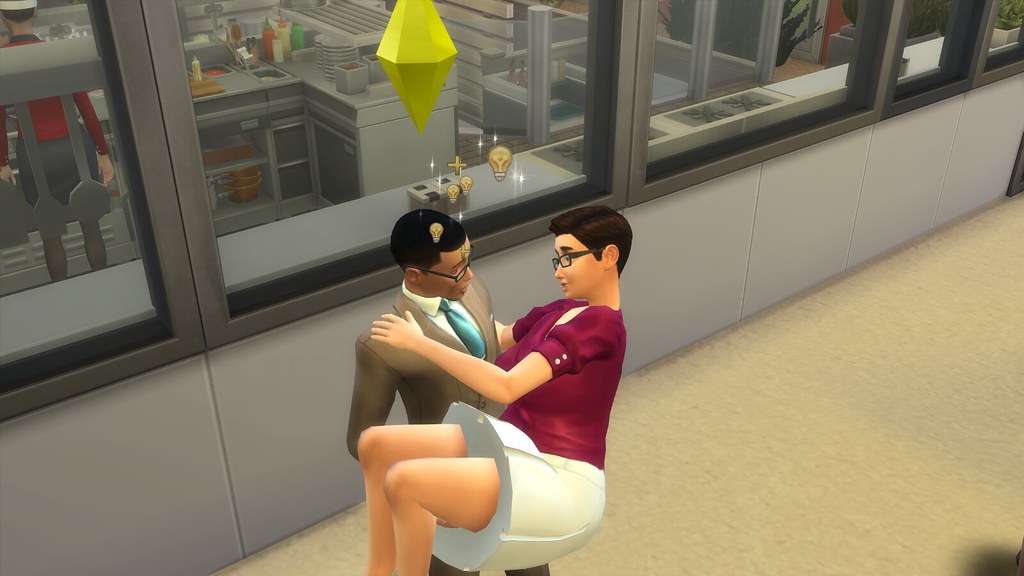 Sure, she is a little older then he is but does that really matter or bother anyone? I do not think so! I think that the ones who see a problem do own the problem themselves and that is nothing I have to care about. I'm looking forward to play this couple.

Notice to moderators: Please forgive me for breaking the 4 picture role this one time but it was necessary to tell the story. It won't be repeated.
Anhaeyn 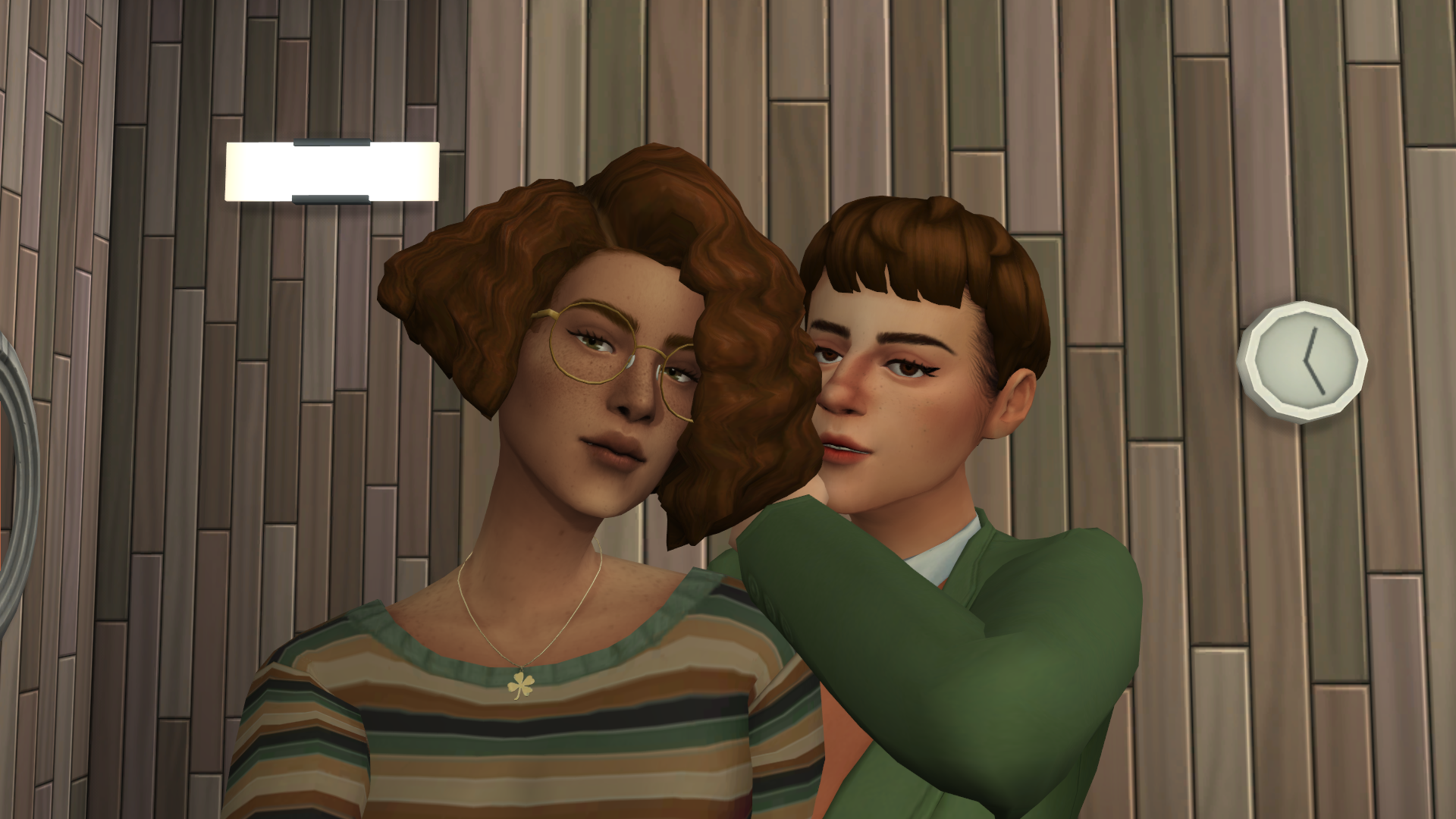