Grand Admiral Thrawn Sim (Star Wars: Rebels)
While I'm letting my Lady of Cao Sim rest for a little bit, I've started working on a new Sim--a version of Grand Admiral Thrawn (voiced by Lars Mikkelsen) from Star Wars: Rebels. I've been trying to make a Sim version of him for a while now. I first started with official reference art (lineart, then color), and then began working with screencaps from the episodes. (Sadly, there is no episode where Thrawn stands really still under good lighting without pulling faces or talking or blinking. Such a shame.)

The profile, I know, is disastrous, although the 3/4 view isn't so bad. However, at the moment, I'm trying to get his front view as perfect as possible. (I have no idea how to do the forehead ridges, if someone has ideas, please let me know.) I'm trying to use as few custom sliders as possible, although I did cave and use the custom chin width slider. Additionally, I'm using Mamyrocker's A Matter of Skin because it happens to be my current favorite; my default is Blueberry Bride.

Is there anything I need to tweak, or can I move on to the 3/4 view now?
Advertisement
k2m1too

This is just a quick note, as I don't have time to comment fully just now. My recommendation is to NOT focus on one angle at a time. Everything you do while you are working on the front view, affects the profile and the 3/4 too. You should tweak a little, then see what it did to the other angles. Lather rinse, repeat. That's just my thoughts (of course, that and a dollar won't even get you a cup of coffee, I'm afraid!)
Duh and/or Hello!
(simblr)
windermeresimblr
Field Researcher

Quote:
Thank you! I will go check the results and attack from all angles this time. (Also, is there a way to round out his cheekbones while still keeping them very prominent?)
windermeresimblr
Field Researcher

I'm working on all angles, and I now have an annoying...thing on the side of his face in 3/4 view. It looks like there's some kind of poking out happening with his mouth (or maybe his jowl? I'm ashamed to say i have no real idea what a jowl looks like, or what it is.) What is it, and how do I remove it???
fascisthater
Trainee Moderator
staff: trainee moderator
#5

This looks like a good start. I think the screenshots reflect a more pointy type nose though. I think his chin is more pronounced in the pics as well(protrudes from his face more and slightly lower than his bottom lip). Jowls generally refer to fleshy part of area under a jaw near neck. Thrawn seems to have a triangular jawline that comes to a point at his chin.
windermeresimblr
Field Researcher

Oh, thank you! For some reason, I felt like the jowl was, like, the lower part of the nasolabial crease area.

I've made a few more changes.

I also need to see if I can find a chin-to-neckline slider that works on adults--he's middle-aged, canonically, so I would prefer to keep him in "adult" instead of downgrading him...even if the YAMs get all the nice sliders.
windermeresimblr
Field Researcher

Ah-ha, I found the slider I was looking for! Now to sharpen that jawline some.
k2m1too

Both #aWT and Wojtek have chin-to-neck sliders. #aWT's links have been broken 5ever, but Leefish graciously uploaded them here. Wojtek changed their name to Anulaa89 and that's why most people can't find the working link (I was a bit more tenacious in hunting it down), but it can be located here.

And I promise I will get in here and review soon!

(Also, the jutty bits by the mouth can either be caused by "mouth depth" slider or the "jowls" one.)

PS: The "Jowls" can refer fleshy part of the neck, but I believe the EA slider actually changes the cheeks/mouth area near the mouth corners.
Duh and/or Hello!
(simblr)
windermeresimblr
Field Researcher

I'm now confused about the nose-in-profile, because the reference art suggests a nose substantially higher than the screencap included below--and my newest round of facial edits. I'm trying to find a happy medium, but it frankly baffles me. (I'm still proud of myself, though, for not getting into the makeup yet. Or the custom contacts he sorely needs.)
fascisthater
Trainee Moderator
staff: trainee moderator
#10

The nostril height looks better in this picture. The tip of the nose rises slightly in yours where the reference pic does not(not sure if you are able to alter this but may improve). When you try to create Thrawn go for that condescending and dismissive look he glares to the officer.
windermeresimblr
Field Researcher

Quote:
I was worried that if I went full-bore condescending, he'd look weird doing any other facial expression--but I'll give it a whirl! I think I messed with the nose tip height a bit, so I'll try inching it back to match the reference.
k2m1too

Okay, since you've made changes, I'm only going to go by your latest version for commenting. First... It is waaaaaaaaaaaay easier if you take the picture of your sim at the same angle as your reference picture. One important thing to consider about your reference picture is that the character has his chin tucked down, not a a "neutral" position, like your sim. If you try to force your sim to match the ref picture without compensating for that fact, your sim will get a bit distorted Also... if at all possible, it is best if you can put them side-by-side. To make it easier, I have done that with your reference pictures, and also changed the angle of your sim's face a bit. 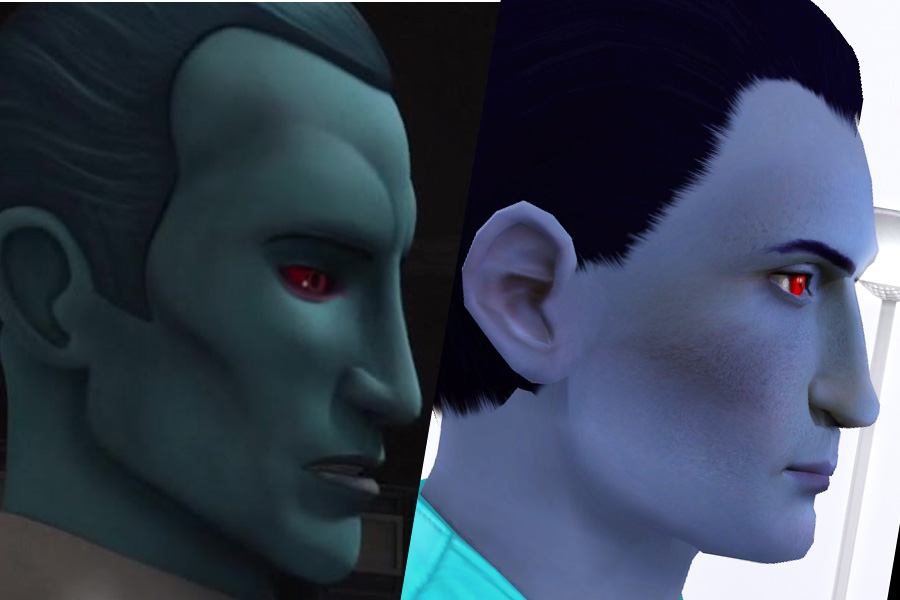 That said.... Ear needs some work. You may not be able to accomplish the changes with EA sliders, though do as much as you can with them. I'd suggest OneEuroMutt's ear sliders. They have quite a canon of sliders, so there is probably even more of use than just those.

Jaw needs to go up a bit, but chin needs to go down. I'd reduce the chin mass. If you have increased the mass, to make it "wider", I would use GnatGoSplat's chin width instead. It makes the chin wider without changing the overall mass.

Dent for the nose bridge, not so deep. There should be a smother transition from forehead to nose.

Checkbone shape slider should go to the "right", then I think they need to be lowered.

I need to get better about reference/Sim side-by-side--I tried with this pic.

I def. have to go get the OEM ear sliders--at the moment I only have vulcan/elf ear sliders, and that's not quite what I need, ha ha. But I incorporated the rest of your suggestions!

Good work! His face is really shaping up! There is one of OEM's sliders that controls the... er hmm... "width"? (not sure the dimension in this case) of the ear. See in the picture, the ref character's ear is is more uniformly oblong shaped? You sim's ear is more inverted pear shape. If that makes sense?

Also, don't forget what I said about not focusing on one angle. Perhaps we should check in on the front view a bit?
Duh and/or Hello!
(simblr)
windermeresimblr
Field Researcher

This looks pretty close. You seem to have captured the "Don't bother me. I'm smarter than you" pretentiousness of Thrawn. The next big hurdle might be the uniform.
windermeresimblr
Field Researcher

Quote:
Yay! I am so glad I captured that!
Yeah, the uniform--and the face ridges--are the next hurdle.
windermeresimblr
Field Researcher

I sincerely apologize for the long wait, but I finally started working on Thrawn's forehead ridges.

I am ashamed to say I basically traced them off of his reference art from the show. I haven't quite pulled the trigger on making it a blush or skin detail yet, as I'm concerned about their position.

I included the UV map as a guideline--are the ridges going to interfere with his scalp as positioned here? Should I add an extra channel for a shadow?
Back to top