Personally I think it was a little heavy-handed to remove the link. Chris Hatch shared a lot of stuff that way without it being removed. A lot of us (including myself) have downloaded and are using these mods. Gummi only tried to share one.

Anyway, I got the mod (and the link to SimFileShare) during the time it was available. I'll update it to the new version now. I am minded to share the link on my LiveJournal (if I can remember how to log in to it!). I've got a tumblr too, but I think downloads are usually easier to find on LJ than on tumblr. Of course I'll credit it to gummilutt -- I'm still not capable of making its like myself. I'll also test it in my game and let gummi know how well it works in my game; my highest EP is OFB. I play my teens really long term, but frankly a lot of skilling is boring, and my teens have got lives to live, and plenty of more interesting things to do. If there's one thing that everyone knows about teens, it's that they don't like being bored!


Quote:
Well, I was talking it over with my teen pal Andrew from Veronaville, and he reckons it's impossible to go through adolescence as a playable Sim without getting them. Andrew is a real neat freak but he's had acne enough times to regard it as a curse. He says, "Maybe if you showered like four times a day, you might avoid zits, but, hell, we've got lives to live! You can't spend your entire life in the shower." At the moment Andrew is acne-free, but his husband Julian has got a big plook growing in the middle of his face. Andrew says, "I hate to see Julian's beautiful face disfigured that way!"

Maybe those who use age mods to rush through the teen stage in 7 days or less might manage to avoid acne, but I'm sure, gummi, that, like me, you like to give your teens plenty of time to develop. (Well, maybe not quite as much time as I give mine!) So I think there's a good chance that your awkward teen will be surprised (and probably shocked) by acne at some point during his adolescence, no matter how hard he tries to attend to his personal hygiene. My playable teens nearly always get acne at some point. The level of hygiene needed to prevent acne is really very high.

Andrew is a a real neat-freak, obsessed with neatness and cleanliness, and very well organised. Unfortunately for him, he's saddled with me as his Player, and I'm chaotic! ("Don't I know it?!" says Andrew.) So, if your teen doesn't get acne, it probably says that you're much better organised than I am!

All Sims are beautiful -- even the ugly ones.
My Simblr ~~ My LJ
Sims' lives matter!
The Veronaville kids are alright.
omglo
Alchemist

You can get this here now. It's obviously not mine; I'm just posting the link.
Tumblr

I've noticed that some people, like Chris Hatch, can post SFS links to their own creations on the forums without submitting them to the main downloads section, and other people cannot. I just now downloaded a Chris Hatch hack on SFS linked by Chris Hatch on the forums that he posted back in January. It's still there, no moderator has removed it.
grammapat

Quote:
===
I remember how broken-hearted I was when I realized political crap was just as rampant at MTS as in the "real world"... there is no "safe place".
Namaste... or "go"
topp

Are you saying reading the Overruling™ Rule® That Overrules All Rules And Other Stuff Too didn't make you realize it already?

Can we get an advanced warning if anyone's going to go through and delete Chris Hatch's links? He's posted a lot of really useful things, and since he's apparently gone inactive, they could be lost forever.
Tumblr

It would be cool if someone make decoration, sculptures, clutter,...related to Oceanography career for SIMS 2
MOOKIEBLAYLOCK

The unclog toilets conversation in discovered-thread made me think of the big screen floor-standing TV. It can break, but the repair interaction is broken. Would be neat if someone figured out how to fix the interaction so it can be repaired when it breaks. I took a stab at it once but it was too complicated for me.
If you have questions on how to use SimPE or WW, you're welcome to PM me.
didyouevenmakeasound

yes, I SO HATE how terrain paint works in ts2! The edges are just weird because of the click system, and it's so hard to make a natural looking path or terrain that I usually don't bother at all!
You can call me Diddy (or Eve, if you want to go by my real name) :)
My Simblr is simping-simmer. Come and join me there for a chat!
You can also find me on the MTS or PBK Discord servers under the name 'Evenfall'.
Want to know the latest news in Carregffynon? Click here!
Lena88
Lab Assistant
DELETED POST
30th Jul 2021 at 4:35 PM

This message has been deleted by Lena88.
grammapat
Mad Poster
DELETED POST
1st Aug 2021 at 1:38 AM

This message has been deleted by HugeLunatic.
gummilutt

One of my Sims kids is looking for bugs, and their face when they don't find one is heartbreaking. They look so sad! And it does seem to strike out a lot more than it succeed. I usually do most things in game at least once, but never even got close to collecting all bugs because meh. Would be neat if the chance was a little higher so I didn't have to watch them suffer as much

If you have questions on how to use SimPE or WW, you're welcome to PM me.
HugeLunatic

That one the repair interaction works. The huge screen one, I wanna say 3 tiles? I think it came with FT or AL.
If you have questions on how to use SimPE or WW, you're welcome to PM me.
clsve

I think it would be neat if there was a mod to have that sims 4 feature where getting promoted will give you lil knick-knacks related to the career to put in your house. It would be pretty cute how your sims' house slowly gets more and more character as the businessman gets office supplies and the movie star gets posters of their films
guirnaldas
Lab Assistant

I would like a fix to some car windows, including the school bus and other NPC vehicles.
example:"
This is some official CC car I think and is done right 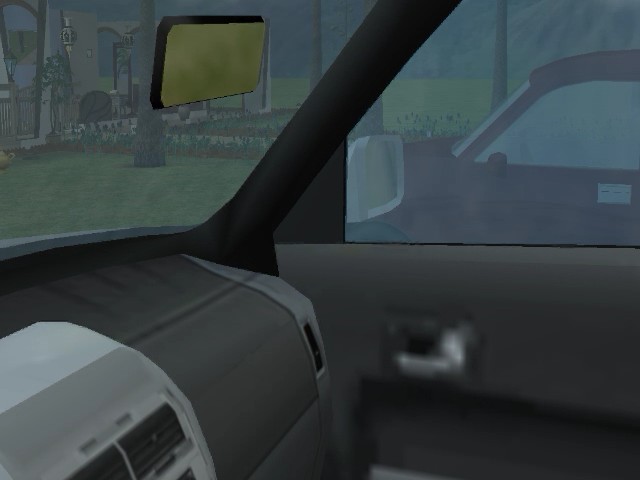 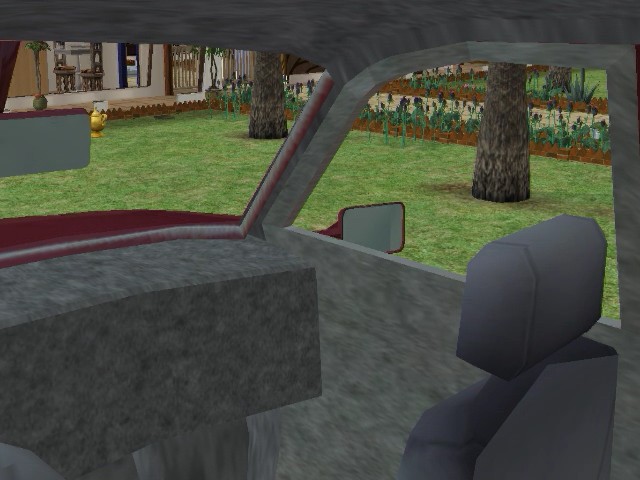 Quote:
Like more career rewards?
You can call me Diddy (or Eve, if you want to go by my real name) :)
My Simblr is simping-simmer. Come and join me there for a chat!
You can also find me on the MTS or PBK Discord servers under the name 'Evenfall'.
Want to know the latest news in Carregffynon? Click here!
sugoisama

Quote:
Kinda, more like something that's implied with Alexandra O'Mackey, where a sim brings home some small thing related to their career (like a themed lamp or wall deco) in their inventory, maybe upon promotion
sturlington
Forum Resident

I wish I could have the repairman come over every day like the maid.
Lena88
Lab Assistant
#12095

I dont know if such thing exists. I want MAKEUP KIT as FUCNTIONAL OBJECT. That when you click on it you get option to change your look. It also would be cool if such object could be used from sims inventory.
AndrewGloria

Quote:
Sounds like your households must be a bit of a disaster area! I've never exactly measured it, but I reckon my Sims call the repairman about once a fortnight or so. Which is still quite a lot compared to real life, but somehow manageable. Most of my Sims usually do plumbing repairs themselves, but call in a professional for anything electrical. This helps build up their mechanical skill, while keeping them safe from electrocution. One thing that does, I'm sure, make a big difference in my game is that I have Pescado's plumbing-lessbreaking. This doesn't stop plumbing breaking, but it happens much less often. I have a feeling that this mod may never have been updated for the later EPs. Maybe somebody would like to try it out and see if it works. It it does need updating, maybe one of the current crop of active modders (kestrellynn?, midgethetree?, simler 90?) might be interested. It's a small simple-looking mod, so I wouldn't think it would be too difficult, and IMHO, it makes the game a lot more enjoyable. It doesn't take long for the novelty of watching a Sim getting soaked while trying to mend a broken tap, to wear off!
All Sims are beautiful -- even the ugly ones.
My Simblr ~~ My LJ
Sims' lives matter!
The Veronaville kids are alright.
sturlington
Forum Resident

Thanks for the tip, I'll look into that mod.

Some of my bigger multifamily residences have a lot of bathrooms, and something always seems to be broken. Usually I'm doing something when I hear the toilet backed up sound and can't be bothered to have someone go plunge it right away, and then I forget which toilet it was. I also absolutely hate it when the sink is spewing water everywhere. Other times I just don't notice that something, like the dishwasher, is broken. So it would be nice to have a handyman stroll through these properties once a day and take care of anything that needs doing. Like a super.
omglo
Alchemist

Christianlov had a mod that let you assign jobs to Sims, and they'd come over at a set time to garden/repair/clean etc. That might work for you, assuming it's compatible with AL.
Tumblr

Thank you for this! While searching for this, I also found the Sim Control Tool, which is just the thing I didn't know I needed for my large households.
Fyren5

I'd like to see a hack that makes witch spells autonomous, just for laughs (likely not possible but hey, it's for laughs!). Could you imagine playing and then a random witch just Tabula Rasa'd your Sims memories away? Or you see a bunch of Sims being chased by bees or something