And I think Jago, Count of Pendarke, will fit the role admirably. Well, he's not nice at all!

His traits are evil (of course), brooding (you can tell), mean spirited, and hates children. Oh, and he's brave too - well a cowardly villain wouldn't be much use would he? He's also half brother to the late king, born the wrong side of the blanket, as the saying goes. Even so, he would have a claim on the throne, if one or two little obstacles could be cleared out of the way. The name Jago is Cornish and means 'supplanter', which is very appropriate since that is exactly what Jago intends to be. 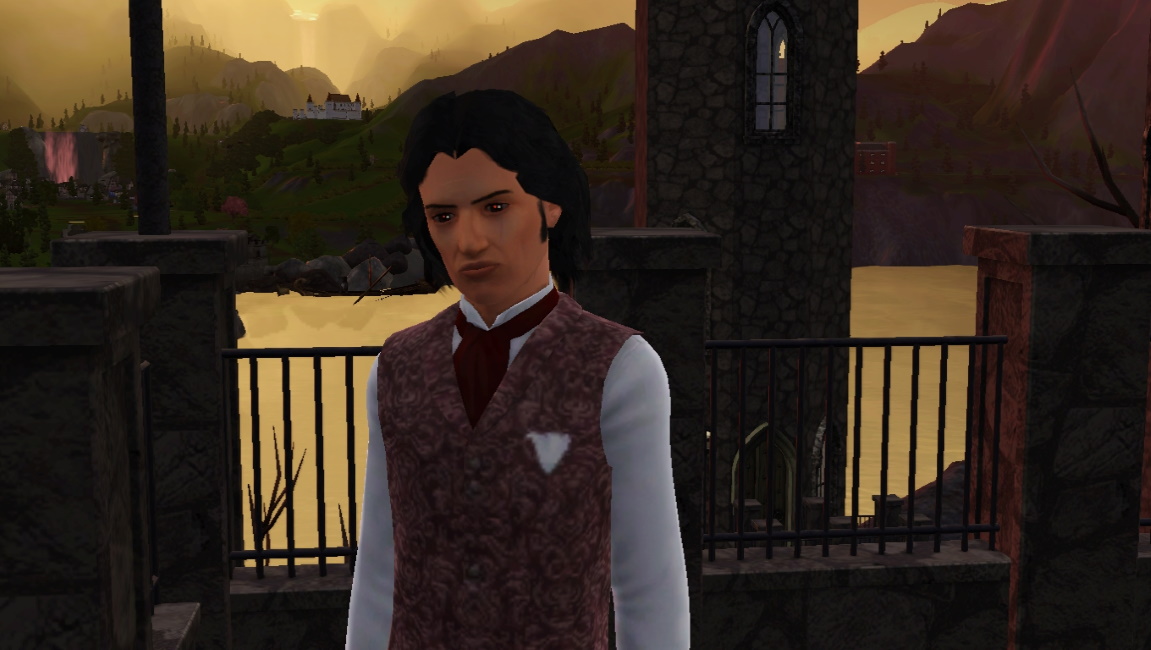 As dawn breaks over Nantrelor the sunlight struggles to penetrate the gloom that broods over Castle Pendarke*. That may be the light of dawn in Jago's eyes, but I seriously doubt it. He's been away for a few years, mixing with some very dubious company, but now he's come back to find the throne occupied by mere child, and his half sister (whom he detests) appointed as Princess Regent. He finds the idea of bowing and scraping before either of them highly distasteful. As I said, one or two 'little obstacles'.


*NOTE: I take no credit for the lot, it came with the Moon Valley world where I think it is called the 'Forbidden Castle', but it provides the perfect setting for Jago. On the hill in the background you can see my own Brelor Castle and, to the right of the tower, just a glimpse of the winter palace at Polkreath. Those are my only additions to the world.
Simblr: Elyndaworld *** Wordpress: Tales of Nantrelor
natbsim75
Field Researcher
#77

1. Nope! This is not a new "Vampire Lounge".
2. Vladimir Schlick and Beau Merrick are just standing outside of the Movie Cineplex. I can't understand why Beau is so focused on Jupiter Belle who aged to a teen 1 or 2 days ago and minds his own business doing his homework

3. What is more hilarious about this photo? Alan Stanley's ghost story in plain daylight or a big bad vamp who seems to be really afraid? (poor Vladimir has the "coward" trait

). The worst is, though, that the "big bad vamp" is "smoking" and not because he is... soooo hot! He is "smoking" because he is burning up... literally! Stupid sims all over the sim-nation, I had to use MC's "Go Home" interaction on him because I didn't want the remains of a... vampire barbeque outside Bridgeport's movie theater.
(In the background, you can see my poor active sim, Jace, who plays his guitar for tips and only a paparazzo seems to watch him. When I started this save, Jace had the lifetime wish to become a Master Mixologist and he was trying to make some money only by playing for tips and moonlighting at bars but this screenshot is a bit old. After about a sim-week, Jace rolled the wish to get a job in the Music career and whatever my sims wish for -unless they wish for a hot tub and they have only 800 simoleons in their bank account- they get it. Now, Jace rolls wishes only for promotions on his job and he has become a bit boring...)
Back to top