Quick Reply Print version
Search this Thread
Replies: 4 (Who?), Viewed: 9133 times. | You are currently not a member of this group. Would you like to join it now?
cord11

Cord11's attempts at making a dense city in a game made to simulate the suburbs
Hello, welcome the thread I finally made. It's got some words, so that's cool. To be upfront this isn't going to be updated much, as real life is busy and honestly video games don't really matter that much. That said, I would like to welcome you to my amazingly, creatively named neighbour: The City V2. It's a work in progress. Indefinitely. This is my 2nd attempt at making a dense city neighbourhood. The first was lost to an unfortunate hard drive failure, er computer crash. I really should try hooking it up to my laptop and see what happens. Anyway here's some bad teaser pics of my work in progress. A block of lots. 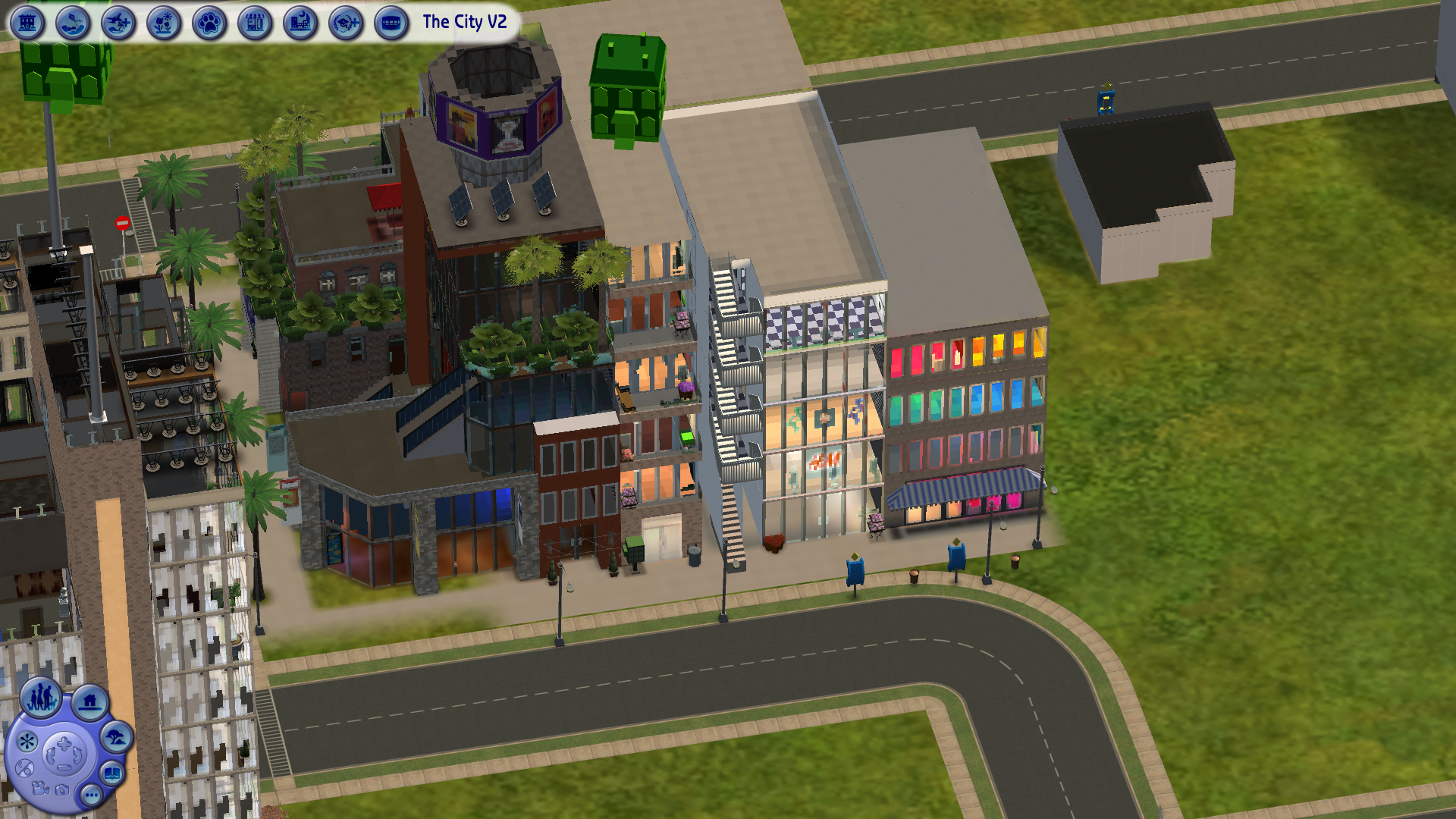 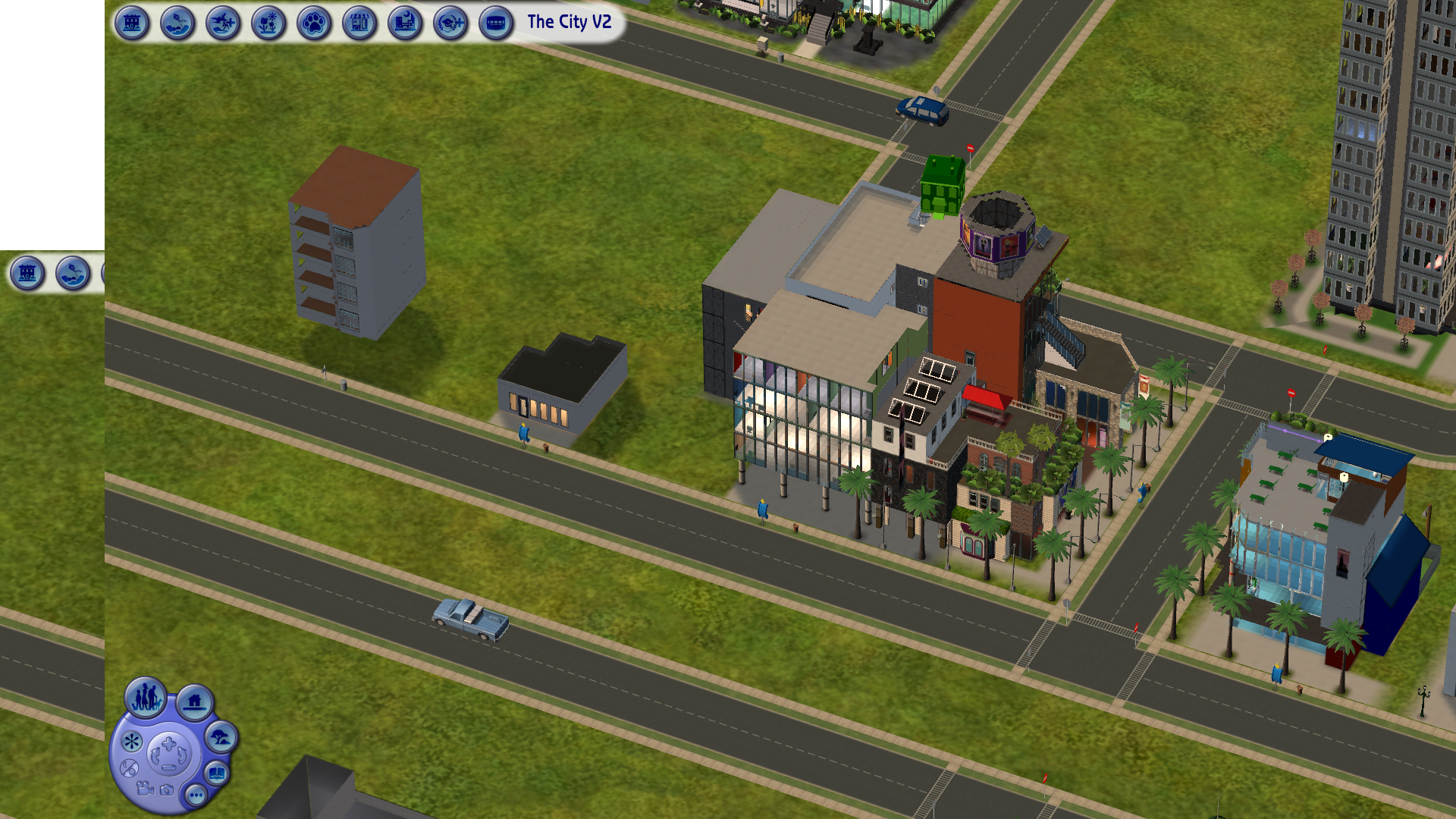 Ignore my incompetence at using MS Paint in that 2nd pictures.
Now what's special about these lots you may ask? They're stacked! And not just in the traditional ground floor community lot with housing above, no these are proper wall to wall buildings! I was orginally inspired by the large blank walls of Zarathustra's shopping district lot and bam time to make a Tokyo inspired apartment tower, a mere 4 tiles wide. It fills the space that would be forced outdoor space in the game without the Lot Adjuster. Now there's really tiny 1 tile wide alleyway in the middle of the block, it opens up after the yet to be inserted under construction retail/apartment stacked lot. It's not pictured yet, but that building has been slotted into place, and it fits well. Kinda cozy having the lot imposters surrounding the apartments. Also Tokyo inspired is the commercial building with the staircase on the front, it has a retro dinner on the top floor, and a clothing store on the first 2. The middle floors are yet to be fully fleshed out. The neighbouring grey building is a karaoke box/bar and arcade. The first floor houses a kinda sad and lonely dance sphere that I'm considering replacing with a small restaurant. There's also a small office building, that might end up as part of an attempt to have a sim run office business. It might just end up with a really rich placeholder sim providing an alternative the business career track

These 2 pictures miss a lot of the neighbourhood, filled largely with lots that aren't mine, but there's a few of mine I just haven't gotten to yet. There's at least 2 households of sims already moved into somewhere in the city, but I forget if I moved in the Gavaian(??) into the attached sub-hood of Elsewhere or not. Also just gotta say that one family was created before I decided to seriously play the neighbourhood. Yikes. You'll probably see them eventually. :p

It looks good so far. You've packed a lot into the block, and added some nice details with the solar panels and plants, and the advertising thingy at the top.
cord11

So I finally have a 2nd update, and this time it involves a few Sims even. Here we have the Gavigan's house. Small and tall is the way to go for more space. It's built on what will become a small one-way side-street of other 1 tile wide houses. This makes their house have a working lot size of 10x15 with the 5 tile wide roadway. Service, carpool, and pedestrian portals are all there and work well. Too bad you can't seem to force sims to walk home after walking to work, it'd be very useful in these types of houses. Here's the main floor of the inside. I intended to fit in a bathroom somewhere before moving any Sims in, but forgot that and moved them in thinking it was 100% complete Next up we've got my in progress area that I've named Spartenborrow, loosely based off of the neighbourhoods in the City of Victoria immediately East of Downtown. I'll let you find their official names if you're curious, there's like 5 of them in the denser area I took inspiration from, one's even 0.5km by 0.5km

The Newtons ended up moving into the City Centre lofts you can see in the corner. The Picasos ended up in a Zarathustra townhouse, and well it turns out Mathew is a little too comfortable with himself these days "Yeah! It was my first time and I'm pregnant!"
And Jessica too it seems, they're a match Also this is a little corner store I built a while ago. Nothing else pictured was made by me, but this little shop was made for a slightly more rundown area next to Spartenborrow. And finally, we have a sim from the family I made before I was being serious with this hood. Y I K E S. Some nice glitched out CC there. I'm planning on possibly making him into a serial killer, however idk if that'll pan out in the end. Just not natural you know? Regardless, the good news is that he never met anyone of the Gavigans on his walk past, so even if one of them ends up his type, they're probably safe. I think I watched too much Criminal Minds when I was younger. Hope this isn't too dark a note to leave it on.


There's a few more playable sims living in the city still, all of whom I've made, but it turns out I didn't have any pictures of them saved already, and I was kinda lazy and didn't launch the game to make this post, soooooo yeah. The quality is a work in progess, but hey, I found the Windows 10 gamebar feature with it's built in captures and screenshots, and it's made it so much easier to get decent pics. No need for printscreen and MS Paint, no need for launching the game through Steam, and no need for the in game camera, so that's a plus.

Also thanks Cher64, but all the roof details were on the lot made by Zarathustra I just plunked down and built next to, so I can't take any credit

There are some funny pictures in this update, but I think my favorite is Matthew running around naked.

OMG Being naked is one thing, but being fully dressed and still look naked is WEIRD in capital letters XD
The glithy CC would worry me (I always worry about glitches) but that Sim is too amusing to get rid of!
// Playing a Monopoly game town //
Back to top