I got a little bored with my play in the laptop install and decided to challenge myself a little. I already had created (read: redecorated) this tiny house in Willow Creek, making it "off the grid". And now I wanted to try something now. So I did dig up an "old" sim from my library. Her name is Scarletta Ambrams and in the pic you can see her with some of her neighbors who came to visit... about 48 hours after moving in... By now I have some experience whit sims gardening and roughly know where in the worlds I can find things to grow (trees carrying fruit, mushrooms, wild onions, berry's etc.) and my idea is to make her to take care of herself as mush as possible. The hard part will be to collect water but there is a river nearby so I think it will be OK. The problem will, however, be that she wants to be a famous author and she need a computer to write anything at all... 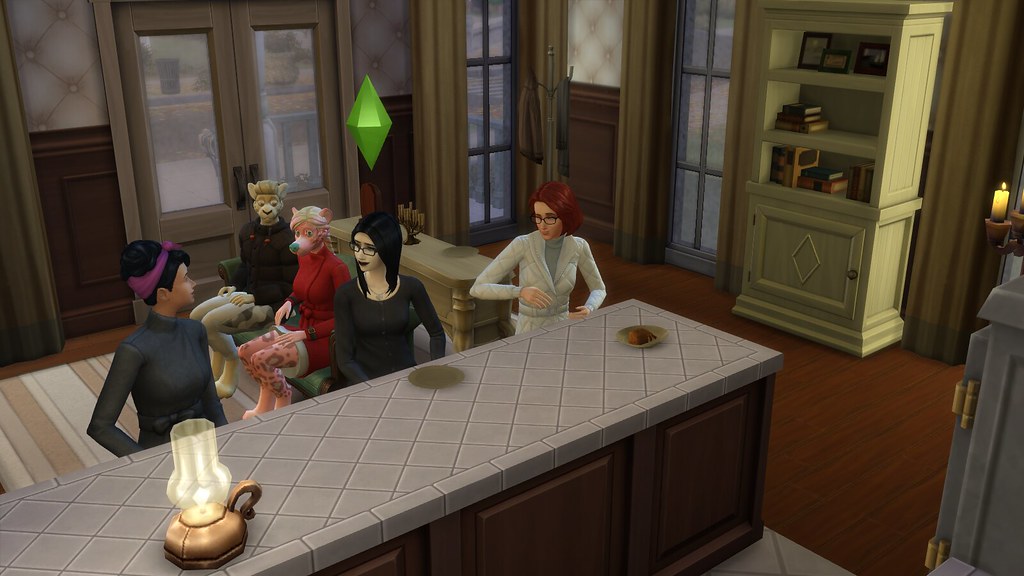 Question for you: I have been searching in buy mode for a fertilizer but with no luck. Do anyone know any download?
Craft90

Edit: Seems like this is a common issue. Apparently you need a beebox or bugbox. Even though the message said nothing about that...
Mrmo
Scholar
#2528

I have been playing some random families from both of my installs and Ms Ambrams is one of them. By now she have been collecting a large amount of different fruit an vegetables and she have been planting a lot of them. I even gave her a bee hive so she could get honey. She liked it but she don't seem to like the taste of fruit. "Too natural". Well, it's supposed to taste like fruit so... The BBQ at the porch I placed because she wanted it and it have a lot of new interactions, Food, that I have not seen on a "on grid" lot or any other BBQ. The biggest issue is that that ice must be added to the fridge about once a day and that there is no running water. But I did download the waterpump from here: https://modthesims.info/d/653145/un...water-pump.html so Scarletta do not have to walk all the way to the river. 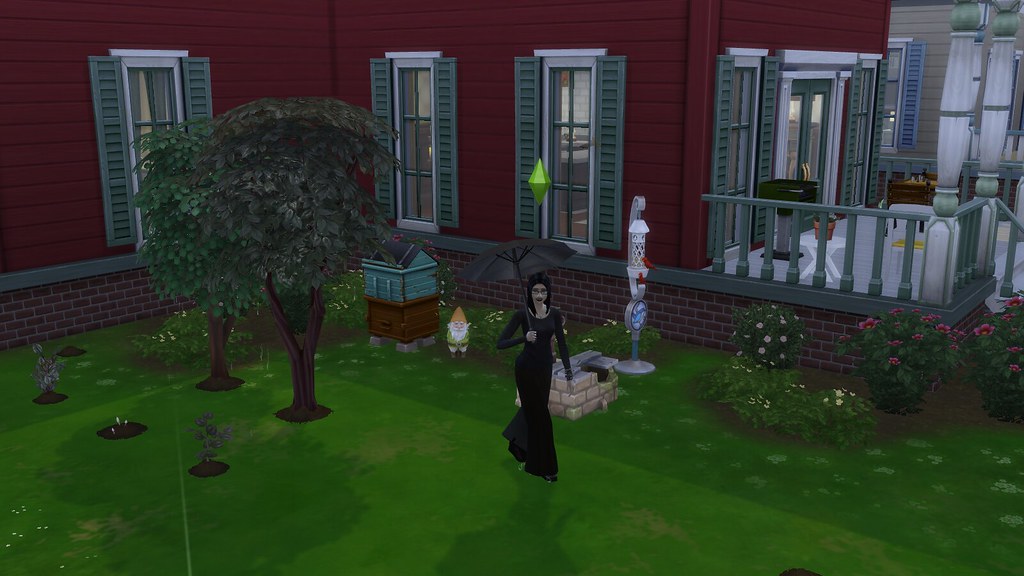 I gave the Pancakes a makeover in my new file.

In a previous file, my sim got an inheritance call that had the condition of getting married within 7 days of the call. She got married to a random NPC, who turned out to be an alien. And it took me a while to kill him off via fire.
CatMuto

Made a painter Sim and decided to make her a little 'odd' in terms of fashion. Lots of colors and her home is full of furniture of different colors, too.
Built her a Micro Home and played a bit, but since that seems to make the game TOO easy (Painting Lvl 6 within a few hours, tons of Good Friends just by a mere greeting, and one job promotion per day), so I am reloading the save as I was mid-build and just make her a regular home or a 'largest Tiny Home' I can.
Hamishmc
Instructor
#2531

Experimenting with making a pond for the Windenberg Summer Home. Now I've got to move my chosen family in to try it out. I needed a "how to" manual.
simmer22

Haven't played in over a year. Went to open Origin with the intent to update the game (which I haven't done in ages), and... ended up playing a bit instead. Even built a house (eeeh result - I hate building...) and made a family, for old times' sake.

Thing is, my game and my CC still works in this version, and I have an older version of S4Studio that also works fine with it, in case I decide to tinker with some stuff. So do I update and potentially have to end up fixing everything that's broken (I know some that might be) or do I keep my game the way it is? Decisions...

My laptop still thinks it's a jet engine whenever I fire up TS4, for some mysterious reason. I don't know what is going on, but it sure doesn't like the game (but no issues with TS2, and not as bad with TS3 which I haven't used for even longer, so...).
My site - TS2 baby stuff - ToU

I moved one of my Families into Henford. They had the usual visitors and, for some reason, they all stood crushed together talking in the Porch. There was no reason for this as one of the children, who had been playing outside, came in and went through into the house, going through several bodies on the way, and then one of the visitors did the same. Eventually the remaining visitors left without ever going into the house. The final one stayed for ages, washing dishes, using the Vacuum and feeding the Chickens before leaving with a Rooster in her arms. Sims in my towns all seem to be weird or maybe just criminal.
Hamishmc
Instructor
#2534

I just lock the gates or door. Anyone coming into my real life flat and doing the washing up and vacuuming would be welcome to go home with a chicken but not my Rooster though!
andes
Test Subject
#2535

I'm trying to make a sim based on photos, which I find a bit hard.
Sokisims

Yeah, she has a cute doll face so I think that would work well! My sims just seem to look all the same no matter what I do. I'm not very good though, half of the time I don't know what I'm doing, I'll just nip and tuck and hope for the best.
LucieSims

Rubbish boring events as casual. My simself's cousins , aunt and uncle came to visit my simself's parents and her. They are all watched the New year tv show , then I don't know why but my simself and her cousin was deported to the other part of the family's house, and she stayed with her cousins alone, speaking speaking speaking.
I am tired I want an interesting gameplay ....
My story blog in French (FR) / Mon blog histoire en français : http://simsophonique.ek.la/
Enki

I like that, it sounds thought through, and dust bunnies being magical made me laugh, my sims just stomp them in anger.

I'm playing my new farmer sims in Henford, running errands and growing a garden. My sim have an intended, because being in charge of cultivating the land they have some personal responsibilites as well later on, but I never know what to do with the extra sim, so he just tags along and gets prowled upon by my more charisma endowed sims, constantly in a flirty mood. Hope he doesn't switch orientation before my sim is done prodding the earth. I thought I'd let them be unattached from out of CAS, and have that ceremony in game, so right now her Gilgamesh is more into Enkidu than her. It makes me laugh though.
Mrmo
Scholar
#2541

I had a sim working like a maniac to max out his Handiness skill. And when he was done, after doing repairs and upgrades to almost everything in the house, I did send him to the mine by the Oasis Springs park. I did not know what to expect really but I thought it would be anything better then a text based "mini game" where every "false" answer brought him back to the entrance. Thanks EA...Not! I don't know if it was one of this "upgrades" that added a new music channel to the TV-set but it was there all of the sudden. With "videos" from Sims 3 showtime.
Mondenkind

I just had a re-watch of GoT and I've now decided to play four sims families rotational, each three sims days. Wolf (Henford) , Lion (San Myshuno) , Stag (StrangerVille) and Dragon (The celebrity pack neighborhood, I always forget its name.. And, yeah, I know, the names are not very creative lol)
As they each start with zero funds, let's see who becomes the biggest house!
The first rotation was pretty uneventful, typical Rags-To-Riches stuff. The Stag family was the only one able to find a spouse and impregnate them right away due to the fast relationship build when one Sim trains another.
Back to top