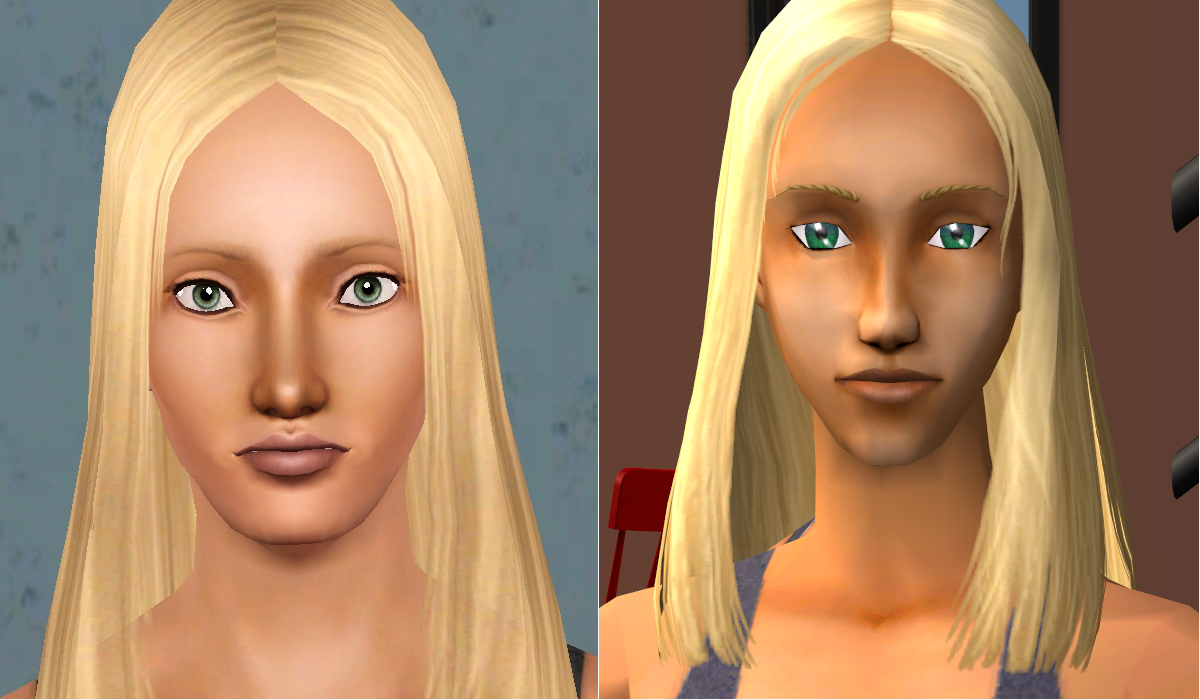 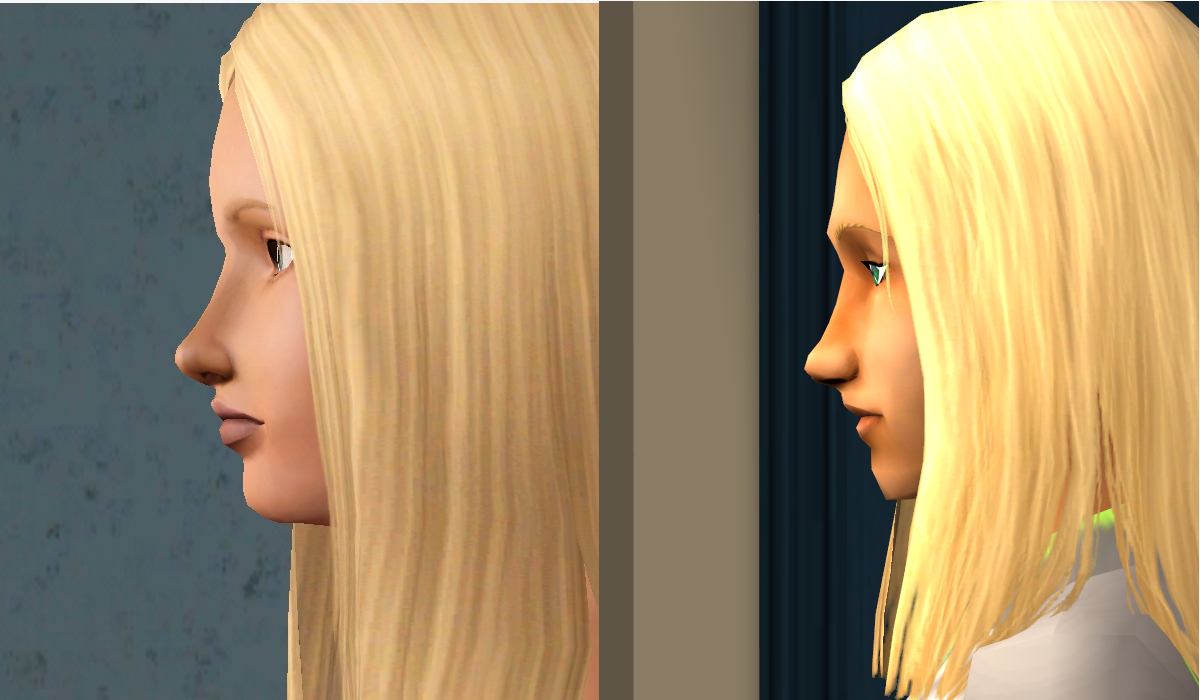 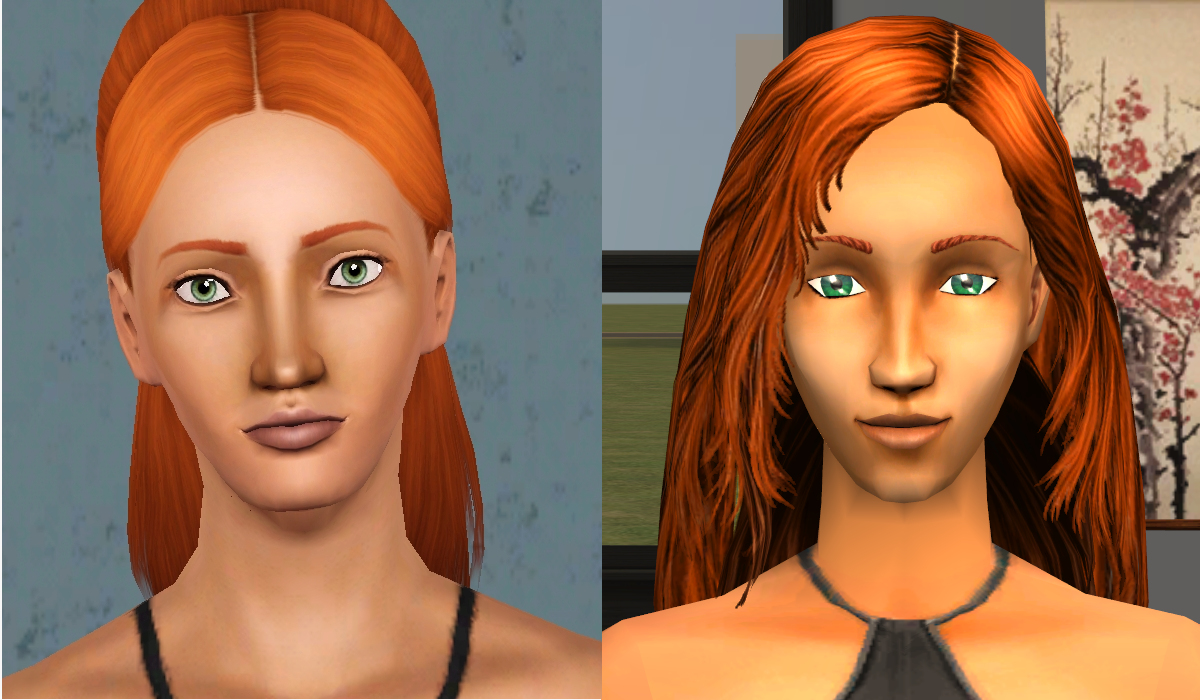 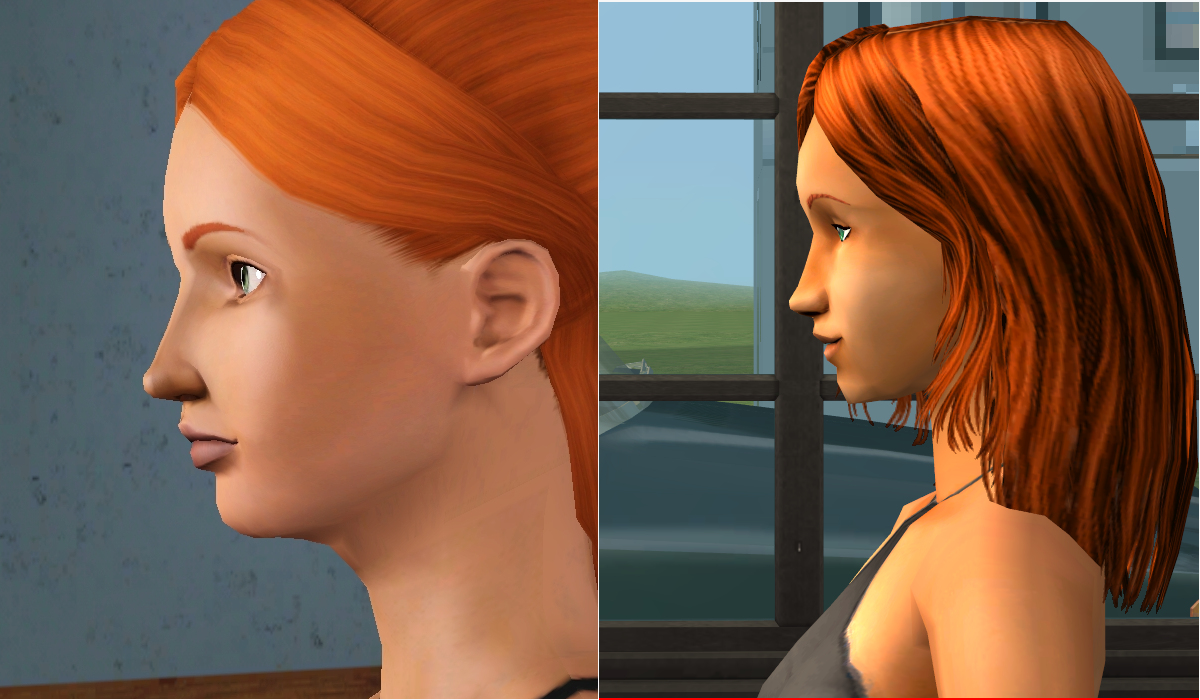 I'm pretty happy with how Dina turned out but not so much with Nina, and I can't figure out why. Looking forward to everyone's feedback

Great start with both, especially Dina!

I would actually say for Dina maybe making the chin just a *touch* smaller and maybe put her eyes a little closer. That's really nitpicking on my part though lol.

As for Nina, from the side profile it seems it's mainly the jaw that needs some adjustment. I'd adjust her chin slightly and make it smaller. Make the jaw a little more rounded instead of gaunt but still keep it fairly thin. The part underneath the chin also adds more puffiness to the face than there really is. If you don't have it already, I'd recommend one of the "Chin-to-Neck" custom sliders and adjust that so that the bottom of her jaw isn't so pronounced. And the last thing I see right now, possibly adjust the cheekbones a bit. In TS2, Nina's cheekbones are fairly pronounced so you want to have that show here as well.

I hope that helps a bit!
You have been chosen. They will come soon.
WatermelonSandal

I'm looking at the eyes and I think you should play around with the upper and lower eyelid height sliders. Also look at the eye apex and the corner heights.
Creator of Shields Road [TS2] - Carrer de Hebra [TS2]
aisquared

To me Dina's look is spot on. For Nina, the eyes should be narrower, or the eyelids a little droopy.
Looking for something converted to TS3? Visit Xto3 Conversions Finds for all your xto3 needs.
Main simblr: aisquaredchoco ( ͡° ͜ʖ ͡°)
Affinity

Dina - I made her chin smaller, a bit longer and made her jaw a bit thinner as well 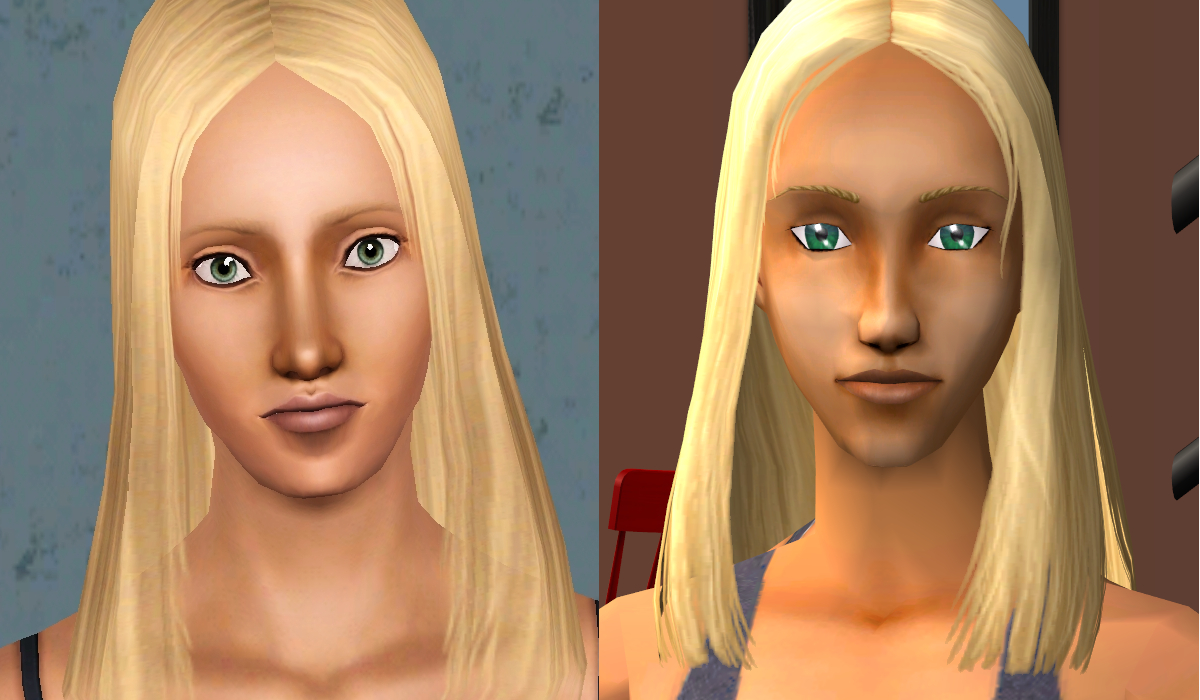 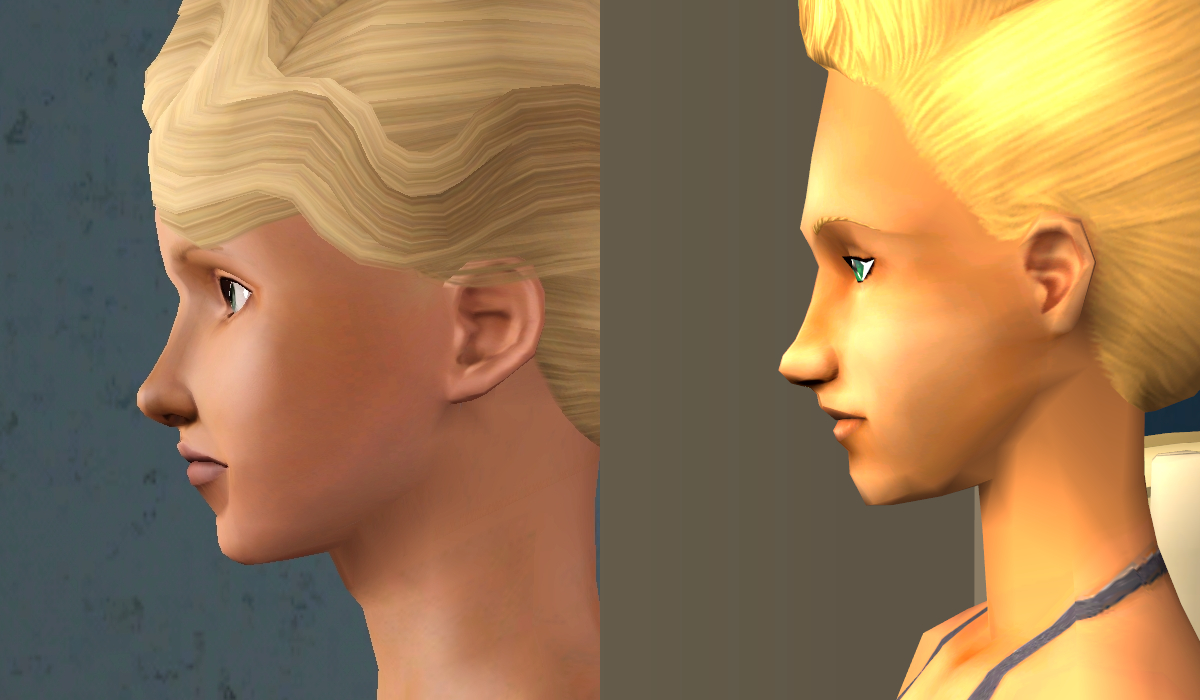 Nina - Smaller chin, made the jaw a tiny bit rounder, narrower eyes. I also made her cheekbones a bit more prominent; It's subtle but I hope it's somewhat visible, because I'm having a hard time modifying cheekbones in this game without making them look deformed in the process :/ 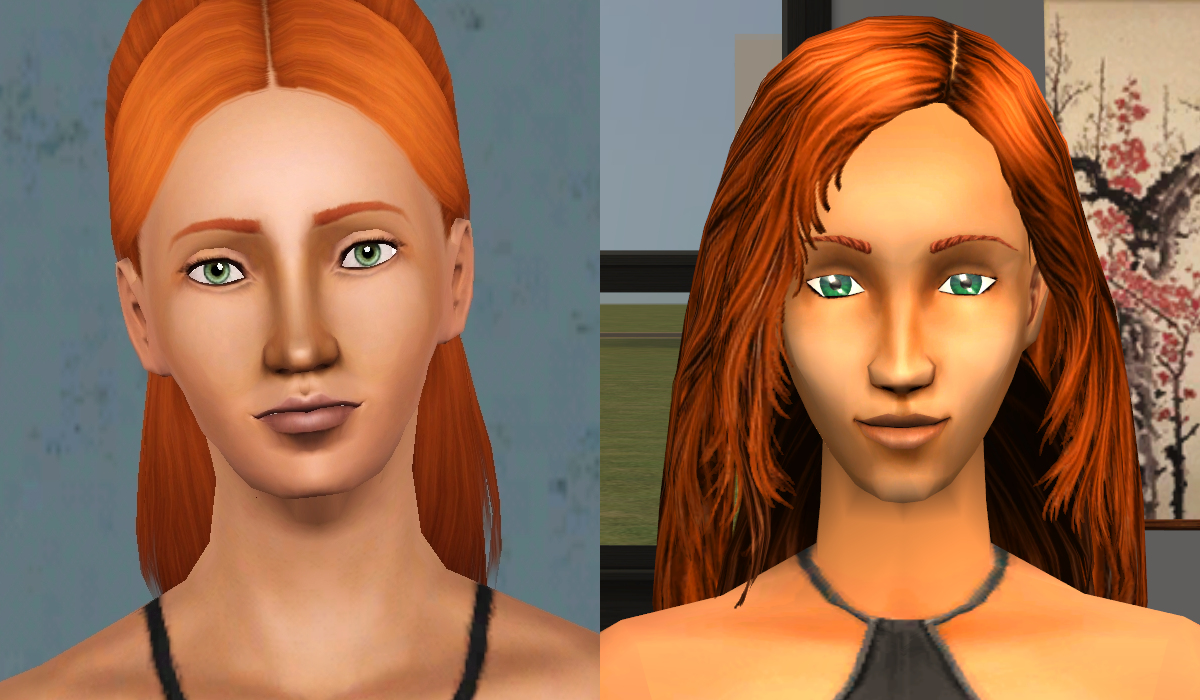 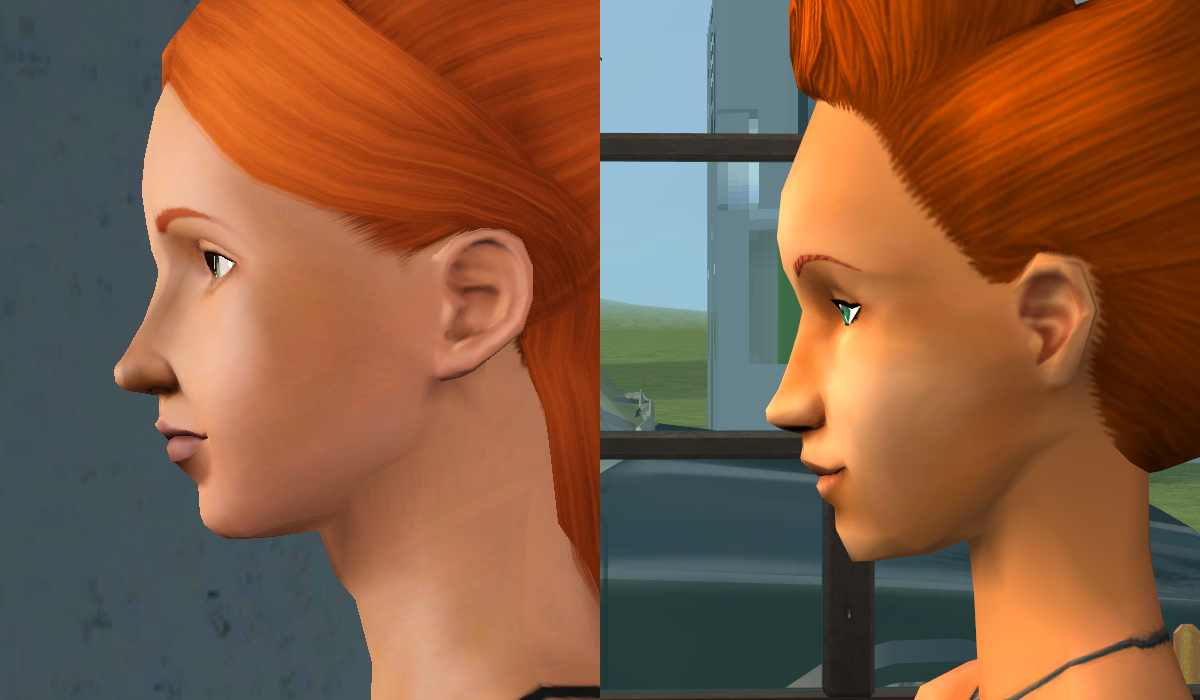 Nice job with the tweaks! With the adjustments to Dina, I'd say she's pretty spot on at this point.

Nina's profile is much closer now as well. I'd say proportionally she's fine now. I notice from the comparison pic that in TS2 Nina's got sort of a semi-permanent smile going on, where the corners of her mouth are raised slightly. As in curved. And I'd raise the mouth itself ever so slightly. I'd also adjust the curve of her forehead slightly, push it back a bit. I think there's a slider for that here on MTS. Last thing, maybe adjust her nostrils slightly upward. In TS2, her septum sticks out a bit at the bottom.

I don't know if you were set on the hair you've chosen for her or not. If so, that's perfectly fine. But I found this one here on MTS that's similar. It's not an exact match, it's slightly shorter and the part is different. But I think it'll make her seem more like Nina as well.

https://modthesims.info/d/420567/sc...conversion.html
You have been chosen. They will come soon.
WatermelonSandal

Changes to Nina:There's probably a few other minor tweaks that I don't remember. 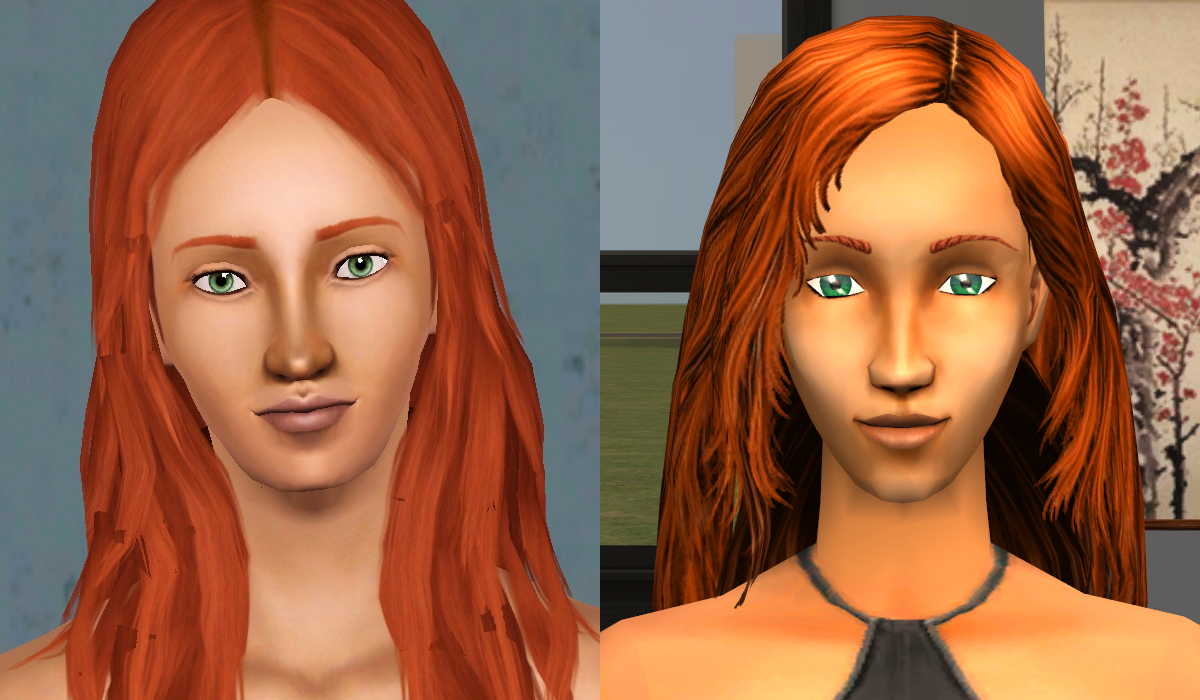 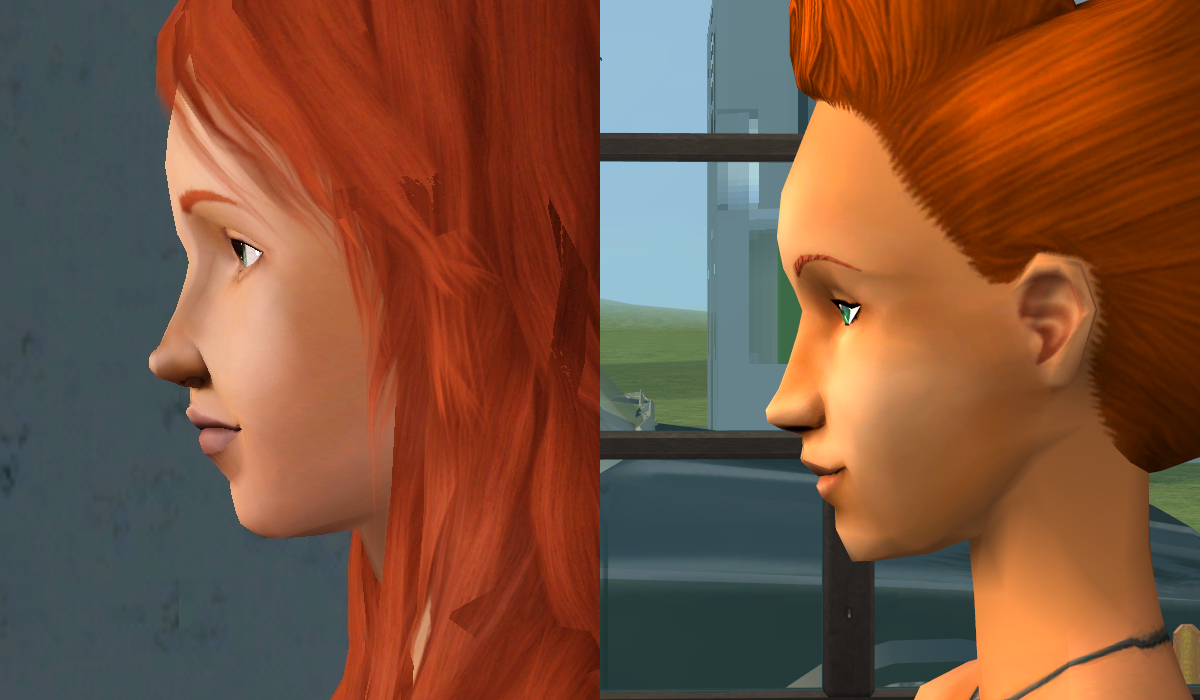 I don't like the hair you linked so I won't be using it. But I think this base game hair is the closest to Nina's TS2 hair so I might use it instead. Still, I'll spend some time looking for CC hair. To anyone who may know similar CC hair: feel free to post it in this thread.


Quote:
That is the hairstyle I'm using for Dina.

Some hairs that may fit Nina:
The Caroline hair from this set
Cazy Revival
Newsea Hello TS4 (I think this matches the most, though it's a little longer than Nina's hair)
4to3 Anto Levitating
Looking for something converted to TS3? Visit Xto3 Conversions Finds for all your xto3 needs.
Main simblr: aisquaredchoco ( ͡° ͜ʖ ͡°)
Jathom95
Forum Resident
#10

Yeah sure, no problem.

I just saw that one and picked it really because it was similar in shape.

Great job with Nina! Very nice improvements.
You have been chosen. They will come soon.
Affinity 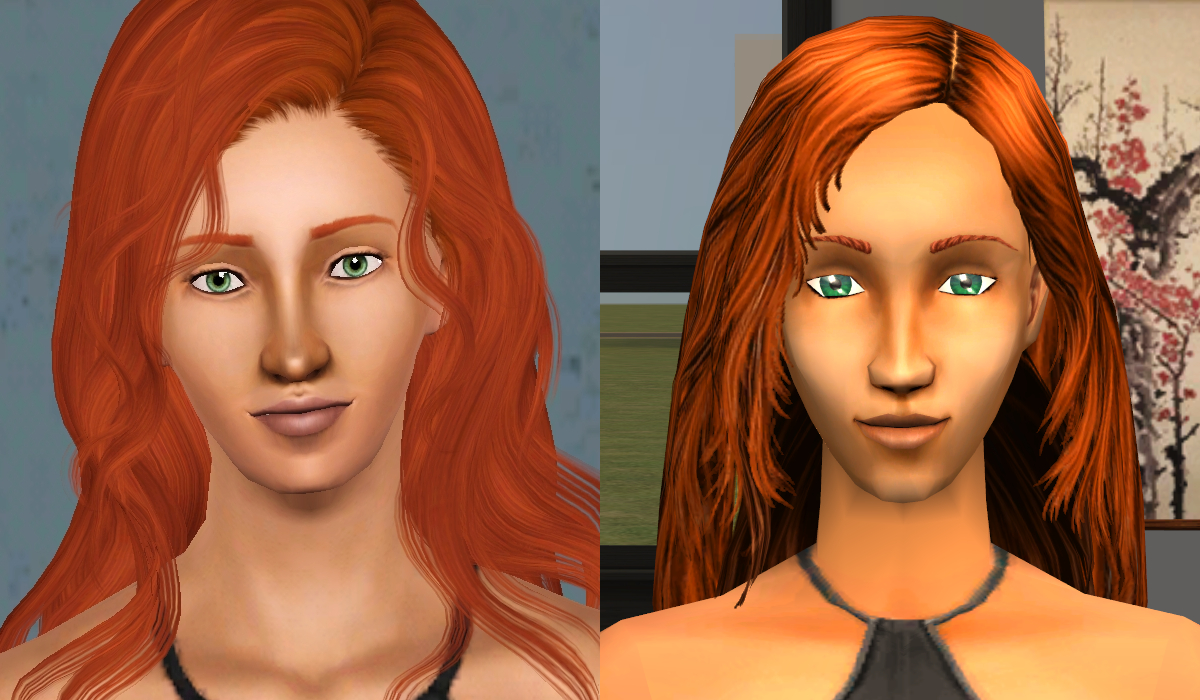 Hello is pretty good. It's a lot longer and thicker than Nina's hair but i guess it kind of fits the style. Let's just pretend Nina let her hair grow out

Thanks a lot!
Mandelyn
Field Researcher
#12

Quote:
As long as it follows the general style, length is usually disregarded. I guess she looks the same now.

I see there is a shadow under the nose. That's a problem that I commonly run into, and I use the Lower Nose Height slider to fix that.
Creator of Shields Road [TS2] - Carrer de Hebra [TS2]
Affinity

Quote:
How do you use the slider, exactly? It seems to be like the nose height slider from the base game.
WatermelonSandal