Bookcases for a library

Bookcases for a library
So, for a while now, I have been running a thought through my mind and then how would I come about making the thought a reality.
Then, I went to another forum and found *coughs* from like april 2018 a comment of what someone wanted for a bookcase at a library in the game.
Their want was very similar to my idea.
Taking a bookcase and emptying it of the books and knick knacks. Filling it up with say just the level 1 skill books and making them stay there until someone wants to read....of course as well as having each skill book give off an aura while the sim is reading the book.
( I plan on building a library and using these items as well as making them available in the above format. As well as having TS3 bookcases and books in the library.)
So, there is a long way to do this in the game, but then the librarian goes crazy, right? Or what if you create a great library and you've removed the books from a bookshelf and then you upload for people to download....doesn't really stay that way now does it?

Well, I know a thing or two about conversions, recoloring, meshing, and the light modding.
How do I make this available without doing a major overhaul that would require major modding work (of which I do not have the knowledge...I would literally screw up my game)?

Well, I thought of two ways...the first is long, tedious, and hard work; oh wait...so is the second way.
(Above includes the debug books and book displays.)
I started working on the second way...just recently.

I could make the debug items buyable and sellable. This will allow the books to be placed on the bookcases as well as every downloader being able to use them...great, but do you know how many displays there are? about 40 and I don't have all of the packs. There are roughly 100+ of sgl books....that's just the debug books. So, that's a lot of well...crap to go through.
As well as deciding on which displays and books give off an aura besides the ones that EA made to do that; food for thought...the aura's are emitted up to 9 big squares away from the item.

Okay, the 2nd way...is to export the display mesh and then re-introduce it by using an object that is similar..

Now, I am leaning toward the second route because I am coming across texture maps for some of the displays with multiple maps but only one swatch...which is weird. So, I will need to do things the second way....this is really no big deal!?

The thing is I don't know if there are enough people playing game who really want this.....so if you do let me know.

If you are a creator and you see another way to do this, let me know that too.

Please keep in mind that I do not have a big load of money to buy all of the packs; therefore, I was going to fill up the shelves with TS3 books in the same genre until I have more packs bought. If someone would like to send me the book files from the packs I do not have....then I can work on that....as i get the packs...I can always update the post of the download for you guys as well. This seems to be a WIP constantly and would need to be updated for every new pack in the future any way.

Let me know what your ideas are
---liulingsims
Advertisement
Victor_tor

I like your idea to revitalise attraction to libraries cause this lot type at sims is prety boring.
Kara making custom books and Alex made a displays to sell books. IDK how it works with custom books, but his food dispay is perfect matching Ice's vegs.
Here you can see more of my creations and conversions for sims 3. ;) I`ll glad to see your comments in.
liu ling sims
Test Subject
Original Poster
#3

Quote:
thank you. I have taken a look at both of those creators items. When I am ready to build the library, I will definitely put their things into it.

Just a heads up--
I am currently working on getting all of the TS3 debug books converted. I have what I need to get the bookcases and the books from those bookcases and get them converted....there is a lot to do.
liu ling sims
Test Subject
Original Poster
#5 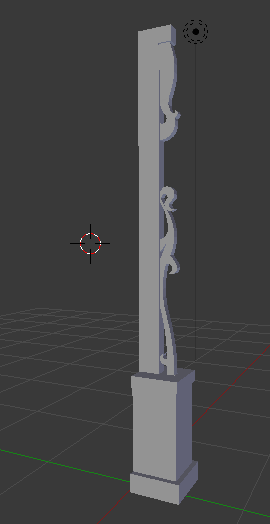 There are edging issues on the walls...there is a purpose for that..part of it is shading for the column. part of the back of the column is empty...so you will know that you can't use the column for any other purpose...it goes flat against the wall.

The only issue we are running into is figuring out how high to make the column...we really don't have anything that is a good reference for it.
As for the difference in the walls...The short walls are meant to be used outside and the Med inside, but we wanted to know what everyone else thought.

Also, we have everything we need to convert the bookcases from TS3 into TS4. We are currently removing items from the bookcases. More deco items and more book items to fill empty bookcases YOUR way. We have a couple of ideas for our own bookcase creation(s) that we are currently working on as well. Then, we are making items strictly for the library...media display, newspaper stands, storage, and a circulation desk....hoping you guys will enjoy our huge undertaking. Hoping to have it completed in a month may be longer depending on how long it takes to get everything built, converted, and no issues in game.
---liulingsims
children of augold's place and goldilockssims
Victor_tor

As a user, as a player. I can say I prefer to use middle height of ceilings.
Fer bookcases I prefer party finished overlook like was made by pbox much time ago. Here is for example: http://www.modthesims.info/d/572779...lf-add-ons.html
Full empty already will look more like a shelfcase.
Regards Vic ^_^
Here you can see more of my creations and conversions for sims 3. ;) I`ll glad to see your comments in.
liu ling sims
Test Subject
Original Poster
#7

Quote:
thank you vic
I still need to do the short and tall walls...I will do them like the medium.
We are making empty bookcases available and some fully stocked...fully stocked most will be deco. Very few bookcases will be like a "normal" bookcase.
Again, thank you for the feedback.
This may take about a month to get everything going. We are doing conversions and have some really cool furniture that we are working on right now...nothing that we have seen before in the game...as far as we know of.
liu ling sims
Test Subject
Original Poster
#8

we have double sided curved bookcase almost completed. low poly count. no books in it. we have some trim to put on the bookcase in blender and then re-work the uvmap so we can color it. Then go into s4s to put slots on it and use something to get it into the game.
With this item you should be able to make a s-curved shape out of two or three of this bookcase, OR you can take three of the cases and put and end of one to the end of the other and then on the opposite of the main case put an end to the other and come up with a partial circle bookcase....
this is exciting for us...it is coming along...

we would show images, but we don not want anyone to be able to create it and say they did it.
You'll have to wait until it is available.
samines
Test Subject
#9

You can edit XML "object tuning" files to alter "valid inventory types" for where an object can be placed (bookshelf? mailbox? trashcan?) and "inventory type" for what kinds of objects can be held (is this a bookshelf? a storage chest? a fridge?). You can also create custom types simply by writing in a matching string for storage-object and an object-to-be-stored: change a fridge to <E n="inventory_type">PRODUCE</E> and add <E>PRODUCE</E> to an apple's "valid_inventory_types" list, and now that fridge-looking-object only works as a root cellar for things you've listed as "produce." (This exact example is tedious if you try to tag all fruits/veggies as "PRODUCE" individually, or if you try to tag all skill-level-1 books as "LIBRARY_HOW_TO" individually, so I assume script mods could be used instead.)

Essentially, create a clone or override (or new object) of a bookshelf that only stores "LIBRARY_HOW_TO" objects, and tag all your skill books as "LIBRARY_HOW_TO" (or whatever you want to call it). I don't know if that would affect interactions that normally only work with bookshelves, like "Grab a Book" or "Put All Books Away," because I'm not sure if that's dependent on the "inventory type" or on something else in the object tuning/interaction tuning/etc.
Back to top