I always forget there's supposed to be vampires in Bridgeport. I had them all disappear when I started playing there regularly.
Speaking of which, is it possible, through MasterController or something, to revert all occults in a world to a human state?
Hypocrisy is only okay if I do it.
( Join my dumb Discord server if you're into the whole procrastination thing. But like, maybe tomorrow. )
igazor

Bridgeport and Moonlight Falls are the only two EA worlds that have pre-made vampire sims. EA's story progression, if allowed to, will convert other sims in other worlds to vamps and other occult states randomly. NRaas SP doesn't do that, but instead allows the player to arrange for occults to immigrate in that way and then possibly breed. Not sure how AwesomeMod's StoryMode handles these, for those who use that instead.

Yes, MC (MC Cheats module) can be used to remove occult states from existing sims. NRaas > MC > (Sim) > Intermediate > Occult:Remove; if run on City Hall, one can filter to all existing occults and remove their occult states in a small number of steps.

Back in Bridgeport, not sure why one would want Vladamir Schlick, Willam Fangmann, Elvira Slayer, Beau Merrrick, etc. as mortals since being vamps is an important part of who they are, but that would be how to arrange it. I think most players who want that level of control over their worlds might be Totally Annihilating all of the pre-mades and bringing in fresh sims to populate these worlds anyway.
igazor
NRaas Industries
AGuyCalledPi

Quote:
I don't see why not, we're all mortal after all. So either they fit in, or they suffer a tragic but entirely, totally accidental death. The problem with Bridgeport is that most of the premades are a bunch of total BORES. So forgettable. For a party-themed world, Bridgeport sure is sexless.
Hypocrisy is only okay if I do it.
( Join my dumb Discord server if you're into the whole procrastination thing. But like, maybe tomorrow. )
Gargoyle Cat
Mad Poster
#29 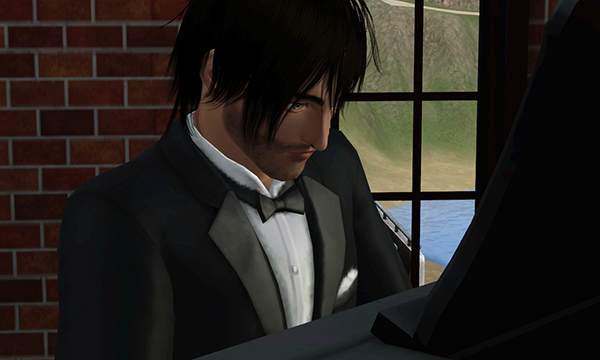 Even though Vlad is a EA pre-made, I always had a tendency to feel bad for him as a vampire due to the traits EA gave him. Vampires are not typically associated with being wimpy. Yes, traits can be easily adjusted, but even after trying to play his household on several occasions as a vampire with different traits, it still didn't feel right, so I made him human. I suppose in some way it was my way of thumbing my nose at EA for claiming that Vlad was a vampire in the first place.

Vlad in my game is one of those sims that I don't have to proverbially 'sit on'. I don't have to give him much direction, I take little issue to what he rolls as wants and he's a joy to play. He isn't high maintenance...

Some trivia about the picture. Once upon a time I was thinking about starting a YouTube channel. I was going to make a video dedicated to Vlad as I've played him over the years. Sometimes I feel bad for putting the whole idea in the trash can, but considering the mess that has become YouTube today, I don't feel that bad. Vlad can dress in a tux and play piano all he wants in my game.

Simgurugraham on the future of the sims 4
﻿﻿EA's strategy, when filling a long-time request for more depth, is to occasionally subvert expectations. - Graham Nardone
Footage Not Representitive of Actual GamePlay
nitromon

I'm having a Mandela Effect (or the Mengele Effect, if you prefer

Ok, well I understand why I wouldn't remember Bridgeport having vampires b/c when I started it, I killed everyone and used porter to port a whole community from my previous save into the town. But I most definitely know the first time I saw vampires was in University. You sure there are no premade vampires in University? Even in the homeless bin?
Sanity is overrated.

I'm pretty sure that as long as you have the required ep and haven't turned off a particular occult state in game settings, EA's story progression will by default create a certain number of occults from the existing sims in any given world. I always end up with ever so many vampires/fairies/etc. from the premades when I play Uni, even if I haven't specifically turned them, and I've verified that they don't by default have an occult.
Raggs Family Legacy (Rags to Riches Challenge) | tumblr | stuff site
nitromon

While we're on the topic, I ran into this a couple of times. I think it is either uni or a custom world. There would be a sim, looks completely normal like any sim. I use edit in cas and in cas, this sim has fairy wings. After I exit cas, she looks normal. Now, I do not have SN, so I was wondering how that can be.
Sanity is overrated.

Quote:
Quote:
How about the Nitromon Effect?

EA worlds do not have occults other than base game (Ghosts) and the occults supported by the EP if it's an EP world (Mermaids for IP, PlantSims for Uni, etc.) among the premades to account for players who do not have the other required EPs. Custom made worlds might be pre-populated with them though, which sounds like the case here.
igazor
NRaas Industries
Orilon

I don't know if its because I have Supernatural but Isla Paradiso as it comes out of the box without me doing anything to it has two playable Ghosts (the Dreggs) and at least one Werewolf (I can't remember everyone in the Scott family is a Werewolf, or just the dad.)
daisylee

I am working on 2 worlds in CAW. Have not seen a fairy show up so far, but have seen quite a few vamps generate. Had one stuck on a houseboat for a while.
nitromon

What I don't understand is, I don't have SN... so how come there are the graphics for the wings in CAS? I suspected that the actual graphics and things needed for fairies are actually coded either in a patch or in some of the other EP, but there's simply a function which disable the users from using them. If that's the case, some modder can simply flip this switch on.

Quote:
Exactly that, some game resources we identify with particular EPs are already in the game and patch files. I wouldn't be able to tell you exactly which ones. Not enough to actually have a playable fairy without SN though, and there would be more to it than switch flipping. Wouldn't be legal, even if it were that simple.
igazor
NRaas Industries
AGuyCalledPi

Quote:
Same reason I had access to a bunch of magic potions before SN even came out.
Hypocrisy is only okay if I do it.
( Join my dumb Discord server if you're into the whole procrastination thing. But like, maybe tomorrow. )
Back to top