Then maybe don't say that you wish creators always to include the EA standard to suit you . That is entitled, no? You do not think of the people who do lot of hard work to erase all ea textures to make their game suit them so why should they be concerned by the ea standard people. Also, You did not answer my question of 'How dare you imply I don't appreciate nraas mods? Where can you even get an assumption like that?' Of course the dicsussion is going to take a bad turn if you behave like that.

@sweetdevil I also don't appreciate you implying that i'm dying on a hill when I am not.
@Leo5 You will be happy to know that sims 3 won't gain anything from i9 or the like it 32bit game, the end. building computer than will run sims 3 with all the mods will cost less than an iphone

btw @nitromon have you seen this about the textute types https://modthesims.info/wiki.php?ti...mpression_Types
I still cannot remember which one you must use for the hair texture to avoid grainy texture, i think it was dtx3. if you use dtx1 or dtx5 the hair will look very ugly in cas and game. I try to open some my old work to check which format i used but i cant find the information anymore. i swear S3PE showed it
Gargoyle Cat
Mad Poster
#27

I personally only download custom content that suits my way of playing. My play style involves zooming in on sims with lots of picture taking, so I only download things that 'fit' into that way of playing.  I hate EA's skins, so I only use ones that are on the higher poly side of things.  If I want a article of clothing that is high poly, I will use it for whatever picture (s) I want to take, then remove it from my game. There is no reason for me to leave it in game when I'm never going to use it again. On the other hand, as a example, I could care less about a couch that may be in the background of a picture, so I use CAST and recolor whatever version of EA's couch that I may be using at that time.

Before I bought my new system 2 years ago, I would fiddle with settings.  I don't need to see a sims reflection in a mirror for regular game play; still don't.  If my sims were near water and there was no picture taking involved, I didn't need the water textures to be clear because it wasn't important.

While this constant messing around with stuff may seem like a royal PITA to some, it allowed me to play on my old system ( the computer I'm posting this from) for a few years with no problems.  I never got a Error 12 or had any of those kinds of issues. I've had times where mods don't play nice with each other, but I've had that problem with my new system as well. My solution was to stop downloading mods that are not necessary. Reading any 'side notes' also helps.

Even with my new system, I don't bog my game down with stuff that it isn't important. I don't need everything to be high poly as that isn't how I play.  I admit that I find it humorous when people insist that everything be high poly and yet they play their game from a far away perspective so high poly doesn't matter in most situations.

As for cc creators posting whether something is high poly or not, I always appreciate this being noted even if I'm only going to use said thing for a few minutes.  If I'm determined to use a specific piece of custom content, I'm going to use it either way, but the mention doesn't hurt anything or anybody.
Jouet
Test Subject
#28

You mean there's a way to minimize some of these massive CC files??? Is there a tutorial to this somewhere? Now, when I do use custom CAS, I make sure it's not Valid for Random in s3pe, so I don't end up with a bunch of Sims running around town with bloated CC. There are other pieces I'd like to use, but am leery of, size-wise. I'd love to know how to "fix" some of them. I'm competent with s3pe, but have never used Blender or anything like that... Still, if there's a decent tutorial, I'd like to give it a shot.

(Just my 2 cents, but if a creator makes something that's for their own personal use, it's completely up to them how they make it. But once they release it for download, they should make clear any of it's shortcomings. Although, it is up to the downloader to vet their CC & hopefully know about potential pitfalls (eg- stacked spawners in CC lots). Having said that, a creator is a little like someone who chooses to own a tiger as a pet... Sure, for them it's just a big kitten, but if they take it to the park they have to realize the tiger might not be so cuddly with anyone else.)
nitromon

Well, this thread is not actually a tutorial... but the general idea is given here from the 1st few posts.

What you need is an image editing software that can modify the image files (_IMG tags) in the .packagefiles. The files are .dds and I believe that is direct draw? Photoshop can do it.

So most CCs (hair and clothes) are typically 1024x1024 DXT5 standards. Some can be shrunken down to 512x512, without losing resolution b/c it may be a smaller item. Others, while need to remain 1024x1024, but can be reduced to DXT1 (1 bit alpha blending). And finally there are certain images that are placeholders or invisible, which we're discussing if can be shrunken down to just 1x1.

So far from my experiments.
- blank img files that are "red" can be shrunken down to at least 8x8 and maybe more to 1x1 and save in DXT1
- blank invisible img files may be able to be shrunken down to the same as the red image, but must be DXT5
- img files with design that has a black background and is typically grey scaled, can be changed to DXT1 but must maintain 1024
- img files with red background and yellow/purple blocks can be reduced to DTX1 but must maintain 1024

In hair, this is all preference, but I shrink them all down to 512x512 b/c of the way hair is, they don't really need that kind of sharpness. I actually can't tell the difference at all when I shrunk them down.

In clothing, most need to be 1024x1024. The size of the clothes doesn't matter as much as the type of clothes. For example, I have a jean short. Thinking it is a small piece, it can be shrunken to 512x512, however this made the texture blurry and the button on the jean which was sharp and clear before became blurry.

On the flip side, there was a full set clothes that takes the whole body, but yet it has very little details, mostly just the 3D mesh design. So in that case, shrinking down to 512x512 made no difference to how it looks.

In general, things like underwear, etc... net stockings, etc... can be shrunken down b/c they do not require the sharpness as normal clothes. I have also tried some jewelries, such as earrings and necklaces. Many can be shrunken down b/c they're so small and do not require 1024x1024. However, again, make backups before you try. There were some jewelries that have very detailed designs and were blurry when the texture was shrunken down.

Now I have never tried it on the furnitures and other items, but the concept should be the same. But it requires a lot more testing.

For people with a lot of CCs, you don't really have to go through all of them, just ones that seems to be huge in file size.
Sanity is overrated.

Coming back with a test using one of my conversions for other ages, the Wrap Gown: HQ preview here.
Compared to the Store version, I sharpened the lace, remade the normal map for more detail, and gave the lace its own channel.
Texture Detail is set to high, Sim Detail is set to Very High, Edge Smoothing is set to High.
No Reshade or other editing, just screenshots from the game. Of course, all pictures taken in game.

For this test I went with a contrasting color scheme of dark blue and red, since red has a tendency to bleed into other colors if it's assigned to small parts on painted-on clothing.
In this particular dress, the specular and mask have been saved as DXT1, and the multiplier and normal map have been saved as DXT5. 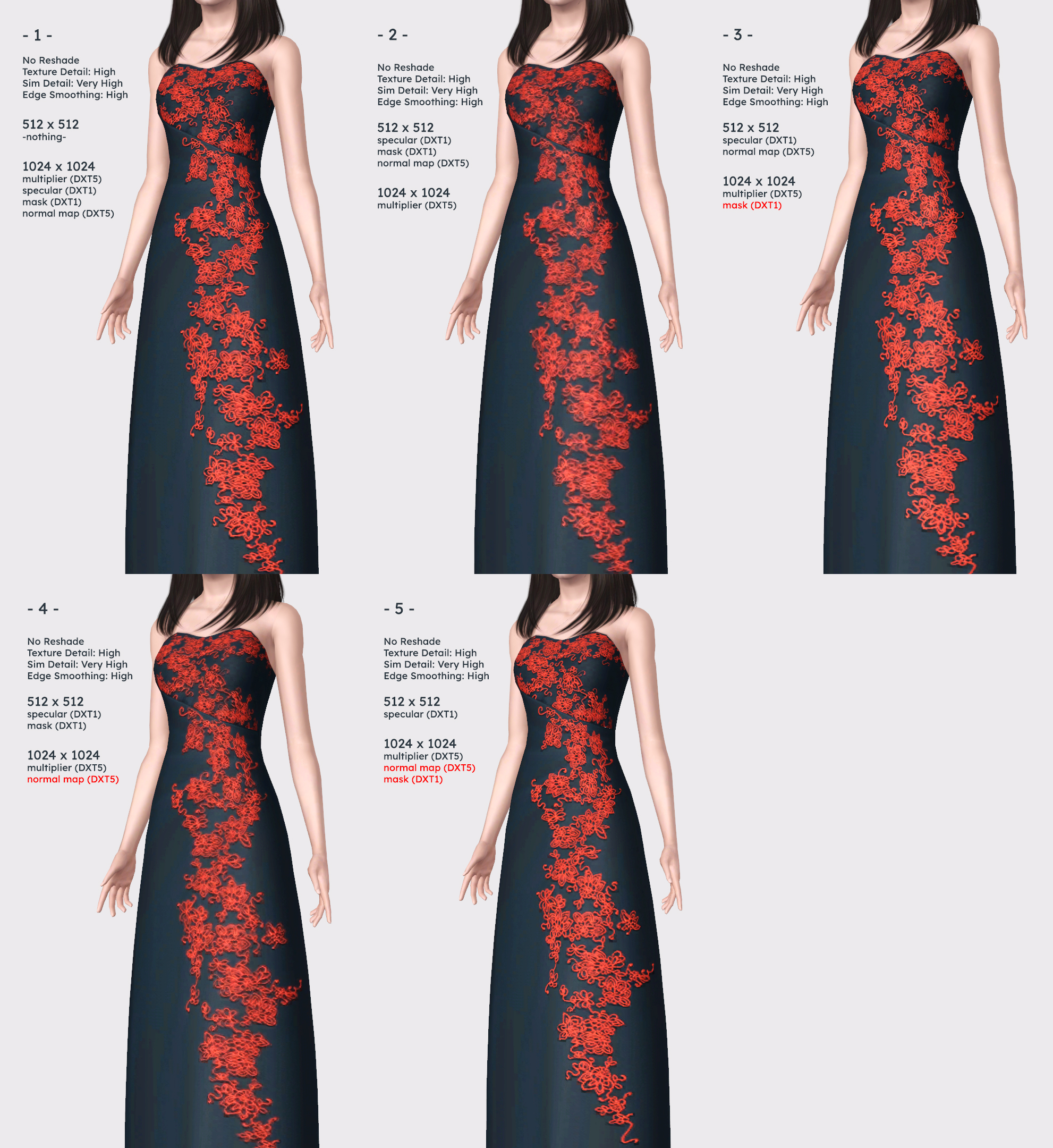 My conclusion: if you must shrink textures, I recommend only shrinking the specular if the clothing item has small details.

Will be doing a test on hair and skin textures later

Thanks that test looks awesome.

2 and 4 are obviously blurry.
Sanity is overrated.

Gimp will do it easily. You just go to image then scale image and type in your desired adjustments. If you have the any version from 2.10.10 dds support is now included, anything older you will need to find a plugin.
Back to top