How to do prepare meal with honey? Hopefully the no pay the fridge mod didn't take away a interaction, because prior I remember it being clear how to go about utilizing honey in such way. My Sim wants to fulfill the wish.
P.S. Sorry for my bad english.
MurderPrincessK

Doesn't honey work like herbs and you add it after you have prepared the meal?
Pretty sure that's how works, not in game to test.
Wren-der Simblr // Sim Art // Pictures // Downloads // Random Nonsensical Rambling
Follow Friendly
Smyrrna
Lab Assistant
#9078

Yes, you add honey to the meal after it is done, but it is only possible for sweet food (dessert section or cake from the store baking station). This is probably why you see the option so rarely. It's called "make it sweeter!" (or something like that). Perhaps it would also work when using honey in a Stu Surprise, but this is very cumbersome when not using the any ingredient mod by icarus_allsortslink
Tacitala
Lab Assistant
#9079

This may be a little late (fortunately that wish pops up fairly frequently). As Smyrrna said, the main way to use honey is to take a dessert and sweeten it up (which may or may not increase its quality but it will give the meal a small positive moodlet when eaten). Honey can be stored in the fridge however to sweeten up a meal, you need to have the honey in your inventory.

There is only one recipe actually made with honey: firecracker shrimp/tofu (a level 5 meal if I remember right that takes a hot pepper and a jar of honey). That carries the risk like all of the hot pepper dishes: sims might get a negative moodlet- or even catch on fire- especially if the pepper used is low quality or if the meal comes out low quality (which is why I usually skip learning the pepper dishes).
HarVee

Quote:
Yes to all of them. In my game plumbots are slaves to their humans for they [the plumbots] are computers. I type this on my rl slave, err "computer".
My Soundcloud, where I upload some things I make.
igazor

Well think of this this way, most dishwashers are computers. Coffee makers have computer components in them. If my coffee maker becomes a slave to my dishwasher I'll let you know.

My Soundcloud, where I upload some things I make.
BlackjackGabbiani

Hold up, what expansion is this that gives hot pepper dishes that can catch someone on fire?
MurderPrincessK

Is there anyway I can buy City Hall? I wanna own it. Because I am mayor.
My Soundcloud, where I upload some things I make.
igazor

Quote:
No, municipal lots cannot be owned as they are public and not intended to be private property. But if you want you could make a different kind of lot, a bar or lounge maybe, and call it "City Hall"? Am unsure what would happen if you then put in a City Hall rabbithole rug on such a lot someplace after acquiring it, that might be worth trying.

I don't think that would work. As an example, I made a casino in Twinbrook for the Rackets, and then put in the Criminal Warehouse rabbit hole - wasn't able to purchase it after nor before, oddly enough.

But then again, I might have done something wrong. Wouldn't be the first time, LOL.
Dead Ringers
Discord: RedBaroness13
HarVee

Quote:
Yet I can buy the hospital... weird EA Logic.

My Soundcloud, where I upload some things I make.
MurderPrincessK

Quote:
Many hospitals, here in the US anyway, are private businesses intended to make a profit. Some are nonprofits (thus run by a board of directors, not an owner) and just under half of them are public entities funded and run by the government. So that one isn't as strange as it might look.

How can I get my sims to look straight ahead, they're heads are always tilted when I take pictures?
mithrak_nl
Scholar
#9092

What part of the game makes sims send your sim gifts through mail? I would like to search for a mod that can turn this off or at least exclude the expensive gifts, but I don't know what to look for. My sims are getting rich too soon because of 3000$ paintings :p
MurderPrincessK

Quote:
That's the mod I use. I find the entire attraction calls and gifts in the mail scenarios that the Seasons patch added to be ridiculous because of how random they are and I think many other players feel the same way. If my sim has truly done something generous, kind, or noteworthy, then yes I would allow someone to send them a gift to express their appreciation or affection but unfortunately it never seems to work quite that way.
igazor
NRaas Industries
mithrak_nl
Scholar
#9095

Thank you!. I used the version that disabled all letters and calls.

I just realised that I was ignoring those phonecalls already, because I always silence the phones on my sims. I was ok with using the very cheap plants and posters that I received as gifts, but the expensive paintings spoiled my slow improving of the lot they live on.
Deshong

Shift-click on Sim and there will be an option that reads "Turn off Look At's" or something along those lines.
Because I'm Fragile...but I'm not "that" fragile.
HarVee

Why does every custom default replacement eyes have to have this shine drawn into the texture itself instead of having black pupils and letting the games default eye shader do the shine? It's irritating. So many good eyes get destroyed with this false eye shine.
My Soundcloud, where I upload some things I make.
LittleCheshire

Can you give a visual example? I feel like I know what you're talking about but I'm still unsure.
Oh c'mon. There better be a point to all this stress I'm under.
HarVee

Quote:
Let me use BurntWaffle's Ephemera MS93 eyes as an example. In the image below you can see on the buttom left, and on the right, that the shine (white spots) are drawn into the texture itself. This causes the eye shine to move with the eyes themeselves instead of being a natural glare from the lighting, so basically you will always have a shine in the same spot in the eyes regardless of where your sim is looking and where the camera is positioned. 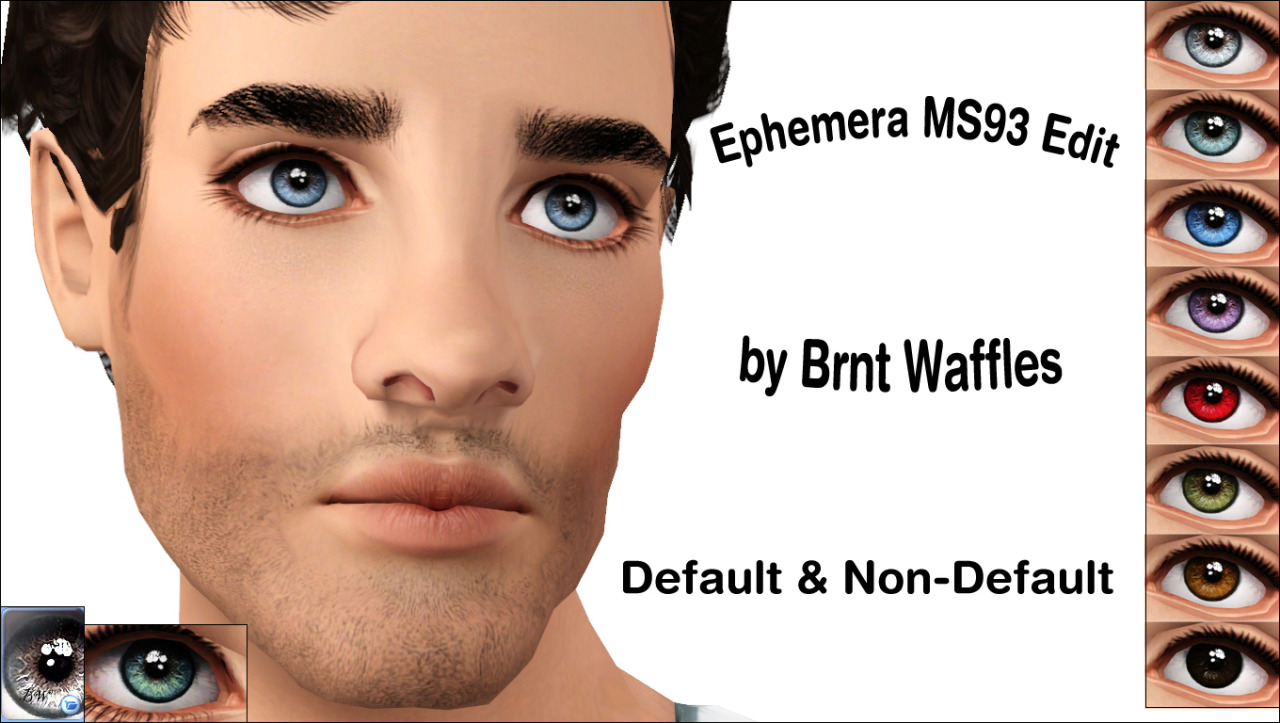 Now we take one of my Sims using the default EA eyes. Below we can see that the pupil is completely black and that depending on where the sim is the shine changes direction which looks much more natural.
My Soundcloud, where I upload some things I make.
Deshong

I don't remember, is there a wish that deals specifically with wanting to cheat whether romantic interests, partner or spouse? I'm curious if such a wish exists. I remember a couple of my Sims who are married getting a wish to kiss another Sim, but wondered if there was actually a wish to cheat on a significant other. If so does it come from base game, Generations, Seasons, etc?

Also, I'm curious about the requirements in order for Sims to roll certain wishes such as break up. I have two Sims who are boyfriend/girlfriend with one infant and they just autonomously tried for another baby successfully. Still not sure which one initiated that. Thing is, the girlfriend has a wish to get married but so far the boyfriend has not rolled this wish. Since I don't play with story progression I manage all my Sims relationships depending on their wishes and behavior and prefer both Sims to have a wish to get married so I know both are in agreement. In fact, when I sent him to an indoor neighborhood pool he started autonomously flirting with a married woman in front of others. Perhaps he would rather feel better if she breaks up with him than the other way around? There have been other signs as well that he seems not invested into his relationship and maybe the reason there's no wish that comes up to break up is because their long-term relationship is in good standing or he doesn't want to be the one to end it.
Because I'm Fragile...but I'm not "that" fragile.
Back to top