Gameplay - Tell us about your World(s)?

Tell us about your World(s)?
This is open for interpretation. To help on a head start?

What's happening at this current time? What's the history? Any news? What are residents that inhabit? Inspiration from? Political/Economic Status? Geography? Interesting facts? Interesting sights? Authentic lots? Write an encyclopedic-guide article about it If you want

At the moment, I'm just starting out with this game. Playing Bridgeport and Twinbrook at the moment. I probably won't be changing much, but I might enable story progression and retell the resident stories (although, doesn't seem to be appriopate to my own thread I'm questioning this) by updating it all in my comments. Though I'm tempting to start my own or download a new map, just llike I dis with TS2.
P.S. Sorry for my bad english.
Advertisement
nitromon

Hmm... not much going on in my Riverview except the periodic elder culling of Logan's Run to reduce population.
Sanity is overrated.

What's happening? Shenanigans. Bribery, breaking each others stuff, being bullies, and behaving badly in general.

History of Grey Meadow can be found here .

I don't have any news to report, really. Playables and non-playables are busy when they're not misbehaving. Low income sims are changing their economic status through working and skilling. Middle and upper-class sims are becoming partners and or buying businesses and dabbling with being landlords. I need to create new castes so I can adjust weekly tax brackets. It is on the To-Do List. The Foxtrots ( and others) can afford to fork over more than 1%.

I've been tossing around the idea of adding a mayor or some other political head to my game. Some days it sounds like a good idea, some days it doesn't. I don't want a political system in my game that aligns with any type of real world politics. If I'm going to do it, it has to stay within the context of the hood itself. If anybody has any thoughts on how to accomplish this, I'm all ears.

The history of Grey Meadow is dark and grim, but in my game it is starting to run like a well oiled-machine. It was a goal I didn't know I had until I started to see it happen. I'll take those kinds of accidents any day.

﻿~ You need StarWars TRADEMARK Journey to Baboo for My First Pet Stuff because your hamster can be a Jedi~
I stole this line from a YT video comment. Cheers to the person that said it.
AGuyCalledPi

What is there to tell, that hasn't yet been told? I'm still in Bridgeport. I'm not leaving anytime soon, either, because I have an informal commitment to the damn hellhole. I'm the guy responsible for turning the sad little Sim cesspool that is Bridgeport into a living, thriving, throbbing metropolis of about 2 million. And while I can honestly say that I've been doing an okay job so far, I've only really just gotten started. The real Bridgeport will span about 4 Sim worlds, each filled with some 100-150 custom Sims, and maybe a dozen lots each. Over a span of 4 months I can expect to create 2 new lots, 2 new objects and about 25 new Sims, so do the math.

I haven't yet gone out of my way to try to tie it all together but I have a good idea of all the relevant history, geography and culture. I can point it out on a map, I can tell you what the tallest buildings are and when they were built. I can tell you the city's baseball team, the year it was founded, what the best way is to get from Westumberland & E. Carlisle Av. to the turnoff for Bogaard at Wellinger Drive......namely, you get on the C-Line train at Mill Bank Plaza and transfer onto the D-Line across the bay, where you get off and walk for roughly 5 minutes along the busy Wellinger. But only after 1989, because there wasn't a crossbay subway line until then. So I guess you'll just have to take a bus if you're in the '88 version.

I tried to build the place in Cities: Skylines once but a general lack of skill kind of beached the whole effort. Few screenshots remain. 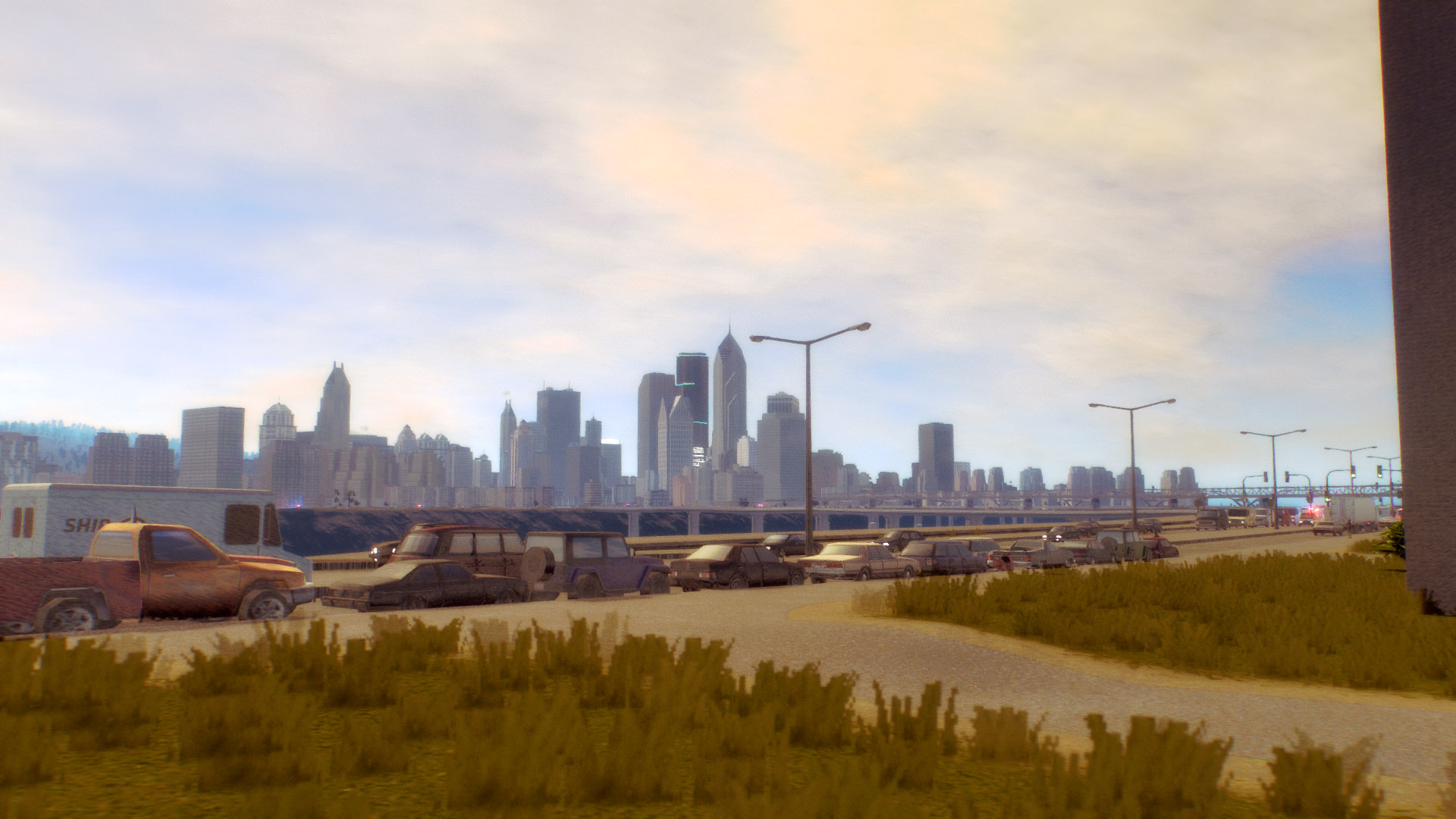 I'd post some more material, but I don't want to be spoiling my present efforts. I'm doing a bit of work here and there, first and foremost in TS3 itself, and it's coming along nicely. With a bit of luck it'll look like Cities: Skylines anyway.
I mean, what's Bridgeport anyway? What specifically is Bridgeport as of the late 1980s? It's big business, it's rush hour, it's graffiti, it's gritty alleyways and rampant substance abuse on all levels of the socio-economic scale. It's people in Italian suits and luxury sedans on one end, hauling around briefcases and portable telephones, and it's the "inner city" on the other. Living out on the street, getting in trouble, listening to hiphop and making a scene. An art scene, a breakdancing scene, an underground rap scene, a house music scene, or maybe just a wholesome suburban Americana scene. Maybe you should watch this cheesy 1987 documentary for a watered-down, PG-13 answer to what the hell is going on in my worlds. Consider these factors and how one would attempt to translate them into The Sims.
Hypocrisy is only okay if I do it.
( Join my dumb Discord server if you're into the whole procrastination thing. But like, maybe tomorrow. )
SneakyWingPhoenix

How's the crime in your bridgeport? Is it swirling in police sirens?
P.S. Sorry for my bad english.
AGuyCalledPi

I don't really pay it any attention. Regular crime levels I guess? It's a major city anno the 1980s, so there's going to be more crime than we're used to, but it's still a non-issue. There's drugs being sold here, people being shot there. Nothing out of the ordinary.
Hypocrisy is only okay if I do it.
( Join my dumb Discord server if you're into the whole procrastination thing. But like, maybe tomorrow. )
Wojtek
Instructor
DELETED POST
4th Sep 2018 at 10:49 PM Last edited by Wojtek : 4th Sep 2018 at 11:43 PM.

This message has been deleted by Wojtek.
Gargoyle Cat
Mad Poster
#7

@SneakyWingPhoenix I have NRAAS SP Meanies in my game. It works there because Grey Meadow is gritty with corruption, ect... If you want thugs and such where you don't have to do anything, that is where I'd start. SP Meanies is a add-on to NRAAS Story Progression. You can't use one without the other.

https://nraas.wikispaces.com/StoryP...%20Interactions
﻿~ You need StarWars TRADEMARK Journey to Baboo for My First Pet Stuff because your hamster can be a Jedi~
I stole this line from a YT video comment. Cheers to the person that said it.
SneakyWingPhoenix

This message has been deleted by Wojtek.
peno
Lab Assistant
#9

This message has been deleted by Wojtek.
SneakyWingPhoenix

I'm Lithuanian and would love If that language was available to choose for my game.
P.S. Sorry for my bad english.
Wojtek
Instructor
DELETED POST
5th Sep 2018 at 11:51 PM

This message has been deleted by Wojtek.
lakme
Forum Resident
#11

I downloaded Newark Banks (http://one-plumbbob.tumblr.com/post...ld-overview-and) and am playing it as a New England coastal town that I'm calling Averford Island. It has more rich people who don't do anything than working class.

I think my "old Hollywood / LA" savegame town is completed in the midtown section... mostly thanks to jje1000's Boroughsburg buydebug filler deco townhouses, which are, true, made for the East Coast, but some of them fit nicely to the West Coast, too. Aroundthesims3's decorative high-rises set is a great help, too. Now I look around and when I realize that now it's time to arrange the Pacific seashore line and "Beverly Hills" too, I just moan with despair, I can't imagine to spend time with grinding Spanish revival celebrity villas and bungalow courts for the script writer folks. I think I just stay in downtown and continue with my humble bartender mixologist girls and service garage men who only dream about moving into celebrity mansions.

Evermore Falls is a new colonial settlement in what is now Maine started in 1635 with the Jankowsky family and later on the I vanovitch family arrived in the fall of that year and they've been suriving there with expansions on their homes though it's now late spring in the year of 1637 and they've been getting some dry weather lately which might turn into a drought if it continues.The Ivanovitch family is currently finding they've begun to outgrow their currentl home and will have to move to their other lot soon as it's a larger lot.
TadOlson's Blog
CatMuto

My current world is Buildersville because it's one of the few, nice custom worlds I can find that don't require majority of EPs to play. I have the season set to only Spring, so I am aiming to make the houses and public places with more flowers and trees than I usually do, but always have to make sure to have an 'inside' spot as well. Just in case snow appears and staying outside is too cold. I have no real 'theme' or 'era' in mind.
tizerist

Quote:
Holy cow....I did not know about this hood! Why was this not more widely covered??
#BlairWitchPetition
TS3 NEEDS: TENNIS COURTS > BUSES > PIGS/SHEEP
Can't find stuff in build and buy mode? http://www.nexusmods.com/thesims3/mods/1/?
AGuyCalledPi

It was pretty widely covered, at least in my circles.
Hypocrisy is only okay if I do it.
( Join my dumb Discord server if you're into the whole procrastination thing. But like, maybe tomorrow. )
plantladysimmer
Test Subject
#17

Hey, do you have the file for this world? Looks like the download link doesn't work anymore