Radiance De Silva went clubbing at The Grind, and I think she really loves table dancing!:

This message has been deleted by Wojtek. Reason: No pain no gain
shiggityshwa

My sims Mina doing a horrible job at being a Mixologist:

Doesn't help that she's pregnant and actually went into labor at the bar.
Shut up, Quadratic Equation!
My Sims Livejournal
Wojtek
Instructor
DELETED POST
31st Oct 2010 at 1:41 AM Last edited by Wojtek : 20th Oct 2011 at 10:31 PM.

This message has been deleted by Wojtek. Reason: No pain no gain
fragglerocks My sim hannah dancing on a table after having too much to drink.

I'm using small enough pictures but for some reason this forum tells me their too big. It's resized to large on photobucket so go figure.
kampffenhoff
Forum Resident
#55

Here are three pics of Bridgeport.

Eleavator woohoo! I love the dirty look they give eachother...

Updated my nightclub, Blue Rose with some Late Night effects.

Paparazzi! Or is it paparazzo?

This message has been deleted by Wojtek. Reason: No pain no gain
AnnieBonnie

Some pictures that others havent shared hopefully:

Who designed these shoes?! =_=

The make a move interaction. No one has took these yet so I decided to.
http://forum.thesims3.com/jforum/posts/list/288102.page
Pictures are in the link.
brtaylor2000
Lab Assistant

My makeover of The Prosper Room in Bridgeport I'm thinking this EP might be the best in a very long time. I LOOOOVE IT.

Here's some sneaky paparazzi/vampire chick. Judging from her grin, she's getting paid a lot.

Heehee... I bet I know what he's looking at.

Anita is all like "seriously... she had to wear THAT bathing suit?"
TummyZa

I went to the bar and I find the other me... I mean "him" as a bartender , serving me a drink.
I have fresh install and no-backup savegame except savesims bin and I created him only once.
WTH!

@TummyZa Can you blame the game for wanting more sexy?
x0Chelss0x

Some pictures I took while testing out Late Night.

I also have a vampire sim but for some reason her skin colour didn't go pale, and neither did any other vampire's. I don't know why but if someone knows, PM me please? :D
carlydunham
Forum Resident

this is really random picture but its alexanders birth announcement i posted him in the toddlers thread lol i love the announcement he was 7lbs 5!!!! Mynx dancing on a counter.

I like her seductive pose before the elevator woohoo:

Biting through.. the sleeve? Okay, whatever floats your boat, I guess.

This is the first sim I made for LN but I'm still playing her blood line. Here she is getting married:

Unfortunately the bridesmaid stripped to her cossie and passed out at the ceremony....

...and followed that up by boo-ing the bride at the reception

Here's her son all grown up instigating a bar brawl because the other guy got him kicked out of a VIP lounge:

Somehow the rubble left behind after the fight inlcudes 2 trainers, a high heel(!!) and a lottery ticket

It's all in the name of rock n roll though. This is his band, The Purple Pukes (I guess I had puke on my mind because of all the sim puking). The other guy was dressed in purple until he aged up

Edit: hmmm....I cropped these in photobucket so they were all framed nicely but for some reason most have come out full size....think I'll stick to doin it the long way in future, at least it works 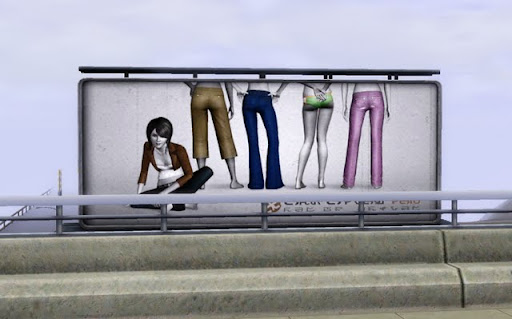 I just saw this! I love it. It's so city-like.
NergoElleSims3
ll
Lab Assistant

Nadine dancing on the counter.