There are also 0 guests viewing too.

Quote:
Today I moved Gill and her mum (who is called Liana) into the same Changing Hut in Monopolis, that Willie Worth had just left. First thing I tried was saving and quitting that lot and going back into it. Gill was still there, so at least she doesn't disappear from her own lot.

(That's a big relief, because I'd fear for the whole neighbourhood if she did disappear!) I then moved another pair of Sims into the Changing Hut near the bridge in Veronaville. The Sims concerned are two Romance adults: Bertha Maxwell and Fiona McKeown. I actually didn't mean to save them to the game, but, when leaving CAS I accidentally clicked on the tick rather than the cross! Well they're in the game now, so they'll stay. (Psst! Please don't tell them that they're a mistake!) Well, once I'd got them moved in, I teleported Gill Cuthbert in to see what happened. Once again I saved and quit to the neighbourhood. When I reopened the lot, Gill was still there!! I've repeated the procedure several times, and Gill is always still there. It seems that, whatever was ailing her before, she seems to be cured now! 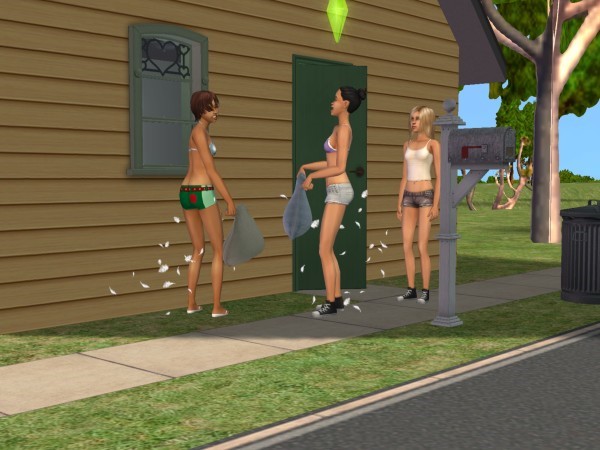 Gill Cuthbert is still there on Bertha and Fiona's lot after quitting to neighbourhood and re-entering lot. Left to right: Fiona McKeown, Bertha Maxwell and Gill Cuthbert

All Sims are beautiful -- even the ugly ones.
My Simblr ~~ My LJ
Sims' lives matter!
The Veronaville kids are alright.
simsample

Oh good @AndrewGloria No idea what that was, but it's all good now!

If non-selectable sims are made pregnant, they'll show with the full belly showing whenever they pop up on lots (doesn't seem to matter which stage they're in, at least in my game - or maybe I've only had pregnant sims in the last trimester show up unannounced, I don't know...

No births unless the sim is made selectable, and most likely also a part of the family (there's a difference between just selectable and added to family). Doesn't matter which lot the sim is on - fathers, community lot, etc. - they won't start giving birth unless it's on their home lot, or whatever they consider their home lot at the time if you use cheats/mods to set it as their current home lot.

I think there's a few mods that go around this (Chris Hatch's hospital mod would be one), but difficult to say if you don't know which one you have.

Also, who really knows what they downloaded upwards of 14 years ago? I certainly don't (I've found I've got mods I didn't know I had, and probably a few I don't know what are for - but fortunately they seem to work fine together, so I think if they suddenly started making a fuss it would be something new I'd put in. I do know what most of them do, though, since most have logical names)

Keep notes, or put the readme in your downloads folder next to them, name subfolders after creators/sites. Binary search should be more of a last resort, since it takes a very long time, even longer if you have a lot of CC, and it also doesn't work at all in certain circumstances (such as if you can't reliably reproduce the error).
AndrewGloria

I have a text file called modlog.txt, and I record every mod I put in or take out in it.

Because I'm human, and therefore fallible.

All Sims are beautiful -- even the ugly ones.
My Simblr ~~ My LJ
Sims' lives matter!
The Veronaville kids are alright.
Peni Griffin

Yeah, some of us just do not have orderly minds.
Ugly is in the heart of the beholder.
(My simblr isSim Media Res . Widespot,Widespot RFD: The Subhood, and Land Grant University are all available here. In case you care.)
kestrellyn
Theorist

You don't have to be infallible. If you mess up, that's what binary search and other troubleshooting steps are for. But you should at least try to keep track of your mods, especially big ones like the one that person was using, and it's completely senseless to ask random people on MTS how a mod you installed is supposed to work unless it's something extremely commonly used.
Debby1957
Theorist
#28833

Thank you. You answered the orinal question. (post # 28775- I have a quick stupid question. If a maid's client gets her pregnant, is she pregnant even at other client's houses?) Years ago, I downloaded a lot from Chris Hatch'. I probably have the mod you are talking about. I'll look in my Chris Hatch folder.
Apparently, kestrellyn was the only one offended by my question., because the rest of y'all have been so kind. I hope kestrellyn gets over it or dies with it on their mind.
kestrellyn
Theorist

I'm not offended, lol, I'm just saying that if you don't actually read the description of mods you install, then you don't know what's in your game or how any of it works, and that's a recipe for disaster. I'm sorry your so offended by this simple piece of common sense.
simmer22

^ There's a difference between reading the description on a mod you put in your game very recently, versus having read a description of a mod some 8-10+ years back (where the site now is down, or the mod name doesn't tell you anything much about where you got it from or what it does, or you may not have been as careful to have saved the info for the mod somewhere, or if something old that used to work just fine starts causing a random issue because the load order was changed, or any other issue that can happen with old mods).

I've operated with much the same Downloads folder I've had since 2007/08-ish, with a bit of reorganization and moving in/out here and there, and I wasn't that good the first couple or so years at keeping track of every mod or download (a lot of my mods are from around 08/10-ish). I'm in the middle of a full reorganization process, and I've come across several things I don't know what is, and a few mods I thought sounded useful and went to download but found I already had when I saw the name of the file. Still, my CC has been relatively stable apart from a few solvable issues.

Yes, it's of course important to read about stuff before you put it into the game, but when it's something old you've already had for ages, you don't always have that option. So just chill a bit - not everyone is 100% up to date on every single file they've ever put into their downloads folder, not even the ones who've been in the game almost since the start (me included

I think most of those who have played for a while have at some point used (or maybe still use) the available guides, and know at least some ways to find problem content. The guides are there as a help to newer players, too.
My site - TS2 baby stuff - ToU

I can not comprehend why you are so worried about someone elses game. If you read my post # 2882, you just might understand why I don't remember some silly mod for some silly game. I have more important things on my mind.
kestrellyn
Theorist

Because when you mess your game up, other people have to help you fix it, possibly the same modder whose description of the mod you chose not to read. But maybe you're right. Maybe we shouldn't care about anyone else's game. Great, let's take down all information we have about corruption, all the guides for the how to use the lot debugger, all the critical fix mods, all the advice and knowledge the fandom has built up over the years, because someone finds that advice to be oppressive. Sounds like a great plan.
Debby1957
Theorist
#28838

[QUOTE=kestrellyn]Because when you mess your game up, other people have to help you fix it, possibly the same modder whose description of the mod you chose not to read. But maybe you're right. Maybe we shouldn't care about anyone else's game. Great, let's take down all information we have about corruption, all the guides for the how to use the lot debugger, all the critical fix mods, all the advice and knowledge the fandom has built up over the years, because someone finds that advice to be oppressive. Sounds like a great plan.[/QUOTE

I never asked for HELP. All I asked was a STUPID question. And to tell you the truth, you are the LAST person I want help from. If I have a problem with my game, it is usually my computer with the problem, NOT my game. The last time I had trouble with Sims 2 was 10 years ago and that was because my computer was going out. I bought a new, at the time and my game has RUN smoothly every since. If you can NOT tell the difference between a STUPID question and HELP, you are the one who needs help. I do NOT live and breathe Sims 2 like you do. I have a life. Sims 2 is just a STRESS release for me. I'm done talking to you. Have a nice life.
simsample

usually they will fart at when they get up from the dinner table when most times in my game there is still food left on the table.
My personal radio station link in first post (commercial free and all music) listen with Firefox enjoy, this is a gift
me on Facebook https://www.facebook.com/TheAngelClassicRocKMix
Tashiketh

Jeebus H Christmas people, quit bitching at each other or I will have to start handing out warnings. Be nice to each other, and if you feel you have to post in anger... DONT. Go drink a nice cup of chai and calm down.

Story books are full of fairy tales, of Kings and Queens, and the bluest skies.
simsample

Quote:
Sim Sample farts a LOT, and he has zero neat points. I don't think it's anything to do with the food, but just to do with how sloppy the sim is.
I will choose a path that's clear- I will choose free will
-RUSH- -RADIO- -RADIO- -ARCHIVES-
Simpeople and Me Archive- -11Dots Archive- My Sims World Archive
Khal Ulti

Hi everyone! Is there an easy way to fix the inconsistent shadows of lot imposters when you build a building but then change its orientation from one street to another? I mean, how do you edit the direction of the shadows in neighborhood view so that they all are consistently in the same direction?
Back to top