Up for testing: Adult female alphaskirt
I created a alphaskirt for the adult female(bottom) and hope i did everything correct.
The package itself is also a experiment as it contains 2 outfits, each with 4 diffrent skirts merged into one dbc file.
Spend a full week on the mesh and textures and hope its good enough to upload.

I would like to now:
*How it displays on diffrent videocards as the inside layer of the skirt is a test.
*How the textures look ingame(i am on a very old comp and was a bit dissapointed)
*the bottom and skirt will clip at some points, i prolly have to revisit the mesh but i would like to know if it gets worse using custom sliders/difrent morphs.
*How the pregnant shape looks and acts.
*Forgot to check how the mesh looks at far distance.
*Let me know wat you think(after testing it)

*Screenshots would be nice.
thank you!

Issues,
There are some glitches on the waist were the bottom meets the top, no idea how to fix those(normals and verts are correct)
The skirt is scaled down a little so patterns used on it will appear slightly stretched compared to the tops.
There are small lightning/shadow issues when in CAS but not ingame.(its how CAS displays the inside layer of the skirt.)
I normally would have remapped the inside layer on a difrent spot on the uvmap, but there is simply no room for it....
The panties on a few skirts are not visible, you need the party animal animation(found in sims character) to check them when recoloring.
Every skirt has 4 recolor options.


Plz, dont bug me with with shoe textures appearing on the skirt, the skirt is uvmapped correctly.
Blame the shoe creators

Extract the file in your packages folder.

A few pictures to give you a idea.(4 of 8)
Advertisement
Momodoll

Holy fudge base! The fact that you made an alpha skirt alone is cause for congratulations! Really impressive, I'm so excited for more cas possibilities now.

What is an alphaskirt, may I ask? xD; I mean, how is it different?
BloomsBase

The mesh contains a extra layer wrapped arround the nude bottom.
That layer can be edited by a texture file.
Gives you a more realistic outfit as you have a upskirt look

Made many for the sims 2, had to wait a year before i could pull it off for the sims 3...
You have the idea your looking at 8 diffrent skirts but they all share one and the same mesh.(well, actual 2 but they are duplicates, still need to figure out how to delete all the duplicate files in the package)
emhpb

A final product would actually be 2 skirts? Or does it allow you to put 2 skirts together in-game?
Momodoll

It looks really great, Base. Other than the bit at the bottom of each of the skirt the texture's appear really crisp, they just get a little pixelated at the very bottom edge (I noticed an alphaskirt from the store was the same - I'm not complaining about that)

I took some pictures: I noticed a weird ridging on this one skirt: And there's a seam down just the one side on this denim skirt, which I couldn't see on any of the other designs. However,t the edge is very not-pixelated All I can say is: GEEEEEEE

I've tested it, and it looks overall great: 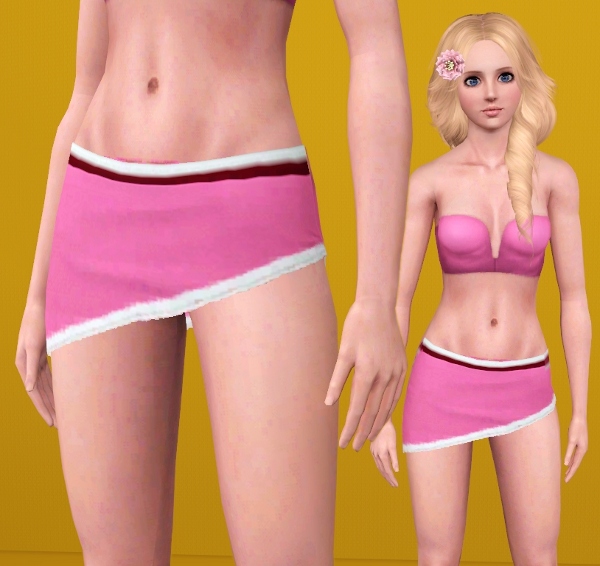 And here are some issues: 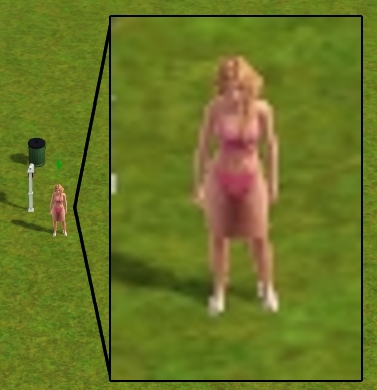 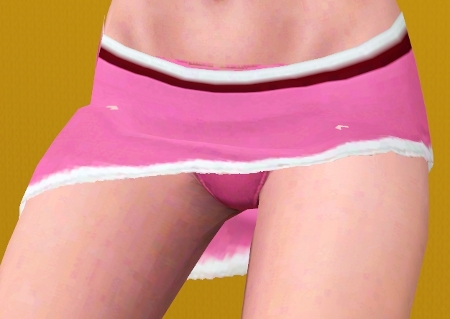 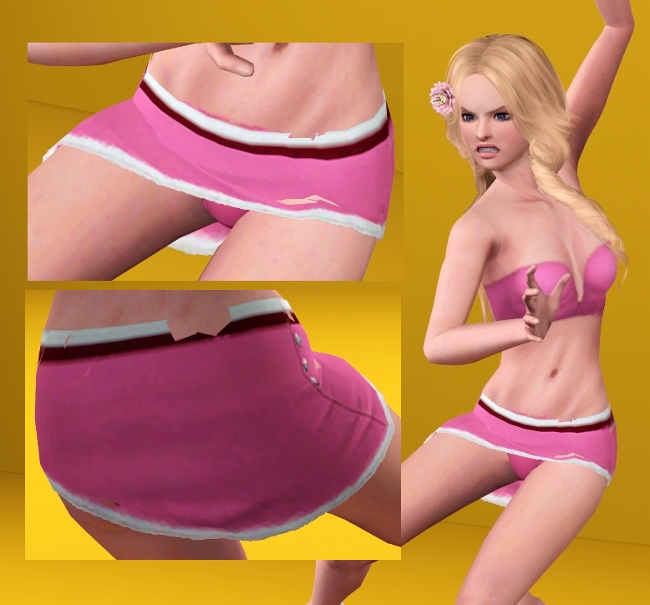 Anyway, I looooove these ^-^

PS: The textures were kinda blurry, but I guess it's the texture itself and not the UV map

It's really nice so far, but I caught a few issues when testing. First, there's clipping issues with sofas. But that's no big deal, because I checked an EA skirt, and noticed the same thing. I also noticed that in some animations, the sim's butt clips through the skirt. (All skirts but the apron one for that). Sometimes (with all but the shortest skirts) the legs go through the sides when walking. Sitting has the same clipping issue that Anubis noticed with the Cheer animation. And the martial arts animation clipping he also noticed, also occurs when running.

I didn't notice the ridging that momodoll noticed on that one skirt. But I don't have the greatest graphics card, and my settings were not turned up all the way.
Esmeralda

Wow, this is great, you've achieved an alpha-editable body mesh at last! This will add all sorts of new possibilities, thank you for experimenting with this.
BloomsBase

s3PE(latest version) has the possibility to merge packages into one,
I mergedl my packages(arround 20 of my own creations) into one.
Speeds up loading time a little.
Did the same with the skirts.

The edges were the layer is cutoff are indeed crispy, its on most skirts that are cutoff under a angle.
Material settings i found sofar only lets you edit the texture(layer) by making it either black or white, transparancy(grey) isn't supported.
The skirt texture is indeed the one from the store altho this skirt is much shorter.
The ridging is strange....

The seam on the denim skirt i need to fix!
Thank you!

Need to fix the lod3 far distance mesh if possible......if the low detail doesn't support this setup then i have a problem...

The textures are a pain.

I am on a very old comp and using a older version of photoshop.
All textures are in the correct format but i just dont get them right.

Clipping on the waist is really anoying, need to fix that!
The butt clipping i can also adjust.
Legs are pain, EA made special skirt joints for the skirts but all they do is pull the skirt to the front(or back) wich looks stupid when a sim just stands, check a default skirt.
Might need to use a boneassignements similar to the ones i did for sims 2 but its alot of work since i need to change the mesh itself also..
The clipping at the top of the thighs i cant fix....

There is a way to make this a high resolution skirt but it will work as a accesoire and i have to start from scratch then.....
Thank you guys.
BloomsBase
Sockpuppet
DELETED POST
Original Poster
9th Jul 2010 at 11:40 AM

This message has been deleted by Base1980. Reason: double post
moryrie

The legs clipping I can deal with. I think the Butt clipping is what annoys me most, but that and the waist clipping are not things that one will see very frequently. As for the walking, I've noticed the way EA made those work in the past, and .. I cannot remember the last time I had one of my sims wearing a skirt for their everyday outfit for that reason. They look all weird and stretchy. Dresses seem to work a little better, but I don't even use those that often.

But this is definitely a good start. I'm sure you'll be able to fix these up. ^^ Good luck.
emhpb

Oh dear, I completely misunderstood lol. After looking at the package, I realized that what you did with your skirt is pretty much the same thing I'm trying to do with an accessory. No luck so far though, haha.
LadyFrontbum

Omg this is awesome. I've wanted a tiered short skirt like that for AAAGES.
You have skillz <3
My blogerrific blog
Missa

I love! I have all the same problems as posted above as in the clipping and what not, but these are almost perfect! Thank you! Can't wait for the finals!
jmtmom

I loved alpha skirts for my elvish sims in sims 2. It's great to see them for sims 3.
SirDrake

How about the transparency?
Robodl95

Has everyone completely given up on this?
Hi I'm Paul!
BloomsBase

No, i have a new comp coming so i might pickup creating again

Just wondering, what object did you clone to do this? Or is it a material you can choose in tsrw, like when making something glass?
My Sims 3 Blog My TSR
BloomsBase

srry, missed this your post.
You can use the stores hulaskirt for all necesarry settings.

I thought i pulled this off with CTU also but its been a while.
If you are going to use CTU make sure to start with the teen formal wich has 2 meshgroups.(red dress)
The teens have transparancy enabled by default, adults not.
You have to add the the transparancy map manually to the package then and change all meshcomments(embeddedtype and below) into the one as the hula skirt.

Didn't release it yet as the low detail doesn't support alpha edits...

I hate to keep asking about this pareo I'm converting to an accessory, but I was wondering if you ever solved the transparency issue? I'm using a transparent mesh as well as grayscales on the multiplier alpha, but the skirt is still totally opaque. If I leave the settings to 4 color channels, I can use the cloned WA necklace and get all my textures and meshes to show up on all 3 LOD's. If I can get the transparency to work, I'll have this thing done exactly how I want it!
BloomsBase

As you can see this is a very old thread so we didn't know about the diffrent shaders avai;able.
This skirt uses a shader of a STORE(hulaskirt) outfit wich does not not support transparancy.
As far as i know only the CASHairsimSimple shader supports transparancy(as in Cmar's tutorial)
So you need to change your shader on the necklace file to get the transparaqncy working
ClarkDavis
Test Subject
#24

Hi!
Great work. I totally envy you. i tried to do the same but somehow ended up with the texture of the skirt being shown on the legs too...
If you have a hint or could mention what tutorials you prefer, please tell me :-)

Edit: Got help. Cmar came to the rescue. Of course there was the texture *duh*
ClarkDavis
Test Subject
#25

Hello Bloom, I read all there is from you and Cmar and cmomoney (and probably understood most of it wrong, if at all

) but how did you do it?
I mean did you primarliy follow Cmars tutorial for transparent clothing meshes ? You metion that you started off with the hoola base mesh, because it has two mesh groups. I thought in the tutorial we are adding the second mesh group via CTU.
What would you do differently today?

best regards
Xan-Kun
Back to top