by Nysha Posted 21st May 2014 at 3:59 AM - Updated 21st May 2014 at 4:18 AM by Nysha
11 Comments / replies (Who?) - 5 Feedback Posts, 6 Thanks Posts
This is a new mesh, and means that it's a brand new self contained object that usually does not require a specific Expansion pack (although this is possible depending on the type). It may have Recolours hosted on MTS - check below the description for more information.
I love downloading 3t2 EA hair meshes - they tend to look pretty good, and they're usually nice and low poly, which is lovely. Unfortunately, a lot of them have transparency issues. Some of those issues are just sort of irritating every now and then, and some of them are more serious than that - so I've worked out how to fix the transparency issues, without breaking all existing recolours of the mesh.

The first mesh I've successfully opacified, largely by luck of the draw, is the wonderful Mel / Rented-Space's 3t2 EP9 Braided Bun! See below for the before and afters.

I also tweaked the hairline a bit to fit TS2 scalps better, because I'm picky like that, and once I'd seen a gap I couldn't rest until I'd squished it into oblivion. 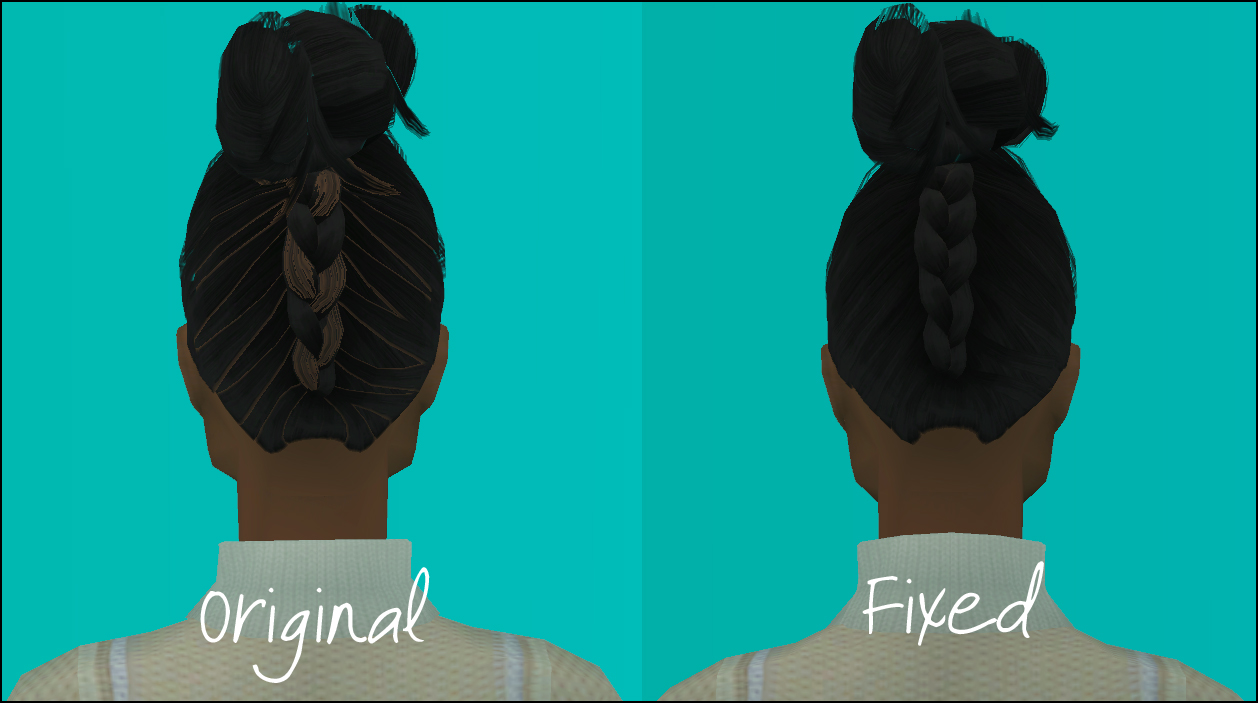 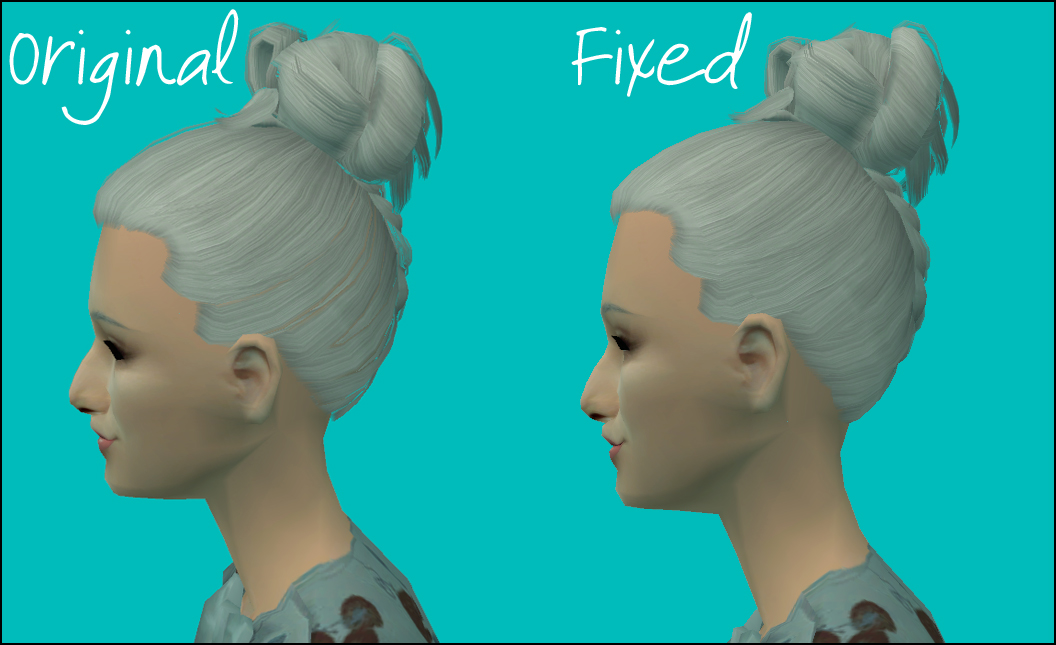 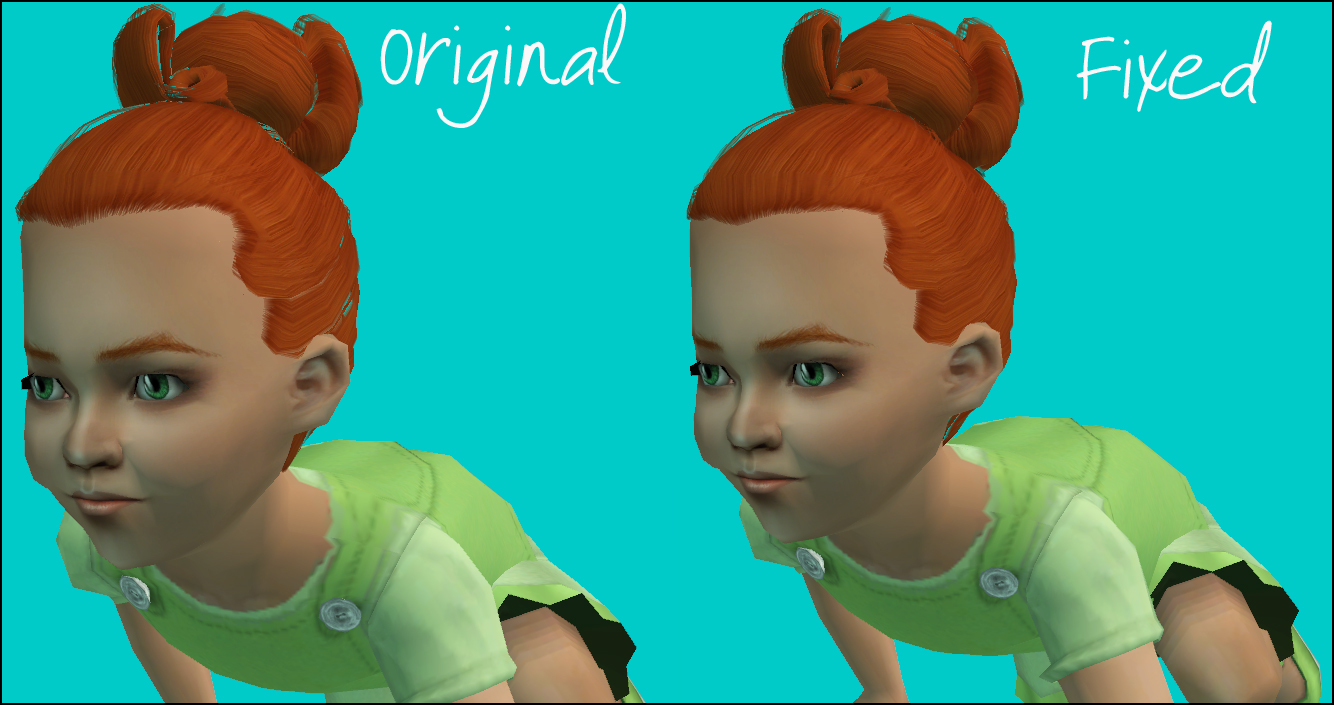 If you already have Mel's original mesh, delete it and replace it with this file. If you don't already have the original, you will need to download some recolours, as this file ONLY contains the mesh. You can get Mel's original textures here; the textures in my pics are by selenaq, available here. Any other retextures of Mel's mesh that you may find will also work with this version.

This hair, just like the original, is enabled for all ages, female only. And another note: you need to download recolours separately! From someone else!

Additional Credits:
Many thanks to pinhead, whose info on model names and opacity values helped me work out how to get fixed meshes working with existing retextures. And of course to the lovely Mel for making the hair in the first place, and she bears absolutely no responsibility for the transparency issues since, as I have only just realised, apparently they don't show up in her game for some reason. :D
Tags: #hair, #3t2, #mel, #rented-space, #fix, #braided bun, #university life, #UL

Back to download view
11 Comments / Replies (Who?) - 4 Feedback Posts, 6 Thanks Posts
Hide Thanks Posts for this thread (Show only feedback)
Melodyway17

Here and back and then again... rinse, lather, repeat...
Just_Tweens
Lab Assistant
THANKS POST

excuse me... this came with sims 3 university life... I love it! i always wanted to have that hair in sims 2 hit the crap outta dat download button
AlfredAskew
Field Researcher
THANKS POST

You learned to fix the transparency problem? You're a wizard!
If you care to share the knowledge, I know quite a few creators who would love to help fix these things.
Thanks so much!
Queen of France
Lab Assistant
THANKS POST

Ooooh, wonderful! I love 3t2 hairs, but the opacity issues are oftne a dealbreaker for me. Would you maybe consider writing a tutorial on how to do it? c:
Nysha

Yep, I'll be writing a tutorial shortly. I just need to remember how I did one of the steps, because it was a while ago.

What I lack in decorum, I make up for with an absence of tact.
PenelopeT
Theorist
THANKS POST

Thank you for this!

Can't wait for the turtorial - Made some hair conversions myself, still dealing with transparancy issues. Lovely hair, by the way

Quote:
Any chance you posted that somewhere? I'm pretty darn curious what's up with these transparencies.
Nysha

I didn't, 'cause, well... it turned out to be more complex than I thought. :P

It's basically the same as TS3 hairs: the vertices have to be in the right order. You can see in Milkshape, by applying a texture, whether or not your hair is gonna have transparency issues.

The problem is that to fix issues for TS2 hairs, you need to change the order of the groups so that the "lowest" group (the one which is underneath everything else) has the lowest alpha value (e.g. it's hair_alpha1), next one out is hair_alpha3 and so on. But splitting a TS3 mesh into groups is a gigantic pain in the arse. I use UniMesh Make Smoothing groups in Milkshape, which works for some hairs but chokes on very complex ones. Mel/rented-space uses a Blender feature I think, I don't know if it's better at complex shapes than UniMesh, but I'm sure she'd explain if you asked on her tumblr.

And of course, once you've split your mesh into a bazillionty groups, you then have to reconcile it down to a more sensible number of groups, which can be tricky when you have lots of overlapping mesh parts, and just... argh!
What I lack in decorum, I make up for with an absence of tact.
telefen
Forum Resident
#11

Nice jobb fixing this hair. I was just about to delete it. Thank you very much.

Thank you so much! I've seen this hair in legacys of Sims 3 and now I can have it in The Sims 2 *o*